The bitter dispute between Warsaw and Minsk dramatically escalated last night when Belarusian troops ripped up the border fence and prevented Polish soldiers from rebuilding it.

Film footage released this morning by Poland’s Border Force reveals how its troops were blinded by lasers and strobe lights as they tried to shore up the frontier.

Hours earlier Belarus forces had destroyed part of the 120 miles of barbed wire fencing that separates the east European states.

Migrants were also armed with tear gas by the Belarus military to attack Polish forces once they got across the border.

The incursion occurred near the town of Czeremcha which has seen hundreds of migrants pass through the frontier in recent weeks. 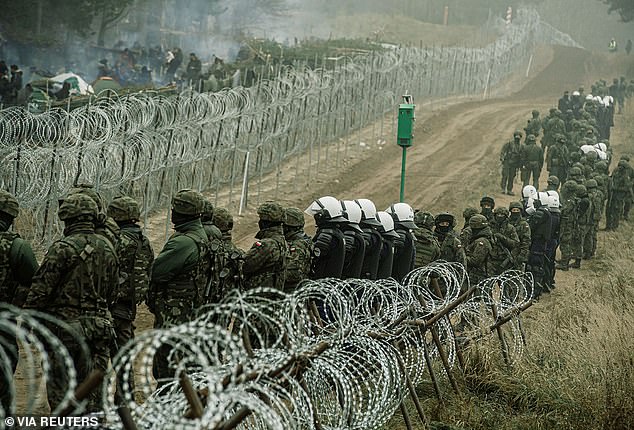 Plish soldiers and police watch migrants at the Poland/Belarus border near Kuznica, Poland, in this photograph released by the Territorial Defence Forces, November 12, 2021. The bitter dispute between Warsaw and Minsk dramatically escalated last night when Belarusian troops ripped up the border fence and prevented Polish soldiers from rebuilding it

The soldiers were carrying out the orders of their Minsk dictator leader Alexander Lukashenko to help migrants across the border to destabilise the EU.

A spokesman for the Polish Border Force told MailOnline: ‘Last night near Czeremcha, Belarusian soldiers began to destroy the temporary border by tearing up fence posts. ‘Polish forces were blinded by laser beams and strobe light.

‘Also, a group of about 100 migrants were to cross and Poland says Belarusians gave them tear gas, which was used against the Polish forces.’

Thousands of migrants from the Middle East are sheltering in freezing conditions on the border between Belarus and EU states Poland and Lithuania, which are refusing to let them cross. Some have already died and there are fears for the safety of the rest as bitter winter conditions settle in.

The death brings to 11 the number of migrants found dead on both sides since the crisis began in the summer, according to aid groups. 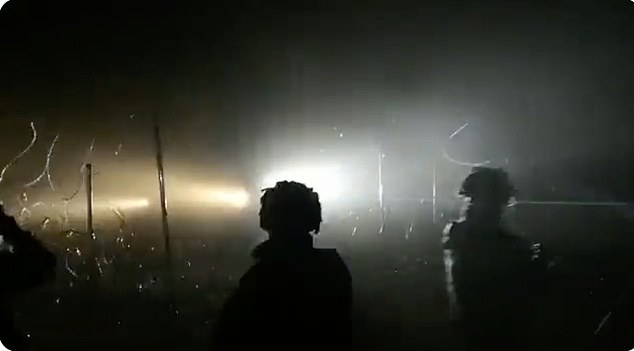 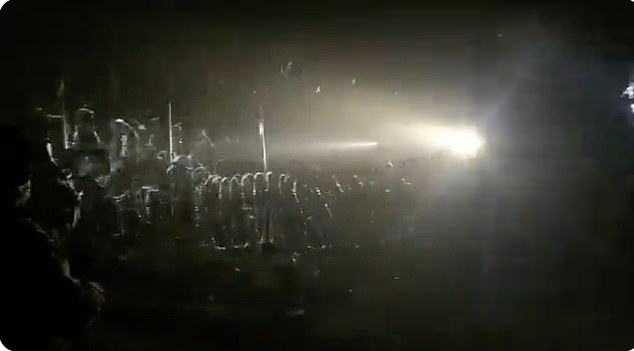 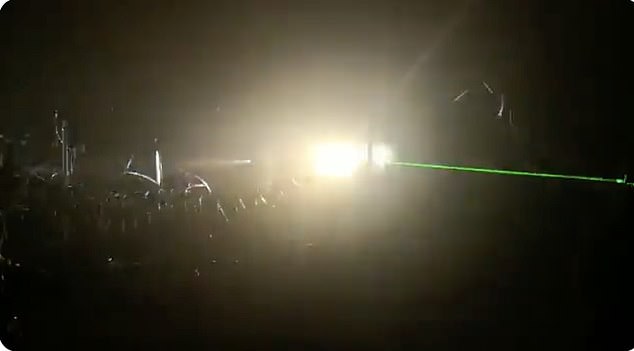 Pictured: A grab from a video showing a green laser is shone through a barbed wire fence 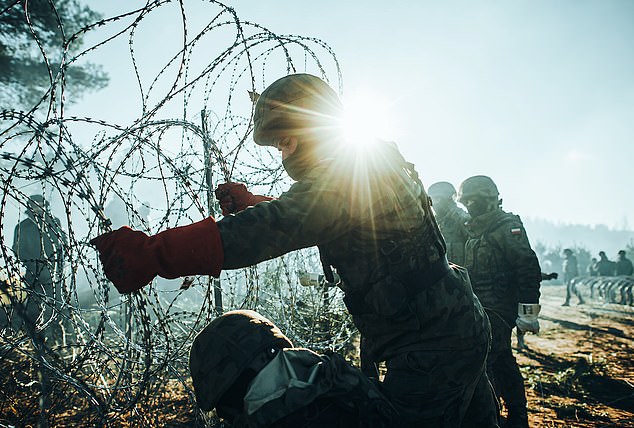 Polish army have erected 180 kilometres of barber wire fencing (pictured) across the border with Belarus. Pictures from Poland Ministry of Defence

‘Yesterday, in the woods, near the border, near Wolka Terechowska, the body of a young Syrian man was found,’ Podlaska Police said on Twitter.

The police said they had been unable to determine the cause of death at the scene.

The discovery comes amid mounting international tension over the crisis, with neighbours of Belarus warning the situation could escalate into a military conflict and U.S. President Joe Biden expressing his concern.

Polish border guards estimate there are currently up to 4,000 migrants camped out along the border.

Belarus said on Saturday that the number of migrants arriving at a makeshift camp on the border was growing daily, and that a group of up to 100 had crossed into Polish territory.

‘There’s a group (of migrants) close to the crossing point… They are indeed on Polish territory. Up to 100 people,’ the RIA news agency quoted the Belarusian state border committee as saying.

The Polish Border Guard said Belarusian soldiers had torn up a section of the temporary fence erected by Poland to deter migrants during the night. 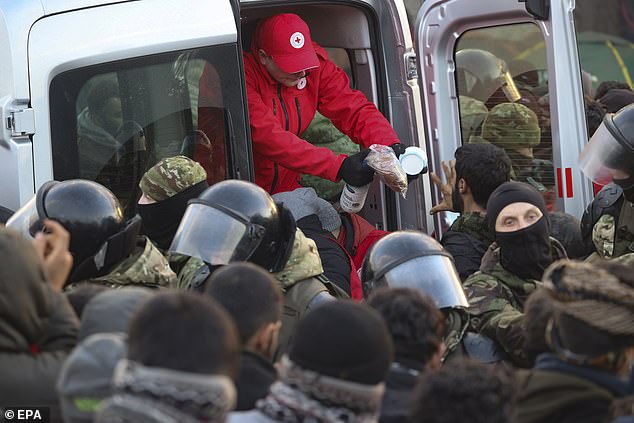 Belarusian Red Cross worker and military distribute food for asylum-seekers, refugees and migrants who gather at the Belarus-Polish border in the Grodno region, not far from the checkpoint Bruzgi, Belarus, 12 November 2021 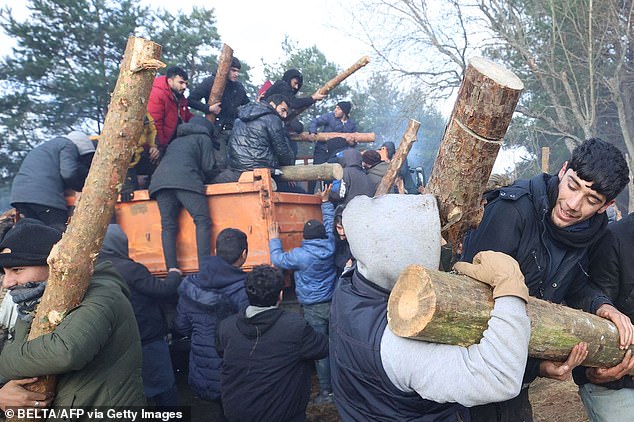 Migrants unload a truck with tree trunks delivered by the Belarusian officials in a camp on the Belarusian-Polish border in the Grodno region on November 12, 2021

Russian President Vladimir Putin, a key ally of Belarusian President Alexander Lukashenko, said Belarus has nothing to do with the migrant crisis.

On Saturday, Polish Interior Minister Mariusz Kaminski told private broadcaster RMF FM he would meet U.S. Director of National Intelligence Avril Haines to discuss the situation next week. He said around 1,500 people were camped at the border and that this number was growing.

Poland, Austria, Lithuania, Latvia and Estonia have asked international aid organizations to organise humanitarian and medical assistance in Belarus to ‘avoid tragedies and prevent (a) humanitarian crisis’ at the Polish border.

The Polish Border Guard said there were 219 attempts to illegally cross the border on Friday. The Lithuanian border guard says 144 migrants attempted to enter on Friday.

Speaking on Saturday, Russian President Vladimir Putin said Russia has nothing to do with the migrant crisis on the Belarus-Poland border.

‘I want everyone to know. We have nothing to do with it,’ he said in an interview with state broadcaster Vesti, after Poland and other Western critics accused Moscow of working with Minsk to send thousands of migrants to the EU border.

Putin said European leaders needed to talk to Belarusian President Alexander Lukashenko if they want to resolve the crisis, which has left hundreds of migrants, mainly from the Middle East, trapped on the border. 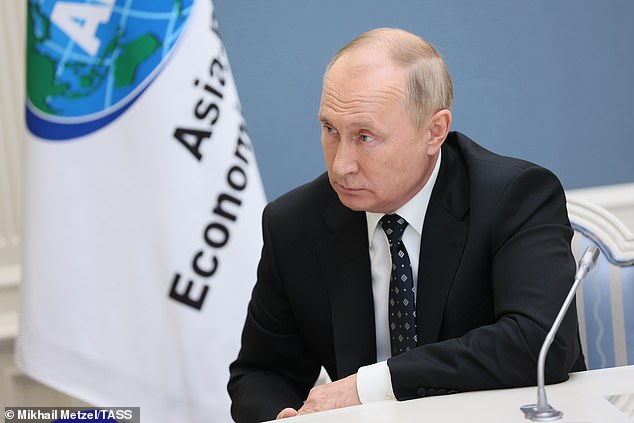 ‘As I understand it, Alexander Lukashenko and (German Chancellor Angela) Merkel are ready to talk to each other,’ Putin said.

‘I hope this will happen in the near future – this is most important.’

He again blamed the West for the crisis, saying its policies in the Middle East were the reasons migrants wanted to go to Europe in the first place.

‘We should not forget where these crises associated with migrants came from. What, is Belarus the cause of these problems or something?’ Putin said.

‘No, these reasons were created by Western countries themselves, including European countries. They are political, military and economic in nature.’

Putin also said on Saturday that Moscow considered recent Black Sea exercises by US and other NATO ships as a serious challenge.

‘The United States and its allies in NATO are carrying out unplanned exercises in the Black Sea. Not only is a rather powerful naval group involved in these exercises, but also aviation, including strategic aviation. This is a serious challenge for us,’ he said in an interview with state broadcaster Vesti.

Lukashenko wants payback for EU sanctions and Putin enjoys mischief: Why Belarus and Russia are causing chaos in Europe

What is behind the crisis?

Belarus was rocked by months of massive protests following the August 2020 election that gave authoritarian President Alexander Lukashenko a sixth term in office. The opposition and the West rejected the result as a sham.

Belarusian authorities responded to the demonstrations with a fierce crackdown that saw more than 35,000 people arrested and thousands beaten by police.

The European Union and the U.S. reacted by imposing sanctions on Lukashenko’s government.

Those restrictions were toughened after an incident in May when a passenger jet flying from Greece to Lithuania was diverted by Belarus to Minsk, where authorities arrested dissident journalist Roman Pratasevich.

The EU called it air piracy and barred Belarusian carriers from its skies and cut imports of the country’s top commodities, including petroleum products and potash, an ingredient in fertilizer.

A furious Lukashenko shot back by saying he would no longer abide by an agreement to stem illegal migration, arguing that the EU sanctions deprived his government of funds needed to contain flows of migrants.

Planes carrying migrants from Iraq, Syria and other countries began arriving in Belarus, and they soon headed for the borders with Poland, Lithuania and Latvia.

Pavel Latushka, a member of the Belarusian opposition, claimed that state-controlled tourist agencies were involved in offering visa support to migrants and helping them drive to the border.

The EU accused Lukashenko of using the migrants as pawns in a ‘hybrid attack’ against the 27-nation bloc in retaliation for the sanctions. Lukashenko denies encouraging the flow of migrants and said the EU is violating migrants’ rights by denying them safe passage.

What has been the response by EU countries?

During the summer, Lithuania introduced a state of emergency to deal with an influx of migrants and strengthen its border with Belarus. It set up tent camps to accommodate the growing number of migrants.

In previous months, small groups of asylum-seekers tried to sneak into Lithuania, Poland and Latvia at night, using forest paths away from populated areas.

This week, much larger groups gathered openly at the Polish border, and some people used shovels and wire cutters to try to break through a razor-wire fence at Poland’s border.

Authorities in Warsaw estimated the crowds at about 3,000-4,000 and said they prevented hundreds of people from entering the country.

Poland deployed riot police and other forces to bolster the border guards. Eight deaths have been confirmed at the Belarus-Poland border,, and temperatures have fallen below freezing at night.

The EU has made a strong show of solidarity with Poland, Lithuania and Latvia. EU officials are expected to discuss another round of sanctions against Belarus, and European Council President Charles Michel said for the first time that the bloc would consider the possibility of financing ‘physical infrastructure’ such as barriers or fences on the border.

What is Russia’s role?

Belarus has received strong support from its main ally, Russia, which has helped buttress Lukashenko’s government with loans and political support.

Russian Foreign Minister Sergey Lavrov said the migrants flows resulted from the U.S.-led wars in Iraq and Afghanistan and Western-backed Arab Spring uprisings in the Middle East and North Africa.

He challenged the EU to offer financial assistance to Belarus to deal with the influx.

At the same time, the Kremlin angrily rejected Poland’s claim that Russia bears responsibility for the crisis.

Usau said Russia could step in as a mediator in the hope of improving ties with Germany and other EU nations.

Belarusian, Pola, tear, troops, up
You may also like: