Follow
Home » World News » Beware troublemakers: Victorians urged to look out for each other on NYE

Beware troublemakers: Victorians urged to look out for each other on NYE

Victoria Police will be out in force across the state this New Year’s Eve, with thousands of officers on patrol, and additional search powers to target anyone carrying weapons.

The thousands of officers, which include those on general duties and in specialist units, will be deployed to patrol Melbourne’s CBD, regional centres, and key holiday destinations as revellers bring in 2022.

Locations on the foreshore will be a focus for the force, with severe heatwave conditions anticipated from New Year’s Eve for most of the state, right through to January 2.

Bureau of Meteorology senior forecaster Keris Arndt warned Victorians on Wednesday to heed any fire danger ratings from the bureau, as well as the Country Fire Authority, Fire Rescue Victoria, and other emergency services.

“They will be busy over this time of year as they often are, and [the heat is] definitely going to exacerbate things,” Mr Arndt said.

Melbourne is predicted to reach a top of 38 degrees on New Year’s Eve, and forecasters are also predicting scorching temperatures for the rest of the state: 37 degrees at Geelong and the Surf Coast, 35 on the Mornington Peninsula, 37 at Bendigo, 35 at Ballarat, and 38 at Shepparton. 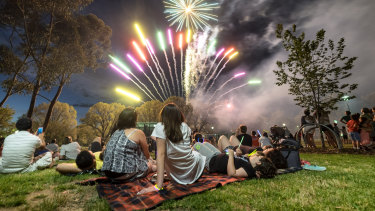 It should be even hotter on New Year’s Day, with the state’s far north-west – particularly the Mildura to Hopetoun area – likely to be hit by temperatures hanging around the low 40s, possibly up to 43 degrees.

Melbourne is forecast to reach 36 degrees on New Year’s Day, while Geelong and the Surf Coast are slated to hit 35.

The Mornington Peninsula is set to reach 33 degrees, while a high of 38 is expected in Bendigo, 35 in Ballarat, and 39 in Shepparton.

Victoria Police said in a statement on Thursday that several locations had been declared “designated areas” under the Control of Weapons Act, which gave officers extra search powers.

The highly trained critical incident response team would also patrol the CBD, inner-city, and “places of mass gatherings ready to respond to any incidents that may arise” on New Year’s Eve.

Deputy Commissioner Rick Nugent said Victorians should be sure to look out for themselves and others as they celebrated the New Year.

“Everyone needs to be aware of their own personal responsibility to look after themselves and others this New Year’s Eve. We know excessive drinking and use of illicit drugs can lead to devastating consequences including violent crime, serious assault, anti-social behaviour and road trauma,” he said.

“If you are planning to come into the city or celebrations anywhere in the state to cause trouble – don’t. You will be arrested and held to account.”

Following on from WorkSafe’s reminder on Wednesday for people to stay away from unauthorised fireworks displays in the New Year, Victoria Police warned anyone caught using fireworks could face up to 15 years’ jail and substantial fines.

Melbourne lord mayor Sally Capp confirmed on Wednesday that one of its flagship New Year’s Eve shows, the “drone swarm”, would no longer form part of the city’s program on Friday because of COVID-related freight and logistics challenges.