Billionaires, big tech and the emerging divide over climate action

You might think that the decision of Bill Gates to throw his resources, energy and intellect into the infernal problem of climate change would be universally welcomed by those who have been battling the issue for a generation. 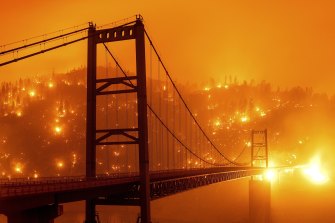 Embers light up a hillside behind the Bidwell Bar Bridge as the Bear Fire burns in Oroville, California during America’s deadly 2020 fire season.Credit:Noah Berger

This week’s publication of Gates’ new book, How to Avoid a Climate Disaster, has revealed an intellectual and philosophical schism in the climate field, one most pronounced between those who have battled in the field for a generation, and newer entrants like Gates.

In his book Gates does an admirable job in breaking down the complex problem of climate change into understandable building blocks.

“When I started learning about climate change, I kept encountering facts that were hard to get my head around,” he writes. “For one thing, the numbers were so large they were hard to picture … Another problem was that the data I was seeing often appeared devoid of any context.”

Gates provides the context, explaining that reaching net zero by 2050 to avoid the worst impacts of climate change means working out how to reduce greenhouse gas emissions by 50 billion tonnes annually.

Gates breaks the figure down further, explaining that 31 per cent of the emissions are caused by making things such as steel, cement and plastic, electricity production causes another 27 per cent and agriculture 19 per cent. Transport and heating and cooling cause another 16 per cent and seven per cent respectively.

With the impact of climate change tangibly evident in recent record temperatures, in catastrophic fires in the American west and in Australia, no one would argue with Gates’ analysis, nor with his new sense of urgency.

“We have no time to lose,” he told Good Weekend.

However, Gates is being criticised by some of the world’s leading climate scientists and environmentalists for his view on how we should use what time we have left to act, and how best to direct resources.

Gates argues that American policymakers should dedicate their efforts to research and development of new technologies to drive down what he calls “the green premium”. This premium, he explains, is how much more it costs people to use a green alternative over an existing technology – the price difference between, say environmental fuel for his jet versus conventional jet fuel.

In a tetchy rejoinder in The New York Times this week the renowned climate author and journalist Bill McKibben begins, “First things first — much respect to Bill Gates for his membership in the select club of ultra-billionaires not actively attempting to flee Earth and colonise Mars.”

He goes on to argue that Gates makes the common mistake of underestimating the tools we already have to hand to reduce emissions. Solar power is the cheapest power in human history according to the International Energy Agency. As factories producing solar panels have become more efficient, their drop in price over the past decade has been, McKibben points out, 50 to 100 years ahead of what the IEA was forecasting in 2010.

According to McKibben, every time we double the number of panels installed, the price drops another 30 to 40 per cent. Batteries, he says, are following a similar price curve.

Underestimating the potential of existing renewable technology, he says, leads Gates to overestimate the significance of the green premium. He argues that the future tech Gates wants the world to focus on will be critical in future in mopping up the last few percentage points of greenhouse gasses, while renewables must do heavy lifting now.

At the heart of some of the criticism of the efforts of Gates – and other billionaires – in the climate field is their support for what is known as carbon dioxide removal, or CDR, technologies.

In theory if effective CDR machines could remove and store enough carbon, climate change could be solved by technical innovation.

CDR’s critics dismiss it as fantastical at best and dangerous at worst, as it provides an excuse for inaction.

Speaking with the Herald earlier this week the leading climate scientist Professor Michael Mann – whose book The New Climate War has also just been published – was blunt in his criticism of Gates’ approach.

“We don’t need new magic new technology, like Bill Gates says [we do], we don’t need a miracle. We have the tools necessary, with wind and solar, geothermal et cetera, to decarbonise our economy. It is a pretty clear path forward.”

Have a Good Weekend all week

We deliver the best of Good Weekend to your inbox so it’s there when you’re ready to read. Sign up here. Sent every Saturday.

And, big, Billionaires, Tech, the
You may also like: