The ‘extremely fit’ actor complained of chest pain during a gym workout around 11am this morning and was seen by a doctor who diagnosed him with an acute heart attack.

He was immediately taken to Vikram Hospital in Bengaluru, the capital of southern Karnataka state, where he arrived ‘unresponsive’ and was later pronounced dead at 2.30pm.

He is survived by his wife Ashwini Revanth, who he married in 1999, and their two teenage daughters, Drithi and Vandhitha. 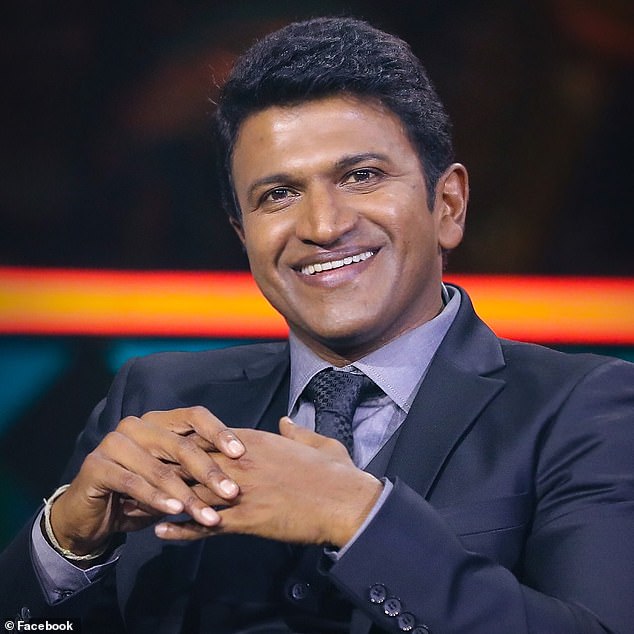 Bollywood star Puneeth Rajkumar, 46, (pictured) died of a massive heart attack on Friday after suffering chest pains during a gym workout, sparking a wave of mourning across India

Rajkumar was a dashing lead actor in 29 movies and also appeared on television, where he was the host of India’s version of ‘Who Wants to be a Millionaire.’

Following the news that he had been transferred to hospital, a large crowd gathered outside the hospital in Bengaluru as news of his heart attack spread in the city.

Dr. Ranganath Nayak, a cardiologist at the hospital, said in a statement that Rajkumar was unresponsive and his heart had ceased beating when he arrived.

‘Mr Puneeth Rajkumar was an extremely fit 46-year-old gentleman. This morning, after his routine exercise, he complained of chest pain and was taken to his family doctor where he was diagnosed with an acute heart attack and he was immediately referred to our hospital for further management.

‘On arrival at our hospital, Mr. Puneeth Rajkumar was non-responsive and his heart had stopped – this is called Cardiac Asystole.’ 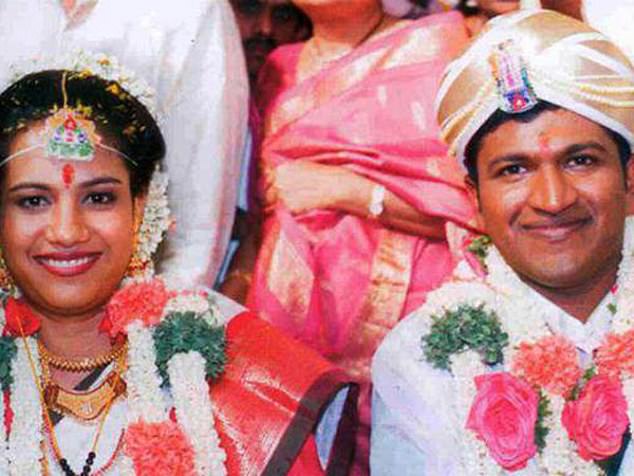 The popular Indian actor is survived by his wife Ashwini Revanth, who he married in 1999, (pictured together) and their two teenage daughters, Drithi and Vandhitha 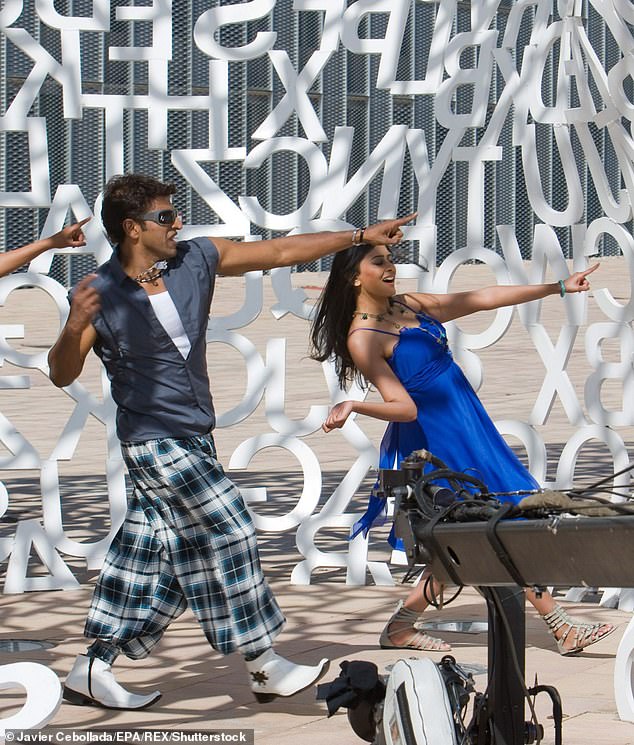 Rajkumar was a lead actor in 29 movies and also appeared on television, where he was the host of India’s version of ‘Who Wants to be a Millionaire’ (pictured on the set of Anna Bond in 2012)

Despite prolonged attempts at resuscitation from a panel of medical experts, the actor remained in a non-responsive state and his heart refused to pick up. He was declared dead at 2.30pm.

‘A cruel twist of fate has snatched away from us a prolific and talented actor, Puneeth Rajkumar. This was no age to go,’ the Indian premier said in a tweet.

‘The coming generations will remember him fondly for his works and wonderful personality. Condolences to his family and admirers. Om Shanti.’ 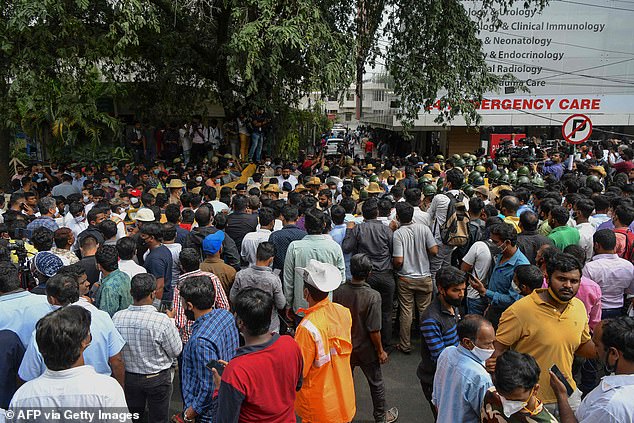 Rajkumar was taken to Vikram Hospital in Bengaluru, the capital of southern Karnataka state, where he arrived ‘unresponsive’ and was later pronounced dead at 2.30pm. Pictured: A large crowd gathered outside the hospital as news of the actor’s heart attack spread in the city

Offices and shops in India’s tech capital of Bengaluru shut down on Friday and police were brought in to control swarming crowds of fans in anticipation of violence after the actor’s death.

Television channels showed crowds of fans swarming toward the hospital where he was being treated, and police were out in force trying to control them.

Film stars are revered in India, almost obsessively and even natural deaths of movie stars have led to violent turmoil in the past as distraught fans try to come to terms with the death of their idol.

While malls were open, several cinema halls across Bangalore closed for the day and stopped screening movies in the city. Several popular pubs across the city also closed down after news of Rajkumar’s death came in. 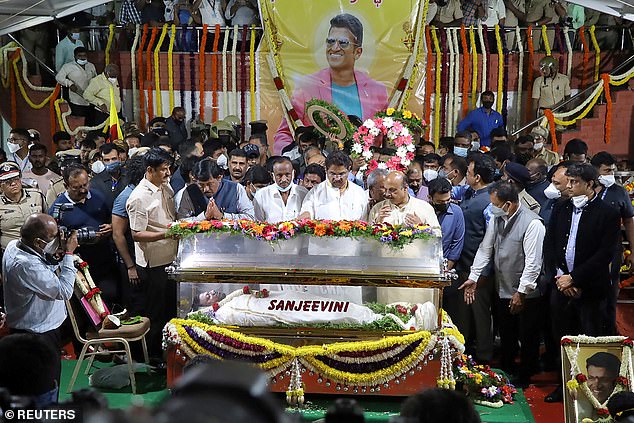 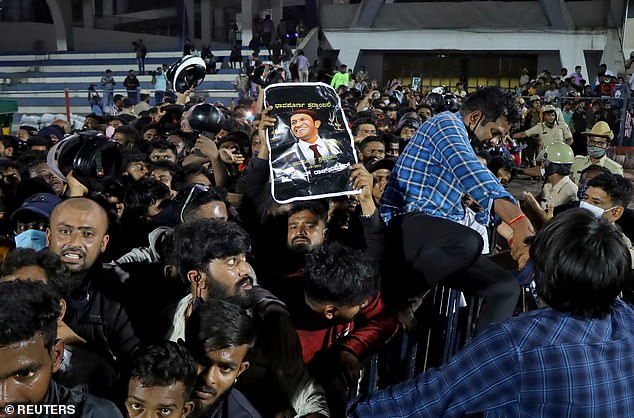 India’s biggest IT services firm, Tata Consultancy Services , sent its employees an advisory around 3pm local time, asking them to go home early, an employee at one of its Bengaluru offices told Reuters.

Other tech firms said they were monitoring the situation in the city. Accounting firm KPMG had asked employees to leave for home, an employee in the Bengaluru office told Reuters.

‘I pray to the people of the state to do his last rites with respect, please be peaceful and allow the family to mourn in peace,’ the chief minister of Karnataka state, Basavraj Bommai, told a news conference minutes after the actor’s death was announced.

His body will be kept at Kanteerava Stadium in Bengaluru for people to pay their respects to the actor.

He was the son of Rajkumar, the biggest movie star in southern India, but carved a career for himself.

After acting as a child in several movies, he debuted as a lead actor a 2002 Kannada-language movie, ‘Appu.’ He followed that with other successful films including ‘Abhi,’ ‘Veera Kannadiga,’ ‘Maurya,,’ ‘Ajay’ and ‘Arasu.’