Bombs sent to Ukrainian embassy and weapon factory may be linked

Police in Spain are examining a possible link between two letter bombs sent to the Ukrainian ambassador in Madrid and to an arms company that manufactures rocket launchers donated to Kyiv, they confirmed in a statement on Wednesday.

In the first incident, an officer at Ukraine’s embassy in Madrid was hospitalised after he opened a letter bomb addressed to the ambassador on Wednesday, prompting Kyiv to order greater security at all its representative offices abroad.

Spanish police activated their anti-terror protocol and cordoned off the area around the embassy, with police bomb disposal experts also at the scene with sniffer dogs.

Ambassador Serhii Pohoreltsev told the Ukrainian news site European Pravda that the suspicious package addressed to him was handed to the embassy’s commandant, a Ukrainian staff member. 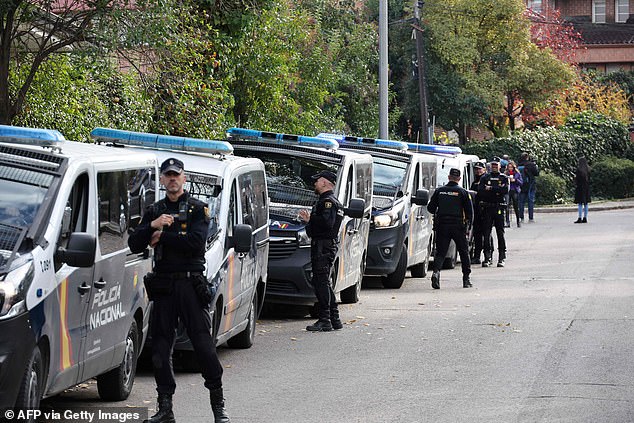 Spanish policemen secure the area after a letter bomb explosion at the Ukraine’s embassy in Madrid on November 30, 2022 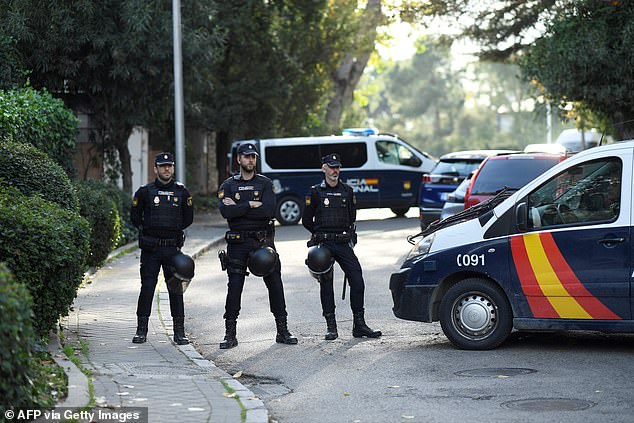 Spanish policemen block the street after a letter bomb explosion at the Ukraine’s embassy in Madrid on November 30, 2022

‘The package contained a box, which raised the commandant’s suspicions and he decided to take it outside – with no-one in the vicinity – and open it,’ Pohoreltsev was quoted as saying.

‘After opening the box and hearing a click that followed, he tossed it and then heard the explosion…Despite not holding the box at the time of the explosion, the commandant hurt his hands and received a concussion.’

A spokesperson for Ukrainian Foreign Minister Dmytro Kuleba added in a statement that the employee’s life was not at risk, while a Spanish government official said later that the officer had only suffered ‘a very small wound’ on one finger.

The company, Instalaza, manufactures the C90 rocket-propelled grenade launcher, which Spain has been donating to Ukraine amid its ongoing war against Russia. 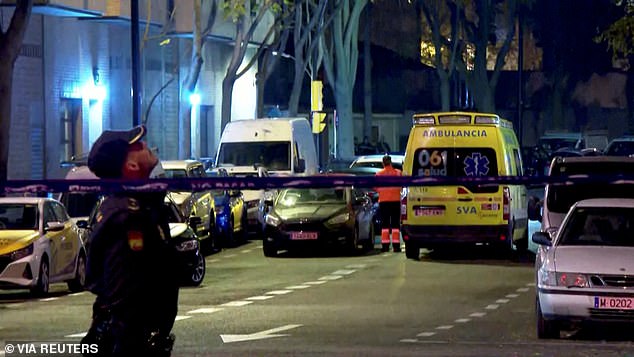 A police officer stands near an ambulance at a cordon outside an arms company’s building after it received a letter bomb in Zaragoza, Spain, on November 30, 2022 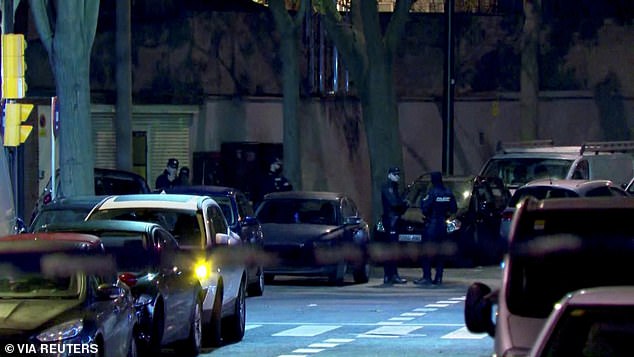 Police officers stand behind a cordon outside an arms company’s building after it received a letter bomb in Zaragoza, Spain, on November 30, 2022 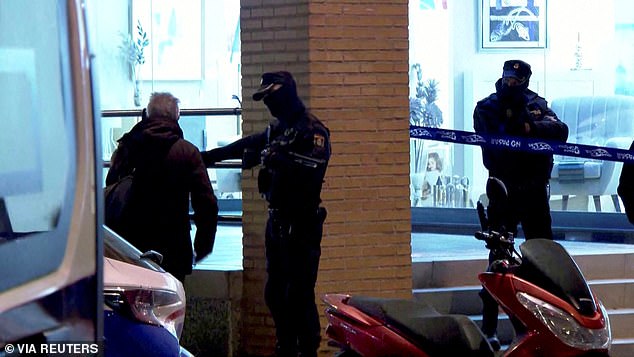 A police officer directs a man away from a cordon outside an arms company’s building after it received a letter bomb in Zaragoza, Spain, November 30, 2022

Rosa Serrano, a government representative in Zaragoza, told the radio station SER that the two envelopes appeared to have the same sender, since the same email address was written on the back of both of them.

Ms Serrano added that the envelope the arms company received appeared to have come from Ukraine, which aroused its suspicion.

The residential area surrounding the embassy in northwestern Madrid was cordoned off and a bomb disposal unit was deployed to the scene, as well as the area around the Zaragoza factory.

Police carried out a contained explosion in the factory and no injuries or damage have been reported.

The envelope that was sent to Zaragoza was X-rayed before being detonated, showing an explosive charge with a wire line ready to be activated when the envelope was opened, Ms Serrano said.

Ambassador Pohoreltsev later told Spanish TV network TVE later that he was working as usual at the embassy ‘with no fear’.

‘We have instructions from the ministry in Ukraine that given the situation we have to be prepared for any kind of incident… any kind of Russian activities outside the country,’ he said.

The Ukrainian government did not immediately respond to a request for comment about the second incident. 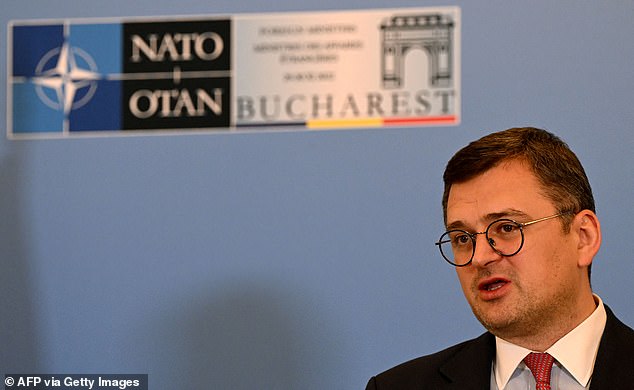 Ukraine’s Foreign Minister Dmytro Kuleba gives a press statement at the end of a meeting of the NATO Ministers of Foreign Affairs in Bucharest, Romania, on November 30, 2022 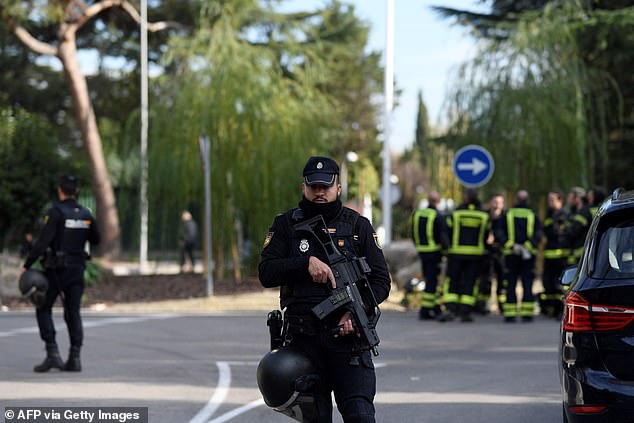 A Spanish policeman stands next to firefighters while securing the area after a letter bomb explosion at the Ukraine’s embassy in Madrid on November 30, 2022 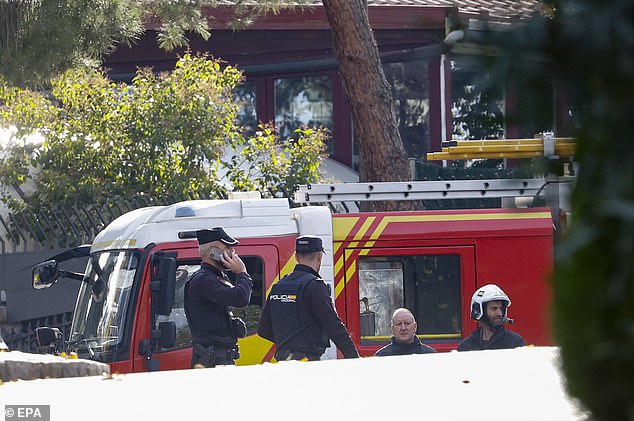 Police agents and firemen are seen at the entrance to the Ukranian Embassy in Madrid, Spain, 30 November 2022

Speaking about the first incident, Ukrainian Foreign Minister Dmytro Kuleba said:  ‘Whoever is behind this explosion, they will not succeed in intimidating Ukrainian diplomats or stopping their daily work to strengthen Ukraine and to counter Russian aggression.’

The minister also urged his Spanish counterparts to take urgent measures to investigate the attack.

Spain’s High Court has opened a probe into the attacks as a possible case of terrorism, a judicial source said.

A judge at Spain’s Audiencia Nacional court, which deals with terrorist investigations, will oversee the probe launched as a result of yesterday’s initial explosion.