The Border Force intercepted the first group migrants to cross the Channel this year, while the French coastguard prevented a further 80 from reaching the UK.

A Border Force vessel intercepted the 44 asylum seekers from one boat off the coast of Dover, Kent, at around 2pm yesterday.

The migrants could be seen wrapped in hats, blankets and warm clothing after battling cold conditions at sea – with one woman wearing a grey dressing gown.

They were escorted off the ship by UK officials in high-vis vests to be taken for processing.

On the same day, the French coastguard prevented a further 80 asylum seekers from reaching the UK. 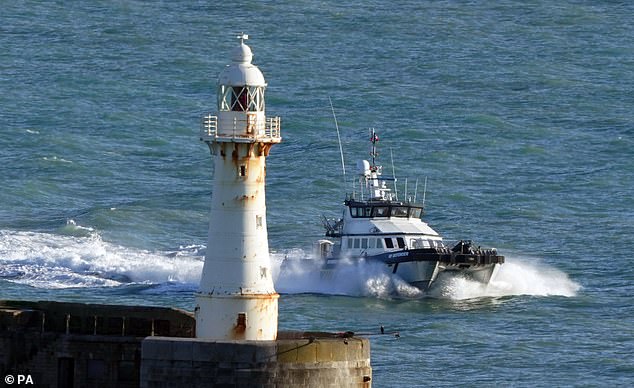 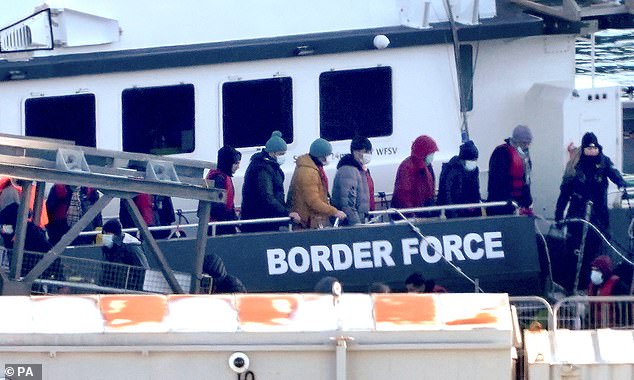 In the early hours of January 2, the French Navy boat Cormoran was tasked with assisting a boat in difficulty off the coast of Calais.

Cormoran recovered 49 stranded people and dropped them off at the port of Calais.

A few hours later the all-weather boat Notre-Dame-du-Risban and the French Navy boat Pluvier were tasked with rescuing a further 31 asylum seekers who were then dropped off at the port of Calais.

Once docked, they were taken care of by the departmental fire and rescue service, the maritime medical coordination, and the border police.

This comes as it was revealed yesterday that Border Force officers have joined patrols on French beaches for the first time in a bid to prevent migrants crossing the Channel.

UK officials will not have the rights to arrest people but it is hoped the move will improve British intelligence of people-smuggling and migrant movements.

This month, the Ministry of Defence is set to hand responsibility for small boat crossings back to the Home Office – after taking over from the department on April 14.

This will see the Royal Navy pulled out of the Channel and sub-contractors put in place to help support Border Force officials with intercepting and processing migrants.

The first joint UK-French patrol took place just before Christmas after months of negotiations between officials from both countries. 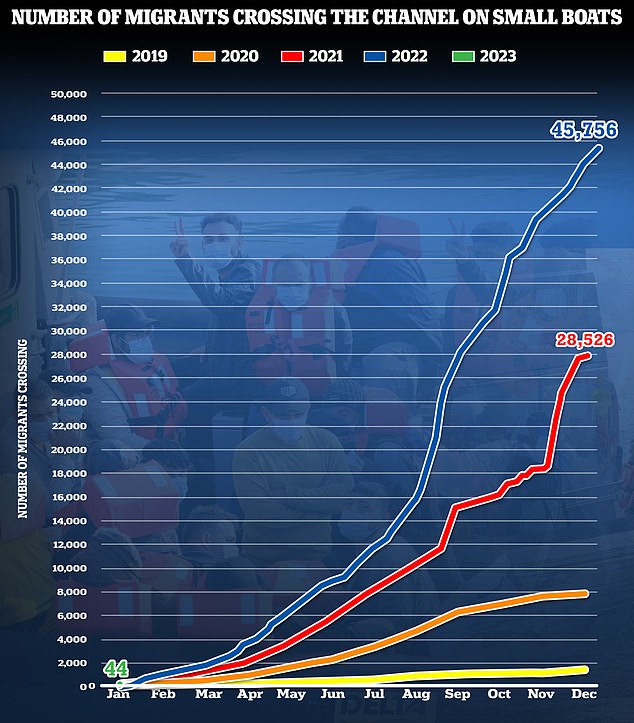 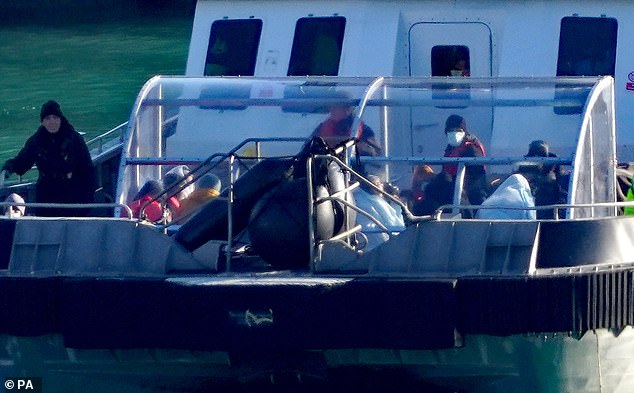 The Ministry of Defence (MoD) recently confirmed a record 45,756 migrants crossed the Channel to the UK in 2022

However the UK officers embedded in the French patrols are ‘observers’ only, meaning they will have no rights to exercise powers such as arresting someone for a criminal act, the Telegraph reported.

The Ministry of Defence (MoD) confirmed a record 45,756 migrants crossed the Channel to the UK in 2022.

The last crossings of the year took place on Christmas Day when 90 people made the journey from France in two boats.

Over the last 12 months, politicians have made a series of attempts to get a grip on the migrant crisis amid a tumultuous period which saw three prime ministers and three home secretaries. 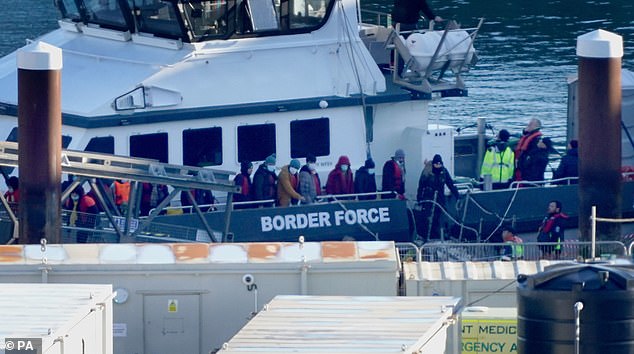 The last crossings of the year took place on Christmas Day when 90 people made the journey from France in two boats. Pictured are migrants arriving yesterday

Suella Braverman told of her ‘dream’ of seeing the Government’s plan to send migrants to Rwanda succeed after she was appointed Home Secretary – a policy which High Court judges ruled is lawful but has so far been stalled by legal action.

Since the deal was signed in April by her predecessor Priti Patel, 40,460 migrants have arrived in the UK after crossing the Channel.

Prime Minister Rishi Sunak promised to bring in legislation in 2023 to make it ‘unambiguously clear that if you enter the UK illegally, you should not be able to remain here’.

August last year was the highest month on record for crossings when 8,631 people arrived in the UK. August 22 saw a record 1,295 migrants crossing in a single day on 27 boats.

The number of arrivals began to fall towards the end of 2022, which could reflect seasonal changes as a result of the weather.

The MoD said its data is taken from ‘live operational systems’ and is subject to change, ‘including reduction’.

A Home Office spokesman said: ‘Our work with the French is vital to tackling the unacceptable rise in dangerous Channel crossings and we are committed to building on our close co-operation to date.

‘The new agreement will significantly increase the number of French gendarmes patrolling the beaches in northern France and ensure UK and French officers are working hand in hand to stop people smugglers.’