‘I think it is a big step backwards’: Boris Johnson condemns US Supreme Court anti-abortion ruling as feminists protest repeal of ‘Roe v Wade’ law outside the American Embassy in London

Boris Johnson has condemned the US Supreme Court ‘s decision to scrap the right to abortion in America as a ‘big step backwards’.

The US Supreme Court has ended constitutional protections for abortion that have been in place for nearly 50 years by deciding to overturn the landmark Roe v Wade ruling, in a move set to make terminations illegal for millions of American women.

More than 100 demonstrators gathered outside the US Embassy in London to protest the decision, as the PM told reporters in Rwanda: ‘I’ve always believed in a woman’s right to choose’.

One protester arrived wearing a costume from the dystopian novel and TV series, The Handmaid’s Tale, in which society is ruled by a fundamentalist regime that treats women as property.

UK politicians from across the spectrum spoke out against the decision, including the SNP’s Nicola Sturgeon, who said it will embolden anti-abortion and anti-women forces in other countries too.

The right of women to make their own decisions about their own bodies is a fundamental human right.’ 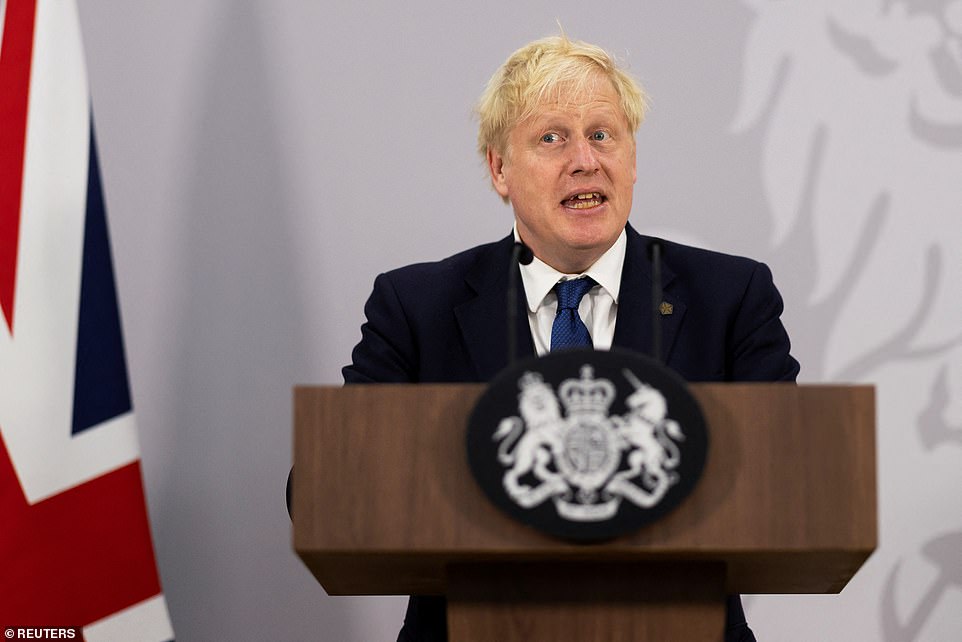 Former Labour leader Jeremy Corbyn called it ‘devastating’, and co-leader of the Green Party, Caroline Lucas, said it is a ‘truly barbaric ruling, and heartbreaking news for women everywhere’.

Some UK groups have been quick to hit out at the ruling, with the British Pregnancy Advisory Service, the UK’s leading abortion provider, saying it is ‘appalled’.

Wen-Wen Lindroth, UK chairwoman of Democrats Abroad, the official organisation of the Democrat party for US citizens living overseas, said it was a ‘momentous and sad day for the United States’.

Speaking at the protest, she said: ‘I’m about the same age as Roe v Wade and, you know, I think a lot of women of my generation, we just took it for granted that the struggle for women’s rights, you know, had come a very long way – maybe not all the way – but this was certainly one of the fundamental decisions that, you know, underlies our sense of equality in the US.

‘So to have it taken way is very meaningful and it will impact women, you know, of older generations, of younger generations certainly, and it’s just something that we’re going to need to address politically and find a way to turn back.’

‘We are calling on the UK Government to publicly condemn this assault on women’s human rights, and make clear on the international stage that removing women’s access to swift, safe abortion services has absolutely no place in any society that calls itself civilised in the 21st century.

‘For our politicians to watch silently as women’s rights are rolled back would be unforgiveable. We urge the government to show leadership as a matter of urgency.’

The charity Christian Action Research and Education welcomed the decision, saying ‘the most compassionate societies esteem and protect’ both mothers and babies.

Chief executive Ross Hendry said: ‘Limiting access to abortion must be accompanied by appropriate support for women experiencing crisis pregnancies, and families raising children. This is what a true pro-life ethic looks like.’ 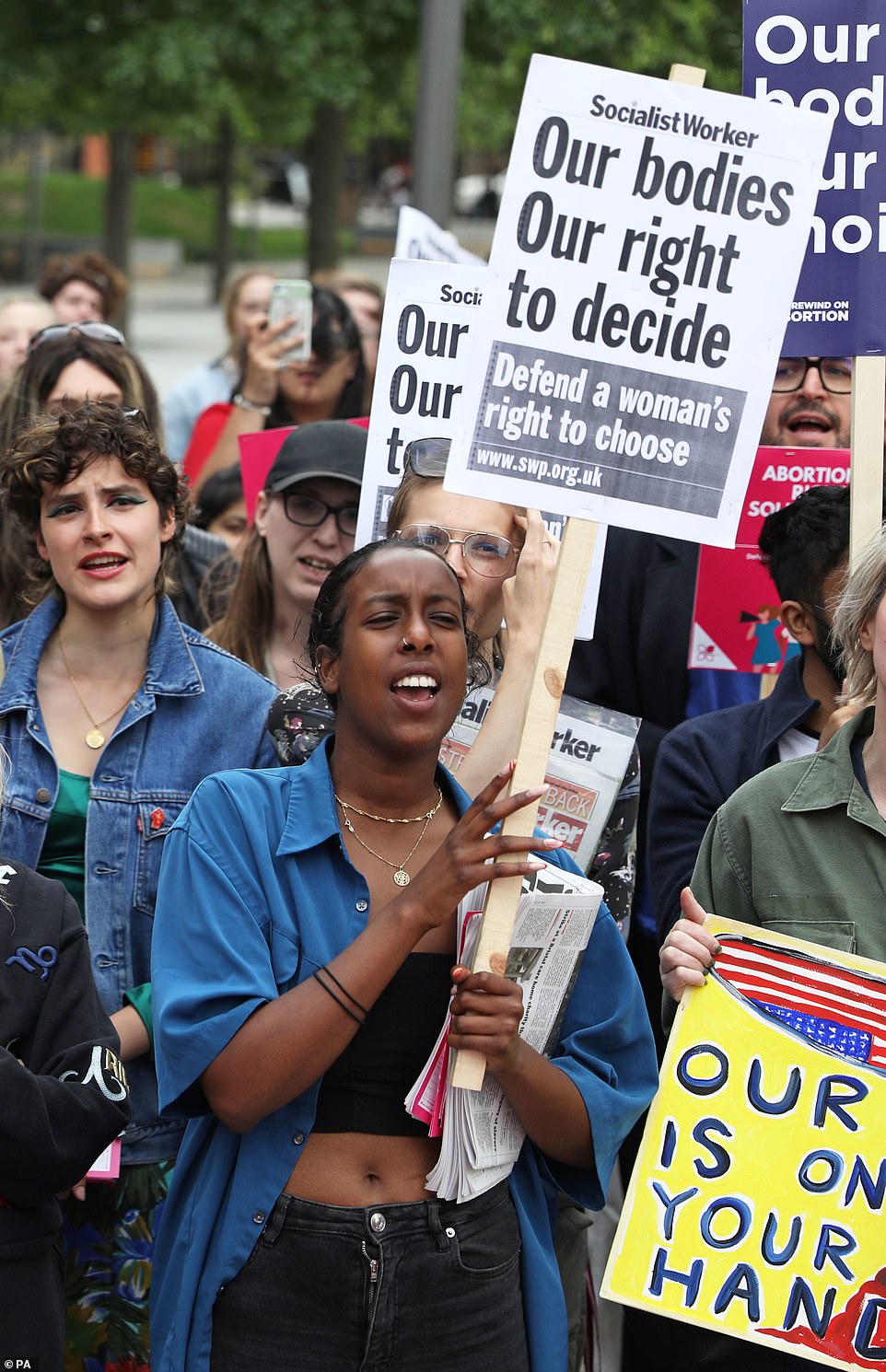 The US Supreme Court has ended constitutional protections for abortion that have been in place for nearly 50 years by deciding to overturn the landmark Roe v Wade ruling. It is expected to lead to abortion bans in around half of US states. Demonstrators pictured outside the US Embassy in London 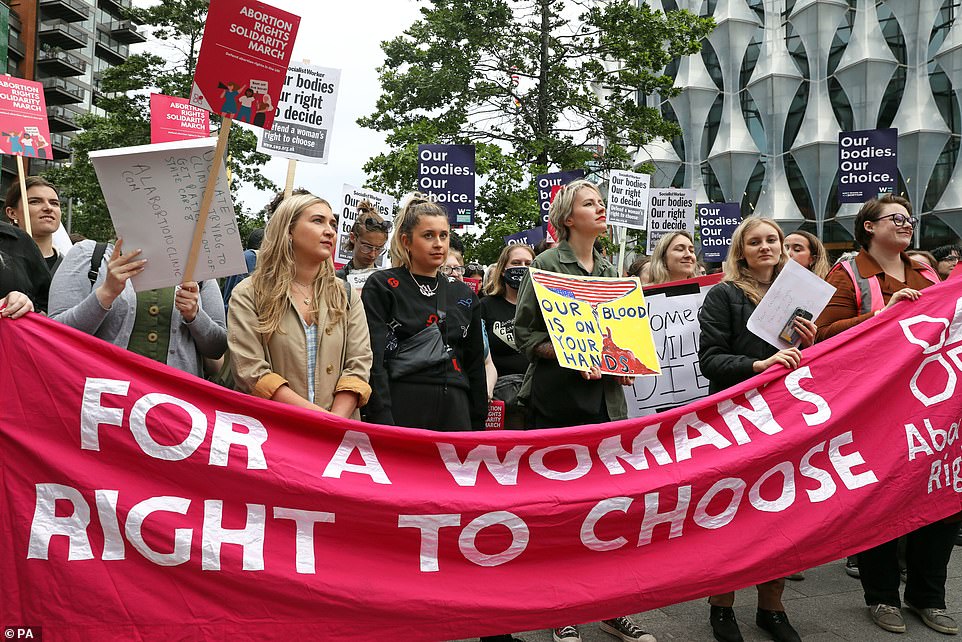 Spokeswoman for the Right To Life UK group, Catherine Robinson, said the ruling overturns ‘an unjust law’ and is the ‘beginning of the legislative battle over abortion, certainly not the end’.

Nimco Ali, the Government’s independent adviser on tackling violence against women and girls, called the decision ‘an assault on women’s human rights, their lives and their families’.

She tweeted: ‘The UK Government and other G7 cannot remain silent as women’s human rights are breached.’

The Women’s Equality Party tweeted: ‘Make no mistake. Women will die because of this ruling, and tens of thousands more will be criminalised or forced to continue with pregnancies they did not choose.

‘It is barbaric, inhumane and utterly heartbreaking. Solidarity with our sisters.’

The party and the campaign group Abortion Rights were calling for people to join them in protest at the decision outside the US embassy in Vauxhall, south London, on Friday evening.

Mayor of London Sadiq Khan posted on Twitter: ‘London stands with the women of America whose most basic rights and freedoms are threatened by this ruling. A dark day for a great country.’

Judith Orr, vice chair of campaign group Abortion Rights, which claims to have organised the demonstration, said protesters were ‘full of rage and anger’ about the decision and warned the consequences would be ‘dire’.

She said: ‘You can’t exaggerate really the impact it’s going to have, women will die, rural women, women who can’t access care online, African American women, women of colour, poor, working class women, these are the people who are going to suffer the most from this.’

She added: ‘We stand with you. We will fight until you win your rights back and we’re full of emotion this evening for those women.

‘I find it hard to fathom, in the 21st century, that they’re doing this, that they’re pushing people to risk their lives to control their own fertility. It’s absolutely appalling and devastating this evening.’

The crowd stood listening to speakers condemn the ruling of the US Supreme Court while holding signs, many reading ‘our bodies, our choice’. 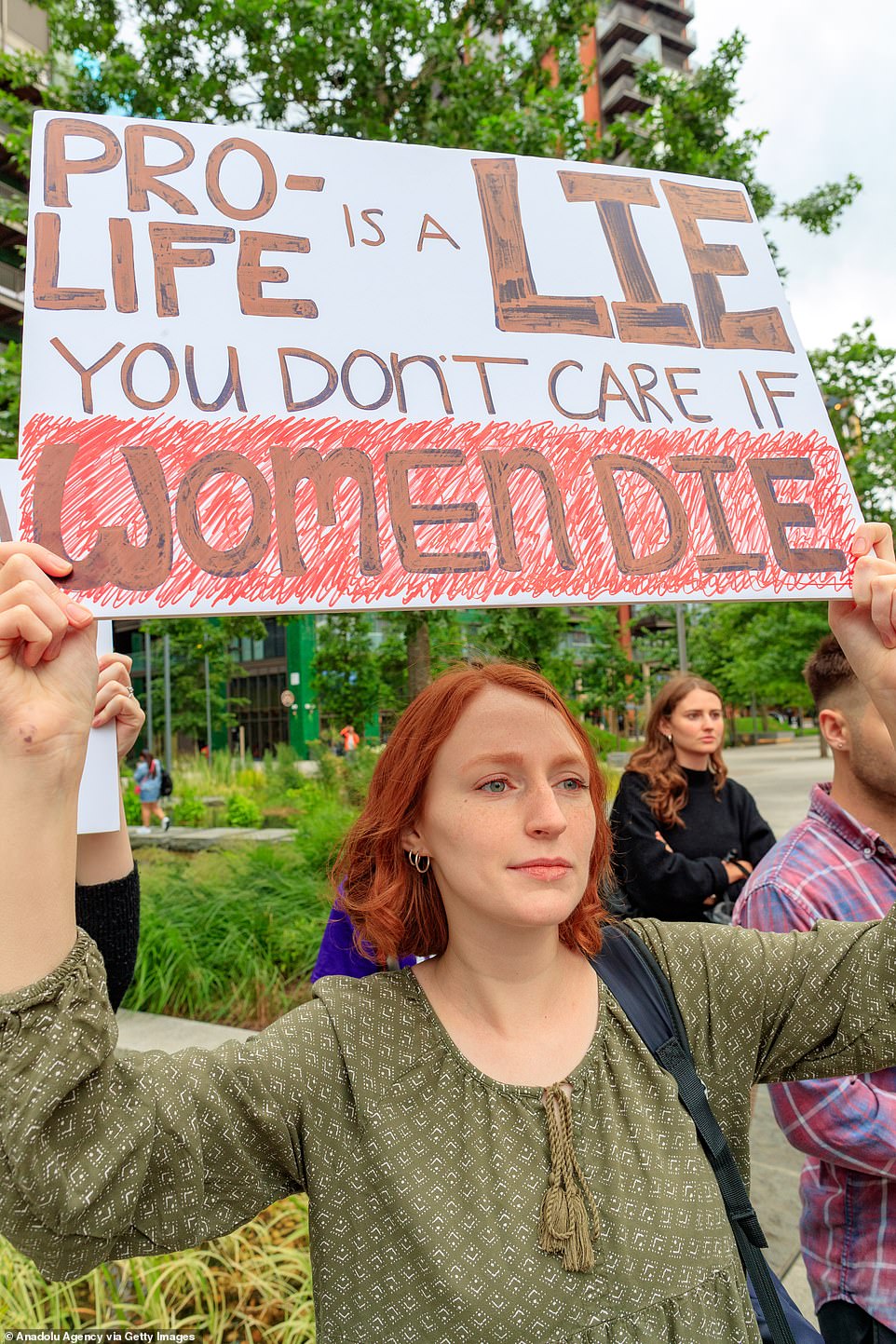 Speaking at the protest, Wen-Wen Lindroth, UK chairwoman of Democrats Abroad, the official organisation of the Democrat party for US citizens living overseas, said it was a ‘momentous and sad day for the United States’ (protester is pictured holding a sign against the ruling) 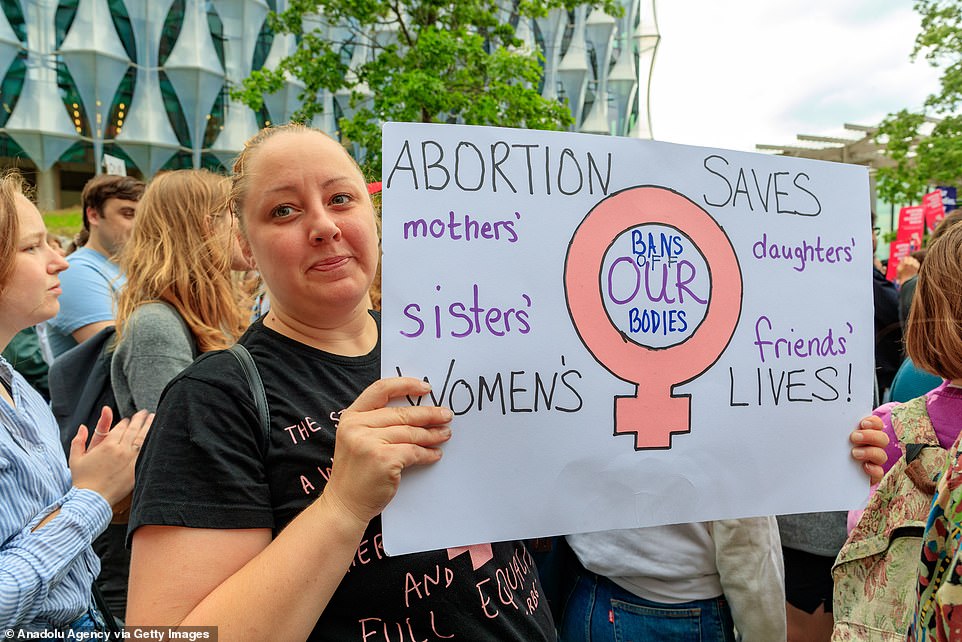 Some UK groups have been quick to hit out at the ruling, with the British Pregnancy Advisory Service, the UK’s leading abortion provider, saying it is ‘appalled’. Protesters are pictured outside the US Embassy in London on Friday

Esme Trevelyan, 25, said while demonstrating outside the US Embassy, in Nine Elms, London: ‘Obviously we’re in London, there’s not lots we can do but being here outside the American embassy is just a message of solidarity, I guess, towards American women…

Jessica Cappi, 25, said: ‘At 4:15pm today we all got the notification on our phones and thought ‘this is the end of something’ and we wanted to come out and fight for it and to make our voices heard I just feel so angry for women everywhere that we could regress. 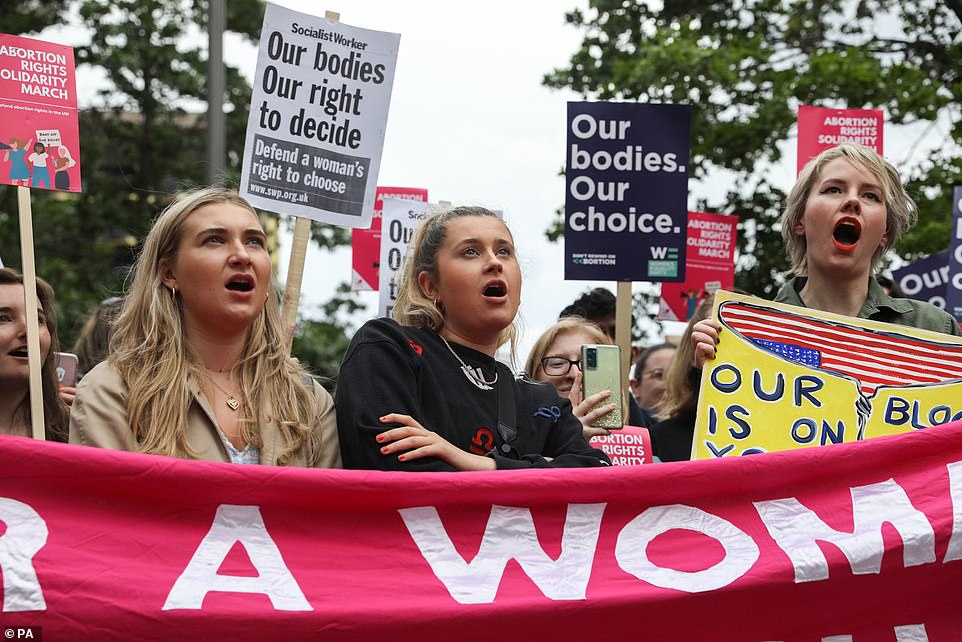 Billie Eilish said it was a ‘really dark day’ for women in the US while performing at Glastonbury, after the Supreme Court overturned Roe v Wade – the landmark 1973 decision that legalised abortion nationwide. Pictured are demonstrators at the US Embassy in London on Friday

‘I saw a statistic today that was the US was one of four countries that are actually going backwards on abortion rights. So I hopped on the train and 45 minutes later, here I am.’

Billie Eilish said it was a ‘really dark day’ for women in the US while performing at Glastonbury, after the Supreme Court overturned Roe v Wade – the landmark 1973 decision that legalised abortion nationwide.

As she introduced her song titled Your Power she said the song is about the concept of power.

She said: ‘The song we’re about to do is I think one of the favourites that we’ve written and it’s about the concept of power and how we need to always remember how not to abuse it.

‘And today is a really, really dark day for women in the US. I’m just going to say that as I cannot bear to think about it any longer in this moment.’