BORIS Johnson teased Emmanuel Macron in front of other world leaders about France’s dire record winning battles against the British Navy, The Sun can reveal.

The cheeky gag came as the final day of the G7 in sweltering Cornwall exploded into a row about Brexit and the pair traded bruising diplomatic blows. 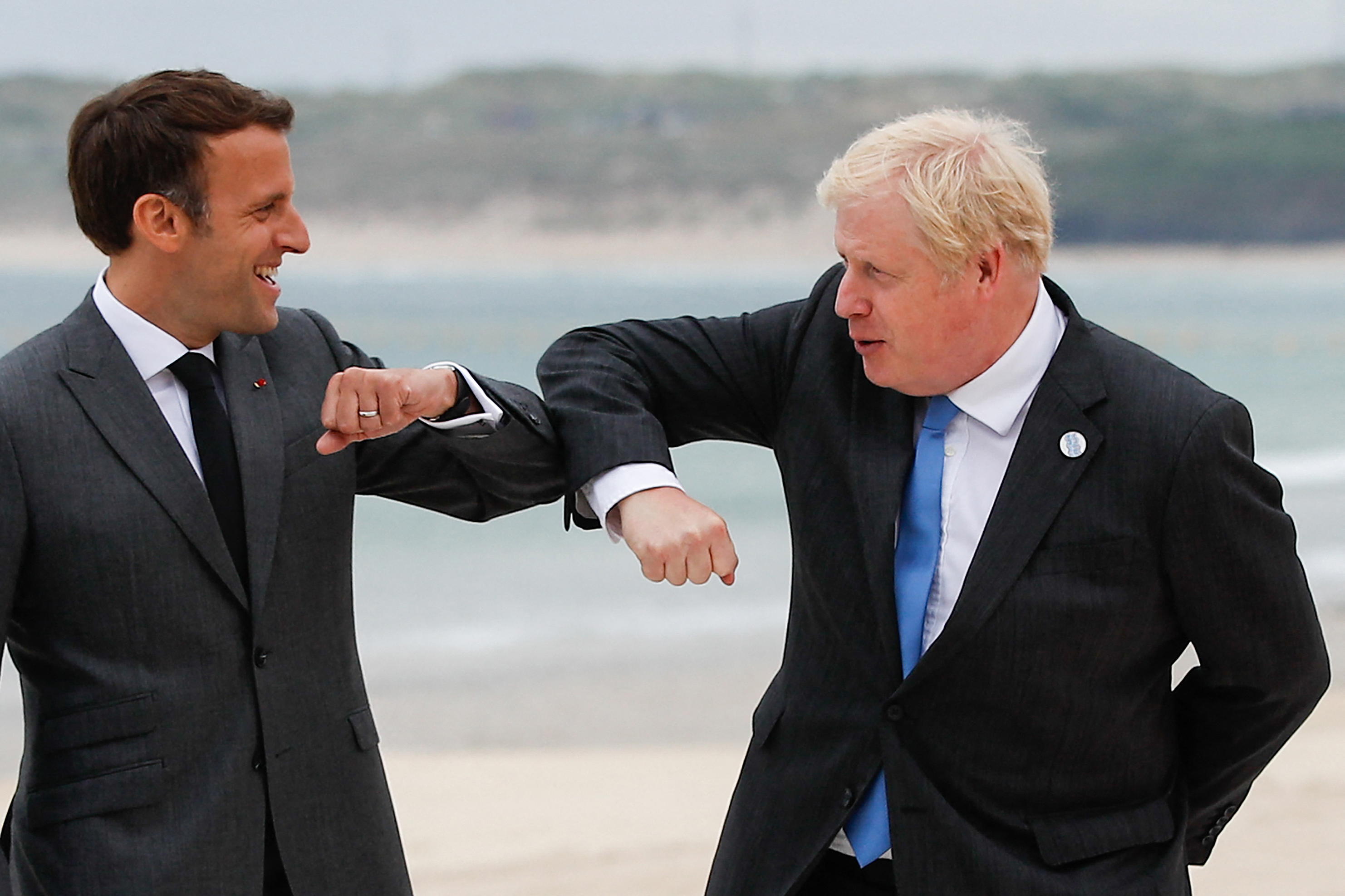 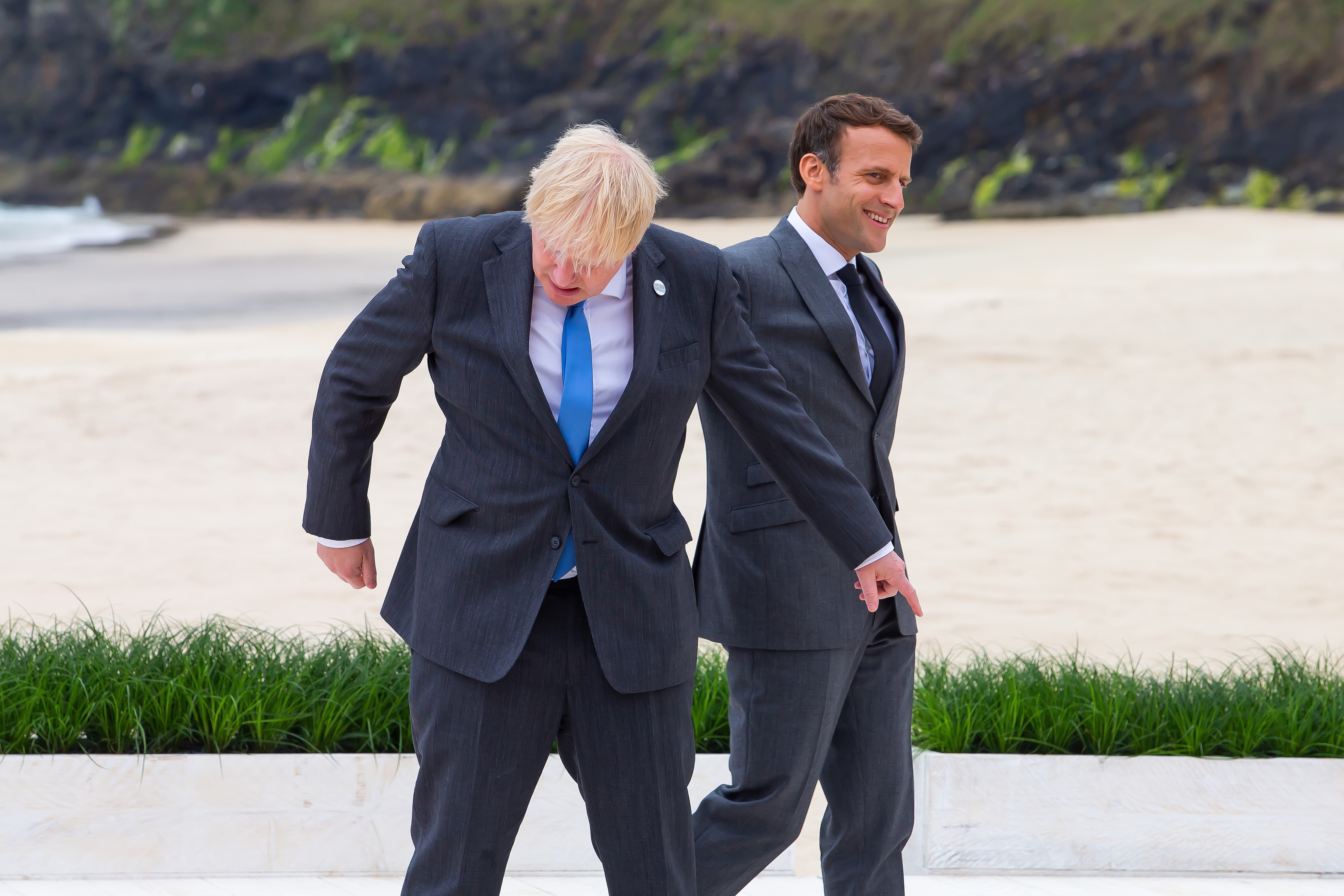 At the final session of the seaside summit, Mr Johnson joked to his fellow world leaders that he was a “little heavy headed” after some of them had stayed the night before.

Mr Macron had bought some expensive red wine as a gift for Joe Biden, but leaders ended up tucking into it after the US President – nicknamed Sleepy Joe – headed to bed early.

And BoJo blamed the strength of the wine for his sore head, saying the grog “was as old as when the French last won a naval battle.”

The dig came as Britain and France ramped up their war of words about Brexit, with Mr Macron telling Boris calm down and “come back to reason”.

In a cutting end of summit dig at the PM, the French President denied British claims he said Northern Ireland is not a proper part of the UK.

Earlier livid Foreign Secretary Dominic Raab hit the airwaves to slam the “offensive” comments, saying: “We have serially seen senior EU figures talk about Northern Ireland as if it was some kind of different country to the UK.

'WE NEED A BIT OF RESPECT'

“It is not only offensive, it has real world effects on the communities in Northern Ireland, creates great concern, great consternation.

Mr Raab added: “Could you imagine if we talked about Catalonia, the Flemish part of Belgium, one of the lander in Germany, northern Italy, Corsica in France as different countries?

"We need a bit of respect here.”

But Mr Macron hit back accusing the Brits of nearly wrecking the summit by stoking animosity with their briefings about EU threats to ban sausages being exported from the mainland to Northern Ireland.

The cosy leaders summit in sunny Cornwall was dented by the furious row over the Brexit deal and what it means for chilled meats.

The EU is refusing to relax rules so that tasty British bangers and burgers can be stocked in Ulster.

As tensions mount, Britain is threatening to rip up parts of Brexit divorce terms and carry on stocking the great British banger in shops in NI despite the EU’s sausage ban, which kicks in at the end of June.

But Brussels has threatened a trade war if this happens.

Raising the issue with Mr Macron in talks on Saturday, Mr Johnson asked the French leader: “How would you like it if the French courts stopped you from moving Toulouse sausages to Paris?”

His French counterpart is said to have replied: “That is not a good comparison because Toulouse and Paris are in the same country.”

The pint-sized President said the EU is “respectful of British sovereignty” – but warned Britain must “respect” the Brexit deal and all the customs checks it carries with it.

Asked about the sausage wars at the end of the summit in Cornwall, Mr Macron said: “On that particular subject matter we all need to stay very calm”. 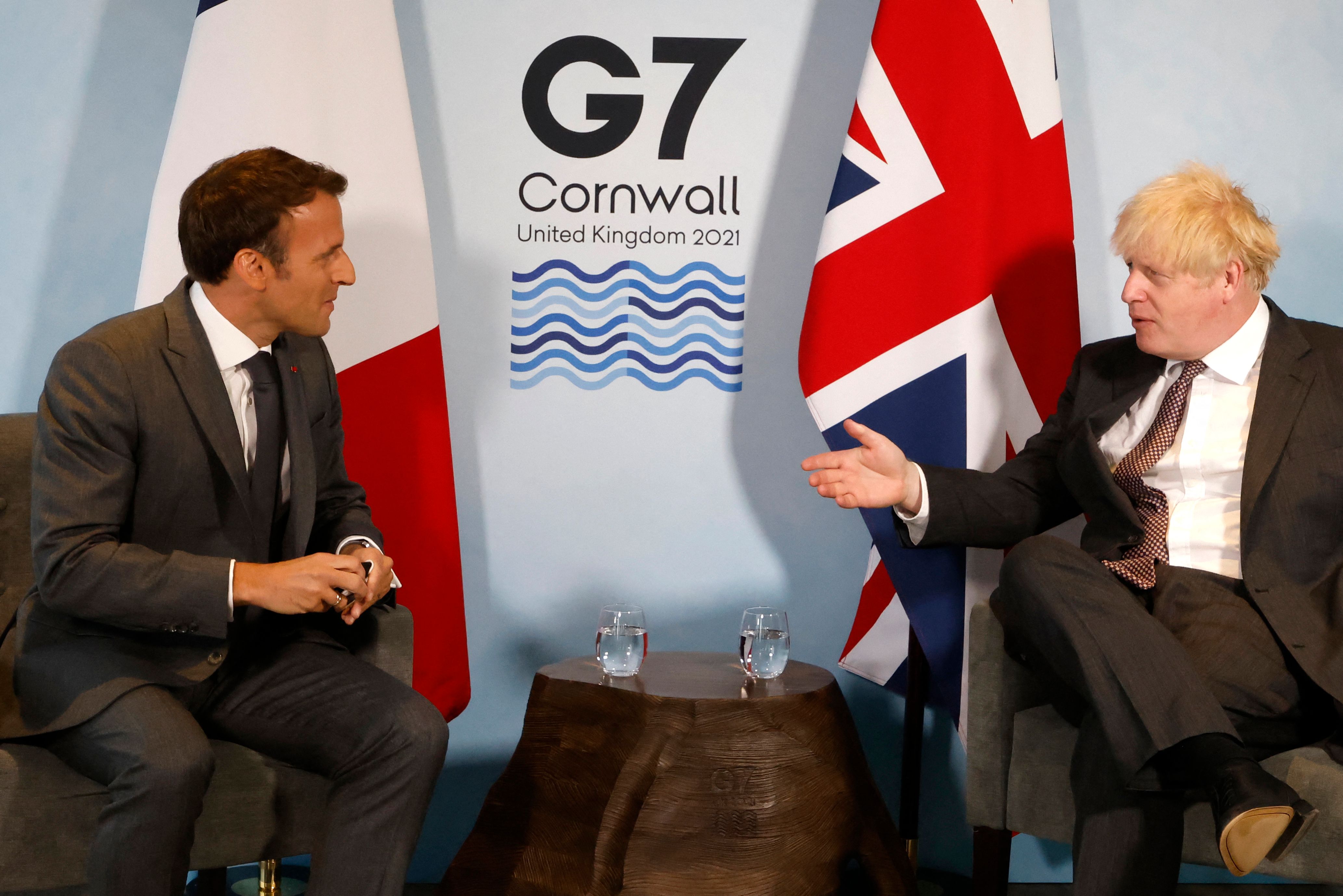 Dropping the diplomatic pleasantries to deliver a tongue-lashing, he added: “We can’t create polemics and disagreements when we are meeting over three days.

“Let's not lose time in disagreements created in corridors or antechambers.”

The angry French leader also suggested the EU is better off without the Brits.

In a dig at the UK and Brexit, Mr Macron said: "The EU demonstrated in the last four years that it is a political entity not just an economic entity… we can have certain interests and values we can pursue together and not be blocked by another partner."

At his own beachside press conference, Mr Johnson warned: "Of course we make the point continuously we are part of one great, indivisible United Kingdom."

He added: "What I am saying is that we will do whatever it takes to protect the territorial integrity of the UK, but actually what happened at this summit was there was a colossal amount of work on subjects that have absolutely nothing to do with Brexit."

Seeking to downplay the scale of the behind the scenes diplomatic dust-up, he hastily added: “But actually what happened at this summit was there was a colossal amount of work on subjects that have absolutely nothing to do with Brexit.”

Mr Johnson hailed his fellow leaders for pledging 1 billion doses of Covid-19 vaccine – either directly or through funding to the Covax initiative – to poor countries.

The Prime Minister said this was made up of "a massive contribution by the United States and other friends", but one of his predecessors, Labour's Gordon Brown, said the G7 summit "will go down as a missed opportunity" due to the lack of a plan to deliver 11 billion vaccine doses.

The target to vaccinate the world by the end of next year will be done "very largely thanks to the efforts of the countries who have come here today", Mr Johnson said.

He said the UK's contribution to the 1 billion dose pledge is another 100 million vaccines from now to next June. 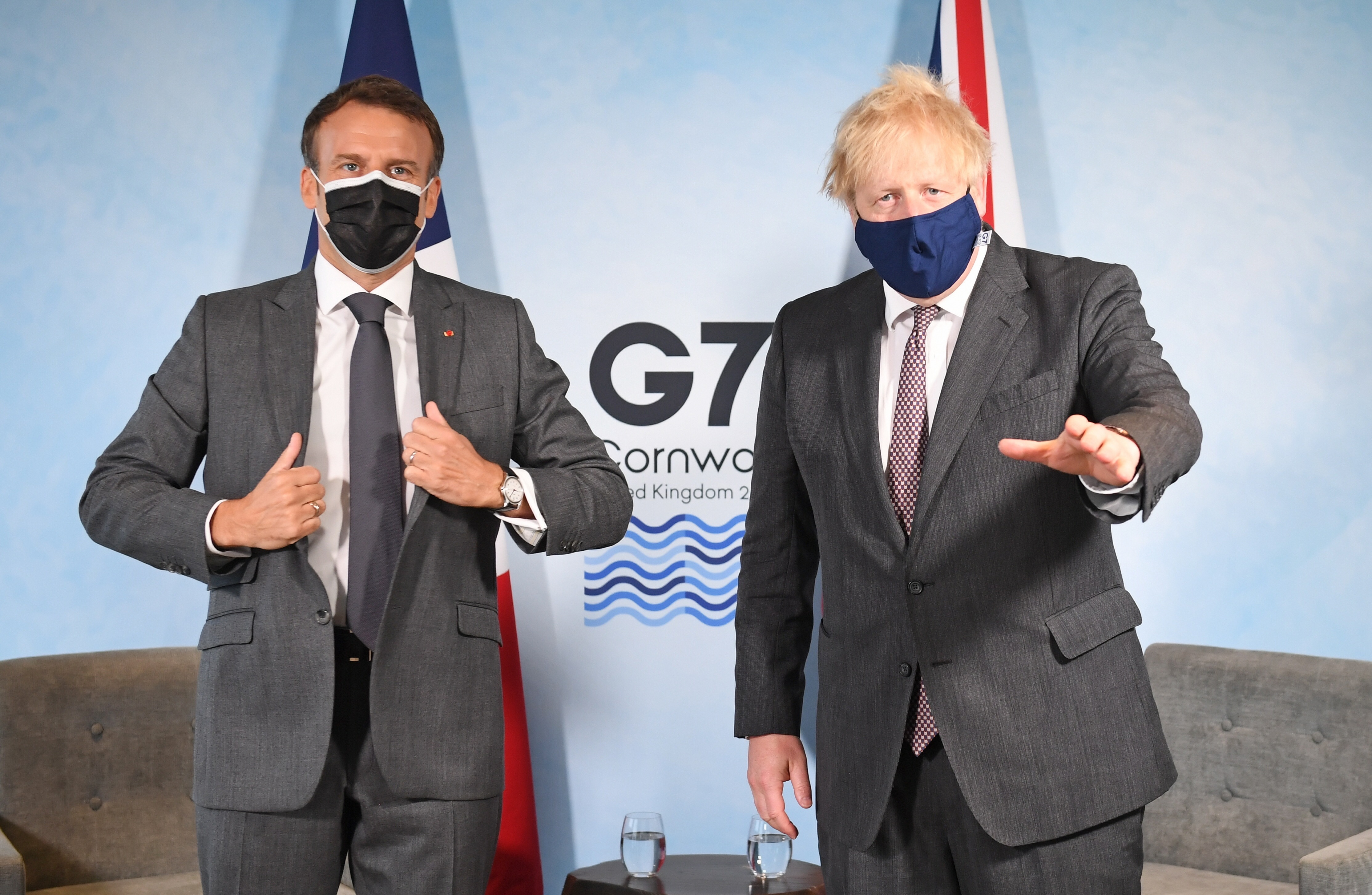 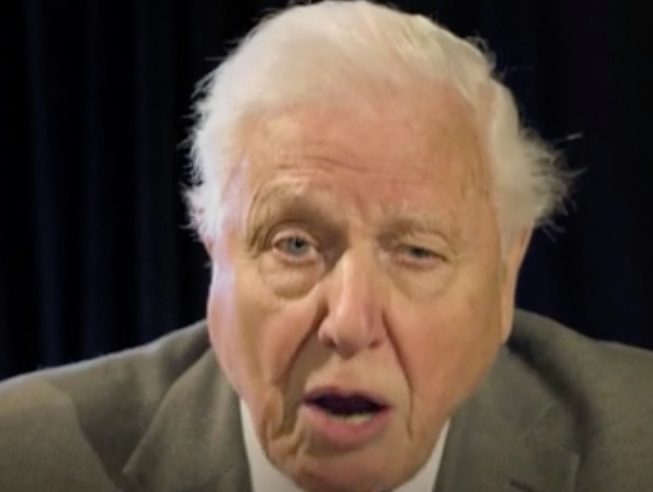 The environmentalist, 95, said in a video address: “Tackling climate change is now as much a political and communications challenge as it is a scientific or technological one.

“We have the skills to address it in time. All we need is the global will to do so.”

The leaders committed to back a “green revolution".