Boy, eight, stranded without his wheelchair for five hours at Gatwick

A little boy who lost his legs after being subjected to horrific abuse by his birth mother was left stranded at Gatwick Airport without his wheelchair for more than five hours as flights were delayed due to the adverse weather.

Tony Hudgell, eight, was on his way home after a four-day trip to Lapland, Finland, gifted to the inspirational youngster for his fundraising efforts and tireless campaigning to impose harsher sentences for child abusers when the incident occurred.

The inspirational Pride of Britain winner who lost his legs after being tortured by mother Jody Simpson and her boyfriend Anthony Smith as an infant had his ‘needs ignored’ after waiting for hours for a wheelchair to arrive from off the airplane.

‘It was supposed to be there to get him off the plane but no it wasn’t’, his adoptive parents Paula and Mark Hudgell said in a tweet. 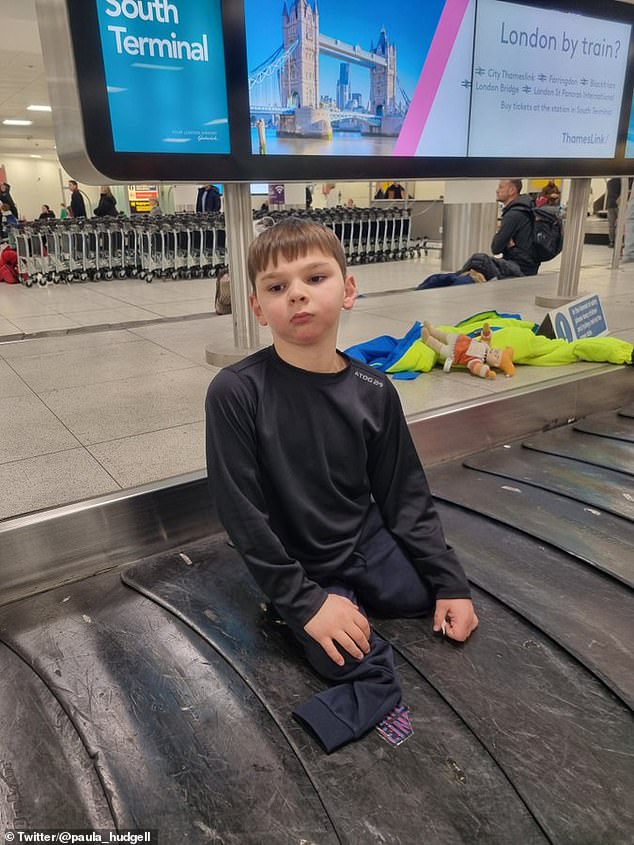 Tony Hudgell, eight, was on his way home after a four-day trip to Lapland, Finland, with his adoptive parents Paula and Mark Hudgell when the incident occurred 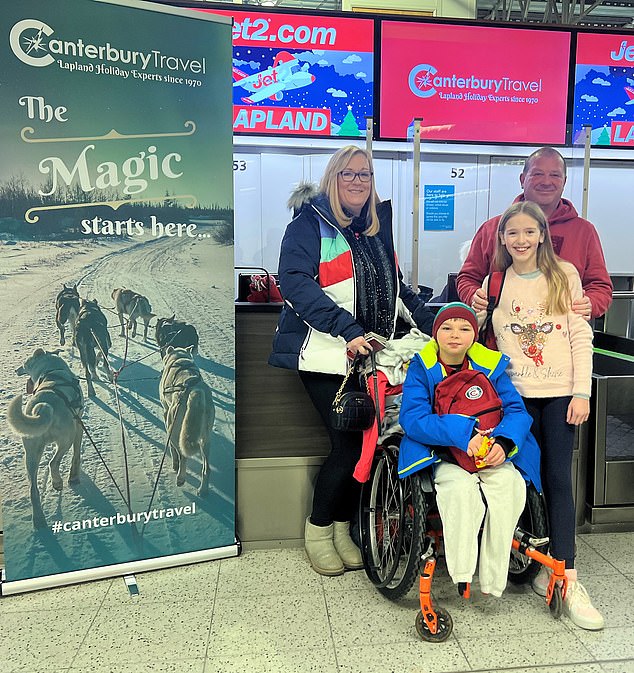 Paula Hudgell, pictured with Tony, eight, Mark, 58, and sister Lacey, 10 ahead of their trip to Lapland last week

The little boy who captured the nation’s hearts by raising £1.8million through fundraising walks waited for five hours for the wheelchair despite assistance being booked in advance.

His family, from West Malling, Kent, said that when the £6,500 wheelchair did finally arrive it ‘was put on the conveyor belt and got twisted and bent’, adding they would be lodging a complaint against the airline.

Responding to the tweet, Jet2 said they were ‘incredibly sorry’ to hear about Tony’s experience, and were looking into fixing the situation.

The youngster who lost both legs through abuse had been one a once-in-a-lifetime trip to Lapland funded by holiday specialists Canterbury Travel after his incredible fundraising feat.

The holiday, which included a trip to Santa’s Grotto, had been gifted to the family because of Tony’s efforts with fundraising and changing the law for child abuse.

His adoptive other Paula, 55, said before the trip that the family had been ‘looking forward to it for such a long time’. 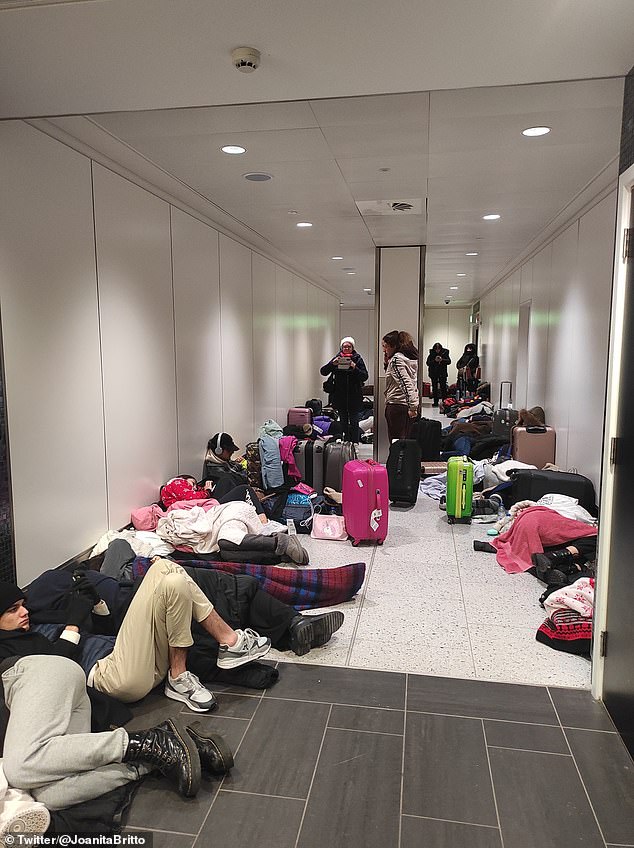 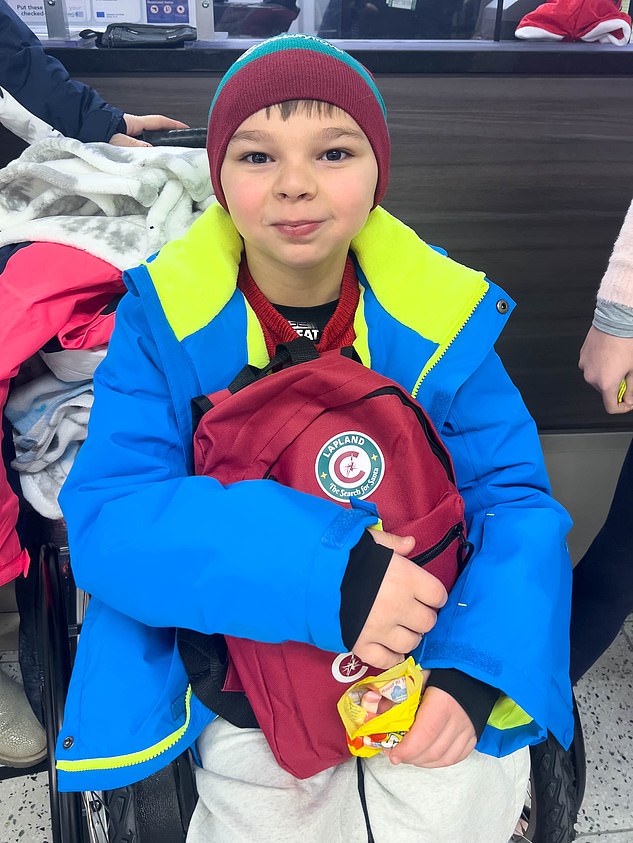 Brave Tony Hudgell (pictured), eight, told of his excitement ahead of his trip to Lapland last week as he jetted off from Gatwick Airport

She continued: ‘I was diagnosed with bowel cancer. It’s been a really tough year and I ended up having emergency surgery six weeks ago.

‘Thankfully everything is going alright now and I just can’t wait for the family time and make some magical memories.

‘It’s been my goalpost throughout the whole of the year that I wanted to be well enough and be able to go and make those memories.

‘It has really come at the right time as well. Our family needed a break. We just cannot wait.’

Tony’s charitable work saw him be hailed a hero by Prince William and wife Kate over his extraordinary fundraising walks to help vulnerable children.

He set out to raise £500 for the hospital that saved his life by walking 10km in 30 days in 2020 after being inspired by Sir Captain Tom Moore, who raised more than £33million walking in his backyard.

Last year a foundation set up in his name to enhance the lives of children who have been affected by physical, emotional, or psychological abuse provided more than 700 Christmas presents for youngsters in need and he is hopping to match that this year.

And his efforts are set to receive a huge boost from Father Christmas himself who is planning to surprise the youngster with a cheque for £5,000 for the Tony Hudgell Foundation.

Tony’s incredible efforts come despite an horrific start to life which led to him undergoing 23 operations and eight blood transfusions. 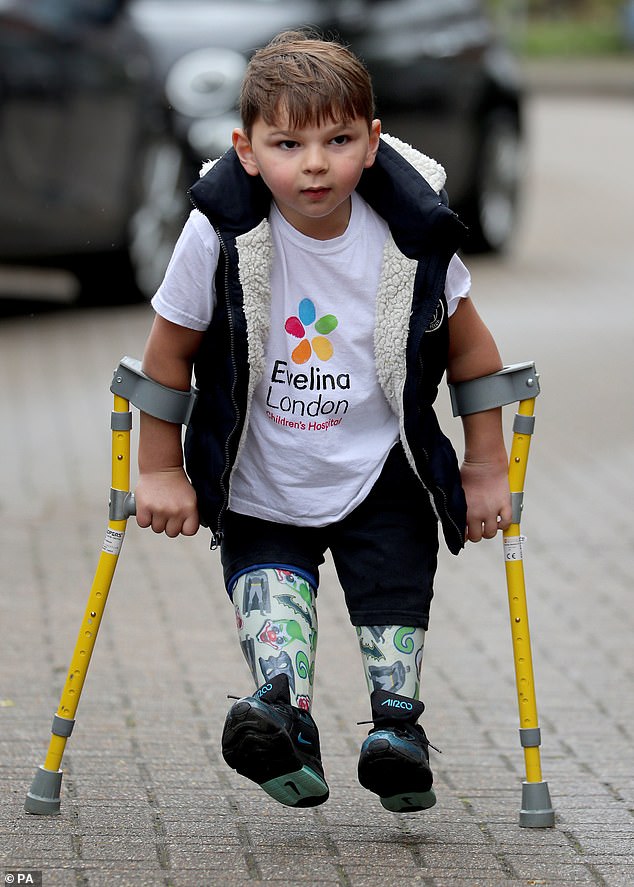 The youngster has been hailed a hero by Prince William and wife Kate over his extraordinary fundraising walks to help vulnerable children. He set out to raise £500 for the hospital that saved his life by walking 10km in 30 days in 2020 (pictured taking the final steps in his fundraising walk)

The inspirational youngster was rushed to hospital with life-changing injuries in 2014 when he was 41-days-old, following horrific abuse from his parents, Jody Simpson and Tony Smith.

The pair were found guilty of child cruelty in 2018 and are both currently serving a ten-year prison sentence.

In 2017, Tony had both legs amputated due to the injuries he sustained as an infant. He is still learning to walk on prosthetic legs without crutches.

The family’s relentless campaigning led to the establishment of Tony’s Law, named after the youngster, which has seen the maximum penalty for causing or allowing serious physical harm to a child to increase from ten to 14 years, while causing the death of a child has risen from 14 years to life.