Follow
Home » World News » Brett Maher had the 'yips.' Here's how Cowboys plan to help their kicker before they face 49ers

Brett Maher had the 'yips.' Here's how Cowboys plan to help their kicker before they face 49ers

FRISCO, Texas — The message was consistent. But the tone varied.

The Dallas Cowboys expressed no plans Tuesday to move on from kicker Brett Maher after he became the first player in NFL history to miss four extra-point attempts in a game since the league began recording the statistics 91 years ago.

But the degree of confidence Cowboys brass expressed in Maher one day after a 31-14 NFC wild-card victory over the Tampa Bay Buccaneers was inconsistent.

There was team owner Jerry Jones, in his early morning radio show, wary of moving too quickly away from a player who completed 50 of 53 extra-point attempts in the regular season, in addition to 29 of 32 field goals.

“But we will take a look at it,” Jones said on Dallas radio station 105.3 The Fan. “It’d be really a big setback to go into the rest of this tournament, the rest of the playoff with shakiness at kicker.”

There was head coach Mike McCarthy, who had said Monday night from the Raymond James Stadium podium that Maher was “disappointed, but we need him.” On Tuesday, McCarthy further reiterated belief in Maher’s process, and the kicker’s ability to rebound after the worst night of his career.

“He was distraught,” Fassel said. “Bad day at the office, but I have full confidence he’ll rebound.”

Important to confront rather than pretend it didn’t happen. pic.twitter.com/KtqCwwTJOJ

“I think the biggest thing is just to make sure you got a good plan with Brett moving forward,” McCarthy said. “We’re going to forge ahead. So that’s, as of right now, that’s the plan.”

The qualifying phrase, “as of right now,” seemed notable.

And then there was special teams coordinator John Fassel, who needed no hesitation to express whether he wants Maher to start for the Cowboys at kicker in their divisional playoff game Sunday at the San Francisco 49ers.

So what will the Cowboys do? And how do they explain the disastrous performance that assailed the NFL’s third-highest scoring player (137 total points) in the 2022 season? 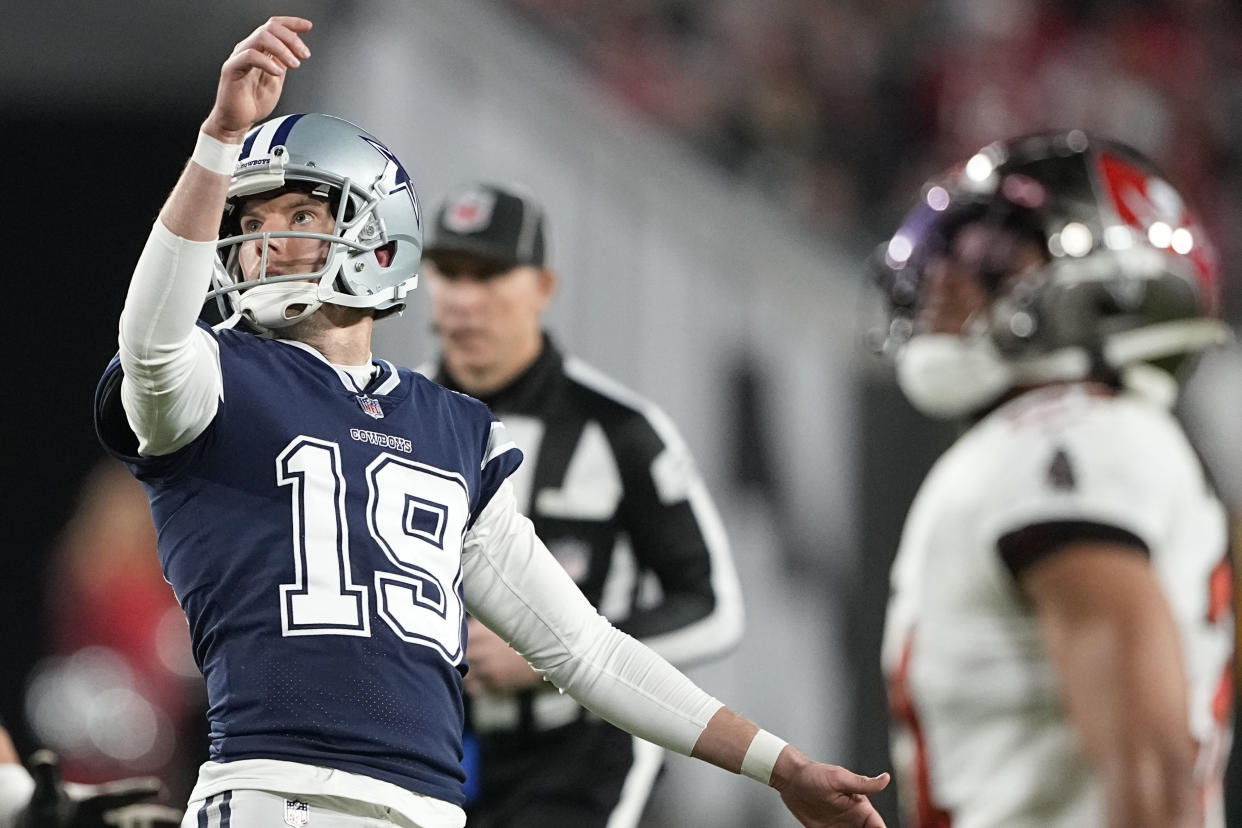 A weird night of kicking

If a picture is worth a thousand words, the Cowboys also believe each extra-point attempt is worth a story.

On his first miss, Maher “didn’t commit to a full swing,” Fassel said. “Almost like a lazy swing.” The ball sailed so far right it landed not in the net behind the upright but in the stadium stands. The Cowboys then had to continue their kicking operation with the second of their three designated kicking, or "K" balls, a ball with which Maher had far fewer reps and experience.

"Told him after the game: ‘Hey, let that go.’ We’re going to need him. I just played like s*** a week ago. That happens..No doubt he’ll come back next week, be perfect & help us win."pic.twitter.com/5eGyrZ2qSZ

To further distract from the second extra-point attempt, officials apparently flagged the Cowboys’ snapping operation before their second kick, saying they could not use a blade of white-painted grass from the field’s painted line to spot the ball. Whether that contributed to a second wide right extra-point attempt is up for debate, but what isn’t is Maher apparently catching the ball with his toe rather than executing a clean strike.

The stands swallowed that ball, too, leaving the Cowboys settling for their last, and least worn-in, kicking ball.

“We were down to our third and last ‘K’ ball which hadn’t been doctored up,” Fassel said, explaining the nuances. “You only have a certain amount of time with the ‘K’ balls so you spend most of the time [pregame] on the first one, whatever’s left over on the second and hope to get a [kick] on the third one. The first two got lost in the stands. Down to our last ‘K’ ball and if we had lost that one, we’d have needed to use one of the Buccaneers’.”

Maher overcorrected his third attempt. This time, he shanked left.

And by the fourth miss, the chaos was in Maher’s head. Yes, Fassel said, Maher had the “yips” — a psychological phenomenon in sports that the Mayo Clinic defines as when athletes became “so anxious and self-focused — overthinking to the point of distraction — that their ability to execute a skill … is impaired.”

On Tuesday morning in a meeting with Fassel, the kicker remained “distraught.”

As of Tuesday evening, the Cowboys did not plan to drastically change Maher’s practice week or game day operation, a person with knowledge of the plan confirmed to Yahoo Sports. The person spoke on condition of anonymity because they were not authorized to publicly disclose details of the team’s game plan.

Maher was working out at team headquarters Tuesday, confronting and reviewing the frustrating tape, and preparing for his normally scheduled hash work on Thursday and situational kicks on Friday. A potential directional switch was the most likely change if any were to come (winding up from the right rather than left, for example) but a clean practice week could eliminate even that leaning.

The Cowboys’ next full practice, and thus designated kicking time, was scheduled for Thursday.

Fassel lauded Maher’s process as the best and most distinct routine of kickers he’d worked with in 18 seasons coaching NFL special teams with legs including Sebastian Janikowski and Greg Zuerlein’s. Each, at some point, got the yips. Each, afterward, kept kicking and moved past them.

“This week will give him confidence, just getting back out there,” Fassel said. “He’s probably going to be mentally hurting pretty bad until he can kind of sweat and kick again. There’s no medicine like being back on the practice field. I am optimistic. A good, professional man who really gives a damn … leads me to be optimistic about a good rebound. We all want it.

“To be honest with you, as a coach I kind of live for these moments — to play more psychologist than coach, get back in the meeting rooms and find a way to help these guys bounce back.”

Maher won’t have much time to pivot. The Cowboys travel to San Francisco on Saturday after a shortened practice week, raring to upset the 49ers and advance to a conference championship game for the first time in 27 years.

The 49ers are 3.5-point favorites, per BetMGM. The Cowboys will need every point they can get. Members of the organization hope Maher can deliver.

“At the end of the day, we all have a job to do,” McCarthy said. “He knows he has to put the ball through the uprights. And he’s been super productive and consistent for us.

“In this business, especially this game, you learn from your experiences when it doesn’t go the way you like as opposed to the success of it. So just like our whole football team [in a Week 18 loss], we came out of Washington and got punched in the jaw and I think we clearly responded.

“I think he definitely has that in him.”