The worst of both worlds: Britain is battered by hail, thunder and intense downpours with flood and rain alerts in England and Scotland – but DROUGHT covering all of Wales is declared for first time in 16 years

‘Intense’ torrential rain is hitting parts of the UK as the week draws to a close amid warnings of a fresh deluge of thunderstorms and hail.

But as wet weather warnings came from the Met Office, the whole of Wales moved to drought status for the first time in sixteen years today, despite downpours across the country.

Parts of the country have even seen flooding in recent weeks, despite August being declared the third-driest six-month period since records began in 1865. 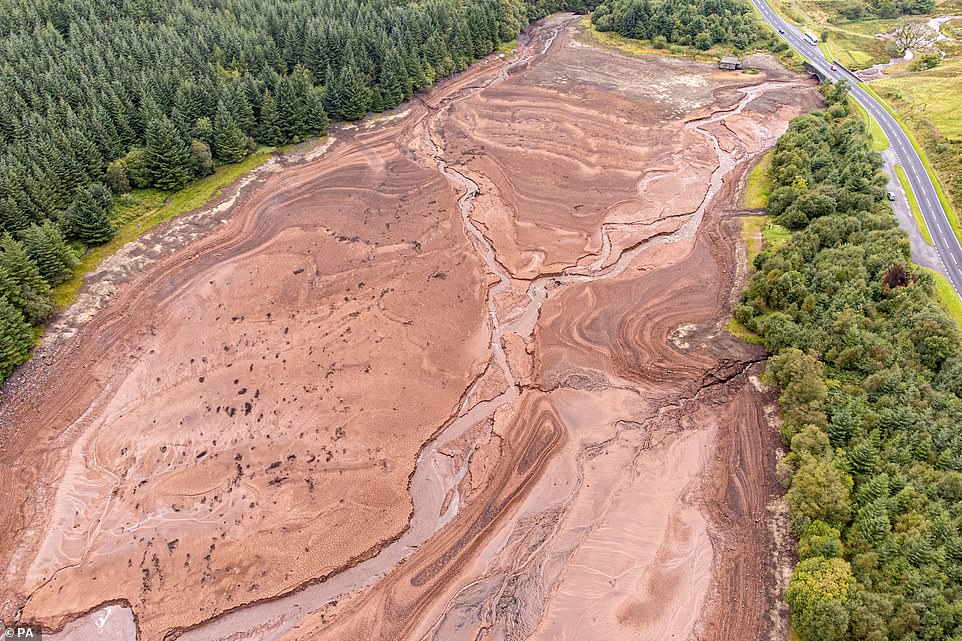 Cantref Reservoir in Brecon Beacons National Park, Wales. The whole of Wales moved to drought status for the first time in sixteen years today, despite downpours across the country 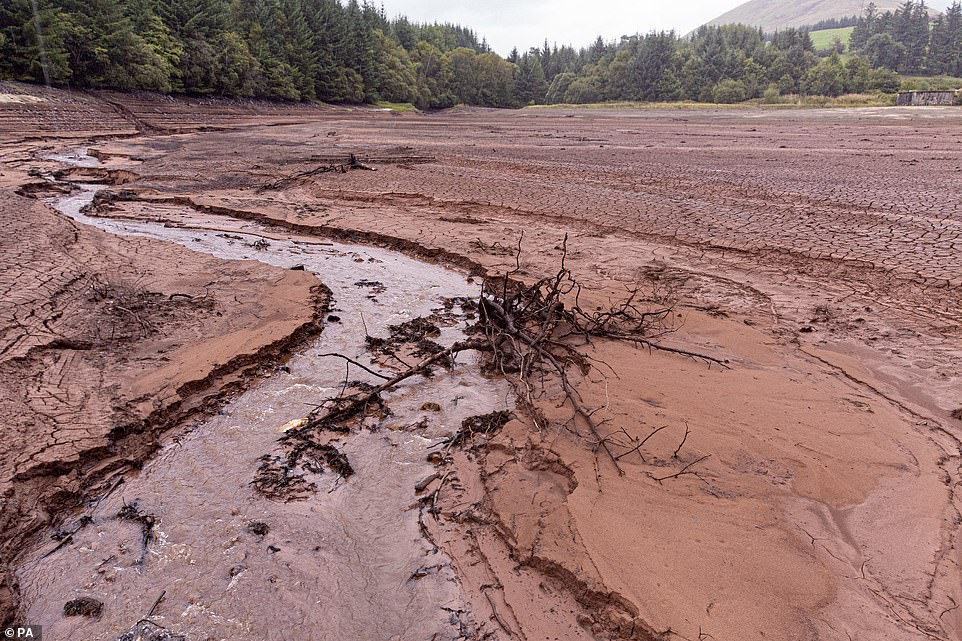 ‘The recent rainfall has not been sufficient to compensate for the impacts of the prolonged dry weather period over recent months in these parts of Wales,’ said Natural Resources Wales, which monitors the country’s environment

Between March and August, Wales received just 56.7% of its expected rainfall, according to Natural Resources Wales (NRW), which monitors the country’s environment.

Early September has seen the return of rainfall across Wales – with 34% of the long-term average rainfall for September falling by last Tuesday.

With parts of Wales in drought since late August, the rest of the country was today declared to be impacted by it by NRW. 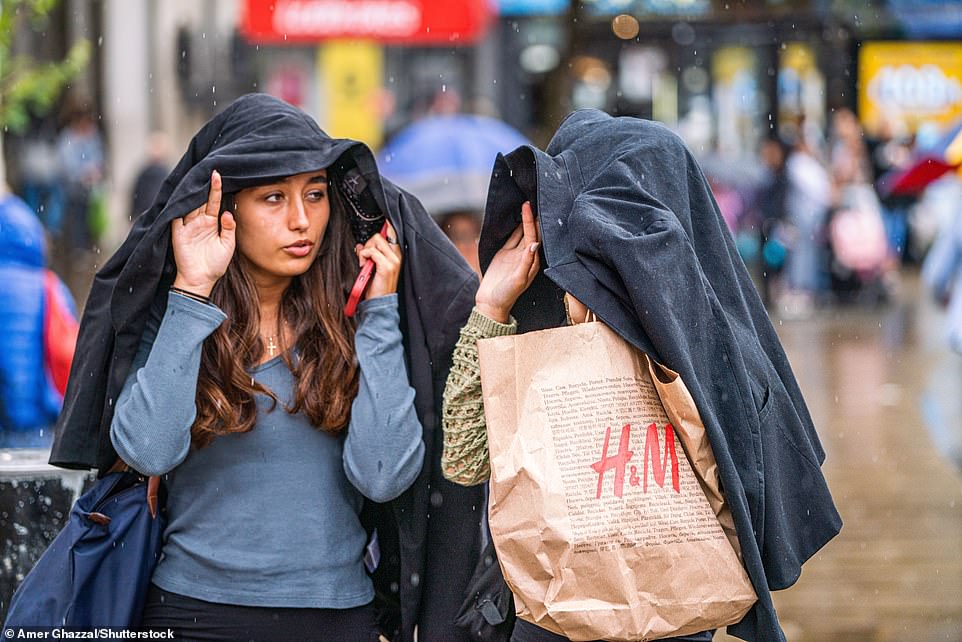 Pedestrians in Wimbledon town centre, south London, are caught in rain showers as torrential rain and thunderstorms are predicted over the coming days

‘Despite heavy recent rainfall in parts of North Wales, the eastern catchments have seen less than 20% of its rainfall for September so far,’ the government agency explained.

‘The river flows in the Clwyd and Dee catchments remain low for the time of year, as does the groundwater levels in this area.

‘Therefore, the recent rainfall has not been sufficient to compensate for the impacts of the prolonged dry weather period over recent months in these parts of Wales.’ 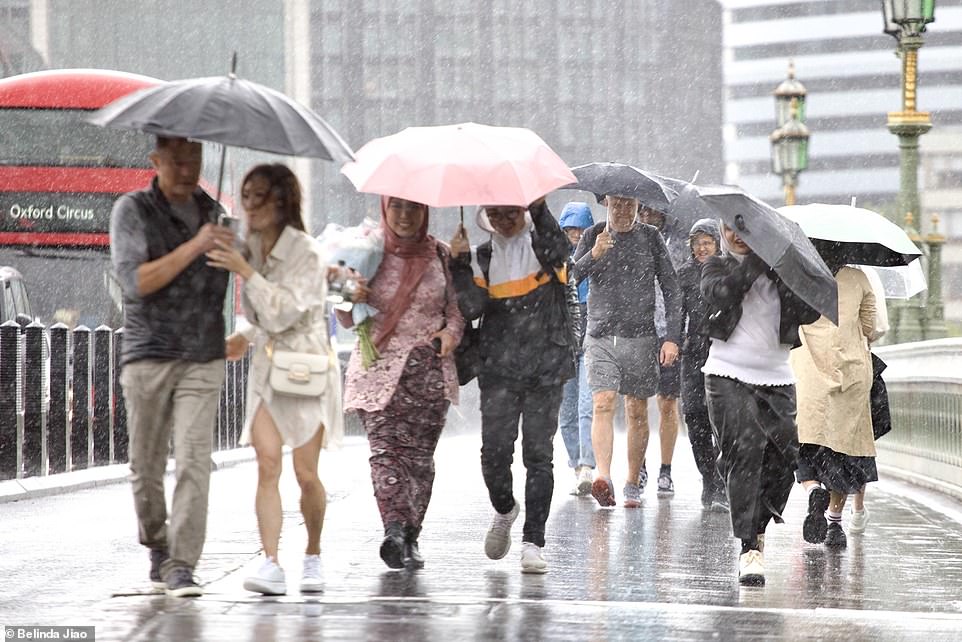 Elsewhere, there is a yellow weather alert for rain in place across the south of Scotland, stretching from Glasgow to Edinburgh and beyond.

Meanwhile, play in the third and final test match between England and South Africa at The Oval was continually postponed throughout the day as rain closed in on London.

Londoners and tourists got caught up in showers today across the capital. 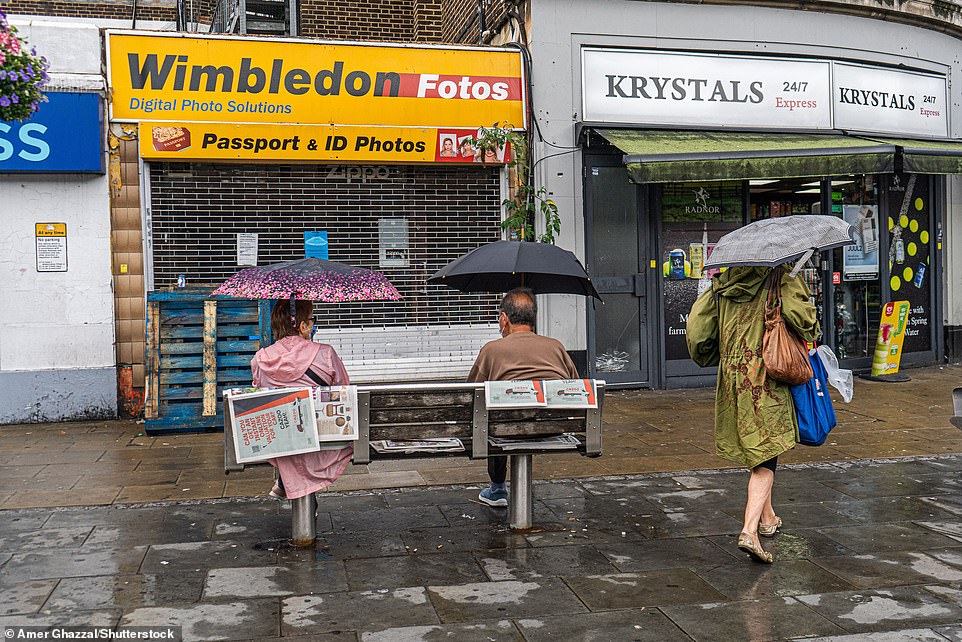 Pedestrians wearing waterproofs and carrying umbrellas in Wimbledon town centre, south London, as they are caught in rain showers

He said that tonight there are likely to be ‘rumbles of thunder in the mix’, with more stormy weather expected to be on the way.

He said heavy rain over the coming days is likely to impact the state of the roads across the country as showers across the south and east look ‘quite frequent’.

‘We have put in place a rain warning covering parts of south Scotland,’ he said. 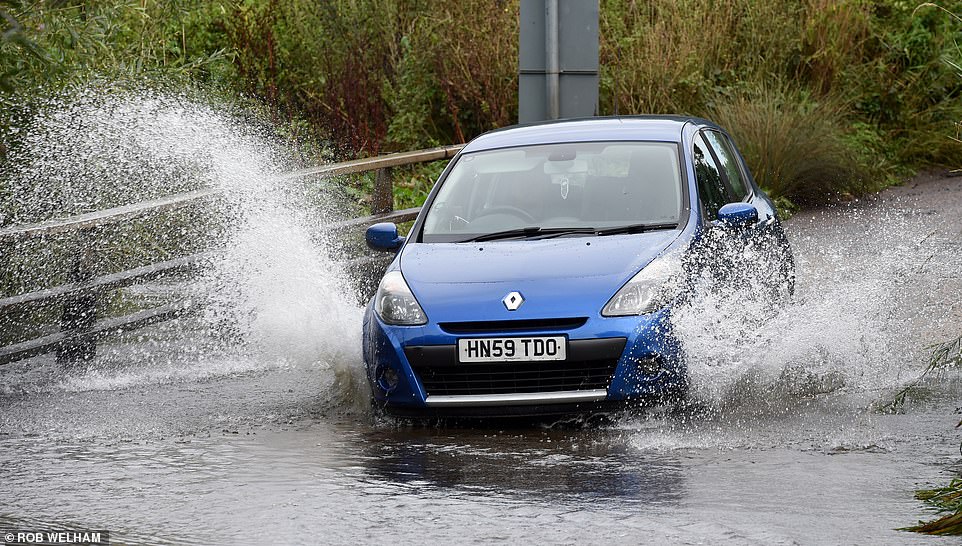 A vehicle drives through flood water at Buttsbury near Ingatestone, Essex on Thursday as further heavy rain was forecast for much of southen England

‘Showers are coming in from the East with around 10 to 15 millimetres expected in an hour’, adding, ‘it could be anything from 20 to 30 millimetres over six hours.’

Meanwhile rivers are being monitored as water levels remain high.

The Met Office forecaster said they are ‘keeping an eye on river activity’ across the country.

It comes as a flood warning was put in place in the South East earlier today. 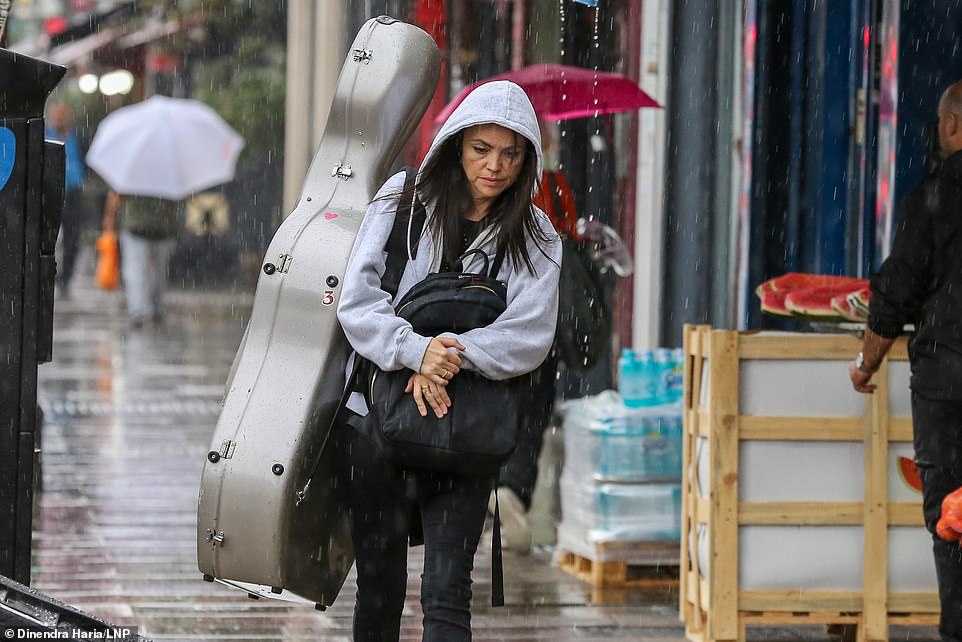 A musician is caught in the rain in north London. Temperatures in London are expected to reach highs of 21 degrees celsius on Friday, with humid conditions continuing through the downpours 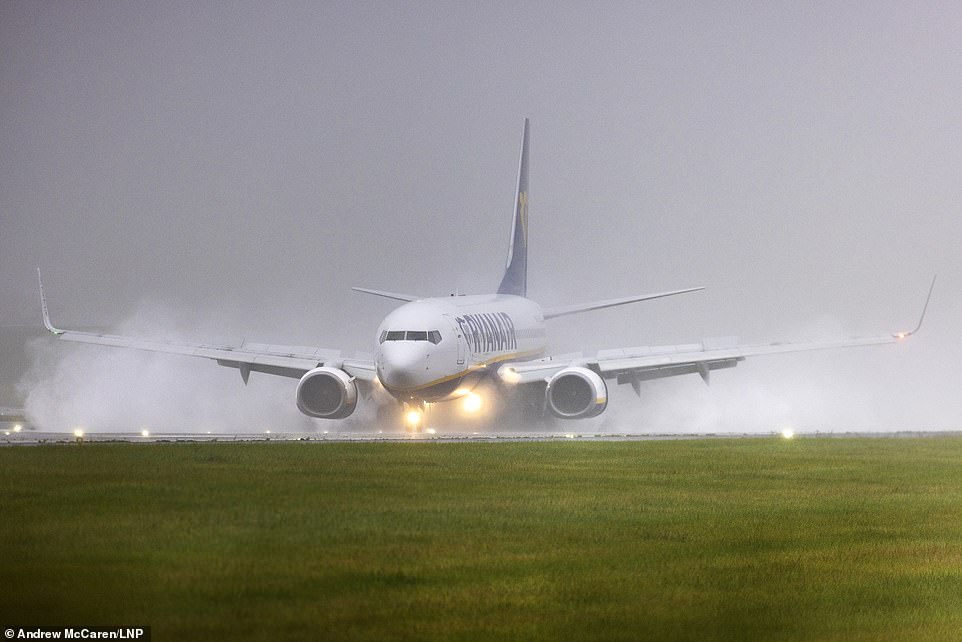 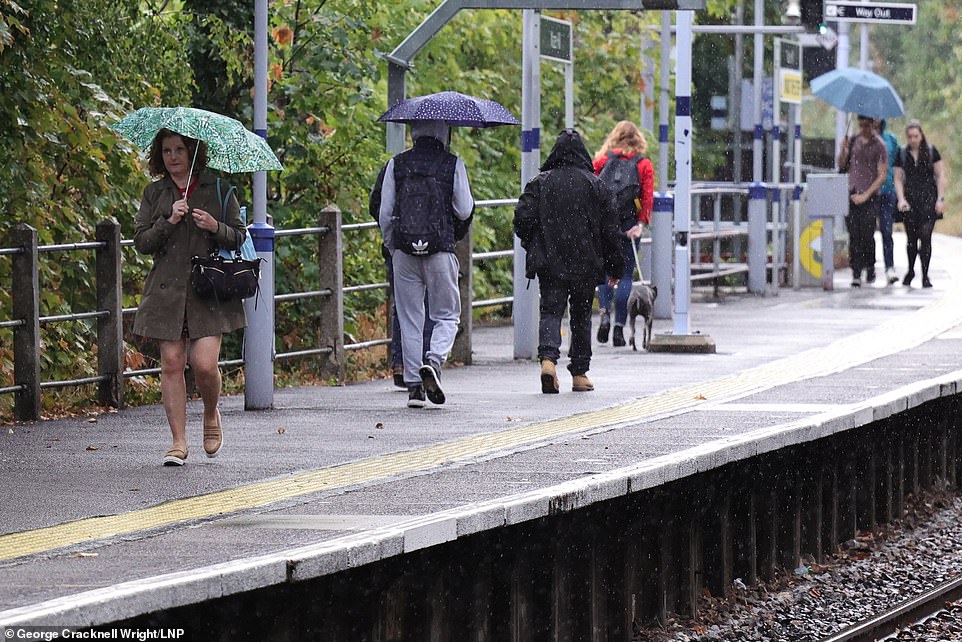 The Environment Agency said: ‘Flooding of properties is not forecast at this point. Further heavy rainfall is forecast over the next 36 hours. We expect river levels to remain high today and tomorrow. We are closely monitoring the situation.’

Earlier this week the Met Office warned that ‘Autumnal weather is moving in’ with low pressure dominating the forecast.

The Met Office predicted that ‘blustery showers will break for a time over the weekend, bringing many a drier day on Saturday.’

Rain across the region and Northern Ireland is predicted to break up during Friday, with a trend towards drier weather with some sunshine.

Temperatures in London are expected to reach highs of 21 degrees celsius on Friday, with humid conditions continuing through the downpours.