Britain’s ‘Summer of discontent’ will continue tomorrow with no trains running across large swathes of the country as drivers walk out in a row over pay – despite enjoying a median salary of £59,000.

Drivers from nine rail companies will walk out of their jobs for a 24-hour period in a row over pay, while other firms are warning there will be a knock-on effect that could cause significant disruption.

The strike will take place on a Saturday, hitting thousands of people travelling to sporting events and those trying to travel on their holidays during the summer break. 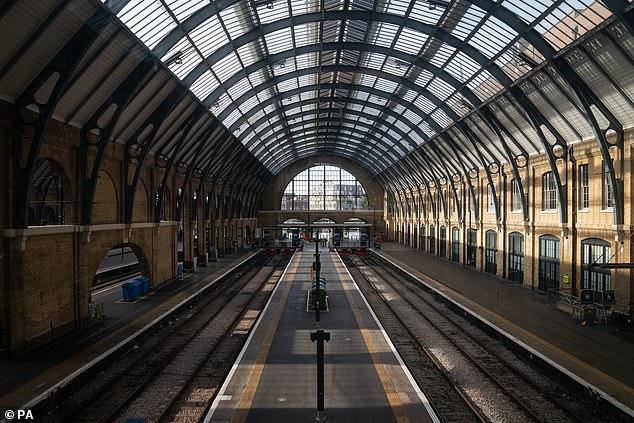 Drivers from nine rail companies will walk out of their jobs for a 24-hour period in a row over pay. Pictured: Empty tracks at Kings Cross

One of the UK’s most popular bands, Coldplay are due to perform at Wembley Stadium on Saturday in front of as many as 90,000 fans – who may be affected by the planned strike.

The announcement was made by Aslef on the same day as other strikes by members of the Rail, Maritime and Transport (RMT) union and Transport Salaried Staffs Association crippled services, with only around one in five trains running and some areas having none at all.

An estimated 6,500 drivers will be taking part.

Last night it emerged junior doctors are also set to strike again unless the Government commits to a significant pay rise.

The British Medical Association (BMA) says it will ballot junior doctors for industrial action following an ‘unacceptable’ pay increase of 2 per cent.

The BMA is calling for a rise of up to 26 per cent, which it claims represents ‘pay restoration’ to the level of wages in 2008, after which point salaries began to fall steeply in real terms due to the cost of living.

The organisation, which represents all doctors in the UK, says its junior doctors are demoralised, burnt out and feeling undervalued.

The decision to ballot members follows ‘deafening silence’ from the Government over the issue of pay restoration, it added.

In a recent BMA survey of junior doctors, 83 per cent said this year’s 2 per cent pay award was ‘completely unacceptable’.

A breakdown of tomorrow’s rail strikes is as follows –

All services across Avanti West Coast routes have been cancelled.

The company is ‘strongly’ advising customers to avoid travelling unless they have to, given a knock-on effect from other operators.

Busy trains, short-notice cancellations and delays are all thought to be likely.

A reduced service of one train per hour is running on the Aylesbury Vale Parkway – Marylebone route between noon and 8pm.

CrossCountry will not run any services on Saturday.

Although its drivers are not striking, services are likely to be ‘impacted’ given industrial action on London Overground and Southeastern. 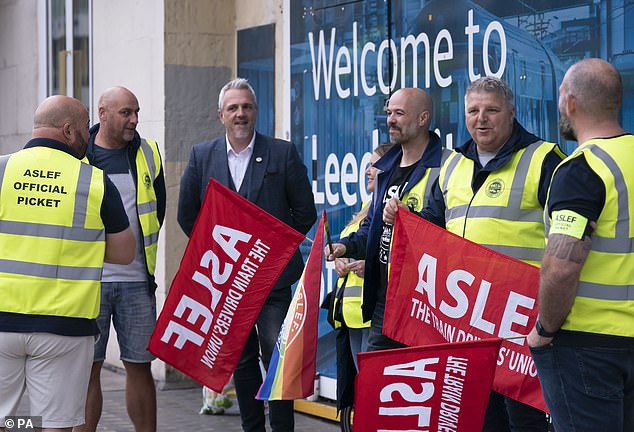 An estimated 6,500 drivers belonging to union Aslef will be taking part. Pictured: An Aslef picket line in Leeds last month

Timetables will start later and finish earlier than normal.

Greater Anglia has asked customers to avoid travelling with their ‘heavily reduced and disrupted’ service.

All Heathrow Express services have been cancelled.

A ‘significantly reduced’ timetable is running, consisting of one service to and from King’s Cross.

No trains are running north from Edinburgh Waverley, while southbound trains are restricted to one every two hours.

No trains are running north from Leeds, while just one train is running south to London King’s Cross.

Although services are running as normal, strikes affecting other operators could make trains busier than normal.

All Southeastern services have been cancelled.

Southern drivers are not involved in Aslef’s strike, but services may be ‘impacted’ given disruption on London Overground and Southeastern.

Stansted Express have advised customers to avoid travelling on Saturday.

One train each way is running between Stansted Airport and London Liverpool Street every hour.

Engineering work means there will be a bus during the journey between Waltham Cross and Harlow Town.

Although not directly affected by strikes, services are likely to be hit by the reduced timetable of other operators.

Customers have been advised to avoid non-essential travel between Carmarthen – Newport, Cardiff – Lydney, Shrewsbury – Wolverhampton, and North Wales Coast, since trains are expected to be busy.

No West Midlands Railway services are running on Saturday.