Britain’s Got Talent singer who reduced Amanda Holden to tears on the show stole £20,000 of theatre cash including Sir Ian McKellen ticket money to fund his gay rights charity

A former Britain’s Got Talent semi-finalist, who reduced Amanda Holden to tears while performing, stole almost £20,000 in cash to fund his gay rights charity.

James Edgington, 39, who starred in the 2010 series of the ITV talent show alongside his father Graham, illegally sold complimentary tickets for a one-man show by Lord of The Rings star Sir Ian McKellen and also diverted proceeds from other productions into his own account.

He was caught when one of his colleagues at the Albert Halls in Bolton, Greater Manchester, discovered the venue’s float was missing £737.

It later emerged that the singer and actor had gone into the safe seven times to steal float money and faked invoices to the producers for £16,539.

James Edgington, 39, who starred in the 2010 series of the ITV talent show alongside his father Graham, illegally stole ‘in excess’ of £19,000 to help fund his organisation the Bolton Pride Charity. Here he is pictured outside Bolton Crown Court

Edgington and his father shot to fame when they brought Ms Holden to tears by singing their version of This is the Moment from the musical Jekyll and Hyde.

The court heard some of the stolen money came from ticket purchases.

Inquiries revealed Edgington had taken a further £2,485 by illegally selling 71 complimentary tickets he had acquired for Sir McKellen’s show on the black market.

The solo show at the concert hall in 2019 marked the actor’s 80th birthday. Tickets sold illegally went for £35 each when they should have been reserved for VIP guests to have for free.

Council officials later claimed the total amount missing following an audit was found to be £20,187 though Edgington insisted the amount he stole was ‘in excess’ of £19,000. 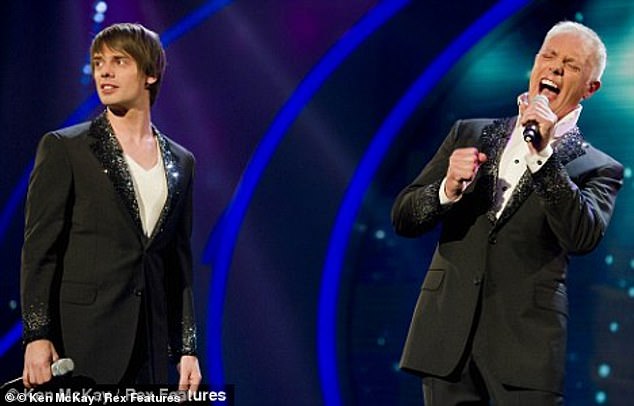 Edgington and his father shot to fame when they brought Amanda Holden to tears by singing their version of This is the Moment from the musical Jekyll and Hyde in the 2010 series of the ITV talent show, Britain’s Got Talent

Edgington, who lives in Tonge Moor, Bolton, used the money to prop up a finance deal with his Bolton Pride Charity which was founded in 2015 and backed by Sir McKellen and Coronation Street actor Antony Cotton.

The singer avoided jail when he was sentenced to 10 months imprisonment, suspended for 12 months, at Bolton Crown Court.

He will have to repay £16,539 as compensation to Bolton council and was ordered to complete 200 hours of unpaid work after he pleaded guilty to fraud, attempted fraud and theft.

Edgington, who has also appeared in the hit ITV series Downton Abbey, currently works as the head of programming at Cumbrian theatre The Coro, where he earns £2,000 a month.

Duncan Wilcock prosecuting said the scam took place between February 2019 and April 2021 while Edgington was working as Theatre and Events Programmes Coordinator at the 670 seater Victorian concert hall, which hosts comedy, dance, music and pantomime shows. 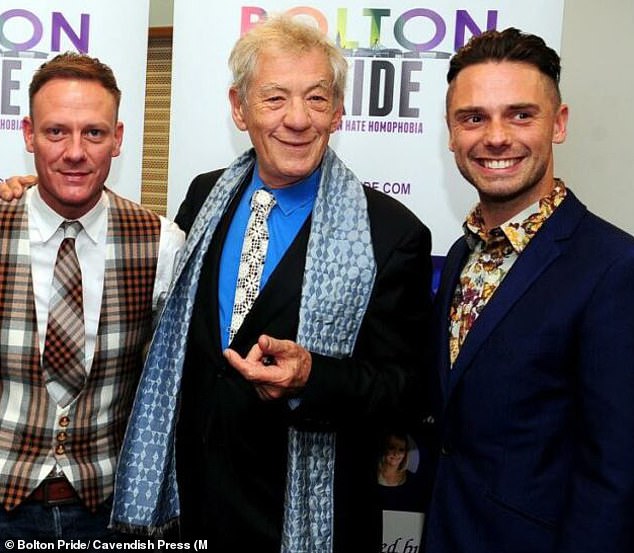 As part of his role, he was in charge of coordinating with producers and chasing up external invoices, but his downfall began in March 2021, when a fellow Albert Hall employee Elaine Gattrick carried out the end-of-year register check and discovered three bags, which contained the venue’s floats were missing a total of £737.

The venue then launched an official investigation into the theft, which focused on workers who had accessed the safe and discovered Edgington had opened it on seven occasions without permission.

After being confronted, the actor admitted to the theft and was suspended after official disciplinary measures were taken against him. 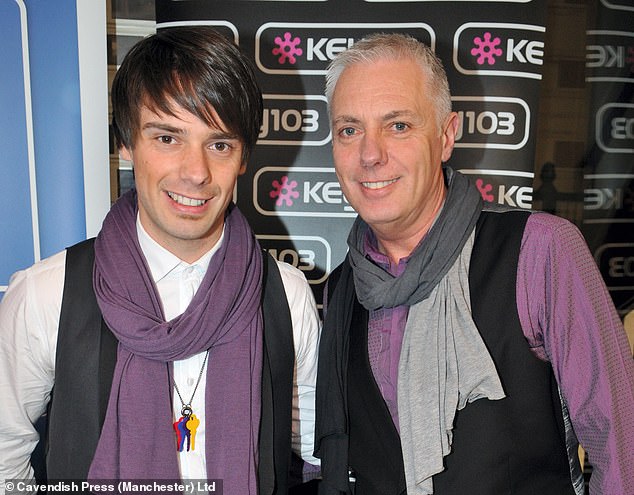 The father and son duo got through to the semi-finals of the talent competition. Edgington was avoided jail after he was handed a 10 month prison sentence, suspended for 12 months

As part of the investigation, the council sought an order to access Edgington’s work emails and it transpired he credited the outstanding bills from external events producers to his own bank account, rather than the council-run venue – even using the concert hall’s letterhead to fake voices.

Edgington resigned from his post in August last year and volunteered himself for an interview with police in which he insisted: ‘I can pay it back tomorrow.’

In mitigation defence lawyer Nick Ross said the theft of the float money was purely for personal gain, and he has since paid back £600 of the £737 total but added: ‘He was under huge financial pressure and at the time he needed to fund the Pride charity he was running due to a big sponsor pulling out, which left the charity £15,000 down. 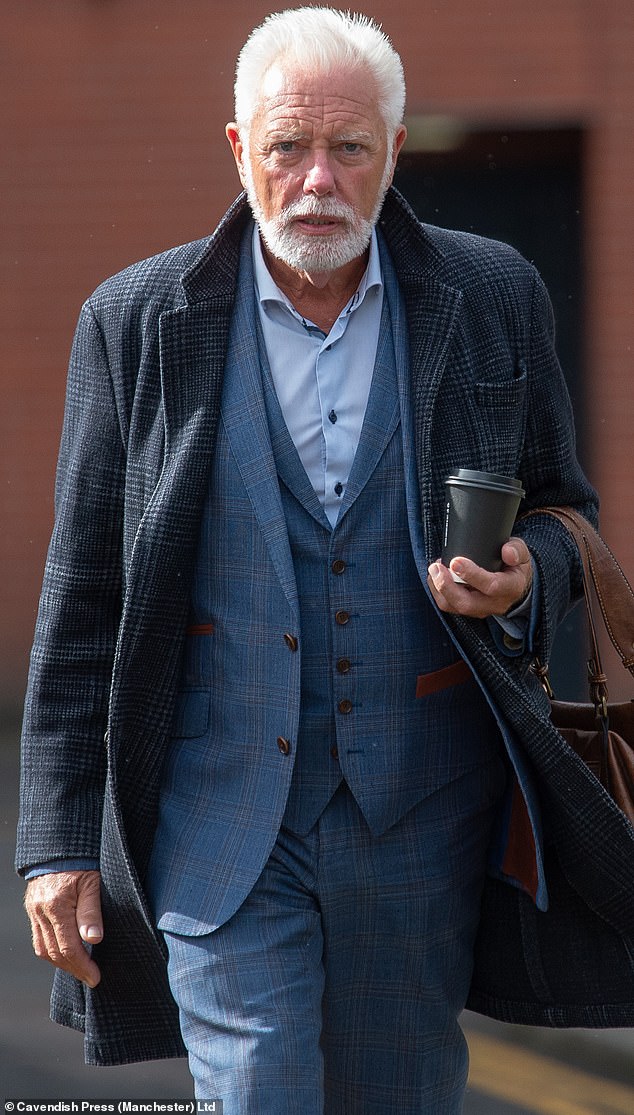 ‘He took out a personal loan to finance Pride but the stolen funds were then used to fill the gaps in finances at the time.’

Mr Ross said Edgington’s grandmother had also fallen ill and added: ‘He suffered a lapse in judgement and in his own words he ‘took his eye off the ball.’

‘His behaviour can be put down to him trying to sort out everything by himself.

‘There was nothing clever, nothing sophisticated about it. He dealt with things in a very foolish and naïve way. He has a hitherto impeccable character.

‘It was his own pride that stopped him from seeking help. It is a cliché is it not, that pride comes before a fall, well this was his pride and today is his fall.’

The court heard Edgington was suffering from depression and was on medication for anxiety. Testimonials on his behalf said he ‘promoted diversity and inclusivity in the Bolton area’ and according to his family and friends, he ‘would do anything for anybody’. 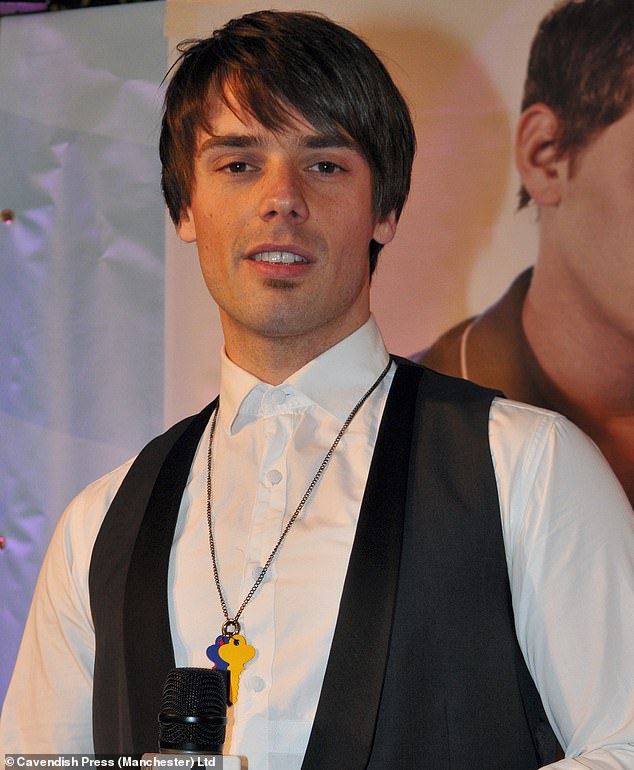 Edgington will have to repay £16,539 as compensation to Bolton council and was ordered to complete 200 hours of unpaid work after he pleaded guilty to fraud, attempted fraud and theft

Sentencing the judge Mr Recorder Nicholas Williams told Edgington: ‘These actions were not just inappropriate but thoroughly dishonest and you abused your position of power and trust.

‘This was not a one-off or a moment of madness but was sustained conduct over a period of time.’

Edgington, who had an interest in the performing arts from a young age, attained a degree in drama from Manchester Metropolitan University.

He previously raised over £100,000 for good causes and also founded a charity called Jen, after his deceased mother Jennifer, which helps widowed fathers deal with bereavement. Jennifer died in a road traffic accident when Edgington was four while he was in the car.

Edgington himself was brought up by a single father, Graham, who appeared with him on Britain’s Got Talent in 2010.

After the case a spokesman for Bolton Council said: ‘The council has a zero-tolerance policy towards fraud or any action which diverts valuable resources away from local taxpayers.

‘Appropriate action was taken as soon as the council became aware of this issue. We have fully supported Greater Manchester Police in their investigation, and we would like to thank them for their work on this case.’