London: Britain is bracing for its first 40-degree day since records began, with concerns the heat wave will place intense pressure on emergency services and transport links after meteorologists issued an unprecedented risk-to-life “red alert” for Monday and Tuesday.

The UK’s national weather and climate service, the Met Office, has forecast an “exceptional hot spell” for the coming days, saying there was a 50 per cent chance that temperatures would top 40 degrees “and 80 per cent we will see a new maximum temperature reached”. 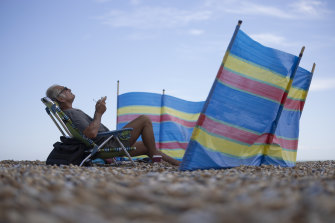 The British summer, set to be one of the hottest on record, has sparked warnings of death and disruption in coming days.Credit:Getty

Met Office chief executive Penny Endersby issued an apocalyptic warning that Britons were “not adapted to what is coming”, with potential effects on energy supplies, food and water, and on schools and some hospital services that may have to close.

The area of high pressure causing the heatwave extends over France, Spain and Portugal, where thousands of firefighters have been battling blazes.

More than 1000 firefighters, supported by water-bombing aircraft, battled two massive fires in south-western France on Saturday (AEST) that had been fanned by scorching heat, tinderbox conditions and strong winds. One tore through forests near Dune du Pilat, Europe’s tallest dune.

Temperatures in Portugal were expected to top 40 degrees in some places as authorities put five districts on red alert for extreme weather. Some 13 fires were burning out of control across the country. 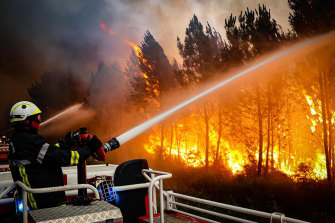 Firefighters work to put out a bushfire near Landiras, near Bordeaux, south-western France.Credit:SDID33/AP

In Spain, the Environment Ministry said firefighters were tackling 17 bushfires. From July 7 to July 13, Portugal registered 238 excess deaths due to the heatwave, its DGS health authority said, according to Reuters.

“We’ve seen when climate change has driven such unprecedented severe weather events all around the world it can be difficult for people to make the best decisions in these situations because nothing in their life experience has led them to know what to expect,” Endersby said.

“Here in the UK we’re used to treating a hot spell as a chance to go and play in the sun. This is not that sort of weather. Our lifestyles and our infrastructure are not adapted to what is coming.”

Temperatures of 41 degrees are forecast at Heathrow Airport, near London – more than two degrees higher than the current record of 38.7 degrees set at Cambridge in 2019. It is the first time 40 degrees has ever been forecast. 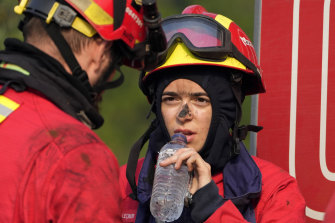 Firefighters take a break after battling a forest fire that flared anew in the village of Lagoa Parada, near Ansiao, central Portugal.Credit:AP

Government scientists are particularly worried about record temperatures forecast for Monday night (GMT), which means people will not get a respite from the daytime heat. The Met Office expects the previous record high minimum overnight temperature of 23.9 at Brighton in 1990 to be beaten.

The conditions have been likened to a 2003 heatwave in France, in which 14,000 mostly elderly people died, sparking warnings from the Professor Chris Whitty, the chief medical officer for England, to be wary of heat exhaustion and heatstroke, especially for older and medically vulnerable people.

The Met Office also warned of a “high risk” of heat-sensitive systems and equipment failing, leading to localise power outages and the loss of services such as water or mobile phone coverage. 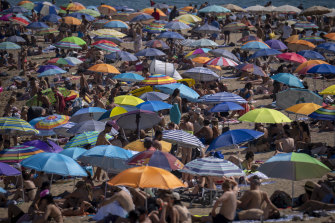 People flock to the beach in Barcelona, Spain, on Friday.Credit:AP

The UK Health Security Agency issued its highest level alert, four, to health organisations, signifying a national emergency. It said the heat would be so extreme that even fit and healthy adults were at risk, urging people to moderate their behaviour to prevent “avoidable” deaths and reduce pressure on hospitals, including by not drinking alcohol.

Matthew Taylor, chief executive of the NHS Confederation, said the NHS would be under intense pressure over the coming days, “with severe bed shortages, ambulance services severely stretched and several health systems around the country having to declare critical incidents”. 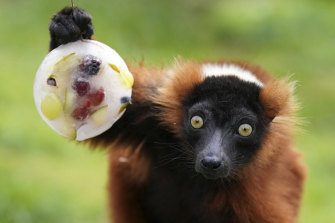 The health department said it recognised ambulance services were under significant pressure, and it was working hand-in-hand with the NHS to reduce delays in handing patients over to hospitals and getting ambulances back on the road.

Cabinet minister Kit Malthouse, who chaired a meeting of the civil contingencies committee – known as COBRA – said the government was preparing for a “surge” in demand on the NHS and other services due to demand levels not usually seen outside winter months.