Digital media company BuzzFeed (BZFD) went public on Monday after a SPAC merger that valued the firm at $1.5 billion, setting it apart from peers like Vox and Vice that remain private.

But some employees aren’t celebrating. The milestone comes days after dozens of workers at the outlet’s news division, which won a Pulitzer Prize this year, walked off the job in protest of a move they say enriches executives while the company refuses a union contract that would raise salaries for employees and bolster worker protections.

BuzzFeed strongly contests that characterization, saying the move to go public will benefit management and workers alike, and that the company is eager to reach a deal with the unionized workers.

The clash marks a flashpoint of worker unrest in the digital media sector, a rare source of union growth in recent years that could draw heightened attention as online outlets begin turning to public markets.

“We are the reason they have a product to take public,” says Addy Baird, a BuzzFeed reporter and chair of the BuzzFeedNews Union, which formed in 2019 and has been bargaining with the company for a contract since that year. “We can’t wait anymore.”

All 61 members of the BuzzFeedNews Union walked off the job last Thursday, the same day the company’s shareholders voted in favor of the plan to take the company public, Baird said. The issues of primary concern for union employees include salary increases, the ability to perform freelance work and post content outside BuzzFeed channels, and the use of traffic metrics in employee evaluations. The union also accused BuzzFeed of needlessly delaying negotiations.

Speaking to Yahoo Finance, the company noted that the union represents a small portion of the roughly 1,100 employees who work at BuzzFeed. As part of the SPAC merger, the company acquired the sports and entertainment publishing company Complex for $300 million, expanding the staff to 1,400, BuzzFeed said.

Contract negotiations were set aside for several months at the outset of the pandemic by emergency talks between management and employees over how to adapt the workplace, BuzzFeed said. The next round of negotiations will take place on Tuesday.

“There’s a bargaining session planned for tomorrow where we look forward to making more progress with the union,” a company spokesperson told Yahoo Finance in a statement. “Today, the company is celebrating an incredible milestone: becoming the first publicly traded digital media company, with Complex Networks in our ranks, and equity for more deals ahead. We couldn’t be more excited about everything that lies ahead for BuzzFeed and its employees.” 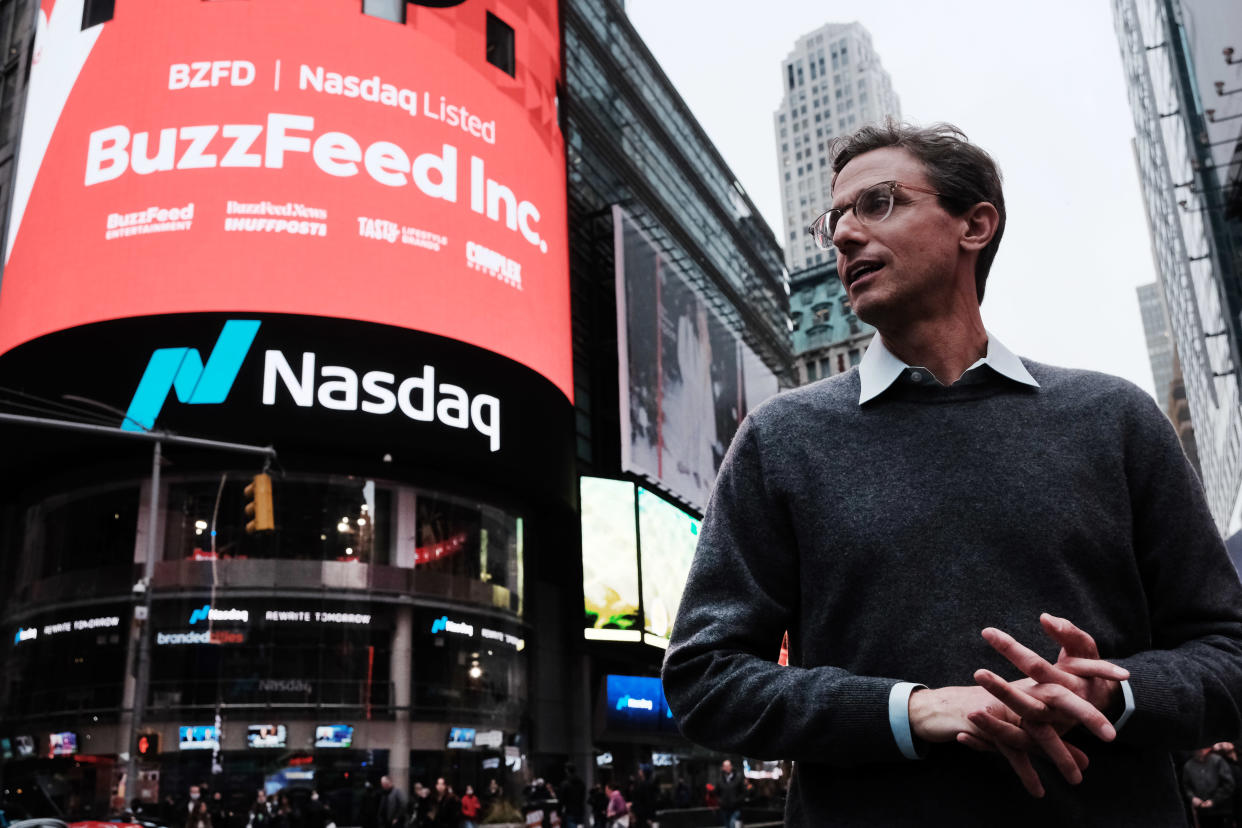 In its latest proposal, BuzzFeed offered workers a $50,000 salary floor and a guarantee of 1% annual raises, Baird said, deriding the terms as below industry standards. In a public statement about the walkout last week, the union highlighted the challenge of living on such a salary in high-cost cities like New York and San Francisco, where some BuzzFeed offices are located.

"It's incredibly frustrating for us," Baird says. "We're for starters asking them to move on their pay minimums. Engage in the process; stop slow-walking it."

BuzzFeed says it has offered an average overall wage increase of 2.5% across the membership of the union, but that individual annual raises would range from 1% upward depending on merit.

BuzzFeed is expecting $521 million in revenue in 2021, including income generated by Complex Systems.

The company expects to raise $16 million dollars from the SPAC deal, after investors pulled 94% of the $287.5 million raised by the SPAC, an updated filing showed last week. The stock price fell slightly in early trading on Monday and was down over 7% as of 2:30 p.m. EST.

The company and the union have reached tentative agreements on a host of non-economic proposals, including remote work as well as health and safety measures, BuzzFeed said.

The BuzzFeedNews Union belongs to the NewsGuild, which represents workers at many publications, including Reuters, Business Insider, and The New Yorker. The workers at BuzzFeedNews are willing to carry out additional protests if the two sides cannot reach an agreement, Baird said.

"We’re clearly able to mobilize quickly and effectively, and will continue to do so until we have a fair, strong contract that we’re ready to ratify," Baird says. "As far as the immediate future, our next big thing is getting to the bargaining table."

Max Zahn is a reporter for Yahoo Finance. Find him on twitter @MaxZahn_.