Recall Gavin Newsom Campaign responds to pushback from California governor: ‘Bring it on’

Randy Economy, senior adviser for Recall Gavin Newsom, calls for a debate with the California governor on the issues.

Standing in the dry, cracked bottom of Lake Mendocino, Gov. Gavin Newsom declared a drought emergency Wednesday in two Northern California counties where grape growers and wineries are major users, an order that came in response to arid conditions affecting much of the state and the U.S. West.

The declaration is targeted to Mendocino and Sonoma counties, where drought conditions are especially bad, rather than statewide, as some officials and farmers in the agricultural-rich Central Valley had hoped. But the Democratic governor said a broader drought declaration could come as conditions change.

California, which is now in its second year of drought, is bracing for another devastating wildfire season after a winter with little precipitation.

“Oftentimes we overstate the word historic, but this is indeed an historic moment, certainly historic for this particular lake, Mendocino,” Newsom said, standing where 40 feet (12 meters) of lake water was supposed to be. The lake is at about 40% of normal capacity.

About three-quarters of the American West is in what is called a megadrought, with critical waterways like the Colorado River and Rio Grande that supply millions of people and farms expected to have dismally low flows this year. The White House on Wednesday announced the creation of a working group helmed by the Interior and Agriculture departments to address worsening drought conditions in the U.S. West. 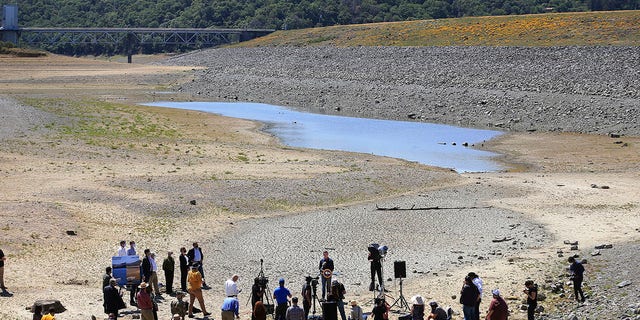 California Gov. Gavin Newsom holds a news conference in the parched basin of Lake Mendocino in Ukiah, Calif., Wednesday, April 21, 2021, where he announced he would proclaim a drought emergency for Mendocino and Sonoma counties. (Kent Porter/The Press Democrat via AP)

Last week, hundreds of farmers who rely on a massive irrigation project spanning the Oregon-California border were told they’ll get a fraction of the water they need as federal regulators attempt to balance agriculture with threatened and endangered fish species central to the heritage of several tribes.

In California, the two counties spotlighted by Newsom are part of the Russian River watershed, which is about 110 miles (177 kilometers) long. Lakes Mendocino and Sonoma are the primary sources of water for residents and commercial users like wineries, and together they provide water for about 600,000 people, said Grant Davis, general manager for Sonoma Water.

Beyond the drought declaration in the two counties, Newsom’s executive order allows California to prepare for expected effects of the water shortage statewide more quickly.

CLIMATE-DRIVEN ‘MEGADROUGHT’ IS EMERGING IN WESTERN US, STUDY SAYS

Though he did not declare a statewide drought emergency, the State Water Resources Control Board in March sent early warnings to 40,000 water rights holders urging them to start conserving. The board suggested that agricultural users reduce irrigation and seek other water sources and that people in cities and towns put in drought-resistant landscaping and replace household appliances with water-saving ones.

“If you’re in a different part of the state, you probably need to know that this will one day happen to you,” Karla Nemeth, director of the California Department of Water Resources, said of the drought declaration.

The department says this is California’s fourth-driest year on record, especially in the northern two-thirds of the state. But Newsom said people in cities also are using 16% less water than they were at the start of the last major drought, which lasted from 2012 to 2016. That drought prompted then-Gov. Jerry Brown to impose broad restrictions on water use that affected nearly everyone in the nation’s most populated state. 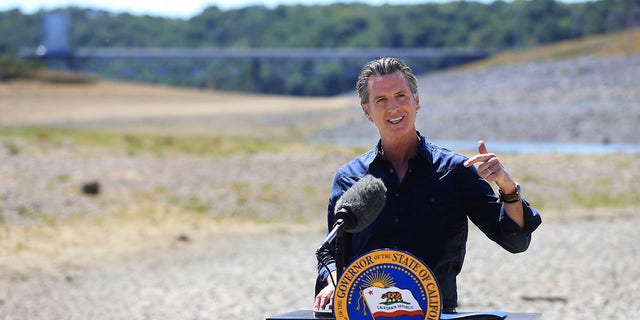 California Gov. Gavin Newsom speaks at a news conference in the parched basin of Lake Mendocino in Ukiah, Calif., Wednesday, April 21, 2021, where he announced he would proclaim a drought emergency for Mendocino and Sonoma counties. (Kent Porter/The Press Democrat via AP)

Farmers and leaders in the agricultural Central Valley are still hoping for a statewide declaration.

“Most folks, they just try to patchwork their operations and make it through, but having another significant drought so soon is definitely something that hurts those operations,” he said.

Nemeth, of the Department of Water Resources, said an emergency declaration isn’t yet necessary in the valley because users have access to multiple sources and streams of water, unlike in the Russian River watershed. The executive order will not increase the allocation for valley farmers, but it will make it easier to transfer water, she said.

“We’re managing the system just very, very tightly, but there aren’t emergency powers that we need to do the things that would help the valley,” she said. 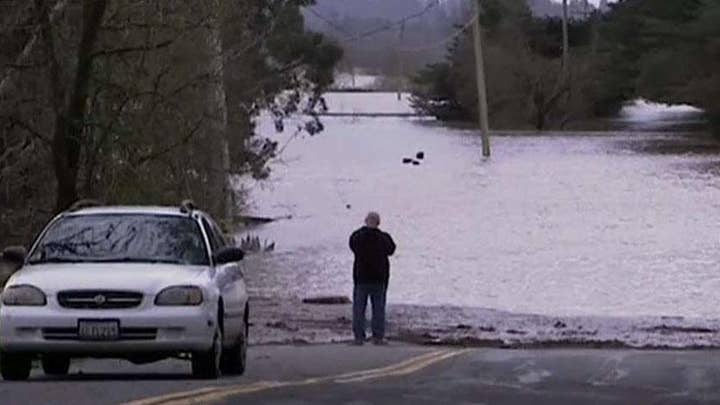 Under Wednesday’s order, the state Water Resources Control Board power can curtail water rights in those counties if major users do not voluntarily begin to conserve. Some of the largest commercial water users in the region are grape growers and wineries. Local governments could place restrictions on residential water users as part of the conservation effort.

The Russian River watershed is unique in that it relies much more on snow and rain as it is “geographically isolated” from larger water systems, said Wade Crowfoot, the state’s natural resources secretary.

Without aggressive conservation, the lake is likely to be extremely low by October.

Elsewhere, local water districts are already taking action to address dry conditions. In Marin County, which neighbors Sonoma, water officials voted Tuesday to require residents to reduce water use through measures such as not washing vehicles at home or filling backyard pools. People could face fines for violations.

Newsom said he’s not anticipating issuing mandates but said he’s planning for everything.

california, D, Gavin, gov, Newsom
You may also like: