A California man alleges he lost full use of his right arm after a police K-9 violently latched onto it during a 2020 arrest stemming from an erroneous report of a stolen rental car, according to a federal lawsuit.

Ali Badr, 42, of Oakland, filed the civil lawsuit last month against the city of San Ramon, its police chief, Craig Stevens, and seven officers, following the Dec. 20, 2020, stop of a 2017 Toyota Camry that Badr was renting.

The car was reported stolen by its owner, the lawsuit said. But an attorney for Badr, Matthew Haley, told NBC News his client had only fallen behind on a payment.

The lawsuit accuses police of using excessive force and violating Badr’s civil rights, when Officer John Cattolico, the dog’s handler, released the animal. Badr was complying with police orders and not posing a threat to them during the 6:20 p.m. traffic stop, the lawsuit said.

Badr’s subsequent apprehension was partly captured on police video released this week by Badr’s attorney to the San Francisco Chronicle. 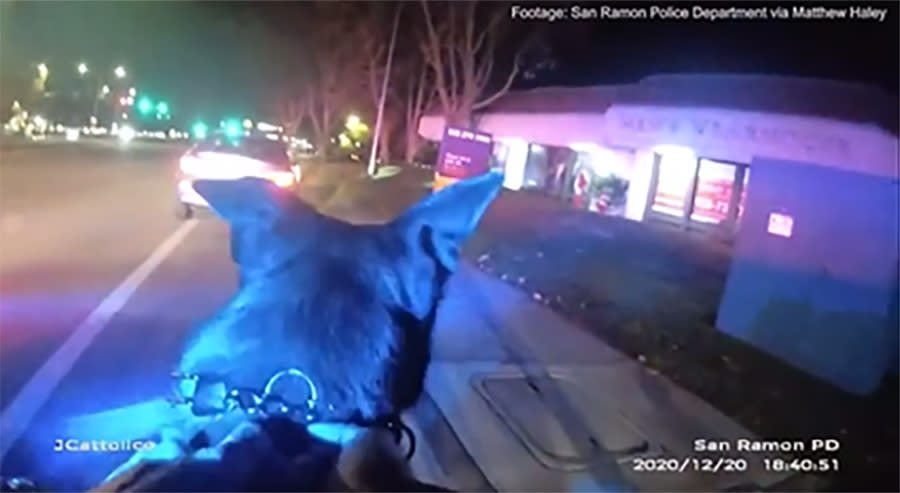 The complaint, seen by NBC News, says the K-9 violently bit Badr’s arm for about a minute.

“With the K-9 still latched onto BADR, ripping and tearing at his arm and hand while BADR screamed in pain, CATTOLICO walked toward Plaintiff while removing his service weapon and pointing it directly at BADR’s face,” the lawsuit said.

According to the lawsuit, Cattolico then grabbed Badr’s left arm, while the dog’s teeth were still sunken into Badr’s other arm, and threw Badr to the ground. The officer then knelt on Badr’s back, and grabbed his neck and forced him face-down on the pavement while two other officers also knelt on Badr’s back as he was handcuffed, the suit said.

“The police K-9 was allowed to continue biting the Plaintiff for over 50 seconds,” the lawsuit said.

During the traffic stop, all officers named as defendants pointed their guns at Badr. No officers intervened during the dog attack, the lawsuit said.

Officials with San Ramon, including Police Chief Stevens and Mayor David Hudson, did not respond to requests for comment Tuesday. NBC News has not seen Badr’s arrest report and officials on Wednesday did not immediately respond to a request for a copy.

It was unclear if any of the officers who responded to the traffic stop were disciplined.

Cattolico could also not be immediately reached.

Badr declined to comment on Tuesday. The immigrant from Egypt worked as an Uber driver, Haley said. Badr used the rental car in his job with Uber Eats, Haley said Wednesday.

“It’s had a significant effect on him, both physically and mentally. He’s still in shock from the whole thing. He’s been unable to come to grips with it,” Haley said. “The video speaks for itself. It was just completely uncalled for. There was no reason to release that dog and then allow the dog to remain with him on the ground.”

Video of the traffic stop posted by the San Francisco Chronicle shows an officer restraining a dog while yelling orders, telling the alleged suspect to get his hands out of the window and then put his hands in the air. It is unclear what happened prior to the video being recorded.

Once the man is out of the vehicle, the dog is released and the man is heard screaming.

After the dog is released, the man asks police repeatedly, “What I did? What I did?”

After he is handcuffed, he asks police again, “What I did? I just want to know,” according to the video.

Badr has not regained full use of his right arm, the lawsuit said.

The lawsuit also names as defendants the rental car’s owner, John Blomeke, CEO an co-founder of CarMommy Rentals LLC. The company is based out of San Jose, Calif.

Another company was involved in the car rental, Hyrecar Inc., based in Los Angeles, the lawsuit said. The companies and Blomeke were negligent and also responsible for Badr’s injuries, according to the lawsuit.

A representative of Hyrecar declined comment Tuesday. Blomeke could not be reached. Blomeke incorrectly reported the car stolen, according to the lawsuit.

The defendants had a duty to ensure Badr “would not be a subject to a false stolen vehicle report,” the lawsuit said.

Following his detainment, Badr was hospitalized and received dozens of stitches on his arm, according to Haley. The case was never pursued for prosecution by the Contra Costa County District Attorney’s Office, Haley said.

No one with the office responded to a request for comment Tuesday afternoon on if police recommended charges.