Can this man stop lying?

Christopher Massimine is trying not to lie.

He’s trying not to lie when his wife asks him whether he has sorted the recycling, or when his mother-in-law’s friend Mary Ann asks whether he liked the baked appetizers she brought over.

He’s trying not to lie to his therapist, who has him on a regimen of cognitive behavioral therapy to help him stop lying. 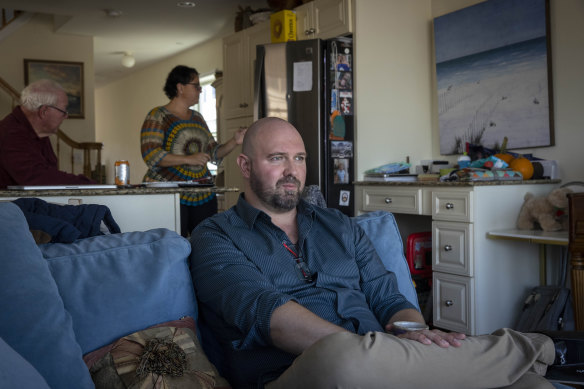 And he’s trying not to lie to me, a reporter who has come to interview him about how a lifetime of lying caught up with him.

This effort began around 15 months ago, when Massimine resigned from his job as managing director of the Pioneer Theater Company in Salt Lake City after a local journalist reported that he had embellished his resume with untrue claims.

The resume, it turned out, was the tip of the iceberg.

Over the course of many years, he has since acknowledged, he lied prolifically and elaborately, sometimes without any discernible purpose.

He told friends he had ascended Mount Everest from Tibet (he was actually in a hotel room in Cambodia) and attended the Burning Man in Nevada (on closer examination, his photographs proved to have been taken in Queens).

He told journalists he was born in Italy. (New Jersey.) He told school friends his birthday was in September. (May.) He told his wife he was having an affair with Kourtney Kardashian. (Not true.)

When his binge of lying was exposed, it left Massimine’s life in tatters, threatening his marriage and discrediting his early success in the world of New York theatre. 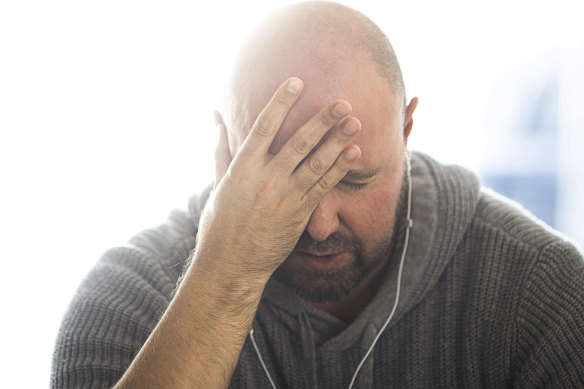 Christopher Massimine, whose compulsive lying derailed his career, maintains that it’s a mental illness that has dogged him since childhood.Credit:New York Times

He spoke to The New York Times to address what he described as a fundamental misunderstanding: These were not the lies of a calculating con artist, but of a mentally ill person who could not help himself.

Just before his fabrications were exposed, Massimine checked into a psychiatric hospital, where he was diagnosed with a cluster B personality disorder, a syndrome that can feature deception and attention-seeking. For many of the people close to him, a diagnosis made all the difference.

“He’s not just a liar; he has no control over this,” said his wife, Maggie, 37, who admitted that, at several points, she had considered filing for divorce. “That really was the turning point for me, when I had an understanding of it as an illness.”

Since then, she has thrown herself into the project of helping her husband recover. “It’s similar to Tourette’s,” she said.

“You acknowledge that it’s their illness that’s causing them to do this, and it might be a little odd and uncomfortable, but you move past that.”

Maggie remembers, with painful clarity, the day in 2018 when she realised the breadth and depth of her husband’s problem.

He had attached a photograph of two men, a Sherpa and a fair-haired alpinist, with Himalayan peaks looming in the background. He had managed to sneak into China with the help of kind Buddhist monks, who led him as far as Everest Camp 2, he told her. “This is Tsomo,” he wrote. “He is awesome and if he comes to the USA you’ll love him.”

Maggie stared at the picture; it didn’t make sense.

Massimine, her husband of five years, had told her he was on vacation in Cambodia. He had not given himself time to acclimate to the elevation of Everest Base Camp; he had no mountaineering experience; he didn’t have a Chinese visa.

“At first, I thought, ‘Why is he posting this when it could get him killed?’” she said. “And then, the crazier his posts got, I was like, ‘This isn’t real. None of this is real.’”

That weekend, with help from her friend Vanessa, she began a “deep dive,” reviewing all of his Facebook posts and email accounts. She discovered elaborate deceptions — voice impersonators, dummy email accounts, forged correspondences.

She was terrified, she said. “Who is this person?” she recalls thinking. “Who did I marry?”

Massimine grew up on a cul-de-sac in Somerset, New Jersey, the only child of a nurse and an auditor. His flair theatre emerged early — at 10, he wrangled the members of his Cub Scout troop into performing “A Knight’s Tale,” a play he wrote and scored.

The lying started early, too. He says it began in the second grade, when, nervous about bringing home a B plus in math, he told his parents that he had been invited onto the stage at school to sing a duet with an actor from The Lion King.

Lying became a “defence mechanism,” something he did to calm his anxiety.

In interviews, friends recalled this behaviour, which they described as “tall tales” or “embellishments” or “campfire stories.” It never seemed malicious, said Jessica Hollan, 35, who was cast opposite him in a middle school production of A Midsummer Night’s Dream.

“It was more just like, you caught a minnow, and then it became a swordfish,” she said. 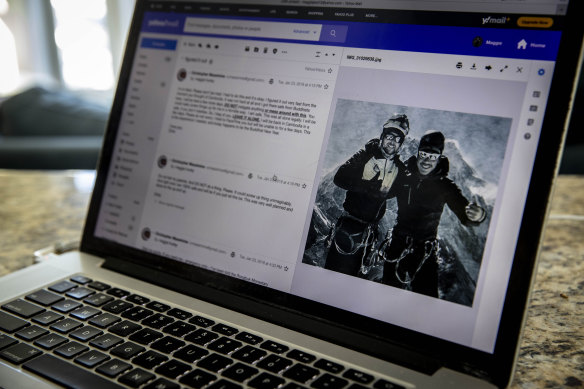 Emails sent by Christopher Massimine to his wife Maggie in 2018 in which he pretended to be in Tibet on Mount Everest.Credit:New York Times

No one called him out on it, said Lauren Migliore, 34, who got to know him in university. She recalled him as a loyal, affectionate friend but sensitive and needy, “like a little puppy”.

By the time he met Maggie, Massimine was a successful theatre producer with a tendency to extreme workaholism. Co-workers recalled his pulling all-nighters as productions approached, sometimes forgetting to shower or change clothes.

This intensity propelled him upward through the industry; at 29, he was named CEO of the National Yiddish Theatre Folksbiene, where he laid the groundwork for a runaway hit, a production of Fiddler on the Roof in Yiddish.

But it hadn’t been good for the marriage. Now, Maggie understood that her husband’s work habits were not her only problem. They separated for a few months. Then she softened — maybe, she told herself, he was lying because she made him feel inadequate — and they got back together. He started therapy and went on an antidepressant medication.

They spent months sifting through everything he had ever told her about his life, “just figuring out fact from fiction,” she said.

In October 2019, the year after the Tibet lie fell apart, Massimine called Maggie in a state of breathless excitement. There was news: He had won a Humanitarian of the Year Award, from a group called the National Performing Arts Action Association.

The couple had just moved to Salt Lake City, where he had been named managing director of the Pioneer Theatre Company at the University of Utah. Things weren’t going well at work, where, as he put it, “the people who were supposed to be listening to me weren’t listening to me”.

Aggrieved and raw, he reached for an old solution. It was a deception that went beyond what he had done in the past, and he needed Maggie on board. “I felt like, you know, this was a very big lie, and I want to make sure I got everyone on board, so that it feels like it’s a real thing,” he said. 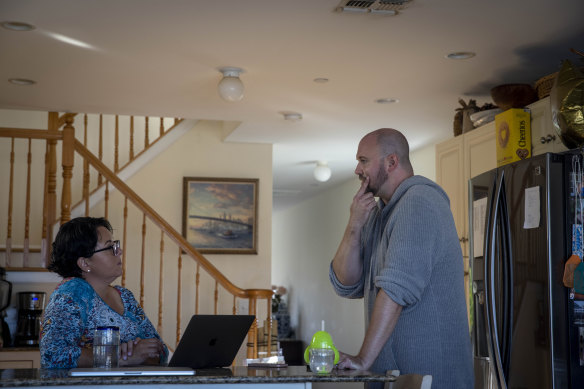 Christopher Massimine talks about his facial ticks with his wife at home in Queens.Credit:New York Times

Maggie was, frankly, dubious. But then he flew to Washington for two days, coming back with a medal and photos that appeared to show him at a White House podium. “I was like, ‘OK, I guess he really did get this award,’” she said. “Like, he came back, and he’s got an award.”

His new co-workers were keeping closer track. In his first month on the job, he asked colleagues to secure him a last-minute observer pass to a UN conference, then claimed that he had been a keynote presenter, said Kirsten Park, then the theatre’s director of marketing. It seemed like an “enormous exaggeration,” but then again, it was theatre, she said: “Everybody expects a little bit of fluff.”

She watched him giving interviews to reporters and describing a career of dazzling breadth and achievement. When he brought Park a news release announcing his Humanitarian Award, she searched for the organisation, then the award, online, and found nothing.

“I absolutely thought it was a lie,” she said, but hesitated to report her doubts to superiors.

Massimine’s behaviour became harder to ignore in 2021. He began posting amateurishly written articles — he now admits paying for them — that described him in even more grandiose terms: He had been a vice chair of Mensa International, a consultant to Aretha Franklin and a minority owner of a diamond company. 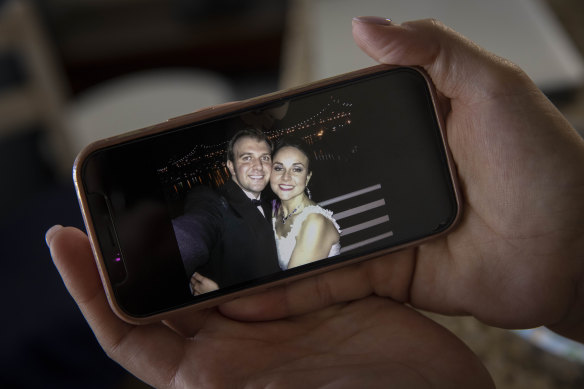 Maggie Massimine shows a photo from her wedding in 2013 to Christopher Massimine.Credit:New York Times

Then it all blew up. In a painful conversation with university officials, Massimine learned that a group of staff members from the theatre had filed a grievance about him, alleging mismanagement and absenteeism, and that a reporter from the local Fox affiliate was preparing an exposé on his fabrications.

Maggie recalls these days as the scariest she has ever lived through. Finally, she drove Massimine to the university hospital’s psychiatric unit, where he checked in for the first of three brief stays.

Dr. Jordan W. Merrill, a psychiatrist who treated Massimine in Utah that year, recalled him as exceptionally fragile during the weeks that followed.

“There are times, as a psychiatrist, we have patients where we really worry we’re going to get a phone call the next morning that they are dead,” he said. “There was a period that he was that person.”

Lying had not been a focus of Massimine’s psychiatric treatment, but now the doctors swung their attention to it. Merrill described Massimine’s fabrications as “benign lying,” which functioned mainly as “a protection of his internal fragility.”

“It’s not seeking to take something from you, it’s about just trying to cope,” Merrill said.

For Maggie, the diagnosis made all the difference. Massimine’s doctors, she recalled, “sent me to psychology websites and really walked me through it so I could have a better understanding.” As she came to see his actions as symptoms of an illness, her anger at him drained away.

The diagnosis also mattered to his employer. Massimine negotiated a $US175,000 settlement with the University of Utah in which neither party acknowledged wrongdoing, according to The Salt Lake Tribune, which acquired the agreement through a records request.

The Massimines sold their large Victorian house in Salt Lake City and moved in with Maggie’s parents in the New York City borough of Queens.

These days, Massimine meets weekly with a therapist, unpacking the moments when he felt a strong urge to fabricate. He says he quiets the urges by writing, posting often on social media. When he finds himself on the edge of a group of people swapping stories, he steels himself, takes deep breaths and tries to stay silent.

Recently, the Massimines closed on a modest three-bedroom house in Hamilton Beach, a middle-class neighbourhood in Queens overlooking Jamaica Bay. It’s a long way from the world of theater, and the life they had envisioned when they went on their first date, at the famed New York restaurant Sardi’s.

Early this month, as he watched their 20-month-old son, Bowie, kick a soccer ball across their narrow backyard, Massimine seemed impossibly far from that old world. He spoke, a little wistfully, about the fictional Chris, the one he has had to relinquish.

“There was this wonderful character of me, and he did things nobody else could do,” he said. “In some ways, I’m sad to see him go.”