Here we go again. Victorians know the drill, but that does not make it easier. This seven-day lockdown is an abrupt reminder that every day we can go about our lives relatively free of restrictions is a good one.

For a state that was just getting its confidence back, this will be a major setback. Without the fallback of JobKeeper, the employment surge that has been driving the economic recovery is likely to take a hit. Many thousands of businesses will be shutting their doors again and for some, perhaps, it will be for the last time. 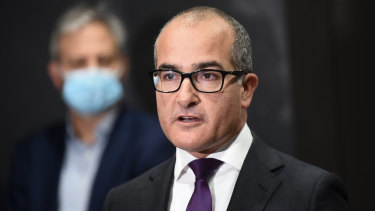 A year ago, Victoria was heading towards a second wave that resulted in many deaths and a lockdown that eventually went for 112 days. This one should be different. Even before the much-anticipated announcement on Thursday, people had curtailed their movements, particularly into and around the CBD. The government’s contact tracers have already called on more than 10,000 people to self-isolate. More than 40,000 people were tested for COVID-19 on Wednesday – a record.

This should make a difference. But for all the lessons learnt, there are structural problems that are not being faced. This lockdown will encourage more people to get vaccinated, and if there is a silver lining in this latest outbreak, it is that our complacency about vaccination is likely to end. Our rollout has been too slow and the foolish idea that there’s no rush to get the jab because there are few cases is naive.

The tide does appear to have turned. More than 32,000 people were vaccinated on Wednesday, the second day in a row the figure tipped 30,000, bringing the total number of doses since the start of the rollout to 1,001,455.

The other standout challenge is the obvious flaws in Australia’s hotel quarantine. Put bluntly, hotels are not fit for this use. They should always have been a temporary measure that as time and the pandemic wore on were replaced by purpose-built facilities. What is perplexing is that we have, for all to see, a much better model that has a record of doing a better job than hotels in containing the virus. Once a dormant mining camp on the outskirts of Darwin, the Howard Springs quarantine facility, which was run until earlier this month by the Commonwealth, is the gold standard in Australia.

And yet, for all the advantages of such a system, the Commonwealth has been unwilling to replicate that model in any other state or territory. Instead, it has continued to back the second-rate hotel quarantine system that has seeded at least one outbreak in almost every state that has led to a lockdown. And even as the Morrison government backs the “99.9 per cent” effective hotel quarantine system, it has refused to enforce a national set of standards based on the best practices.

The chair of the Coalition for Epidemic Preparedness and the head of the federal government’s hotel quarantine inquiry, Jane Halton, told 3AW this week: “I am actually really alarmed that all the lessons which have now been implemented in the Victorian quarantine arrangements … may not have been implemented here [in South Australia]. We shouldn’t be learning these lessons over and over again.”

But that is exactly what we are doing. Lessons are not being learnt. Best practice is not being implemented universally across Australia. And the result is the continuation of outbreaks. The virus is moving constantly, mutating into more infectious forms, but our policy is stuck in decisions made in haste 14 months ago.

Enough is enough. Prime Minister Scott Morrison has indicated he supports Victoria’s proposed new 500-bed quarantine facility in Mickleham or Avalon. In other signs of progress, Victoria has been given access to the Commonwealth land to do more detailed assessments and is ready to seek expressions of interest from the private sector to build the facility.

Meanwhile, Victorians are once again paying the price for a quarantine system that is not up to scratch. It is going to be many months before enough Australians are vaccinated to safely open the country up again.

Until that time, the federal government must ensure every quarantine hotel in every jurisdiction adheres to best practice, and that it supports all efforts to quickly expand access to purpose-built facilities.

The Age’s editor Gay Alcorn writes an exclusive newsletter for subscribers on the week’s most important stories and issues. Sign up here to receive it every Friday.

Canberra, Do, Everything, It, must
You may also like: