Couple who featured on episode of Can’t Pay? We’ll Take it Away! win ‘substantial damages’ from Channel 5 after they launched legal action over use of private information

A couple who featured on an episode of Can’t Pay? We’ll Take It Away! has won ‘substantial damages’ from Channel 5 after they launched legal action.

Keith Wain and Julie Kelly, who were filmed in 2017, brought legal action against Channel 5 Broadcasting Limited claiming a ‘grave’ misuse of their private information.

On Monday, the High Court heard the pair were shown ‘in a state of considerable distress’ in the episode viewed by 6.7million people between 2017 and 2020.

In 2002, Mr Wain borrowed money from a private individual to invest in a business that failed, meaning he was unable to repay the loan and was subject to a county court judgment. 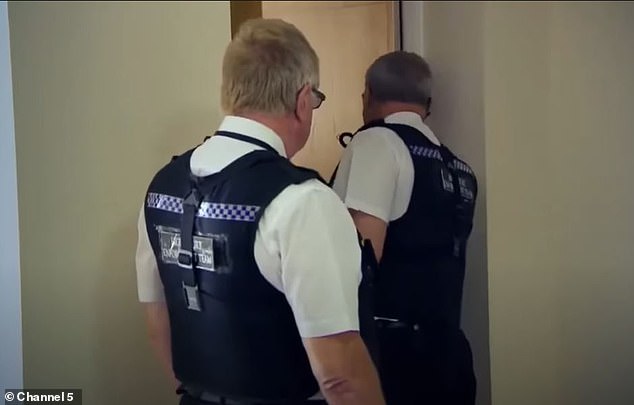 Keith Wain and Julie Kelly, who were filmed in 2017, brought legal action against Channel 5 Broadcasting Limited claiming a ‘grave’ misuse of their private information. Pictured: Scene from Can’t Pay? We’ll Take It Away

While the lender had agreed not to pursue the payment, in May 2017 High Court enforcement officers unexpectedly arrived at the couple’s house accompanied by a film crew.

Alex Cochrane, for the couple, told the court: ‘He made it clear that the film crew was not to enter his home or to film him or Ms Kelly.

‘They knew from Mr Wain’s refusal to permit them entry that he did not want them to film him, the inside of the home he shared with Ms Kelly or what took place in the home.’

However, the pair were recorded by the enforcement officers’ body cameras and the footage was later used in the programme.

The episode in series five of Can’t Pay?, We’ll Take It Away! was initially seen by 2.5million people with Mr Wain and Ms Kelly’s faces shown, and a further 4.2million people watched an edited version where their faces were blurred and names removed.

The couple took legal action against Channel 5 and a statement was read to High Court judge Mrs Justice Collins Rice after the parties agreed a settlement. 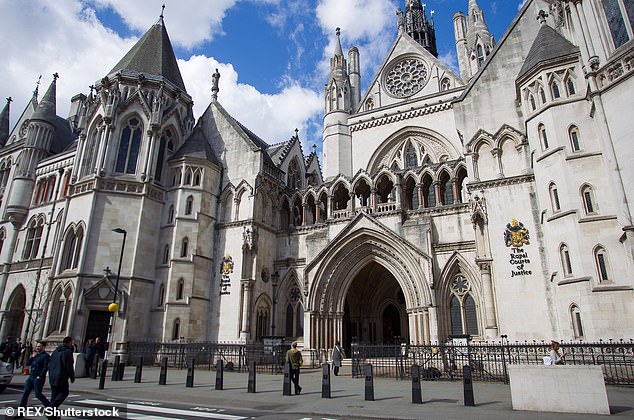 On Monday, the High Court (pictured) heard the pair were shown ‘in a state of considerable distress’ in the episode viewed by 6.7million people between 2017 and 2020

Mr Cochrane said: ‘The broadcast of the programme has caused the claimants immense upset and distress. The claimants’ case is that the programme wrongly revealed matters that were private to them which took place in their home.’

He added: ‘They are both very private individuals and they live in a small community and word soon spread about the programme amongst people they know through work and socially.’

Tim James-Matthews, for the broadcaster, said: ‘It is the defendant’s case that it has at all times believed that this programme forms part of a series of real public interest where each of the stories involves a careful balancing exercise between matters of public interest and the right to respect for privacy.

‘It is prepared to accept, however, that on this occasion in relation to the claimants, it may well have got that balance wrong and for that reason it is prepared to settle their claim and also apologise to them for the distress caused to them by the broadcast of the episode in question.’

Mrs Justice Collins Rice said: ‘I do hope that today’s statement and the other terms of the settlement will assist Mr Wain and Ms Kelly to draw a line under this clearly upsetting episode.’

The judge added that while the broadcaster worked on a case-by-case basis to balance privacy and the public interest, she suggested there is ‘perhaps an opportunity here’ to consider how the balance is struck and stories are approached.

In a statement outside court, Mr Wain said: ‘The ‘Can’t Pay? We’ll Take It Away!’ television programme targets those who are down on their luck and in difficult financial situations.

‘We feel that the programme is best likened to a form of bullying as they pick on those in society who they think are unable to fight back because they do not have the means, whether that be financially or intellectually.

He added: ‘I would urge anyone who has found themselves a victim of this programme to take action.’

Why was John Mulaney in rehab?