A young Swedish rapper who had a number of chart-topping hits in the country was murdered on Thursday night on the streets of Stockholm.

Reports said 19-year-old Einar, whose real name was Nils Kurt Erik Einar Grönberg, was shot in the head and chest in the port of Hammarby Sjöstad.

It comes three months after rival rapper Yasin was jailed for 10 months for masterminding a foiled plot to kindap Einar, who was then tied up and beaten in a flat weeks later in an attack involving another Swedish rapper Haval Khalil.

The kidnappers posted pictures of Einar to social media while he was being held by them, and claimed they sexually assaulted him in an attempt to humiliate him. No one was charged with sexual assault in the case.

Officers were alerted to a shooting at 10:50 pm last night, officials said, but paramedics were unable to save the victim, and he died at the scene. 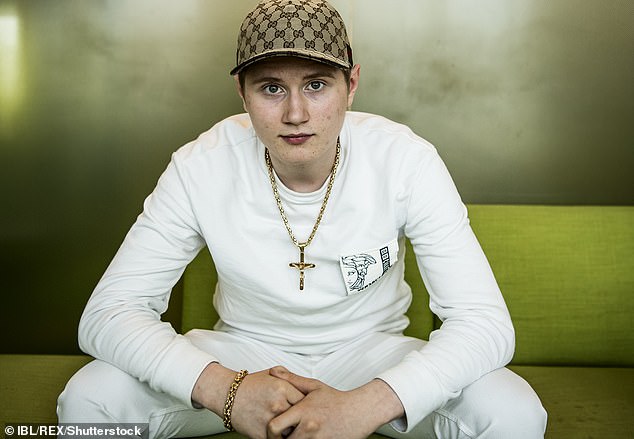 Rapper Einar (pictured, file photo), whose real name was Nils Kurt Erik Einar Grönberg, was shot in the head and chest in the port of Hammarby Sjöstad, according to local reports 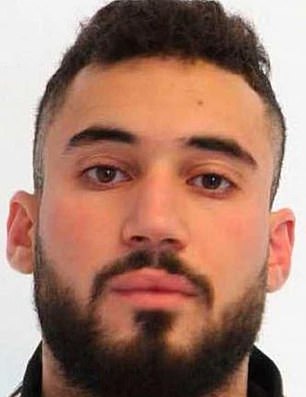 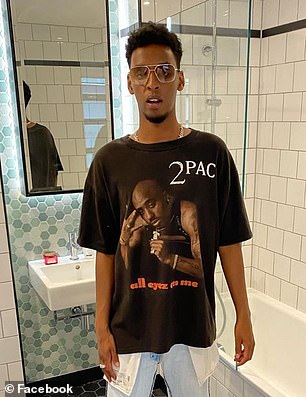 The murder of Einar comes three months after rival rapper Yasin (pictured right) was jailed for 10 months for masterminding a foiled plot to kindap Einar. Among the suspects was another rapper, Haval Khalil (pictured left in a mugshot) who was sentenced in July to two-and-a-half years in prison for complicity in the kidnapping

According to local media, two suspects were seen fleeing the scene, with reports saying Einar was in the company of two other artists when he was murdered.

In line with usual practice, police have not yet confirmed the identity of the victim. But Sweden’s main media outlets all identified him as rapper Einar, whose full name is Nils Kurt Erik Einar Gronberg.

Police have opened a murder investigation. ‘We are actively working to figure out why it happened and who can be behind it,’ Police spokeswoman Towe Hagg said.

Einar had reportedly been living under death threats for a long time and his identity was being protected.

Many of Einar’s songs reference a life of crime, including drugs and weapons. He had public feuds with rival artist Yasin, who in July was jailed for 10 months for his role in a planned kidnapping of Einar in 2020.

The plan was ultimately aborted, but Einar was abducted several weeks later without Yasin’s involvement.

He was beaten, robbed, photographed in humiliating conditions and blackmailed, according to prosecutors. Pictures posted online showed him tied to a radiator and made to wear women’s clothing.

The kidnapping was part of a broader case involving 30 suspects in a criminal network accused of a variety of crimes.

Among the suspects was another rapper, Haval Khalil, who was sentenced in July to two-and-a-half years in prison for complicity in the kidnapping and who has also had public spats with Einar.

The verdict was appealed and the case is currently being heard by the Svea Court of Appeal, which is expected to go on until December.

According to public broadcaster Sveriges Radio, Einar had been summoned to testify in the ongoing trial next week.

Einar had also been called to testify in the original district court trial, but never showed up.

Daily Aftonbladet reported Friday that Einar was living with a ‘price on his head’ after a series of threats against him which had escalated recently.

He himself was one of several suspects arrested for a stabbing at a restaurant in central Stockholm earlier this month.

Thursday’s shooting is suspected to be linked to gang conflicts in the city – an issue that has been growing over the past decade. 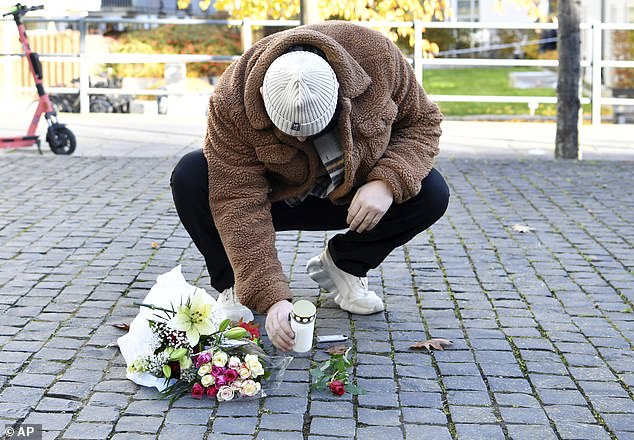 A man places a candle and flower tribute near the site where Swedish rapper Einar was shot to death, in Hammarby Sjostad district in Stockholm, Friday, Oct. 22, 2021 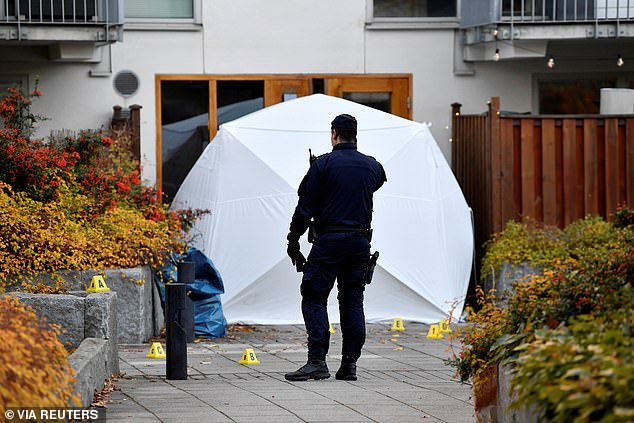 Pictured: Police forensics members work at the site where according to local media Swedish rapper Einar was reportedly shot dead in the street late on Thursday night, in the Hammarby Sjostad district, Stockholm, Sweden October 22, 2021 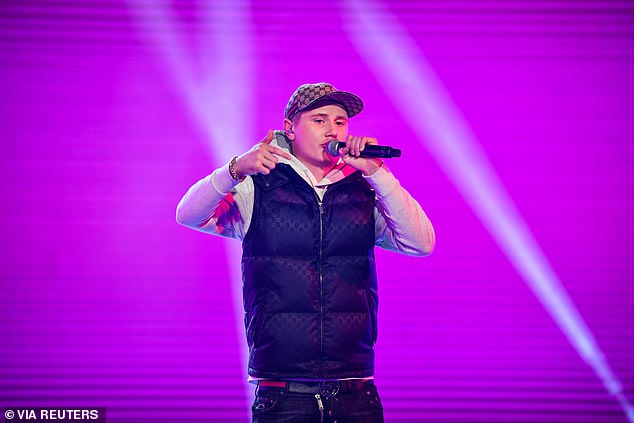 The son of Swedish actress Lena Nilsson, Einar grew up in southern Stockholm and often referred to the criminal scene in the area in his work.

He started his career posting songs to social media, and broke through in 2019 releasing ‘Katten i trakten’ (The cat in the area), which hit number one on Sweden’s singles chart.

Two out of his four albums reached number one in the country’s national record charts. His other two both made it to number two.

He has over a million listeners on the Swedish streaming platform Spotify and has won the Grammis Award, the country’s equivalent of the Grammy Awards.

Police said that his family had been told of Einar’s death.

As of 6:00 am on Friday, no one had been arrested in connection with the murder, police said, with an investigation currently on-going.

Officers had set up a crime scene around the rapper’s home, with pictures from the house showing a forensic tent outside the front door and numbered cones on the ground marking potential evidence.

Carina Skagerlind, a spokeswoman for Stockholm police, said a number of people have been brought in for questioning, but said it was not necessarily because they were suspects, but ‘because they may have things to say’.

‘We continue to secure clues and technical evidence with our forensic technicians,’ he said. ‘Several samples will be sent for analysis and are being analysed right now.’ 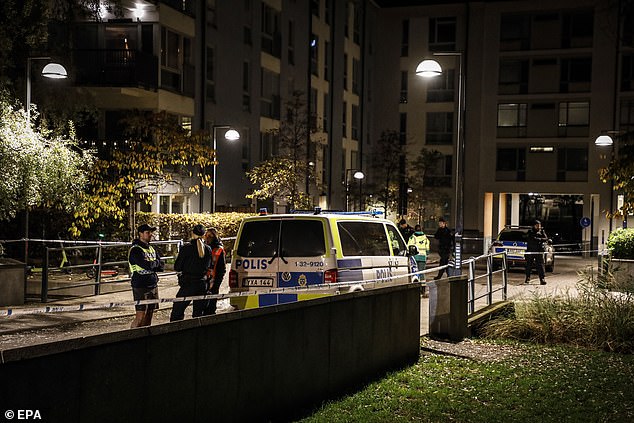 Police is at the site in the Hammarby Sjostad district in Stockholm, Sweden, 21 October 2021, where famous Swedish rap artist Einar was shot dead 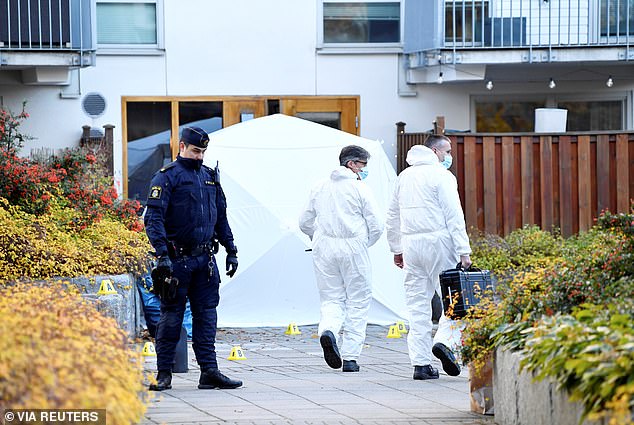 Österling added that forensic investigators had made findings at the crime scene that ‘may provide valuable in the future’, but did not comment on their nature.

He said that investigators were working on the basis that there was more than one person involved in the murder, and that they had received several pieces of information about the suspects.

The spokesman also suggested the murder may have been captured of CCTV.

‘It is a young life that has been lost, and I understand that he meant a lot to many young people. It’s tragic that another life has been lost,’ Prime Minister Stefan Lofven on Friday told news agency TT.

‘It is terrible,’ Minister of the Interior Mikael Damberg said in a written statement Swedish news website Expressen. ‘A young person has been brutally murdered. My thoughts are with the family and all the people who feel great sadness today.

‘Now the police’s murder hunt is in full swing,’ he added.

Minister for Gender Equality and Housing Märta Stenevi wrote on Twitter that ‘violence must be stopped’.

‘Another young man has fallen victim to the deadly violence. Behind every headline is a family that has lost a child. I am thinking today of all those who have lost a relative,’ she said.

Fans and friends expressed their grief on Einar’s social media. 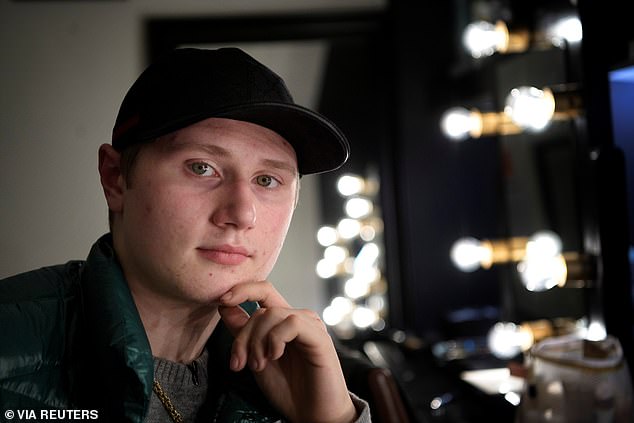 Friday saw an outpouring of grief from friends and fans of rapper Einar (pictured in 2019, file photo) after he was shot and killed in Stockholm on Thursday night

‘Einar was a real brother to me and I will miss him so much. We just released our first record last week and it feels so strange since I spoke to him just a day ago,’ producer Trobi wrote on Instagram.

Sweden has in recent years struggled to rein in rising shootings and bombings – usually settlings of scores by gangs and organised crime involved in drug trafficking.

‘It is a young life that has been lost, and I understand that he meant a lot to many young people. It’s tragic that another life has been lost,’ Prime Minister Stefan Lofven on Friday told news agency TT.

As of October 15, 273 shootings had been recorded with 40 people dead so far in 2021, according to police statistics.