London: Princes William and Harry have paid tribute to Prince Philip ahead of a reunion for the feuding brothers at their grandfather’s funeral this Saturday.

A day after landing in London from California, Harry said the Duke of Edinburgh was the “master of the barbecue, legend of banter, and cheeky right ’til the end”.

He suggested the no-fuss Philip, who died at Windsor Castle on Friday with the Queen by his side, would be saying, beer in hand, “‘Oh do get on with it!’” 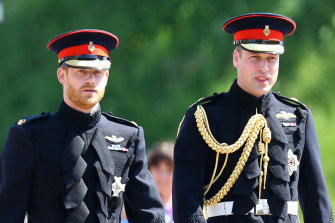 Princes Harry and William – pictured at Harry’s wedding in 2018 – will reunite at the funeral for the first time since the Oprah interview.Credit:Getty Images

Harry’s return will bring him face-to-face with the royal family for the first time since his bombshell interview with Americal talkshow host Oprah Winfrey last month.

His wife Meghan, the Duchess of Sussex – who is pregnant with the couple’s second child – had been advised by her doctor against travelling and remained behind at the pair’s California mansion, potentially defusing a media circus that threatened to overshadow Saturday’s funeral.

“My grandfather was a man of service, honour and great humour,” Harry said in his statement.

“He was authentically himself, with a seriously sharp wit, and could hold the attention of any room due to his charm and also because you never knew what he might say next. 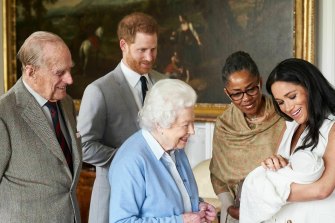 Prince Harry and Meghan, joined by her mother Doria Ragland, introduce Archie to the Queen and Prince Philip in 2019.Credit:AP

“Meghan, Archie, and I (as well as your future great-granddaughter) will always hold a special place for you in our hearts.”

He signed off with the words, ‘Per Mare, Per Terram’ – the motto of the Royal Marines and Latin for ‘By Sea, By Land’.

Harry took over from his grandfather as Captain General of the Royal Marines – the ceremonial head of the force – in 2017 but was stripped of the title when he stepped down from the royal family in 2020.

Philip was being treated in a London hospital for an infection and pre-existing heart condition when the Winfrey interview went to air.

Harry used the interview to talk about his strained relationship with William and said his brother was “trapped” in the monarchy.

Buckingham Palace was also forced to deny Meghan and Harry’s claim that an unnamed member of the royal family expressed concern about how dark their son Archie’s skin might be. The couple later asked Winfrey to tell the public that neither the Queen nor Philip had said the remark.

Harry is quarantining in Frogmore Cottage near Windsor Castle ahead of Saturday’s funeral.

In a separate statement, William said Philip’s century of life was defined by service to Britain, the Commonwealth, the Queen and royal family.

In a remark that might be interpreted as a reference to his dispute with brother Harry, the heir to the throne said: “Catherine [the Duchess of Cambridge] and I will continue to do what he would have wanted and will support the Queen in the years ahead. I will miss my grandpa, but I know he would want us to get on with the job. 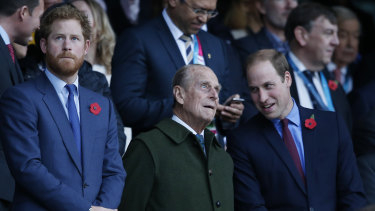 Prince Harry, Prince Philip and Prince William at a rugby match in 2015. Credit:AP

“I feel lucky to have not just had his example to guide me, but his enduring presence well into my own adult life – both through good times and the hardest days.

“I will always be grateful that my wife had so many years to get to know my grandfather and for the kindness he showed her.

“I will never take for granted the special memories my children will always have of their great-grandpa coming to collect them in his carriage and seeing for themselves his infectious sense of adventure as well as his mischievous sense of humour.“

William also released a new image of Prince George sitting next to Philip on a carriage.

Former British Prime Minister Sir John Major, who was appointed a special guardian of William and Harry following Princess Diana’s death in 1997, told the BBC on Sunday that Philip’s funeral presented a unique chance to heal the brotherly rift.

“The friction that we are told has arisen is a friction better ended as speedily as possible,” he said.

“They share grief at the present time because of the death of their grandfather. I think [this] is an ideal opportunity. I hope very much that it is possible to mend any rifts that may exist.”

Cheeky, End, H, right, the, Til
You may also like: