Public school classes in Chicago were canceled Friday for the third straight day as the city and the teachers’ union remained at odds over returning to in-person learning amid the rapid spread of the omicron variant.

The Chicago Teachers Union (CTU) argues that the city has not done enough to ensure that students and teachers can return safely, while the mayor and the city have taken a hard-line stance on getting students back into classrooms, saying schools are one of safest places for them to be.

The standoff has left children and parents stuck in the middle.

"It really is a bit disheartening to see that actual student learning is being pushed to the back burner in the face of whatever else is going on with the district," said Dominicca Washington, whose 6-year-old and 9-year-old attend school in the district.

“We consistently see with CPS (Chicago Public Schools) and CTU, when they have their big arguments, an all or nothing mentality coming from both sides,” said Washington, 33, a former teacher in the school district and the executive director of SHE Chicago, a young women’s empowerment nonprofit. “And it wages these long wars that take away from student learning. In the meantime, while these adults are going back and forth, the kids are idle.”

On Tuesday, the union voted to return to virtual learning as Covid cases spiked in the city and district. In response, the city canceled classes on Wednesday and then the rest of the week.

“What we wanted was to go remote for a week or two until more people can get tested because remember, suddenly there were no rapid tests anywhere and a two-hour wait for a PCR,” said Nora Flanagan, a high school English teacher and mother of two children in the district who supports the union's decision.

“Let’s take a week or two, keep everybody safe, get fewer families sick," she said. "Let’s acknowledge that while omicron is mild in most cases, we are seeing pediatric hospitalizations of vaccinated kids and we are seeing ICU beds fill up again.”

Flanagan said the district was already seeing a sharp rise in cases before the winter break, and then things only got worse. 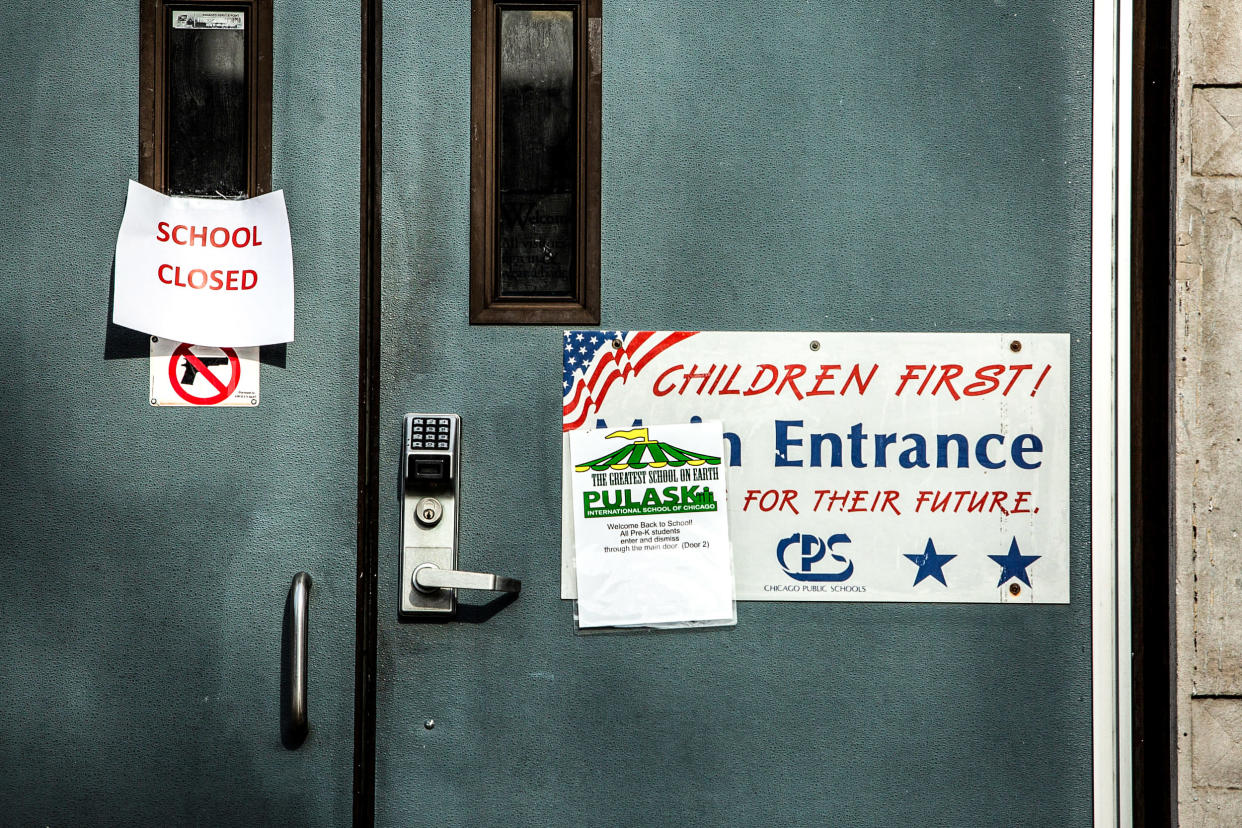 Covid-19 cases and hospitalizations are breaking records across the country because of the omicron surge. On Monday, the U.S. recorded 1 million new Covid cases, according to data compiled by NBC News.

“We came back from the holidays to exactly what a lot of experts were warning about, and that’s when the call became more urgent,” Flanagan said.

She said the union has three priorities, including that a policy be enacted that requires parents to opt out of testing for their children, instead of opting in, as they now do, which teachers say has led to limited participation. The union also wants defined thresholds for when city schools can go remote and the ability to teach virtually until omicron cases decrease.

“I hope we can get back into the building safely with these mitigations in place because I love being in the building,” Flanagan said.

A group of district parents filed a lawsuit late Thursday demanding that teachers return to the classroom and calling the union’s decision to stop in-person learning an “illegal strike.”

Chicago Public Schools did not immediately respond to request for comment.

Earlier in the pandemic, there was a safety agreement between the city school system and the union that allowed schools to go remote for two weeks if the Covid test positivity rate in Chicago increased for seven consecutive days, the rate for each of the seven days was at least 15 percent higher than the rate a week prior and the rate on the seventh day was 10 percent or greater.

Illinois set four daily new case records from Dec. 30 to Thursday, Jan. 6, when more than 44,000 residents testing positive, according to the Illinois Department of Public Health.

Ambria Taylor, a middle school social studies teacher in the district, said what the union is requesting “has already been done by many schools,” including charter schools within the district that are also unionized.

“We’re not asking for anything outlandish that isn’t being done in other places. They’re implementing them and it hasn’t been a crisis,” she said.

The union and teachers have said they are locked out from accessing their CPS accounts and unable to teach remotely.

“I think it’s absolutely disgusting because it’s clearly about maneuvering against the union and what it does is harms kids,” Taylor said. “It’s clearly not about doing what’s best for the kids to just lock us out of school completely. It’s a petty move that harms kids and their families.”

The CEO of Chicago Public Schools, Pedro Martinez, said in a statement to The Associated Press late Thursday that "our schools are the best, safest place for students to be during this pandemic, and we are working tirelessly to get everyone back in class every day.”

“We will continue working with CTU to resolve this situation and will provide you with ongoing updates as the week continues,” he said.

Chicago Mayor Lori Lightfoot said on MSNBC on Friday that the union’s actions were a “unilateral, illegal strike” that could have a “catastrophic, cascading effect on our parents and families.”

“There are huge consequences for even a one day disruption, let alone a multiday, and unfortunately, it doesn’t feel like the union understands that,” she said.

Lightfoot said she hoped a deal would be struck in the next day or so that would cover the remainder of the school year.

“We’re going to have some short-term pain, but I hope that the short-term pain gives us long-term gain, and that we will not have any further disruptions for the rest of the school year,” she said.

While the deadlock persists, parents are left trying to figure out how to negotiate the abrupt shutdown.

As a single mother to a 5-year-old and 4-year-old who attend school in the district, Jamica Hollinness said it is difficult for her to explain to her employers that she needs to stay home to work and could not find a babysitter.

She said she feels neither the union nor the district gave parents enough time to deal with a decision that greatly affects families like hers. Currently, her children do not have internet nor the devices necessary for remote learning at home.

However, Holliness said she was “100 percent with the union, safety-wise.”

She said she wants to see additional safety measures including expanded testing and make sure families like hers have the ability to learn at home.

Likewise, Nereida Gutierrez-Rozycki, a mother whose children are 16, 11 and 5, said she was “all for remote learning” right now because the Covid rates in Chicago were “super high.”

She said she didn’t feel the district had done enough to keep kids safe and prevent outbreaks after the break.

“It’s scary and I feel bad for all these teachers that have to be there. I don’t understand why we can’t do remote learning,” she said.

She said she was upset teachers had been locked out of their accounts. All of her children were sent home with Google Chromebooks before the break and would have been prepared to go remote, she said.

Gutierrez-Rozycki, 37, had tested positive for Covid and did not send her children into school this week because they had been exposed.

“I wanted to protect the other kids and the teachers, of course,” she said.