Thousands of early learning educators have packed Melbourne’s Federation Square to call for better pay and better conditions, as the childcare sector struggles to cope with nationwide staff shortages.

More than 1000 childcare centres temporarily shut down across the country on Wednesday. About 20,000 families in Victoria were affected and 70,000 nationwide.

United Workers Union early education director Helen Gibbons said the Melbourne protest was one of 16 across the country. She said the action was focused on long day care, which was federally funded.

Gibbons said early educators worked through the pandemic and felt “exhausted, undervalued and taken for granted by the previous [federal] government”. She said centres were turning away children because they didn’t have enough staff and most educators said the shortages were affecting the quality of care and education.

A union survey taken in July 2021 of 4000 current and former early educators found that 37 per cent of respondents said they wanted to leave the profession within 12 months. Gibbons said “they delivered on what they said”. 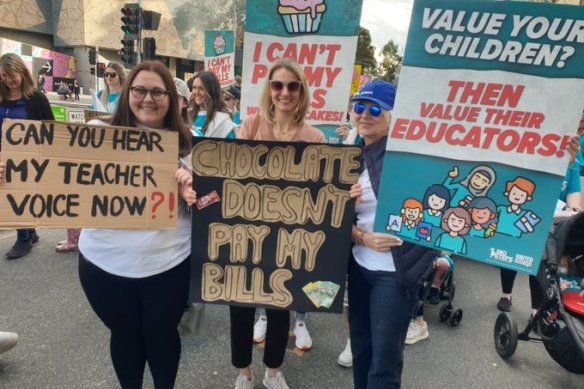 Childcare and early education workers protested around the country today for better wages and conditions.Credit:Nicole Precel

“We are back out and won’t back down until we get the chance we need. I think the community is listening,” she said.

She said the union would “keep the pressure on for some change”.

Bron Jefferson, who works at Queensberry Children’s Centre in Carlton, has been in the sector for 35 years.

“I call the early childhood educators the forgotten workforce because we are,” she said. “We do a fantastic job. We enable all the mums and dads out there to participate in the workforce or paid upskilling, but we are right at the bottom of the food chain.

“Pay and conditions in the general [childcare] sector are horrifying. I’ve been around the traps for a long time now and have never seen a staffing crisis like this – you can’t get quality staff either.”

Jefferson called the current state of childcare “a mess”.

As of July 1, 6.2 per cent of Victorian centres were operating with less than their required staff, according to the Australian Children’s Education & Care Quality Authority.

Julie Price, executive director of the Community Child Care Association said their members negotiated with families or closed for the afternoon if the majority of staff wanted to attend the rally.

“We would like to see early childhood education valued as part of the education system because it is just as important as schools,” she said.

Price said she’d like to see a reform of the funding system so that it responded to community needs and quality indicators such as qualifications of staff and ratios of staff to children, “rather than the current system that is directly tied to fees families pay”.

Victoria expects to have to expand its early education workforce by more than 10,000 in the next decade to meet requirements for the state’s $9 billion expansion of kindergarten for all three and four-year-olds.

“What we have already is families turned away, hours being capped, services are closing rooms, some services are shutting down one day a week because they can’t get the staff.”

The government has promised a $5.4 billion overhaul of early childhood education, including a lifting of subsidies for lower-income families and a Productivity Commission review of the sector to create a universal fee subsidy of 90 per cent.