Children's magician is fined £400 after putting rubbish in council bin

A children’s entertainer was fined £400 for ‘fly-tipping’ after clearing rubbish strewn on the street by foxes and putting it in a council bin.

Olivia Post, from Battle, East Sussex, said she picked up the waste from bin bags that had been ripped open by foxes near her home.

But the private company issuing the penalty told her council bins were for street litter, not for controlled domestic waste.

Ms Post said she took a rubbish bag out of a bin in her flat, before collecting the waste from the street and putting it in the council bin. 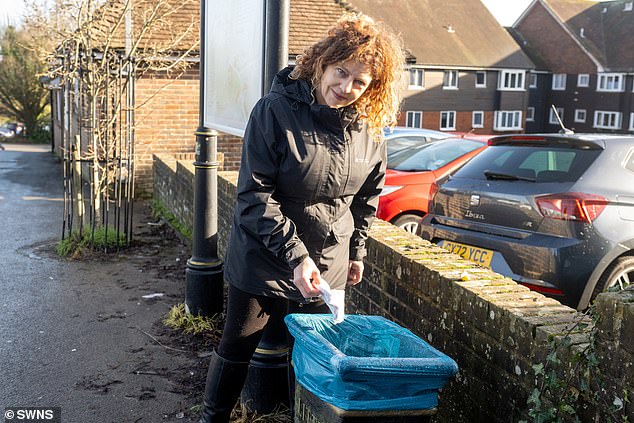 Olivia Post, from Battle, East Sussex, said she picked up the waste from bin bags that had been ripped open by foxes near her home before putting it in this council bin

It emerged that animals had again pulled the rubbish out and council snoops had gone through it, finding her address in some of her rubbish that was already in the bag.

Ms Post said: ‘We’re in this constant scenario of having litter and rubbish from all over the place being strewn across the car park.

‘During the snow it was particularly bad because nobody came to empty the bins, there was even more litter strewn around than usual.

‘So I went and picked the litter up, took the rubbish bag out of my kitchen, which obviously had some of my waste in.’

Describing what happened the next day, she said: ‘I get a knock on my door from this officer who managed to get up the icy pathway, which was quite astonishing to be honest, because we had no water, no shops open, we were literally cut off.

‘I was astonished because the one service we got was somebody issuing fines. He asked me, ”Do you recognise this bag?” Of course I said ”yes” and he said ”I’m giving you this fine” and cautioned me – it’s very intimidating.

‘He had his camera on and, just like the police, he read me my rights. I was flabbergasted. I said ”this isn’t even my rubbish apart from the stuff at the bottom”. 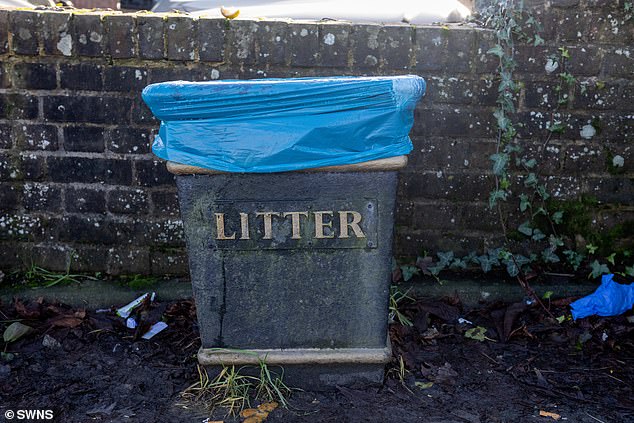 Tthe private company issuing the penalty told her council bins were for street litter, not for controlled domestic waste

Two other women in the same block have also been accused of fly-tipping, including Ms Post’s 83-year-old neighbour Anne Lazzara.

The pensioner – who has been in and out of hospital with pneumonia – received her fine when her grandson took the bins out too early on collection day.

He was later told tenants should take their bins out at 6am.

Ms Lazzara said she’d ‘rather go to prison’ than pay the fine, which was issued on December 12, and the council eventually rescinded it. 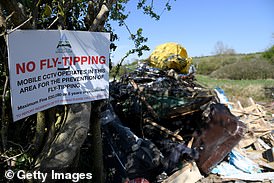 However, Ms Truett was accused of ‘littering’ but reportedly not given any evidence of the alleged offence.

She has no idea what the fine is regarding, but the tenants expect it will either be for putting her rubbish out for collection or putting litter in the bin.

The midwife has since received a letter stating she will be taken to court.

Meanwhile, when Ms Post tried to appeal Rother District Council’s fine on the website of National Enforcement Solution’s website (NES) – a private company outsourced by the council – she found tucked away in an FAQ section that no one can appeal.

The website discreetly states: ‘There are no formal grounds of appeal against a Fixed Penalty Notice.

‘This is because a Fixed Penalty Notice is an invitation for you to effectively ”buy off” your liability to prosecution.’

Ms Post was told over email that her only recourse was taking NES to court.

She added: ‘It’s just completely behind closed doors that they review your case and tell you you are still guilty.

‘I’m really unhappy about flytipping and you can see that by virtue of the fact I am out there cleaning up. I can’t believe it.’

In a ”gesture of goodwill” the council said she could have an extension on when the bill was due, but that that would be their final response.

‘It now says it will reimburse the full amount. 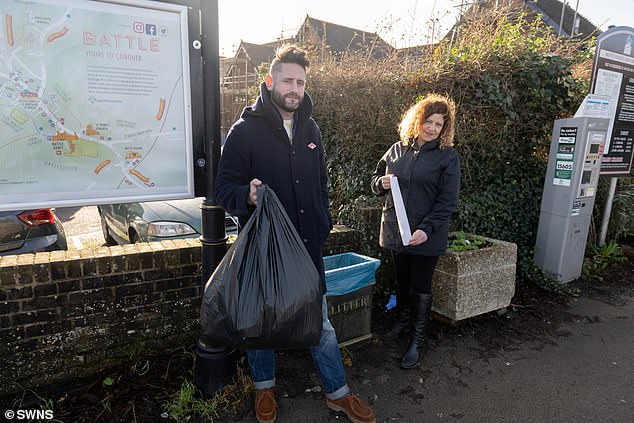 Ms Post with Dave Clarke, one of her neighbours who have also been fined by a company contracted by the council

A Rother District Council spokesperson said: ‘Enforcement began in the summer to tackle the growing issue of fly-tipping and littering, which is a real blight on our district.

‘Enforcement officers can only deal with the situation they come across.

‘In this case, rubbish was found on the ground that contained Olivia Post’s name and address, suggesting that the resident had failed to dispose of her waste properly, and she was given an on-the-spot fine.

‘We appreciate that there are sometimes circumstances that we are not aware of and, having heard from Ms Post, we will reimburse her for the cost of the penalty notice as a gesture of goodwill.’