The US spokesman said the Peoples’ Republic of China appeared to be deviating from decades of policy based around “minimal deterrence”. They also described China’s nuclear build-up as “concerning”. 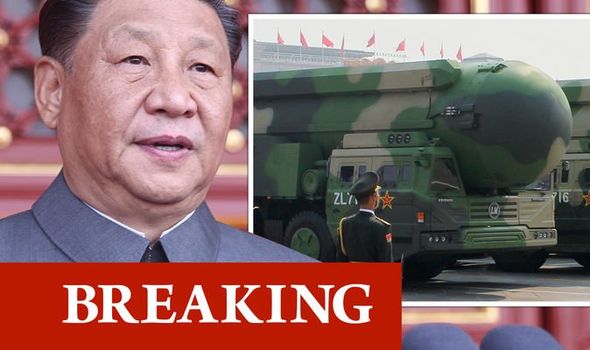 The spokesman further encouraged China to engage with the US to minimise the risk of a destabilising arms race.

The US was aware of Mr Jinping’s remarks earlier today, he added.

In an hour-long address from Tiananmen Square, Xi pledged to build up China’s military, committed to the “reunification” of Taiwan and said social stability would be ensured in Hong Kong while protecting China’s security and sovereignty.

He said: “The people of China are not only good at destroying the old world, they have also created a new world. Only socialism can save China.

“Anyone who dares try to do that will have their heads bashed bloody against the Great Wall of steel forged by over 1.4 billion Chinese people.”

Xi and the party are riding high as China recovers briskly from the COVID-19 outbreak and takes a more assertive stance on the global stage.

However, Beijing faces external criticism over its clampdown in Hong Kong and treatment of ethnic minorities in Xinjiang, and is dealing with a worsening demographic outlook that imperils long-term economic growth.

A survey of 17 advanced economies released on Wednesday by the US-based Pew Research Center showed that views about China have remained broadly negative and confidence in Xi neared historic lows.

On Thursday, Xi said that the people of China would never allow any foreign force to bully, oppress, or subjugate them.