Beijing’s decision to suspend a high-level economic dialogue with Australia has no practical effect. But it conveys important information nonetheless.

It has no practical effect because it’s like getting the news that your big trip to Bali scheduled for next month has been cancelled. 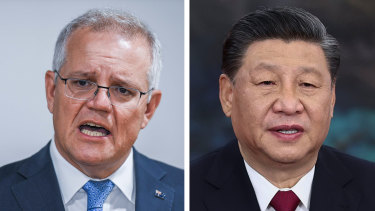 Neither Australia’s Prime Minister Scott Morrison nor China’s President Xi Jinping are in a mood to back down.Credit:Joe Armao/AP

You’ve known that for quite a while already. The border is shut. No one is going anywhere. The new email in your inbox is just a formality.

Likewise, President Xi Jinping imposed a total ban on any visits with Australia’s prime minister – and other ministers – more than three years ago.

So the announcement that he’s now suspending the China-Australia Strategic Economic Dialogue is a formality. An Australian cabinet minister shrugged off the news on Thursday afternoon as meaningless; his Chinese counterpart hasn’t even been answering the phone or mail for over a year.

Routine dealings between Australian and Chinese diplomats continue. But the development carries three pieces of information. First, it represents another downward curve of the spiral in a continuing downgrading of relations.

So it confirms the new reality of a settled pattern of political deterioration. This is the reverse of the quarter-century cycle of continuous improvement that had dominated Australia-China relations. The last time Beijing imposed a freeze on ministerial visits was in 1996 when the Howard government criticised Beijing’s treatment of Taiwan. Once that rift was healed, the upward cycle of political relations took hold.

Now, each time Canberra moves to protect Australia from China’s covert or overt influence, Beijing responds with a clear sign of displeasure. Canberra cancels Victoria’s Belt and Road agreements with China, so Beijing cancels the economic dialogue with Canberra.

This downward cycle is now over three years old and is showing no sign of ending.

Second, it suggests that Xi has reached the end of his current list of punitive trade sanctions against Australia. The current list is in place against beef, lamb, wine, timber, barley, lobster, cotton and thermal coal. Beijing has issued a travel warning to deter China’s students and tourists from Australia too, but with the border shut the impact is not obvious.

This latest measure imposes no further attempt at punishment through trade sanctions.

Third, the announcement blamed Australia’s “attitude”. The “attitude” of the Morrison government towards Xi’s regime is not about to become sunnier.

While Canberra continues to ask for a resumption of political dialogue, it is not about to reverse any of the measures it has taken.

Morrison is in no mood to back down; neither is Xi. The spiral remains downward. The political dialogue between the two governments is the dialogue of the deaf.

a, Chinas, for, Latest, mere, move
You may also like: