Judges must now consult the AI on every case by law, Beijing’s Supreme Court said in an update on the system published this week, and if they go against its recommendation they must submit a written explanation for why.

The AI has also been connected to police databases and China’s Orwellian social credit system, handing it the power to punish people – for example by automatically putting a thief’s property up for sale online.

Beijing has hailed the new technology for making ‘a significant contribution to the judicial advancement of human civilisation’ – while critics say it risks creating a world in which man is ruled by machine. 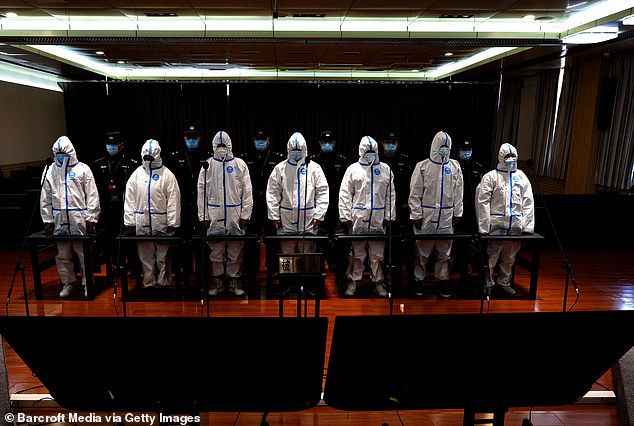 China has plugged artificial intelligence into its ‘smart court’ system – allowing it to make rulings, draft laws, and charge people with crimes (pictured, a Chinese court during Covid)

China has been developing a ‘smart court’ system since at least 2016, when Chief Justice Qiang Zhou called for technology to be used to improve the ‘fairness, efficiency, and credibility’ of the judicial system.

That has meant introducing robot receptionists to courthouses to offer online legal help, automatic voice recognition recorders in courtrooms that has eliminated the need for transcribing, and ‘virtual courtrooms’ where cases can be heard online.

China has even introduced a highly specialised ‘internet court’ that deals solely with cases related to the virtual world – such as online loans, domain name disputes, and copyright issues.

It has led to the creation of huge databases where information on all cases – almost 100,000 per day – are uploaded.

Artificial intelligence has now been plugged into those databases with the aim of learning from those cases and then spitting out judgements and recommendations for new laws based on what it finds. 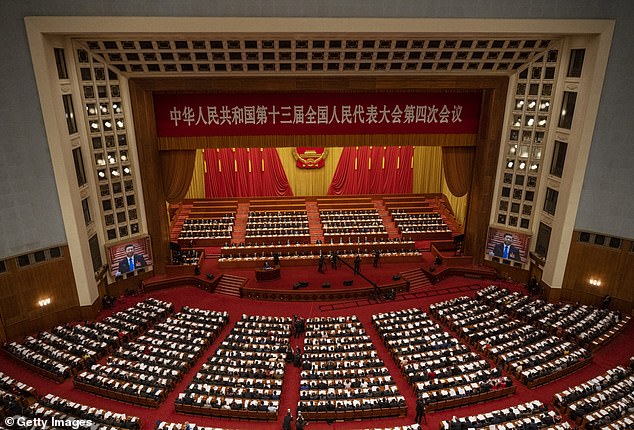 Beijing says the system will make justice fairer and quicker, but critics say it risks creating a world in which man is ruled by machine (file image)

Instead of merely collecting data, it means the AI is now making decisions on behalf of judges who must justify themselves if they want to overrule it.

An AI prosecutor has even started charging people in Shanghai with crimes it believes they have committed, the South China Morning Post reports.

And linking the AI up with China’s social credit system means it can punish people who refuse to comply with judgements – such as blocking a person refusing to pay a fine from purchasing plane or train tickets.

Zhang Linghan, professor of law at the China University of Political Science and Law, warned the rapid rise of AI risks creating a world where man is ruled by machines.

‘Humans will gradually lose free will with an increasing dependency on technology,’ she argued in a paper recently published online.

‘We must be alert to the erosion of judicial power by technology companies and capital,’ she added.