Chinese tennis star, 35, vanishes after she was censored from the internet for accusing country’s former vice premier, 75, of sexual abuse

A Chinese tennis player has vanished a week after accusing the country’s former vice premier of sexual abuse.

Peng Shuai, 35, accused 75-year-old Zhang Gaoli of forcing her to have sex with him in a lengthy post uploaded to Weibo, the Chinese Facebook equivalent.

The post was soon deleted and all of her recent content on the site has been scrubbed. The word tennis (‘wangqiu’) was even censored on the social network.

The athlete, who became a household name after winning the French Open doubles in 2014, has not been seen since.

While China has been rocked by #MeToo scandals before, this is believed to be the first involving a high-ranking member of the Communist Party. 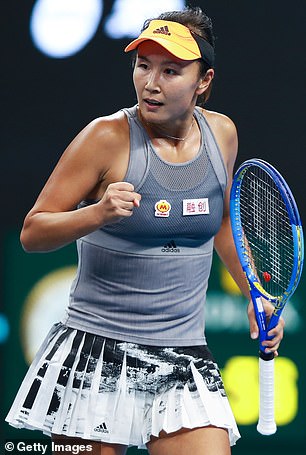 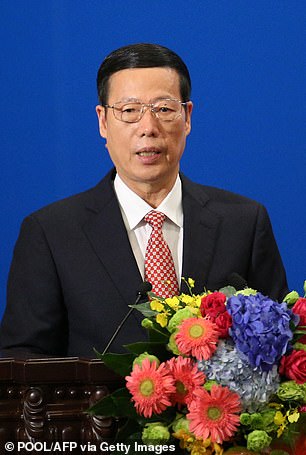 Peng Shuai, 35, (left, at a tennis tournament in Beijing in 2019) accused 75-year-old Zhang Gaoli (right, making a speech in Beijing in 2016)  of forcing her to have sex with him in a lengthy post uploaded to Weibo, the Chinese Facebook equivalent.

Peng Shuai, 35, a Chinese tennis star, has accused a high-ranking Communist Party official of sexually assaulting her on her Weibo profile

During a press conference on November 3, a spokesman for Beijing’s foreign ministry refused to be drawn on the subject, saying flatly: ‘I have not heard of it and it is not a diplomatic question.’

Zhang was a vice-premier in Beijing and served on the ruling party’s powerful seven-member standing committee of the Politburo.

In the post, Peng revealed that she and Zhang – who is married – have been involved in an on-off affair dating back to 2011 when the pair met in the port city of Tianjin.

The post details how Peng slept with Zhang once that year, and possibly a second time before he was promoted to the bureau and cut all ties with her.

Peng claimed to have been involved in a ten-year affair with Zhang Gaoli (pictured), saying he sexually assaulted her in 2018

But he allegedly rekindled the affair in 2018 after his retirement from politics, by inviting Peng for dinner with his wife after which he pressured her into sex.

That kicked off a three-year affair, Peng alleged, which she described as ‘unpleasant’.

In the post, she admits to having ‘no evidence’ that the affair ever took place because Zhang insisted on keeping it a total secret.

It is also not clear why she choose to reveal the affair now, though her post concluded: ‘You’ve said you are not afraid.

‘But even as an egg hurled at a rock, a moth to a flame for self-destruction, I will speak the truth with you.’

The post was taken down within 20 minutes of being uploaded to Weibo, which is heavily monitored by the Chinese state.

For a time Peng’s profile appeared to be disabled, and was not showing up in searches on the site.

MailOnline has found the profile is still active and shows up on a Google search, but the post is missing and comments on all of Peng’s other posts are disabled.

Trying to post about Peng or Zhang on Weibo also throws up an error, even when the posts themselves do not mention the alleged affair.

China’s foreign ministry has denied all knowledge of the matter and Zhang has also not responded to requests for comment.

Lv Pin, a Chinese activist for women’s rights, tweeted shortly after the post was revealed: ‘They [the CCP] have always been rotten and decadent.

They’ve always been exploiting women, but it’s only that it’s been done behind black curtains.

‘Her revelation is very important, for it lets people get a glimpse of the real life of China’s highest leaders, their excessive abuse of power, corruption and their fear behind a moral façade wrapped in power.’

'vanishes', a, Chinese, star, tennis
You may also like: