As the Queen’s grocer, Fortnum & Mason has long been assumed to be a byword for both quality and luxury.

But the verdict on one of its products has left a nasty taste in the mouth, it seems.

Experts at Which? found the chocolate in a £22 Advent calendar was inedible. 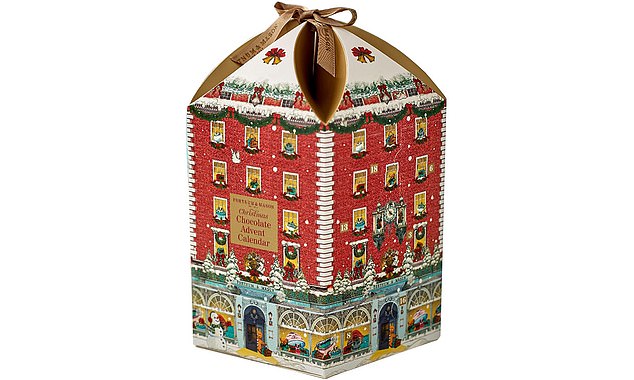 The consumer group said: ‘Fortnum & Mason’s Piccadilly Chocolate Advent Calendar is designed to look like the grocer’s iconic central London flagship store and is described on the company’s website as ‘a daily decadence for the most discerning of chocolate lovers’.

‘But it was the worst calendar tested, with every single person on our five-person panel spitting out the chocolate due to a “chemical taste” which made it inedible.’

The taste test panel looked at the chocolate treats available from nine top-selling Advent calendars, ranging in price from £9.99 to £68.

As Advent calendars are now a way for the big brands to market everything from Marvel superheroes to cheese, Which? also assessed five gin-themed products and nine items that are designed for children.

Eight of the 23 tested were awarded an Editor’s Choice accolade, led by the Hotel Chocolat Grand Advent Calendar (£68), which received high praise for its looks, variety and quality.

Butlers Advent Calendar (£18) did not have the same variety of gifts yet was still rated highly, as was another in the sweets category, the Love Cocoa by James Cadbury Luxury Chocolate Truffle Charity Advent Calendar (£25).

The latter has decorations featuring, among others, Captain Tom Moore, Joe Wicks and James Bond, with proceeds from sales going to the NHS.

Editor’s Choice ratings went to the Drinks by the Dram Premium Gin Advent Calendar (£84.95) – praised for using products from around the world and small niche distilleries – and the That Boutique-y Gin Company Advent Calendar (£49.95).

As with the Fortnum’s calendar, the two products were considered by the experts to be poor in quality and/or value.

Fortnum & Mason did not respond to requests for a comment yesterday.