Christian policeman faces disciplinary action after posting ‘there are 2’ genders

A veteran police officer faces further disciplinary action over online posts that appear to mock a colleague promoting gender equality in the force, while also taking a swipe at reporting by the ABC about teachers who supported non-binary and gay students.

Sergeant Bruno Staffieri is already in hot water over his alleged criticism of Victoria Police’s campaign to promote workplace equality for LGBTQI members, but is now the subject of a fresh investigation by the force’s internal watchdog. 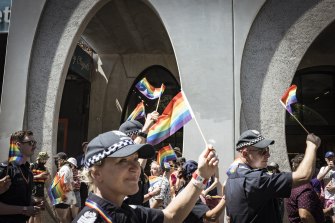 Staffieri, who regularly expresses his Christian faith online, has become a polarising figure in the force while also receiving support from several internet forums over his opposition to police support of LGBTQI causes.

The police investigation of Staffieri’s alleged misconduct shapes as a test case for freedom of speech and the force’s recently revised social-media policy, particularly for officers expressing religious or political opinions online.

The 62-year-old was interviewed by officers from Professional Standards Command on April 26 over a post he made to senior project officer Bonnie Loft, who works with Gender Equality and Inclusion Command.

“So you are doing tertiary education studying genders. I’ll make it easy for you to pass….there are 2,” Staffieri said in a post from November last year.

He was also questioned about a Facebook post he made on March 17 regarding an ABC report on a teacher who founded a gay pride group for students at a Western Sydney school.

“What a disgrace. Bad enough having gay, non-binary teachers, but to have them push their filth on students is a disgraceful crime. Why can’t we sack these teachers?” Staffieri posted.

Staffieri, who has been an officer for more than 35 years and is close to retirement, could lose his job or face other penalties because of the online comments.

In February, The Age revealed that other posts by Staffieri had infuriated Deputy Commissioner Neil Paterson, the state’s second-highest ranking officer. Staffieri was charged with a disciplinary breach in December last year over the online comments.

On June 21 last year, Paterson posted on Yammer, the force’s internal communication platform, that “Victoria Police is proud to have been recognised as a silver employer at the 2021 Australian LGBTQ+ inclusion awards.”

Staffieri responded on June 23 by posting: “Yes I agree. Great achievement. But if the public knew how much time, effort and taxpayer dollars went into this, they would also be demanding why we didn’t get a gold.”

Paterson defended the campaign and denied it had received significant public funding.

Paterson fired a broadside back at Staffieri.

“I don’t respect or value your views as they are offensive and there is no place for those views in Victoria Police…. Either limit your comments on Yammer to comments that are respectful of everyone or consider your employment options,” Paterson posted.

Staffieri was also investigated over his public criticism of the government’s decision to cancel Australia Day and Anzac Day celebrations last year, but allow the Gay Pride March in St Kilda to proceed.

“So the next time Australians are sent out to fight a war, maybe we can send out the 8000 that marched today….and try to stop the enemy by waving feathers and brightly coloured boas at them,” Staffieri posted on May 17, 2021.

Lawyer Lee Flanagan from Arnold Thomas and Becker said Staffieri’s legal position was unclear if he were to be sanctioned by Victoria Police.

“There’s two competing arguments at play. Victoria Police will have policies and procedures in place that its officers presumably agree to abide by. But he [Staffieri] is also entitled to express his opinions providing he does it in a respectful and reasonable manner,” Flanagan said.