The Church of England is planning a symbolic service to apologise for the medieval expulsion of Jews 800 years ago.

Anglican leaders announced the plans at a meeting of the General Synod – the legislative body for the Church of England – in a bid to address the recent and ‘rapidly worsening anti-Semitism in the UK’.

Although the Church of England was not created until after the Reformation, leaders are planning a ‘symbolic repentance’ to sever ties with the historical role the English church played in fuelling anti-Semitism in the past.

The act of repentance will take place next year on the 800th anniversary of the church’s Synod of Oxford in 1222 which saw the introduction of several anti-Semitic laws in England. 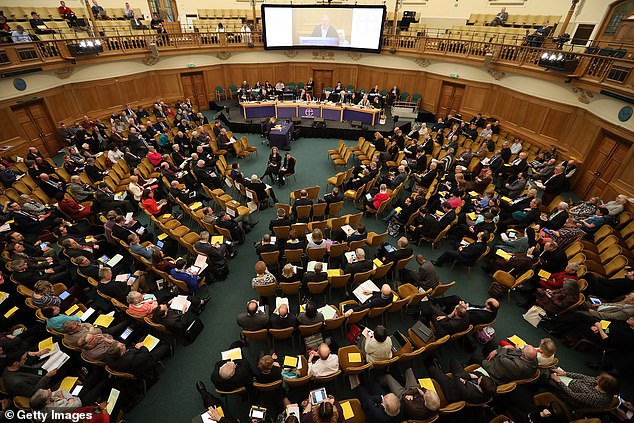 At a meeting of the General Synod, the Church of England announced plans to hold a service to apologise for the historic role played in the expulsion of Jews 800 years ago (file picture)

In 1290, the entire Jewish population of England (about 3,000 people) was expelled from the country on the orders of Edward I.

The decision was partly the result of decades of increasing hostility sparked by changing attitudes of the Church.

Jews had only been in England since the Norman Conquest and were initially under special protection of the King.

But by the middle of the twelfth century, there was increasing antisemitism in England.

In part, this was fuelled by something called the ‘blood libel’ – false allegations that Jews abducted and murdered Christian children for magical rituals.

The official stance of the Church slowly shifted from tolerance of Jews to increasing hostility which influenced the views of ordinary people.

Anti-Jewish feeling was also linked to the crusades, which began in 1096. Christians trying to reclaim the holy land increasingly saw Jews as ‘Christ-killers’, against whom violence could legitimately be used.

In 1222, the Synod of Oxford was held which saw church leaders implement decrees that forced Jews to wear clothing to distinguish them from Christians.

By the late 1200s, several laws had been passed that restricted the rights of Jewish people, culminating in the expulsion of all Jews from England in 1290.

Jews did not return to England until the 1650s, when they were invited to resettle by Oliver Cromwell.

The laws included requiring Jews to wear badges, banning them from building synagogues and banning them from working in certain professions and were considered a catalyst to the eventual expulsion of Jews in 1290.

Addressing what plans the Church had to make amends for this role played, the Bishop of Lichfield said a symbolic service had been proposed.

The Rt Rev Dr Michael Ipgrave said: ‘The Archbishop’s office has indeed received a letter proposing a service that might offer an act of repentance at the 800th anniversary of the Synod of Oxford and its anti-Semitic laws.

‘We are exploring the idea of such a service to be planned in conjunction with the Council of Christians and Jews, as well as the potential for a liturgical resource that might be offered to local churches to model an appropriate symbolic repentance.’

The issue was raised by Jacob Vince, a member of General Synod from the Diocese of Chichester who raised the issue of the rise in anti-Semitism in the UK.

Last month, it was revealed the Community Security Trust (CST) recorded 351 anti-Semitic incidents between May 8 and 31, already surpassing the highest total for any single month since records began.

The spike has been linked to the escalation of violence in Israel and Gaza.

The CST said the rise was fuelled by anti-Semitic reactions to the conflict and called it ‘utterly predictable and completely disgraceful’.

There are concerns the situation will only worsen as violence in the Middle East continues.

The Campaign Against Antisemitism cited physical beatings and vandalism, chants and placards at rallies, social media abuse and threats to Jewish children at schools and universities as examples of the hostility faced by the community.

‘None of these should be features of life in Britain in 2021, but they are for Jewish people,’ a spokesperson said.

Mr Vince asked the General Synod: ‘In light of rapidly worsening anti-Semitism in the UK in recent months, might the 800th anniversary next year be an opportune moment for the Church of England to consider making a formal break with these historic prejudices as a gesture of solidarity with our Jewish neighbours, England’s oldest ethnic minority?

‘Has the Archbishop’s office received a letter and research paper on the topic of this octocentenary, and are there any plans to appoint suitable individuals to investigate these matters further with a view to conducting a fitting service of corporate repentance?’

This would mark the first time the church has apologised for the expulsion of Jews.

Dave Rich, director of policy at the Community Security Trust, which monitors antisemitic incidents, said the repentance was ‘better late than never’. 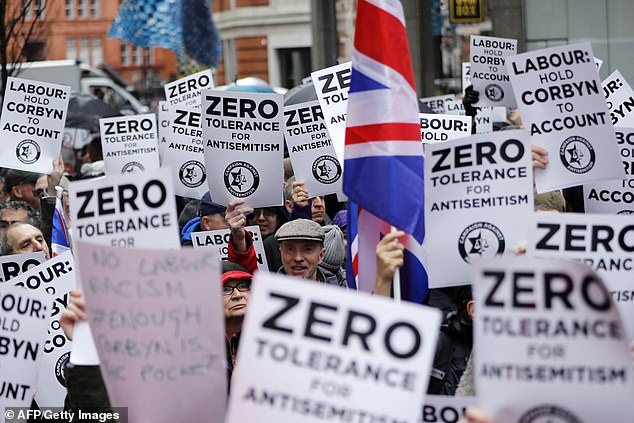 Anti-Semitic incidents are at record levels and have been linked to conflict in Israel and Gaza. Pictured: People gather for a demo organised by Campaign Against Anti-Semitism in 2018

‘There is a long history of medieval anti-Judaism and antisemitism in this country that is largely unknown but is very important and still leaves a legacy today.

‘It is always welcome that the church should recognise this. The most important part is the sense of solidarity it will give to the Jewish community at a time when antisemitism is rising.’

Earlier this year, the Archbishop of Canterbury tweeted his condemnation of anti-Semitism following an outbreak of incidents spurred by the escalation of the conflict between Palestine and Israel.

Justin Welby said: ‘There can be no excuse for the appalling anti-Semitism we have seen in the UK.

‘Such hatred here will not help bring the long overdue peace with justice in Israel and Palestine.

‘As we continue to pray for the Holy Land we must reject violence, the threat of violence and anti-Semitism.’

apologi, Church, England, of, will
You may also like: