Follow
Home » World News » Cliff-side villa with bathroom in a CAVE goes on sale for £1.5million

A rock solid investment! Stunning cliff-side villa with bathroom in a CAVE once used by smugglers and as WWII air-raid shelter goes on sale for £1.5million

A 19th century cliff-side house with stunning sea views is up for sale and it comes complete with a bathroom inside a cave network used as a bomb shelter during the Second World War.

The Grade-II listed West Hill Villa, situated in Hastings, East Sussex, was built out of brick into the sandstone bedrock of the West Hill, overlooking stunning views of the shoreline.

The property has gone on the market for £1.5million and has a unique history, with links to St Clements Caves visited by royals including Princess Diana. 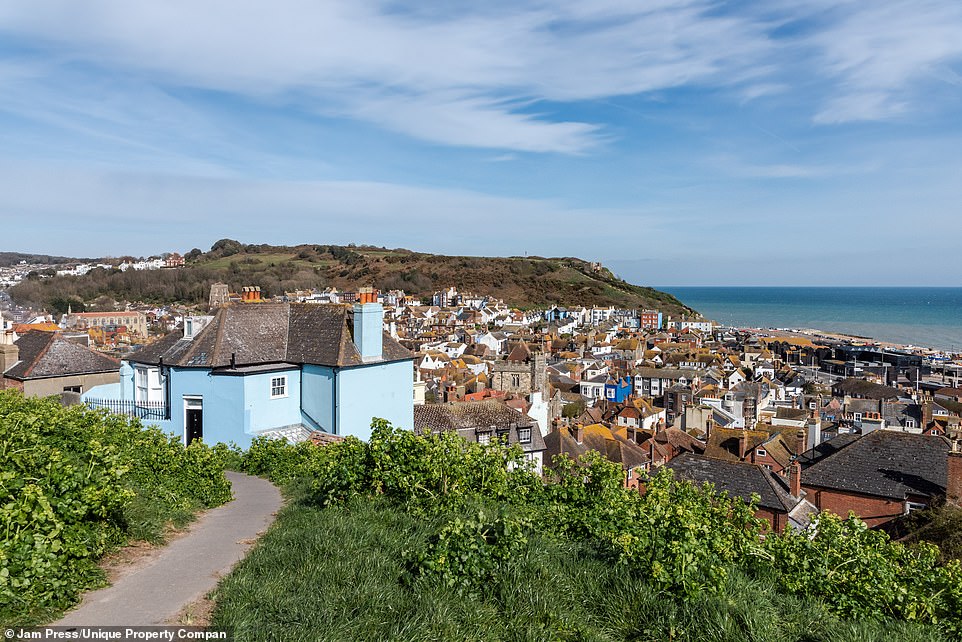 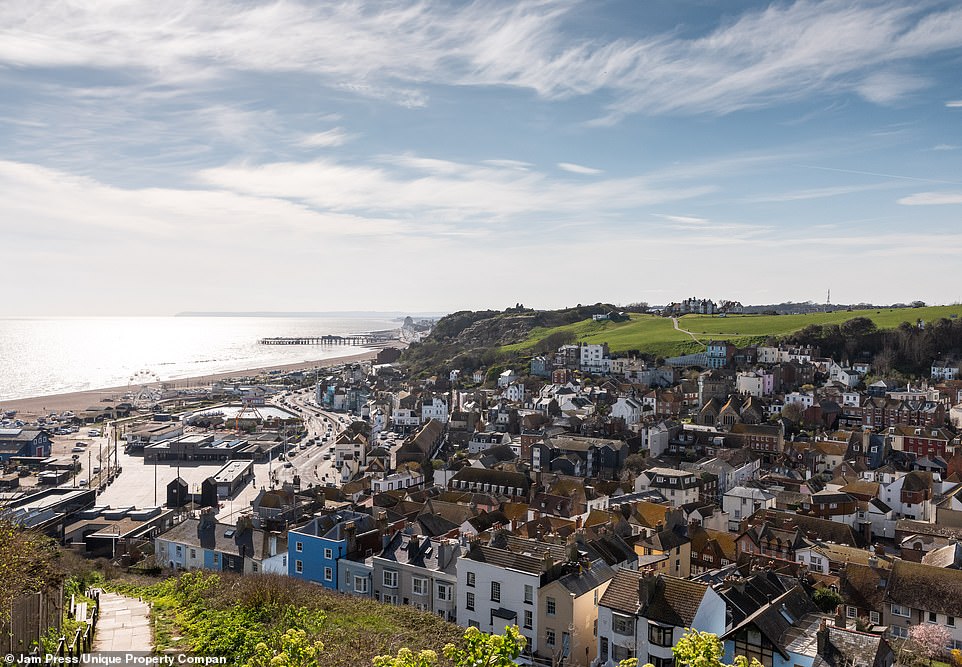 The unique home, in blue at the rear of the picture, is built into the cliffside and has links to the cave network used during the Second World War 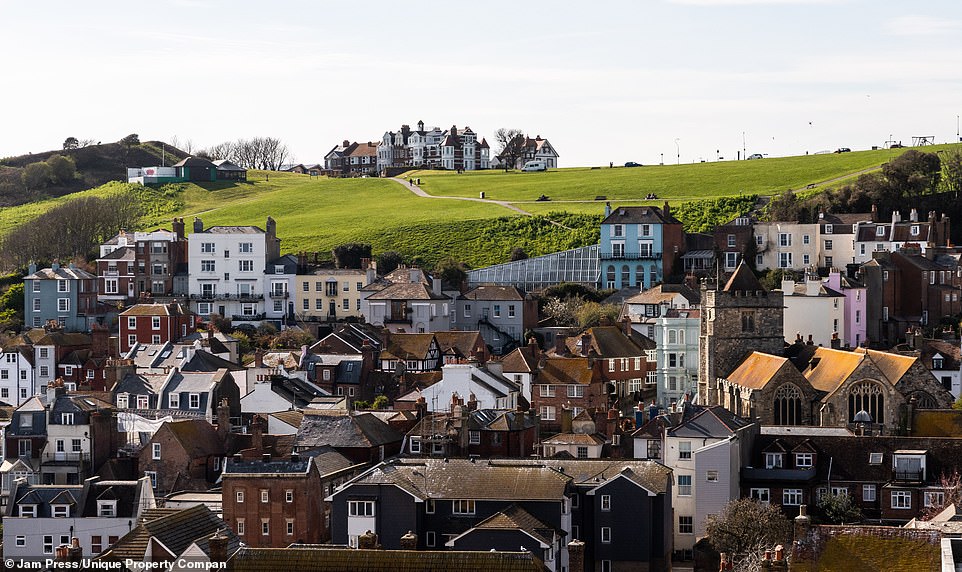 The property, in blue, has a long history dating back to the 19th history and has been used as a music venue and ballroom over the years

The caves were reportedly named after a nearby parish church and have been used as a hospital, an air-raid shelter, a ballroom and a music venue.

The earliest written reference tells the tale of an old couple who were fired from the town workhouse for misbehaviour and who lived inside the caves from 1783.

In the 1820s, the caves were rediscovered by a local grocer named Joseph Golding and in 1864 the caves became a tourist attraction with a spectacle known as ‘Smugglers Adventure’, about how the network was allegedly used for smuggling on the south coast of England 200 years ago.

During the Second World War they served as an air raid shelter and a temporary home. 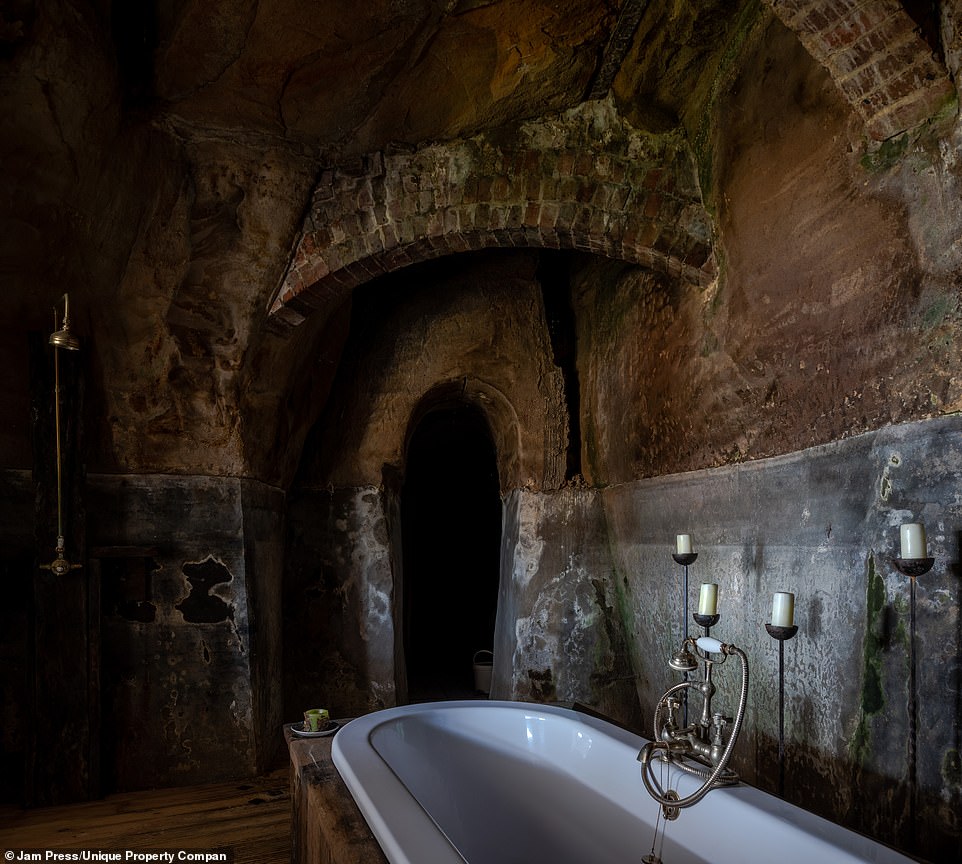 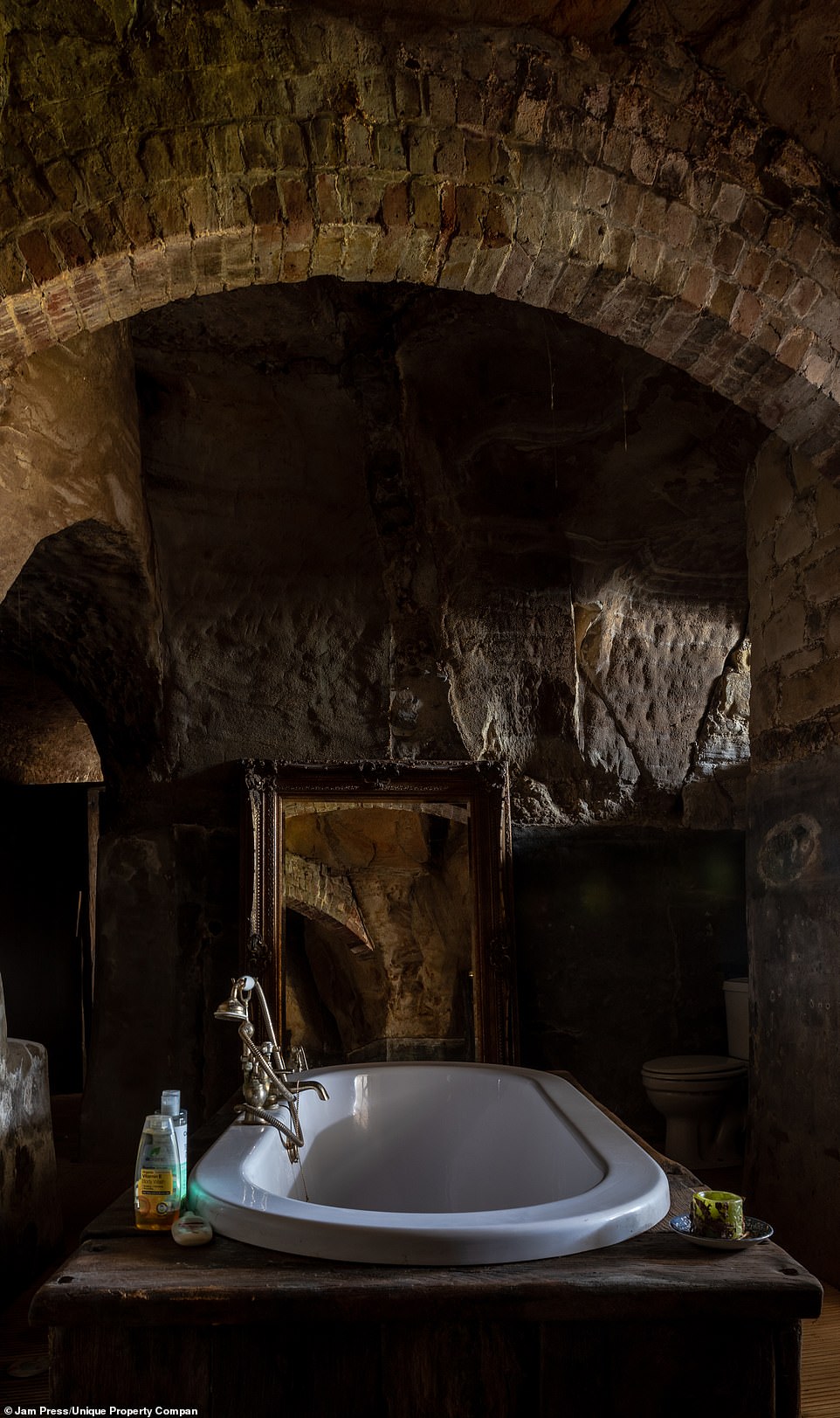 The atmospheric location makes something as traditionally mundane as a sink appear beautiful, as it does in this picture from sellers Unique Property 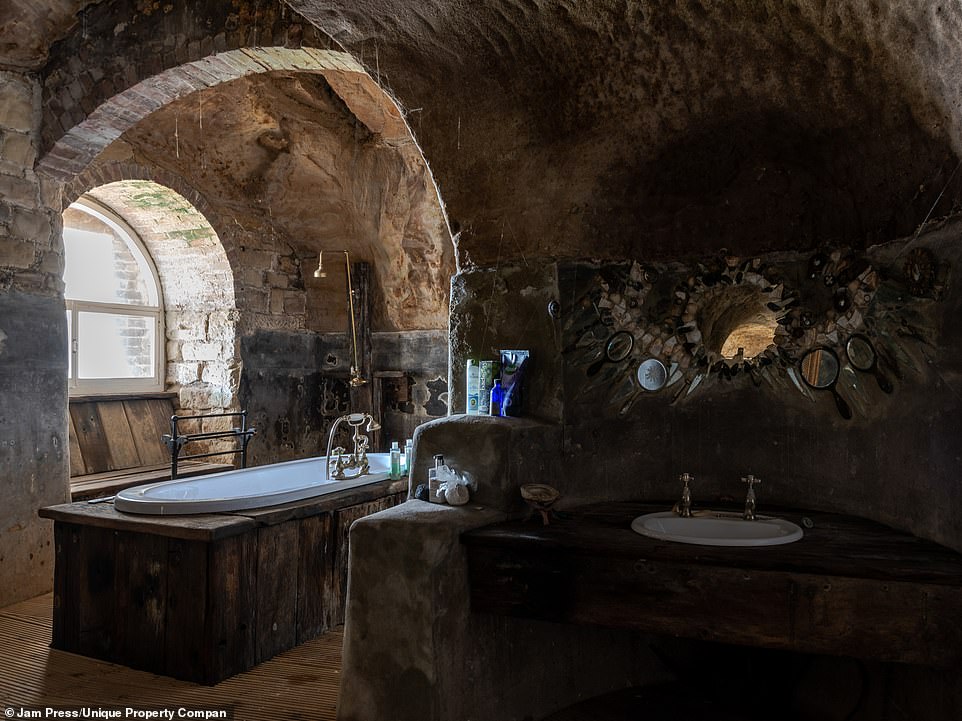 Would-be buyers can enjoy looking out at the incredible East Sussex views whilst having a soak in this picturesque bathroom in West Hill Villa, East Sussex 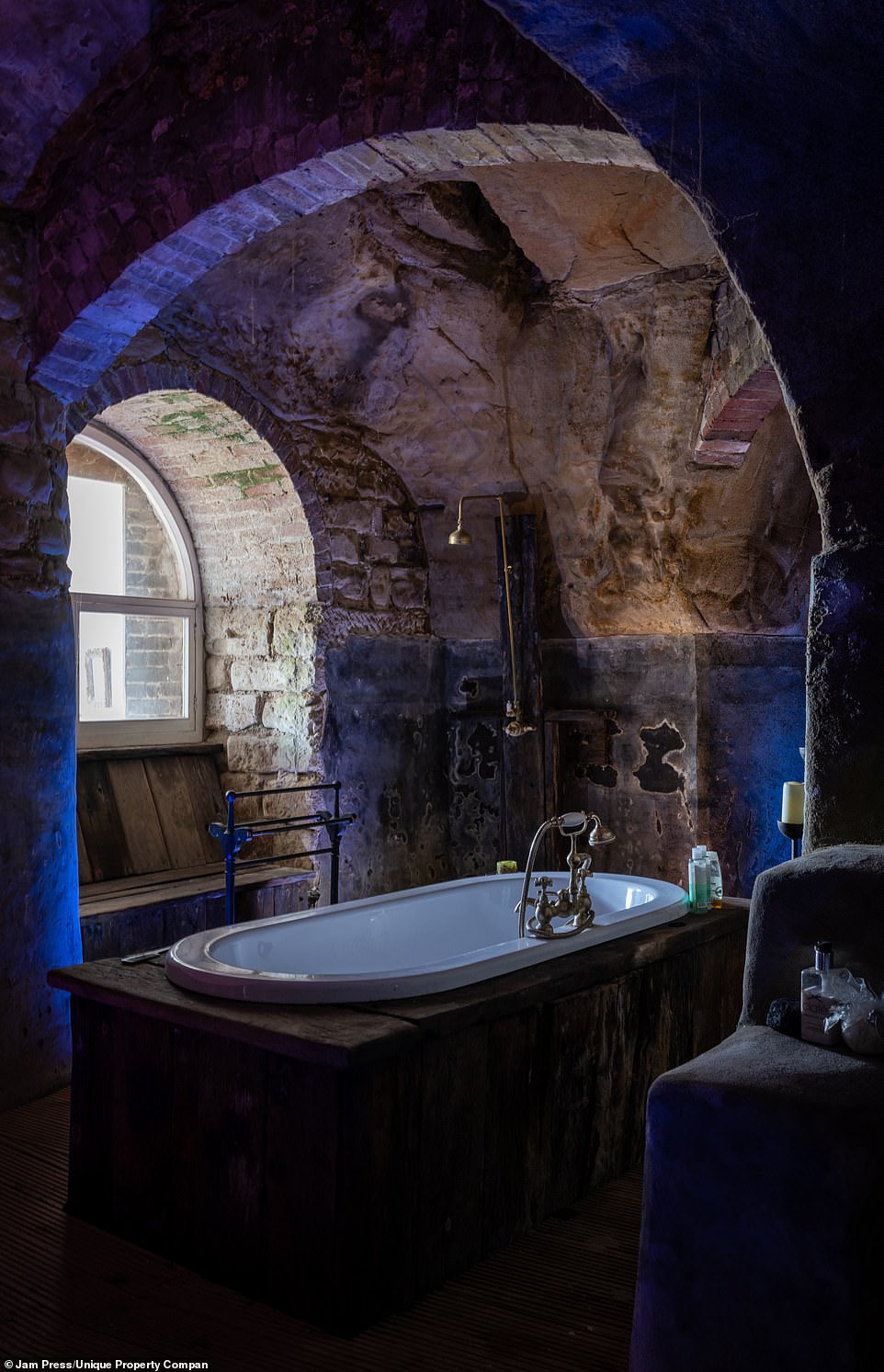 The spacious bathtub in the incredible cave-set bathroom of West Hill Villa, originally built in the 19th century and available for £1.5million 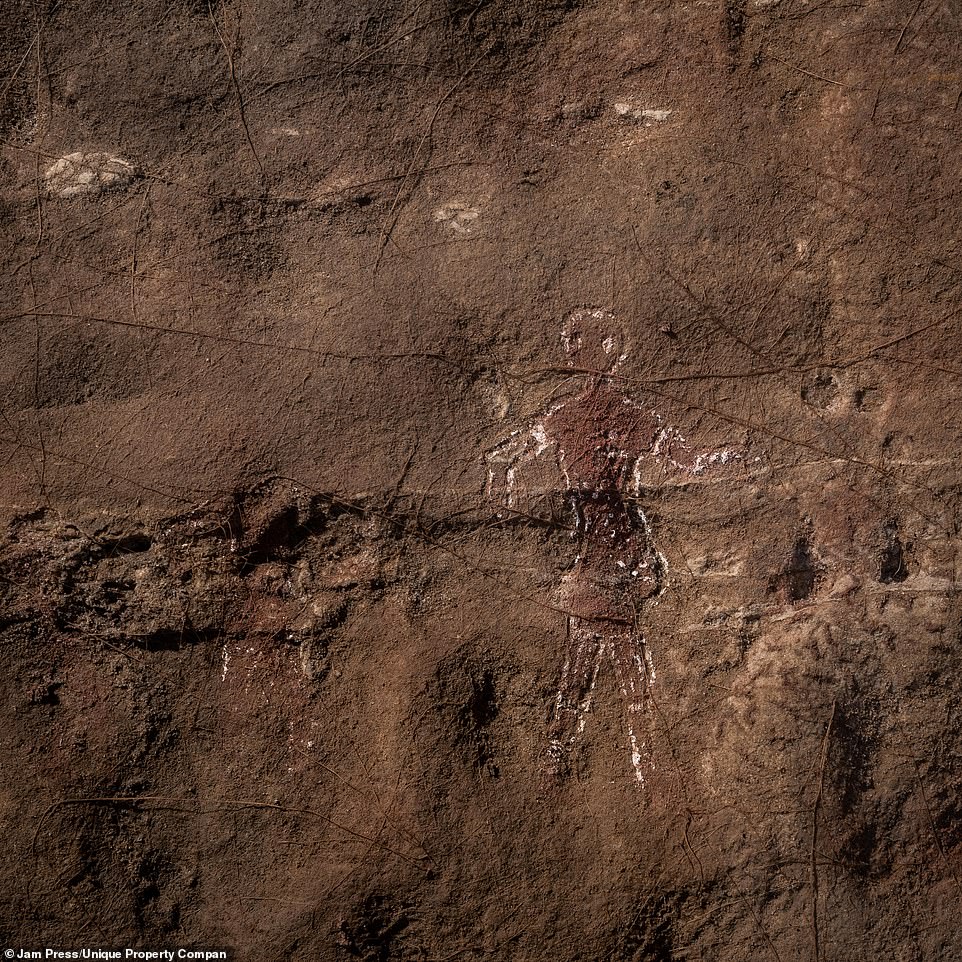 The home was built in the 1800s and features drawings from some of those to have hidden within the St Clements Caves in Hastings, East Sussex 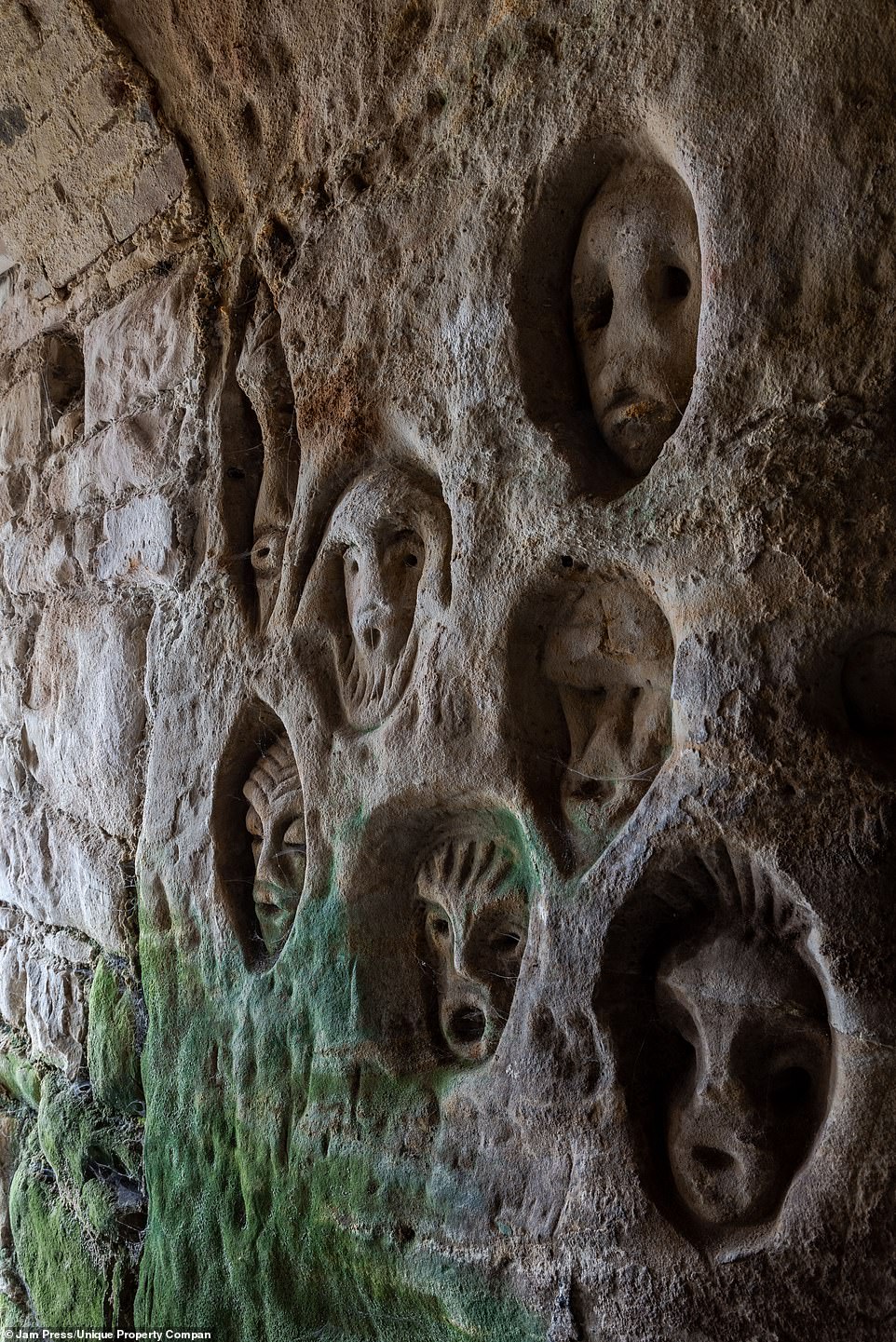 The home is available for £1.5million and boasts incredible features such as this wall full of crude faces discovered in the network 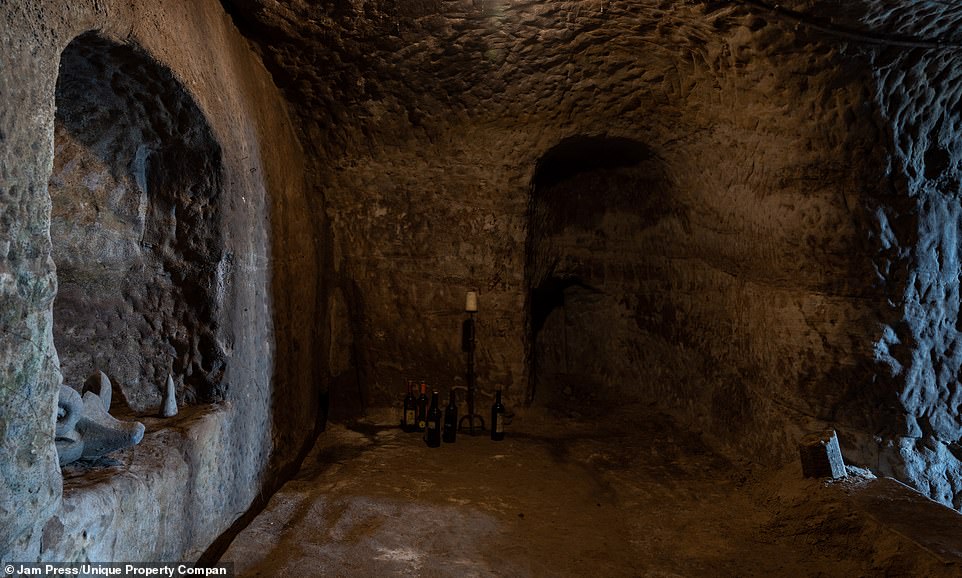 It has since been visited by the Prince and Princess of Wales, as well as Prince Albert and Prince George Frederick.

‘An historic Grade II Listed property with views over the rooftops and shoreline and across the sea, the house also backs onto the lovely open spaces of the West Hill and is a short walk into the centre of the historic Old Town. 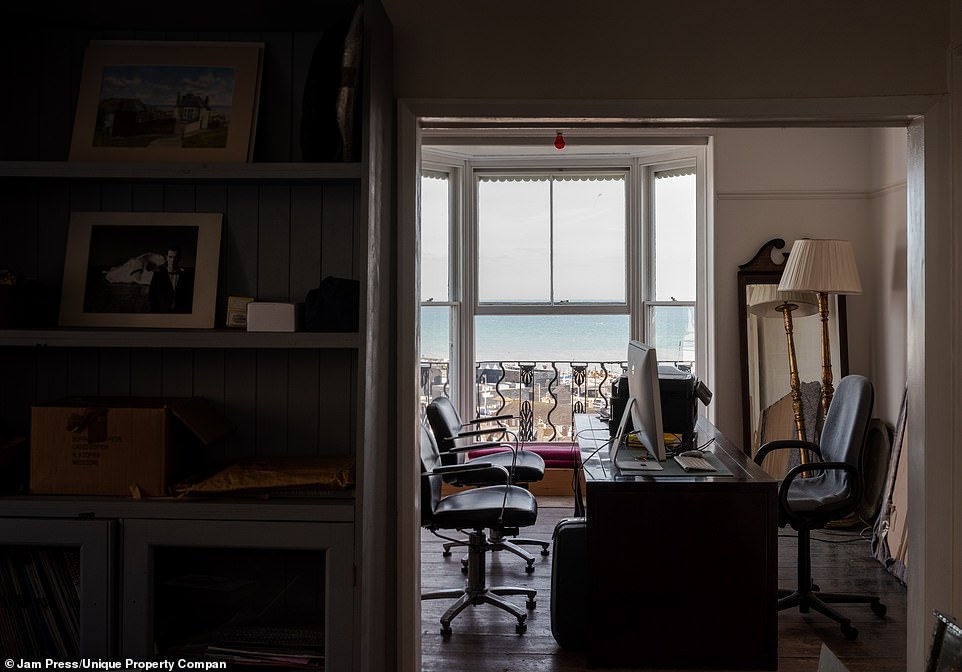 The entrance into the study looks incredible in this picture, with views of the sea clearly visible out of the window overlooking the town 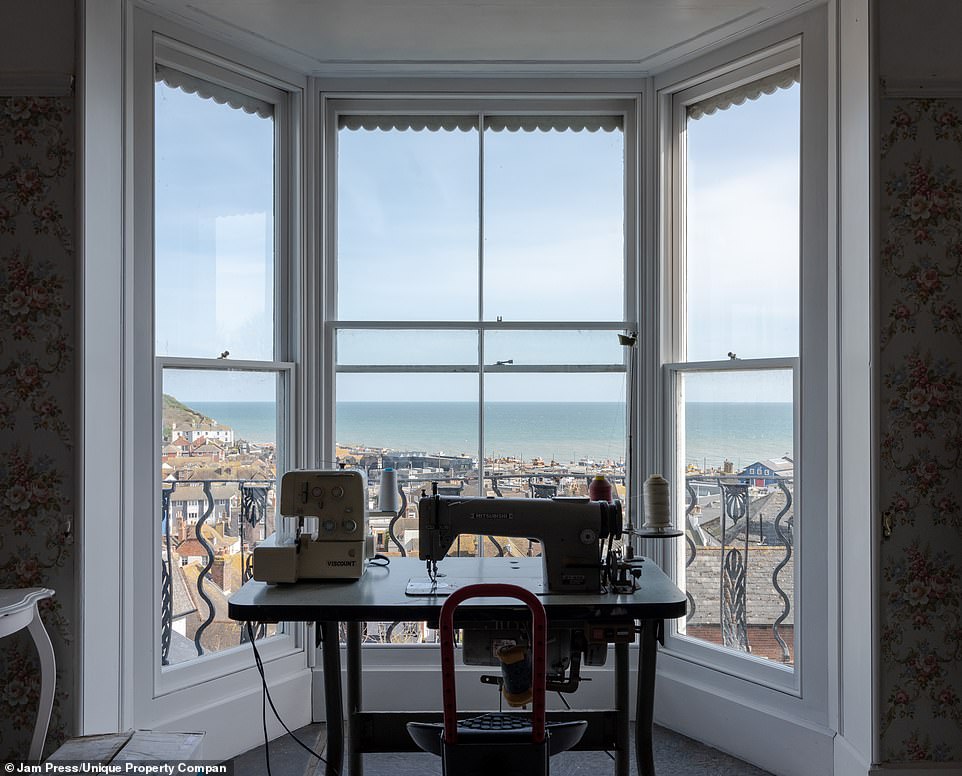 This looks like practically the perfect spot to stop to do some sewing or other activities, although the view could possibly prove distracting to some 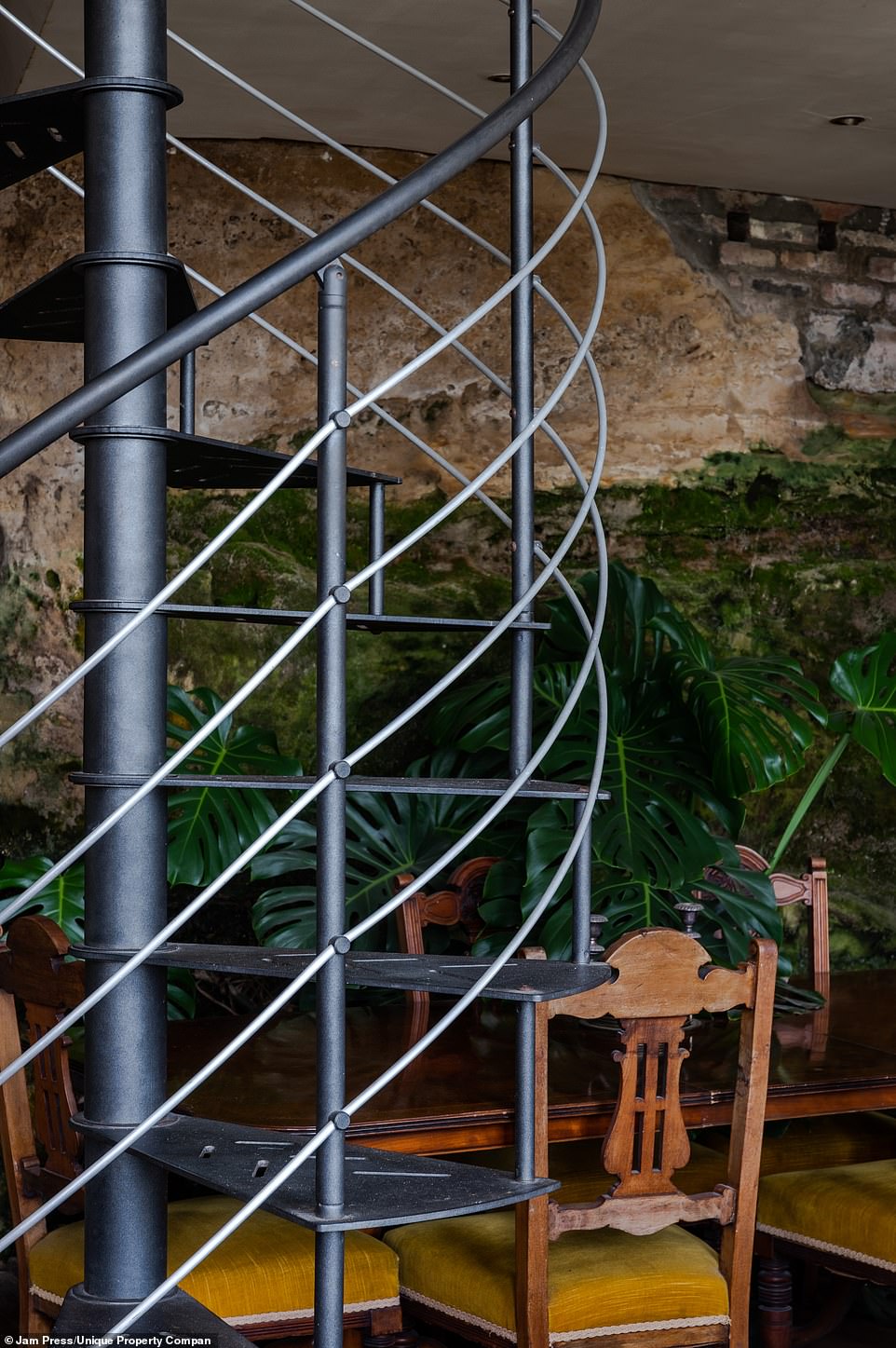 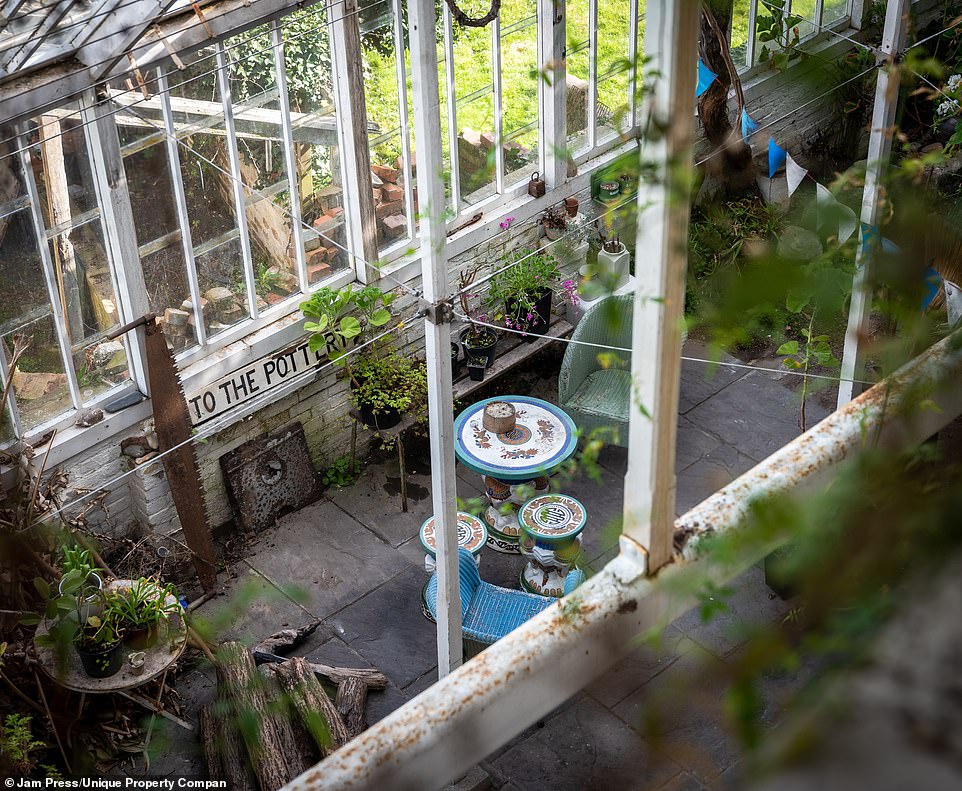 West Hill Villa also features a 90ft orangery forming the west wing of the house which houses a fish pool, grapevines and other exotic plants 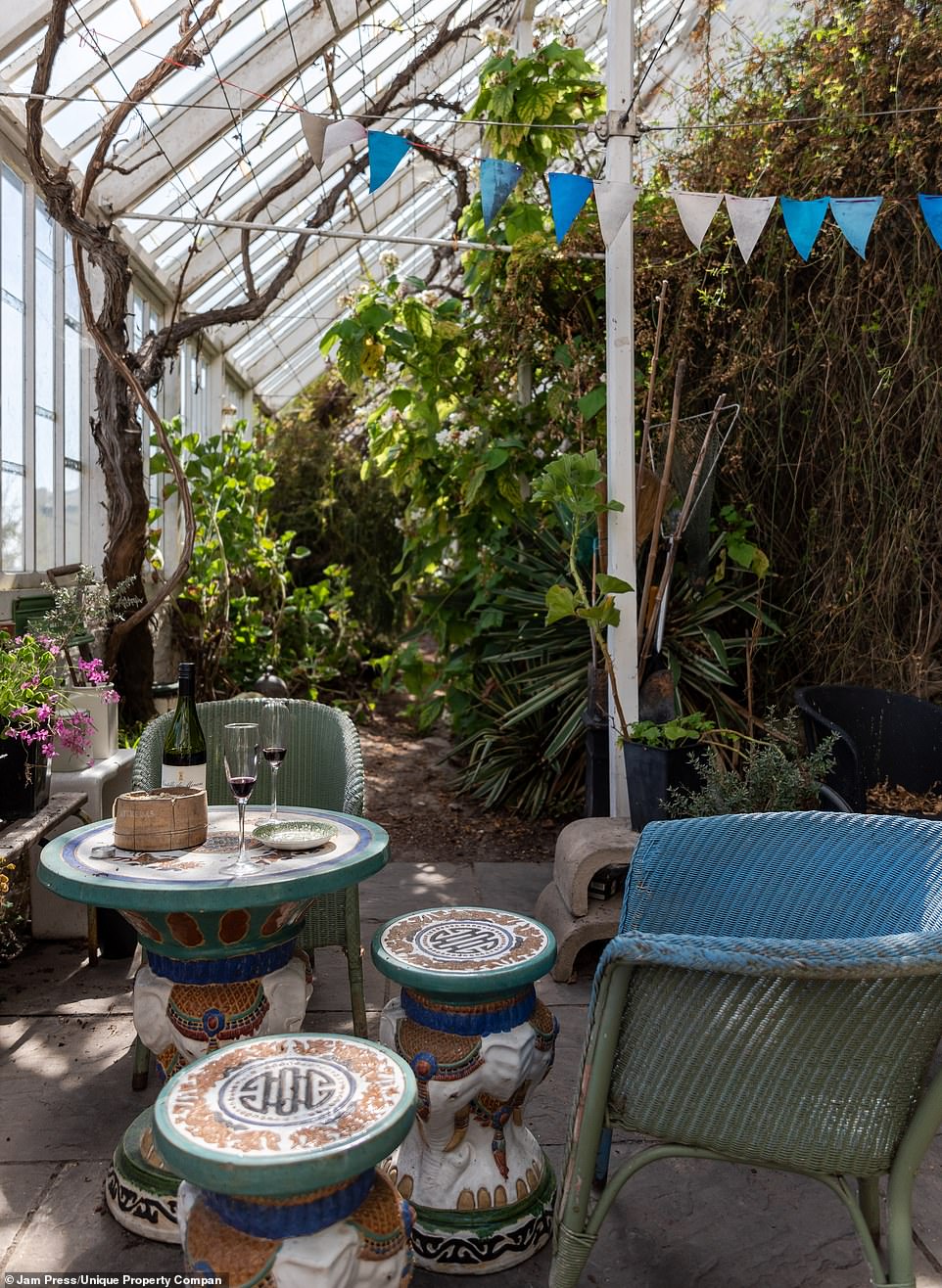 A bottle of wine and bunting seems to have already been laid out for those wanting to visit the home, available for £1.5million 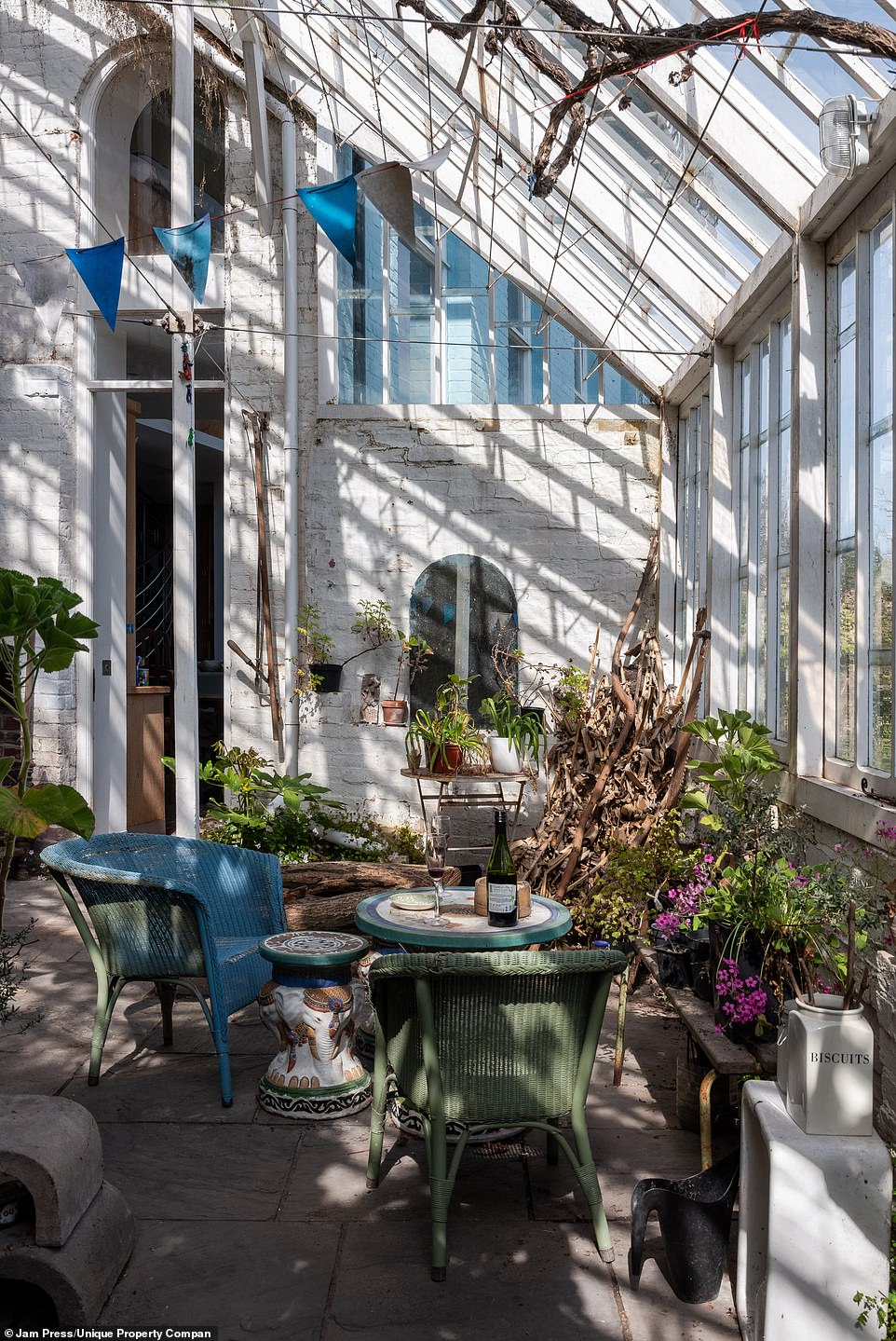 The orangery looks the perfect place to while away a few hours with friends, although the biscuit selection looks a lot to be desired 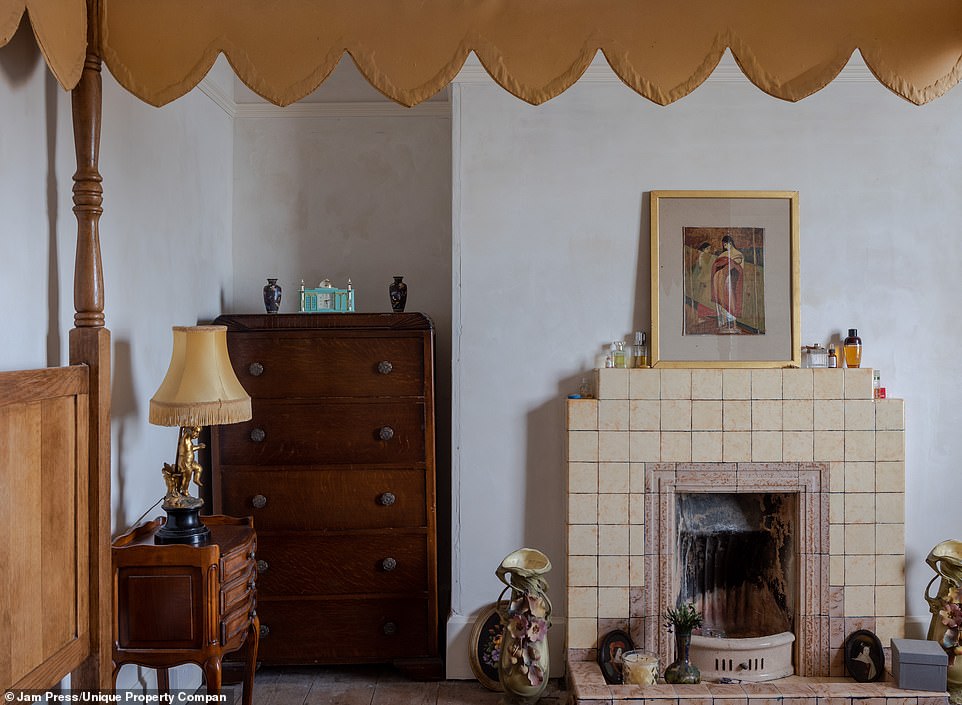 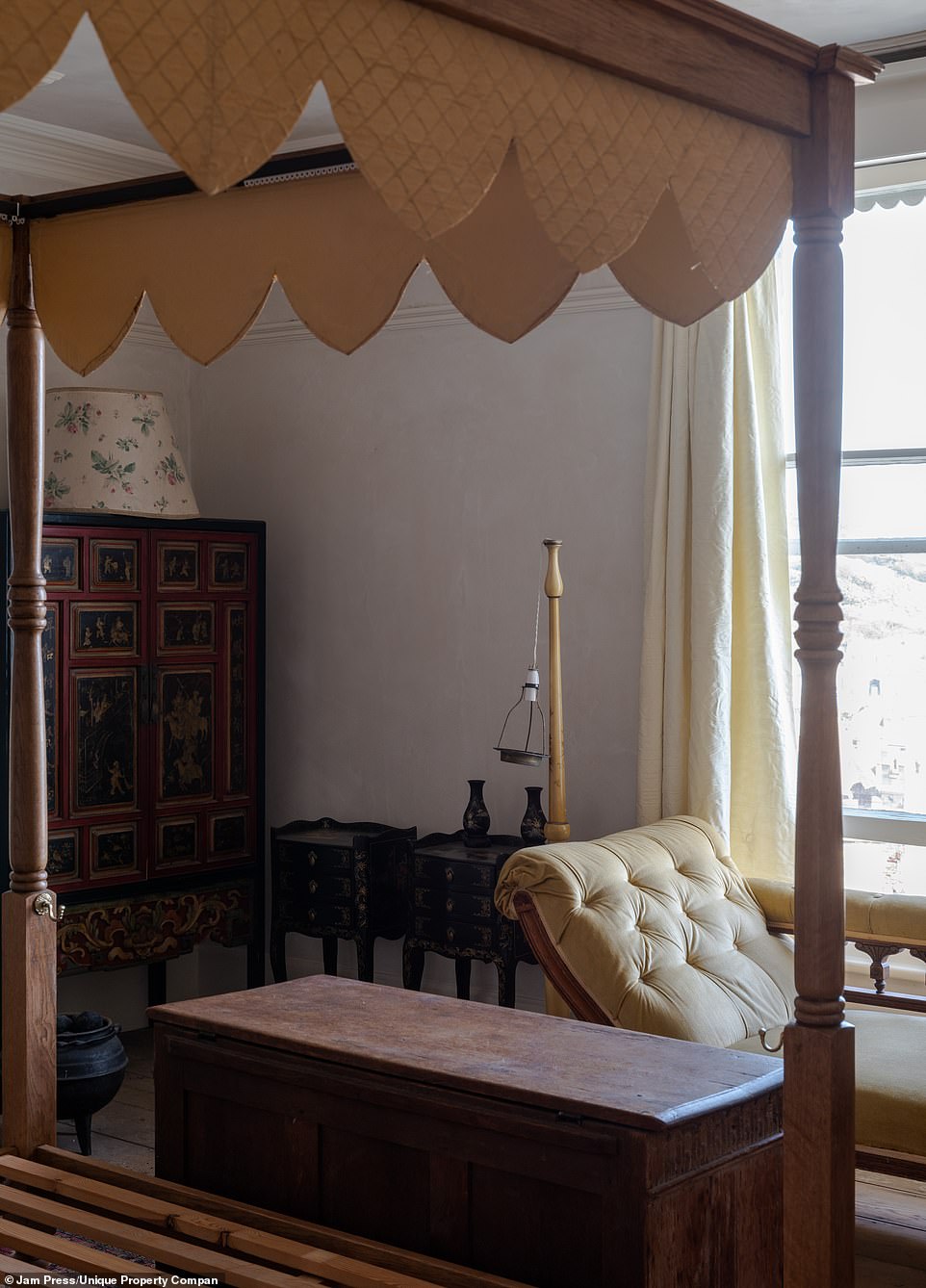 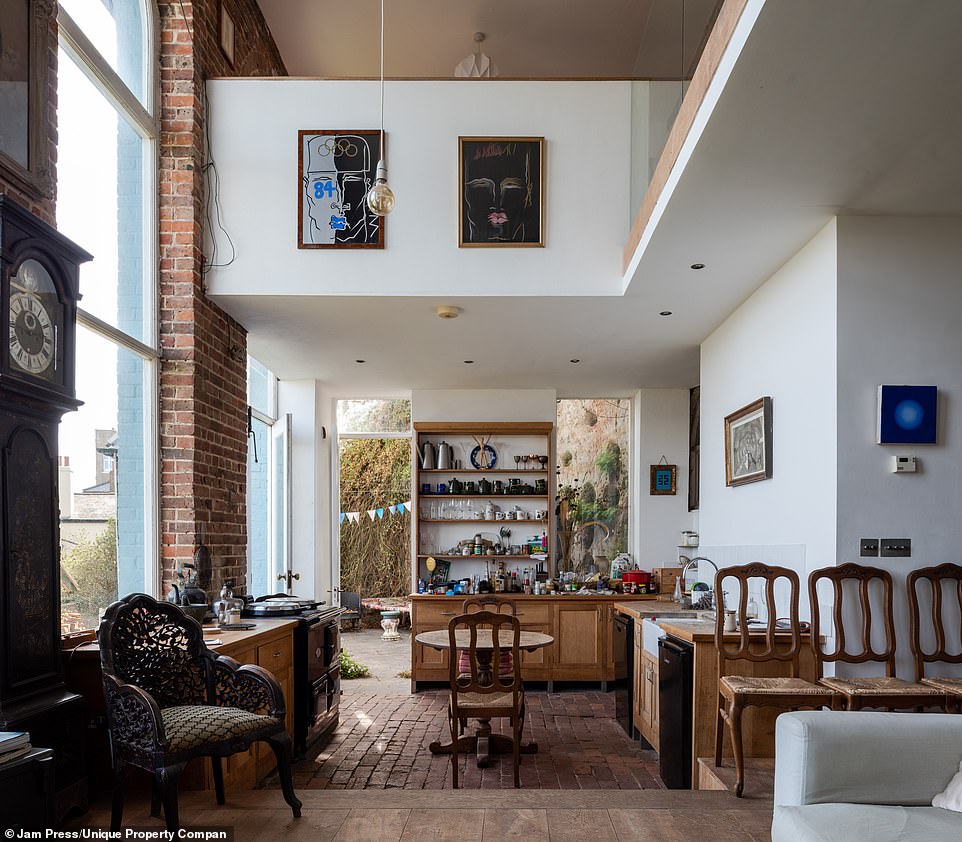 The lounge alone of the property would surely be enough to take the breath away of visitors to West Hill Villa in Hastings, East Sussex 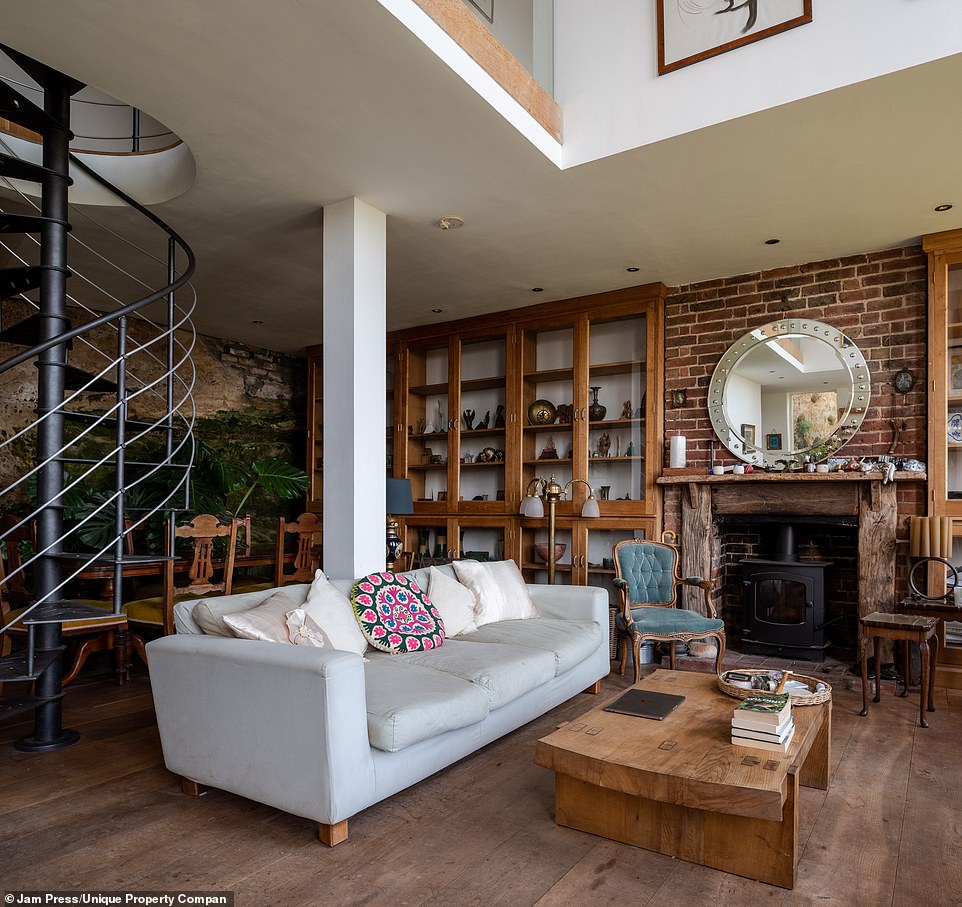 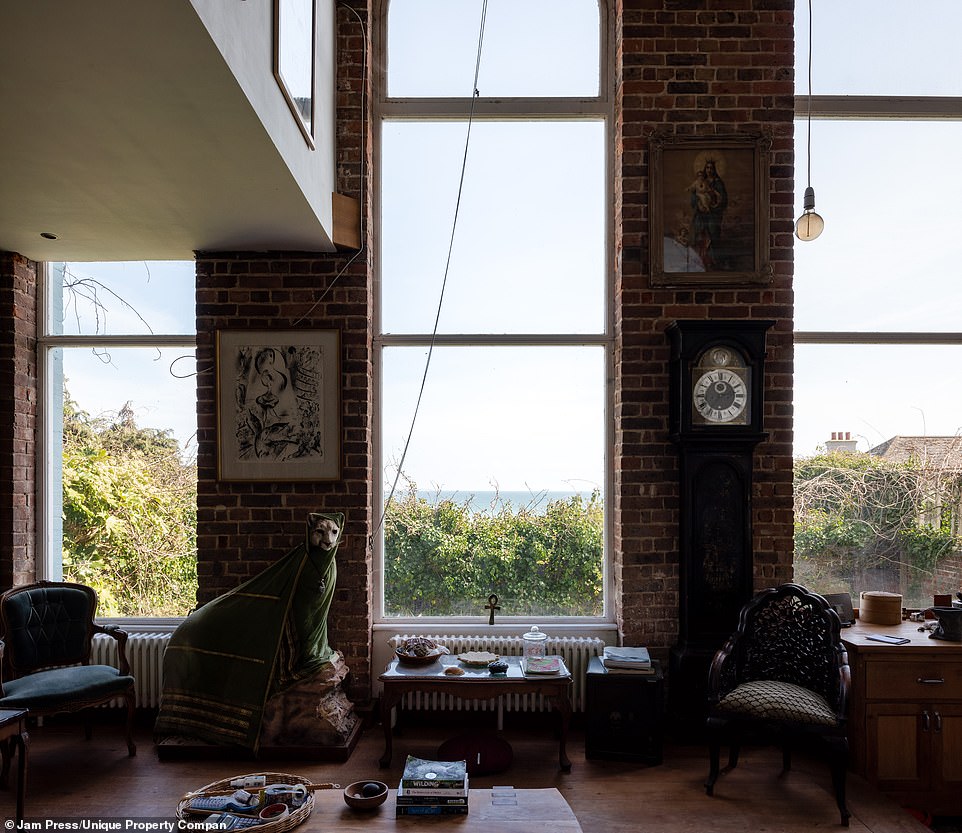 The windows of the lounge let in plenty of light for those settling down to read a book or entertain friends in West Hill Villa, Hastings 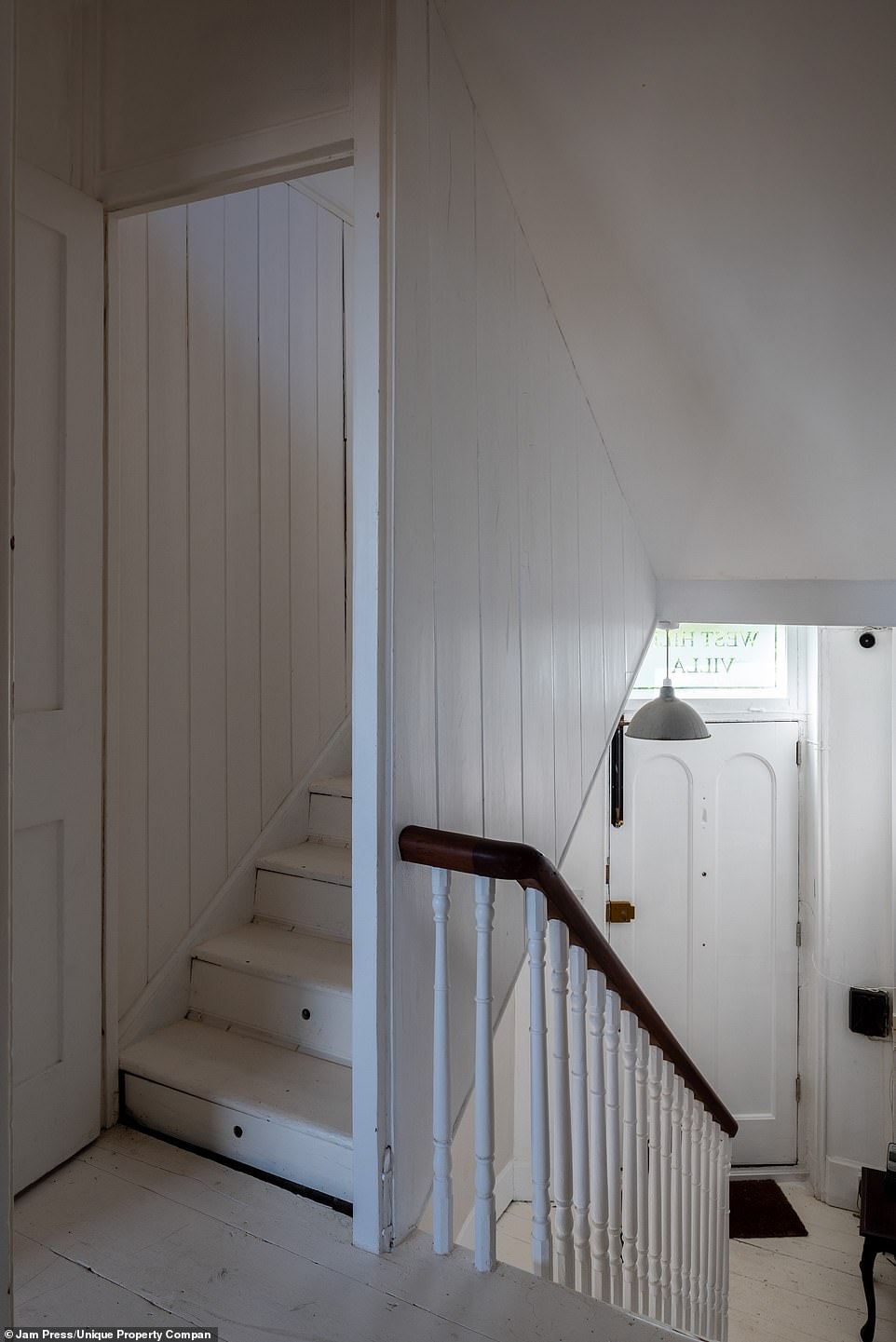 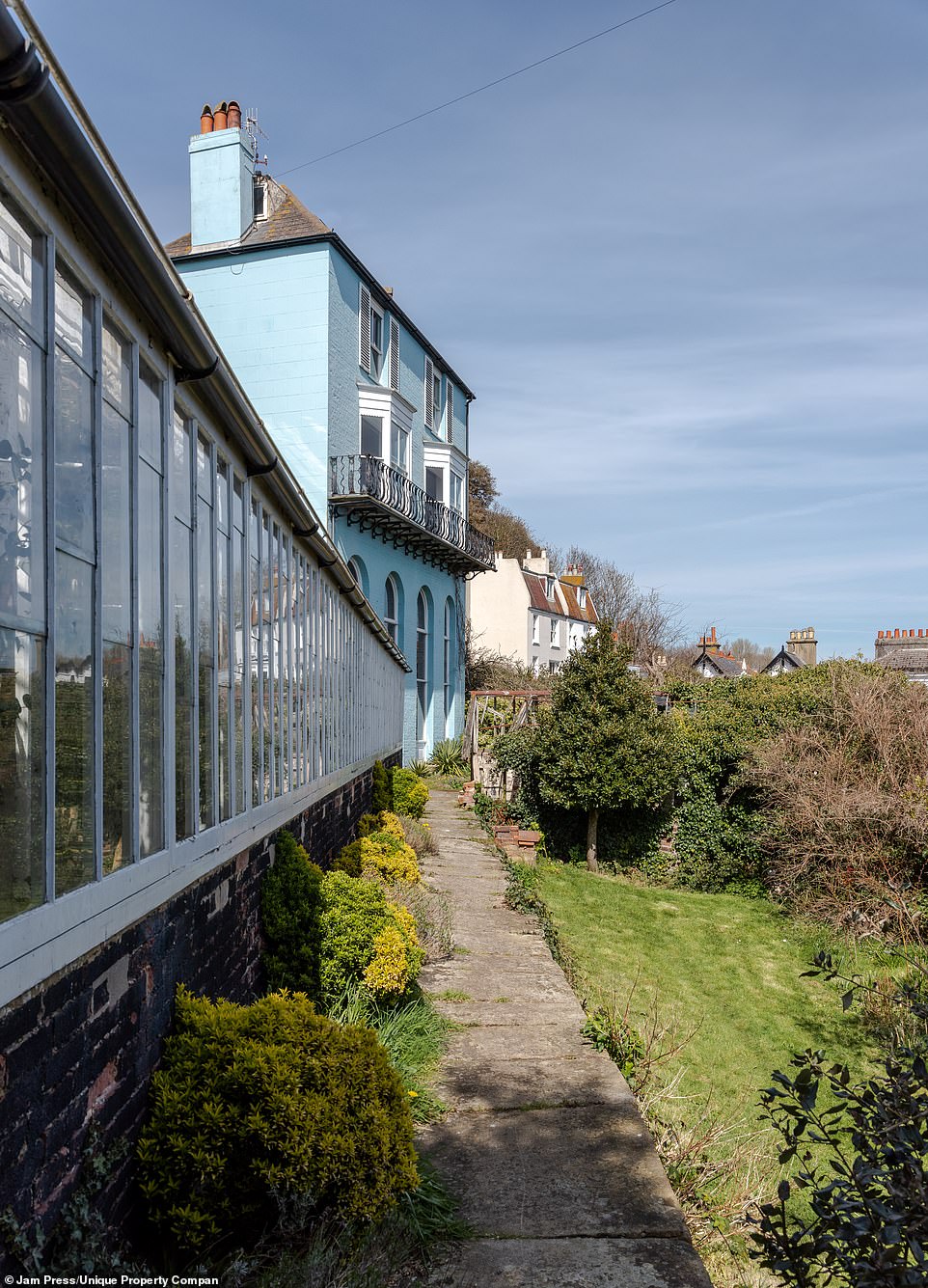 The orangery forms the west wing of the home and continues for 90ft, giving the home a unique look above the seaside town of Hastings

Built Circa 1800, the house is constructed of brick and built into the sandstone bedrock of the West Hill. The old Hastings Pottery was located in the lower part of the house, which opens into vaulted caves. These very beautiful and historic caves have now become an extraordinary bathroom space and meditation area.

‘A 90ft orangery forms the west wing of the property and houses a fish pool as well as grapevines, banana trees and other exotic plants some of which are reputed to have been brought by Captain Cook and the orangery used as a safe haven for plants found on his voyages before being transported to Kew Gardens.

‘The orangery is a wonderful soaring space which is heated year-round by the sun.’

The historic home is being sold with Unique Property.

What are the St Clements Caves and what once went on there?

They were discovered in the 1820s by local grocer Joseph Golding who had been cutting a garden seat into the rock when his pick broke through.

Billed as smugglers’ caves, it has previously been used as a hospital, air raid shelter, music venue and ballroom.

The caves are said to be haunted with several ghostly apparitions reported over the years and in 1975 a sawn off arm bone was discovered, believed to date back to the Napoleonic Wars.

A time capsule was buried in the caves in 1966 to mark the 900th anniversary of the Battle of Hastings which will be opened in 2066.