Boulder: Three days after he was led away in handcuffs from a Boulder supermarket where 10 people were fatally shot, the suspect has appeared in court for the first time and his defence lawyer asked for a health assessment “to address his mental illness”.

Kathryn Herold, the lawyer for suspect Ahmad Al Aliwi Alissa, provided no details about what he might suffer from. 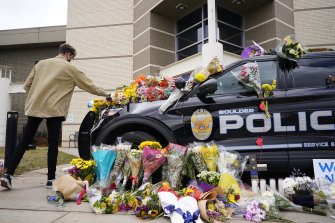 A man leaves a bouquet on a police car parked outside the Boulder Police Department following the shooting. Credit:AP

During the brief hearing on Thursday, local time, Alissa appeared in court wearing a mask. He didn’t speak other than to say “yes” to a question from the judge and was advised of the 10 charges of first-degree murder he faces. He did not enter a plea, which will come later in the judicial process.

A law enforcement official briefed on the shooting had previously said the suspect’s family told investigators they believed Alissa was suffering some type of mental illness, including delusions. 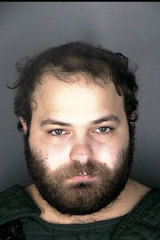 Relatives have described times when Alissa told them people were following or chasing him, which they said may have contributed to the violence, the official said. The official was not authorised to speak publicly and spoke on condition of anonymity.

It was the first time that Alissa was seen in public since he was arrested inside the King Soopers supermarket in Boulder on Monday and treated at a hospital for a leg wound.

Alissa was last seen handcuffed and being led out of the supermarket by police. He had removed all clothing except his shorts before being taken into custody. A rifle, a green tactical vest and a handgun were recovered inside the supermarket, according to an arrest affidavit.

While most Colorado court proceedings have been conducted with suspects appearing by video during the pandemic, District Judge Thomas Francis Mulvahill ordered Alissa to appear before him in court though the public and the media were not allowed inside.

Dozens of media trucks and reporters stood outside the courthouse on a cold, clear Colorado morning. There was no sign of protesters or victims’ families.

According to the arrest affidavit, the suspect bought a Ruger AR-556 pistol – which resembles an AR-15 rifle with a slightly shorter stock – on March 16, six days before the attack. Authorities have not disclosed where the gun was purchased.

According to two law enforcement officials, Alissa was born in Syria in 1999, emigrated to the US as a toddler and later became a US citizen. He would need to be a citizen to buy a gun. The officials were not authorised to speak publicly and spoke on condition of anonymity.

An AR-15-style gun recovered inside the supermarket was believed to have been used in the attack, said a law enforcement official briefed on the shooting who was not authorised to speak publicly and spoke on condition of anonymity.

More than 500 people bundled in winter jackets and wool hats attended a downtown candlelight vigil on Wednesday night to mourn the victims and comfort one another. They observed a moment of silence; violins soothed the crowd; a woman sang Ave Maria as candle flames flickered in the crisp air. A star-shaped light usually turned on for the holidays glowed on a mountain overlooking the open square.

Michele Weiner-Davis, a Boulder family therapist, offered the community some words of wisdom.

“Whatever you’re feeling, whatever you’re thinking, no matter how uncomfortable, it’s completely natural,” Weiner-Davis said. “Be patient with yourself. Additionally, be just as compassionate with the people in your lives who might also be struggling.”

Earlier on Wednesday, hundreds of people paid their respects during a police procession for Talley as his body was taken to a funeral home in the Denver suburb of Aurora.

Police also announced that people whose cars were left in the supermarket parking lot on Monday could retrieve them.