Controversial comedian Jerry Sadowitz defends his Edinburgh Fringe show cancelled over ‘racism, homophobia and misogyny’ saying getting his penis out on stage was ‘for the purposes of JOKE’ – but admits ‘I don’t always get it right’

A comedian who was cancelled by an Edinburgh Fringe venue after he ‘got his penis out on stage’ has hit back at critics, saying it was a joke and that people who were offended should stick to Carry On Films, but admitted he doesn’t ‘always get it right’.

Jerry Sadowitz, who also performs magic as part of his routine, claimed his show had been ‘cheapened and simplified as unsafe, homophobic, misogynistic and racist’, resulting it in being cancelled at The Pleasance at the Edinburgh International Conference Centre.

The 60-year-old’s second night was pulled after the venue said his material failed to ‘align with [their] values.’

Taking to Twitter, Mr Sadowitz end his show, suggesting those who are offended by its content ‘stick to Carry On films’ and that it was not his intention to upset anyone with its content. 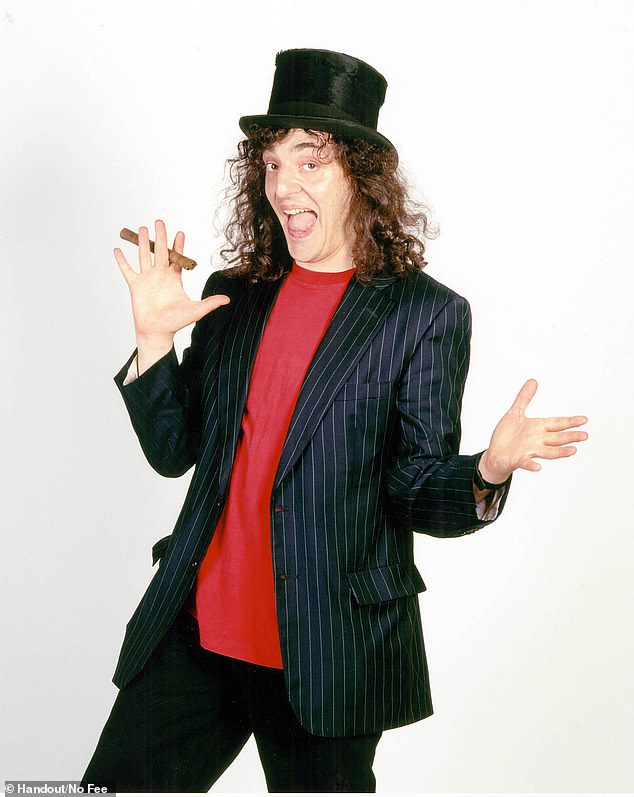 It came after a female audience member claimed the American-born Scot got his penis out in front of a woman on the front row and used a racial slur to describe Conservative leadership contender Rishi Sunak.

She told the Scottish Sun that Mr Sadowitz called the Prime Minister hopeful ‘a p***’ and claimed ‘the economy was awful because it is run by ‘blacks and women’.

Some furious fans said bosses already knew he was controversial, as the original listing carried a warning which read: ‘This show contains strong language and themes some may find distressing.’

A few took to Twitter to brand The Pleasance ‘pathetic’, while others said the cancellation amounted to ‘censorship’.

One fan said she thoroughly enjoyed the set but that about ’20 lefties’ had walked out mid-way through.

‘I don’t wish to humiliate the Pleasance but they are doubling down on their position and I don’t want to be made the victim of that’, he wrote.

‘I did a 75 minute show for 600 people that went pretty well and left with no hint of anything going wrong. 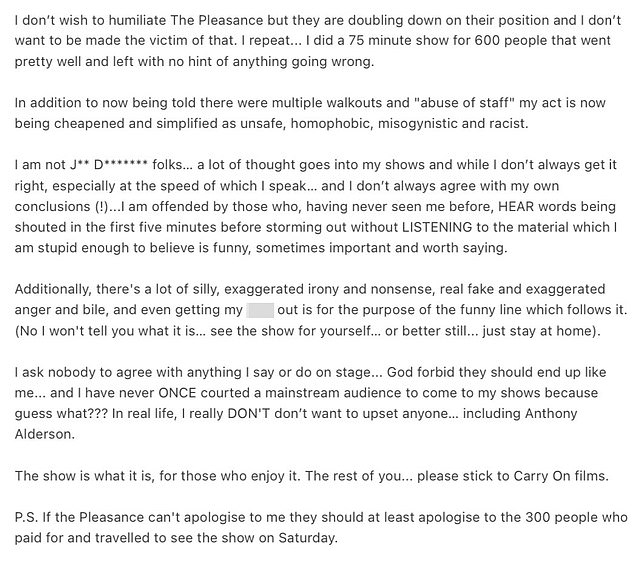 ‘In addition to now being told there were multiple walkouts and abuse of staff, my act is now being cheapened and simplified as unsafe, homophobic, misogynistic and racist.

‘A lot of thought goes into my shows and while I don’t always get it right, especially at the speed of which I speak… and I don’t always agree with my own conclusions (!)… I am offended by those who, having never seen me before, HEAR words being shouted in the first five minutes before storming out without LISTENING to the material.

‘Additionally, there’s a lot of silly, exaggerated irony and nonsense, real fake and exaggerated anger and bile, and even getting my d*** out is for the purpose of the funny line which follows it.

‘I ask nobody to agree with anything I say or do on stage… In real life, I DON’T want to upset anyone.

‘The show is what it is, for those who enjoy it. The rest of you… please stick to Carry On films’.

He added that the Pleasance show issue an apology to those who had already paid to see his cancelled show on Saturday.

The Pleasance has so far refused to confirm what part of the act was deemed offensive, but it said in a statement that ‘opinions such as those displayed by Sadowitz are not acceptable.’ 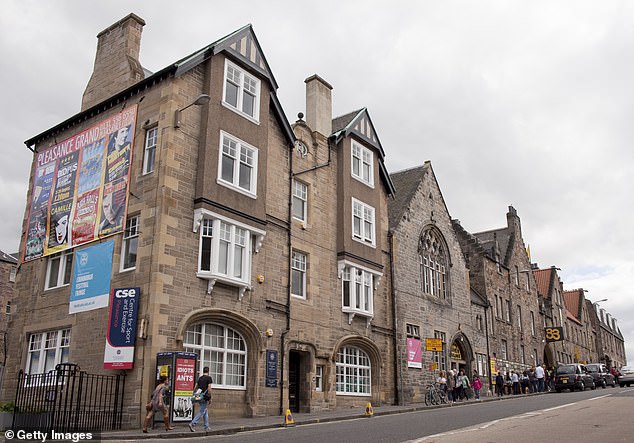 The Pleasance (pictured)has so far refused to confirm what part of the act was deemed offensive, but it said in a statement that ‘opinions such as those displayed by Sadowitz are not acceptable’

‘Opinions such as those displayed on stage by Sadowitz are not acceptable and The Pleasance are not prepared to be associated with such material,’ the statement read.

Announcing the show’s cancellation, The Pleasance director, Anthony Alderson, added: ‘The Pleasance is a venue that champions freedom of speech and we do not censor comedians’ material.

‘While we acknowledge that Jerry Sadowitz has often been controversial, the material presented at his first show is not acceptable and does not align with our values.

‘This type of material has no place on the festival and the Pleasance will not be presenting his second and final show.’

Refunds will be issued to those who bought tickets to the Saturday show, the venue said.

In a recent promo video, Sadowitz held up a bird puppet as he told would-be patrons what they could expect.

A further show description vowed he would return with his ‘whacky impressions of Greta Thunberg, Frankie Boyle and deep vein thrombosis’.

It said he ‘also promises to do less hate-fuelled swearing and focus more on faux liberal pish in order to appeal to the middle class and their disposable income and personalities’.

‘Patrons may wish to drink alcohol pre-show to avoid boredom, embarrassment and guilt.’