Which bright spark left eco cars at COP26 with no juice? Green vehicles but red faces as there are too few charging points at climate summit

When organisers of COP26 unveiled the vehicles that would ferry VIPs around the global environmental summit, electric cars were the obvious green option.

But it has now emerged that there are not enough power points in Glasgow to charge the fleet, leading to the embarrassing prospect that massive generators will have to be shipped in to provide the energy.

There are fewer than 250 electric charging points in the city – about one for every 23 such cars. 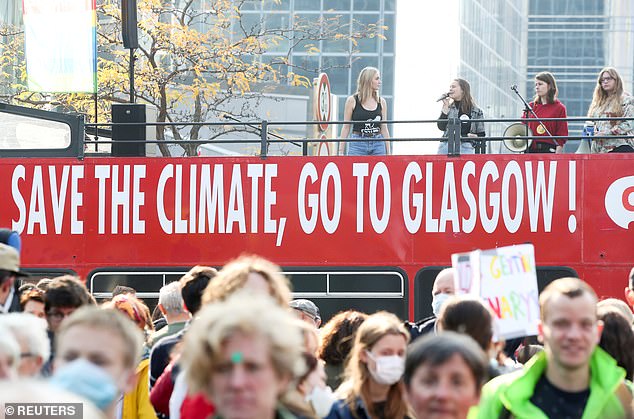 Crowds in Brussels, Belgium, taking part in a climate march ahead of the highly anticipated COP26 summit in Glasgow

And when the conference starts next Sunday, demand will soar from the extra 250 Jaguar Land Rovers on hand for high-level delegates.

A COP26 spokesman admitted that generators might be needed – but insisted that they would run on hydrogenated vegetable oil derived from waste products such as chip fat, rather than dirtier fuels such as diesel.

The Government said the Jaguars being used, including I-Pace SUVs, ‘have all been sourced from existing fleets in the UK, helping ensure the carbon footprint remains low’.

Jaguar Land Rover said the cars, which each cost more than £62,000, could travel 292 miles on a single charge – enough to travel from Glasgow to John O’Groats.

COP26, held at the the Scottish Event Campus, will be the highest-profile event ever staged in Scotland, with around 25,000 people and 120 heads of state set to attend.

A huge security operation, codenamed Operation Urram, will involve 10,000 officers and 200 police dogs deployed each day, including officers on secondment from England.

Specialist ‘protest removal’ squads will be ready to crack down on any illegal disruptions, with the Armed Forces and coastguard on alert for serious threats.

In addition to protests from the likes of Insulate Britain, Extinction Rebellion and Greenpeace, Glasgow faces more disruption from the sheer number of extra visitors, exacerbated by RMT union rail strikes and key road closures.

COP26 has been described as the ‘last best hope for the world to get its act together’ on climate change – but China’s President Xi Jinping and Russia’s President Vladimir Putin will not attend, delivering a blow to hopes of substantial progress.

It is hoped the Queen will attend a banquet for delegates.

Down-to-earth facts behind the scenes at COP26…

UK takes the lead with its fossil fuel phase-out

As COP26 host, Britain can be proud of its record for reducing dependence on fossil fuels in the past decade.

A snapshot of the country’s energy mix shows no coal was used to produce electricity on Friday.

Ten years ago coal provided almost 40 per cent of our supply and 1.5 per cent last October. 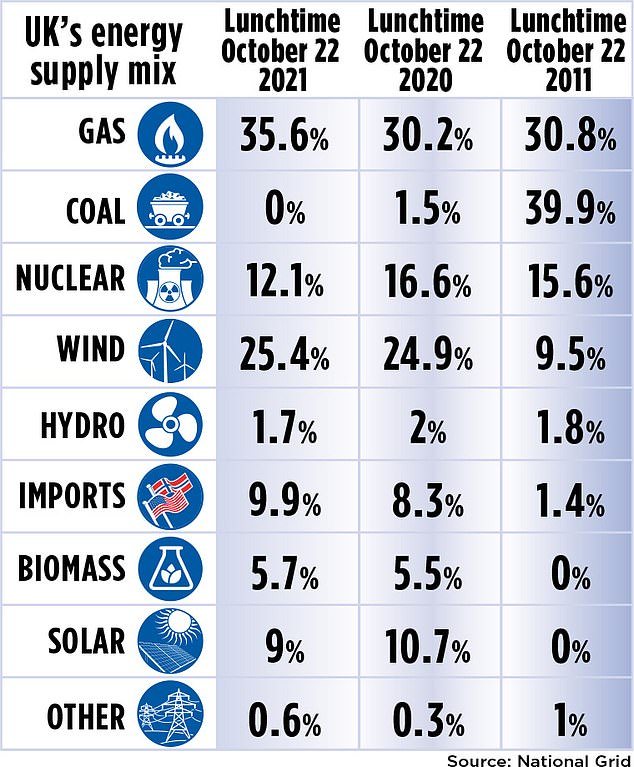 By contrast, China, whose president is snubbing COP26, saw 56.8 per cent of its energy generation last year coming from coal.

The UK’s net zero carbon emissions drive is racing ahead, too, as renewable energy – from the sun, wind and water – made up 36.1 per cent of our power supply on Friday. That’s more than triple their 11.3 per cent contribution in 2011.

Britain’s 11,000 wind turbines now generate around a quarter of our electricity needs and solar power has shot up from zero generated in 2011 to around ten per cent now.

But Britons flummoxed by their ‘carbon footprint’

More than two-fifths of Britons do not understand the term ‘carbon footprint’, a poll has found.

Despite massive media coverage, researchers found that 42 per cent of people do not know the meaning of the climate change phrase. In Leicester the figure is 53 per cent, and in Newcastle it is 46 per cent.

Of those questioned in the survey, 14 per cent thought it meant recycling waste, while another

14 per cent thought it was ‘something to do with the weather’.

And five per cent admitted they had ‘no idea’ at all what it meant.

Of the 13 cities surveyed for food firm Upfield, those with the best knowledge of the term were Glasgow, which is due to host the COP26 summit, and London, where 36 per cent did not understand the term.

In both Cambridge and Liverpool, it was 39 per cent.

According to the Oxford English Dictionary, ‘carbon footprint’ means the amount of carbon dioxide released into the atmosphere as a result of the activities of a particular individual, organisation, or community.