A Cornish fisherman’s sailing boat was vandalised by a second home owner angry because its mast spoiled their view, he has claimed.

Mike Bastian, 66, a lifelong oyster dredger, had to call the police after his ‘pride and joy’ was nearly sunk in a ‘calculated’ attack.

Mr Bastian, who has been working and living in the village of Feock all his life, was left devastated when his boat was severely damaged.

It was left on a council-owned beach once the oyster fishing season drew to a close at the end of March.

But last Thursday evening Mike received a call to say the leg of the boat had been removed, the anchor had been chucked away and the battery had been smashed in. 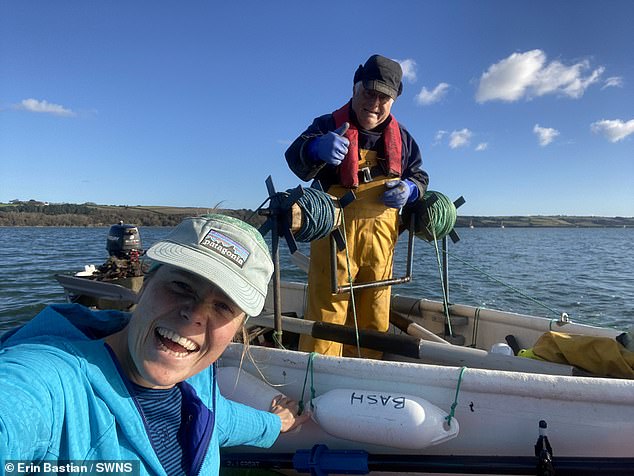 Mike Bastian, 66, a lifelong oyster dredger, had to call the police after his ‘pride and joy’ was nearly sunk in a ‘calculated’ attack. Mr Bastian is pictured with his daughter Erin, 32 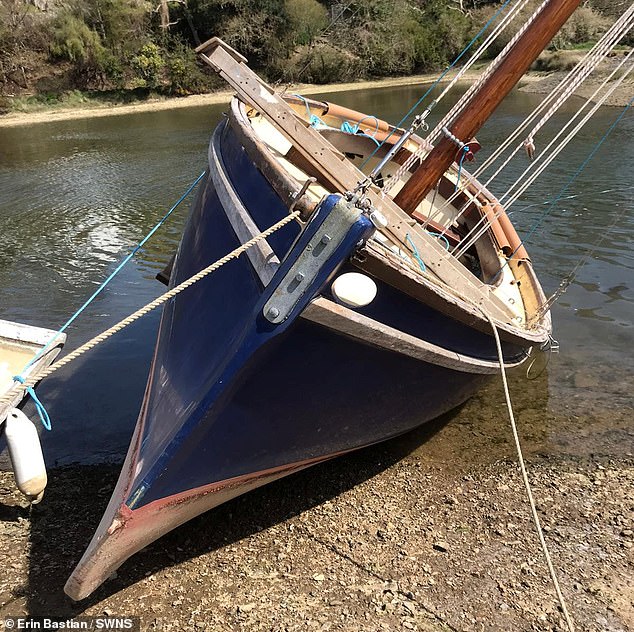 Mr Bastian, who has been working and living in his local community of Feock all his life, was left devastated when his boat (pictured) was severely damaged

His family had to rush to the beach to salvage the boat in the early hours – before it flooded during a high tide.

Mike’s daughter Erin, 32, said she suspected the culprit was a second home owner living in the village.

People in the area are in a battle with second home owners – and Erin said the vandalism was another example of locals being ‘bullied out’.

Mr Bastian has strong suspicions who the boat vandal is after hearing about other locals and their encounters with an ‘abusive’ man.

The father-of-three said: ‘I’m still fuming about it. I’m hoping the police are going to follow up on it. 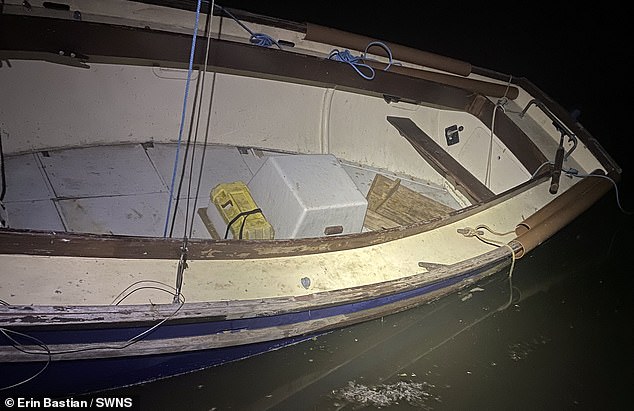 ‘I’m moving my boat later today. I can’t live eight miles from a boat worrying about it all the time. Every time you come round the corner you don’t know whether it will be stood up or fallen over.

‘A friend of mine has come up with a photograph of this guy. The suspicions in the village that it’s him are because he’s abused so many people.

‘People like that who continually abuse people, people do the same things over and over again and he is one of them. I’ve heard there are families terrified of him.’

Erin, who owns her own kayaking business, believes there are a number of residents who would take offence to seeing boats on the beach – since it would ‘spoil’ their view.

She said: ‘My dad saved this year for a new boat, his pride and joy, an old wooden working boat.

‘This week someone has callously damaged my dad’s boat by digging up his anchor and unbolting one of his support legs.

‘To be honest through local contacts and a lot of local gossip there’s an idea between local people who it might have been.

‘That’s obviously all speculation but you put two and two together.

‘Effectively where the public beach is – where people have stored their boats for as long as my dad can remember – there are lots of big, big houses which look over across the creek. 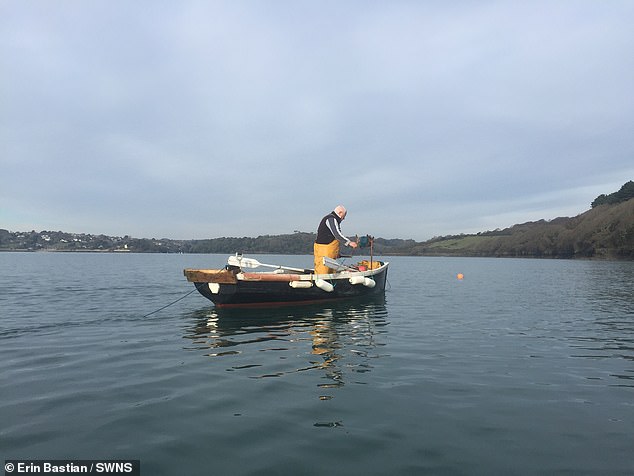 Mr Bastian on his boat before it was vandalised. He has strong suspicions who the boat vandal is after hearing about other locals and their encounters with a second home owner

‘I guess the boat’s mast would have been in the view of one of those.

‘This is all speculation, but I can imagine that’s it – people are protective of their lands, views and beautiful massive second homes.

‘They’re not the people who think having working boats on the beach is a nice addition which adds character to their Cornish lifestyle.’

Erin thinks the vandalism was pre-meditated rather than a random attack because of the damage caused.

‘Either side of the boat you have a support leg – so when there is no water it sits upright,’ she added.

‘They are bolted on so someone had to physically remove them. It seemed strange – it was such calculated damage. 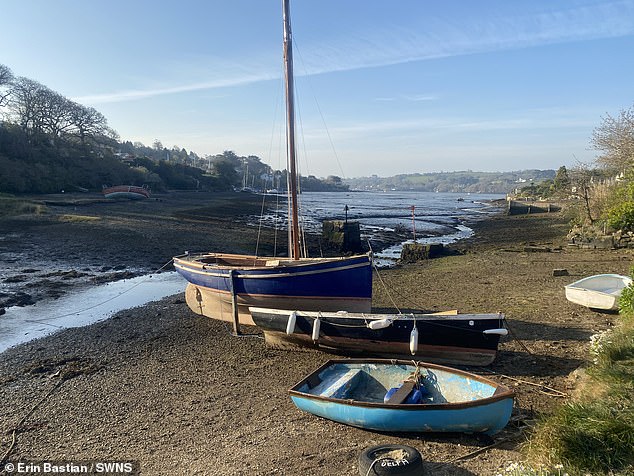 Erin thinks the vandalism was pre-meditated rather than a random attack because of the damage caused. Pictured, the boat before it was vandalised

‘They didn’t directly damage the boat – but did enough to it that the next high tide would have pretty much wiped the whole boat out.’

Erin says she was then brought to tears the following morning when she was sworn at and told to leave the village by a passer-by.

She had gone down to check on the boat’s condition in daylight and once again suspects the onslaught came from a second homeowner not local to the area.

‘The next morning I parked my van in the village to check the boat and this chap was extremely verbally abusive to me for no real reason,’ she said. ‘I wasn’t welcome, even when I told him I wasn’t a tourist.

‘I told him I was local and I was just checking my dad’s boat. He threatened to call the police on me for parking my van in a pubic council car park?

‘I have to admit his aggressive and unnecessary confrontation reduced me to tears.’

Erin said at the moment they don’t have any evidence to accuse anyone for the vandalism, but police are looking into the incident and Mr Bastian has been given a case number. 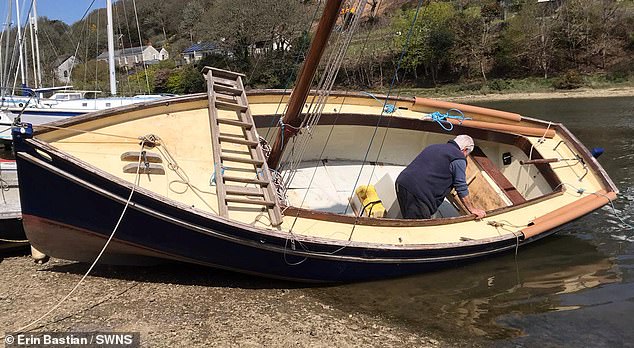 Erin says she was then brought to tears the following morning when she was sworn at and told to leave the village by a passer-by. Pictured, the vandalised boat as Mr Bastian works on it

‘I am mortified to see my dad’s livelihood vandalised,’ she added.

‘His boat without support legs has fallen over, leaving it vulnerable to being swamped by sea water, all because of someone’s appalling intentions to intimidate and threaten a local fisherman from using a public foreshore.

‘I find it shocking that a local person could do this to another – to actively damage another’s livelihood so callously in such a calculated manner.’

Erin and her father will now be moving their boat to another mooring to avoid the same thing happening again.

She added: ‘I find it upsetting that there’s a friction between local people trying to make a living, who have grown up in the area, and people who buy nice houses and move In from somewhere else. 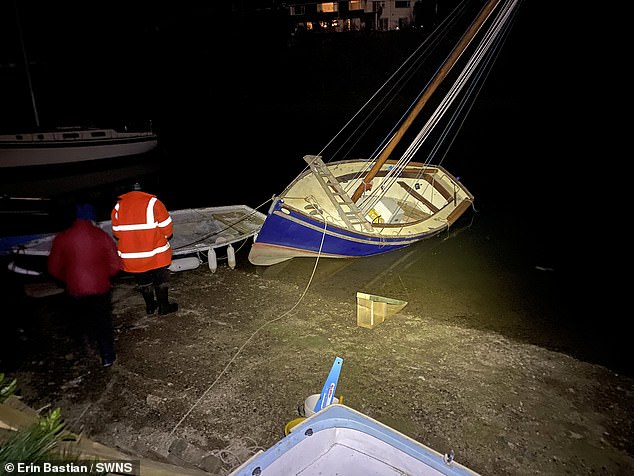 ‘They have different expectations of a place.

‘Everybody’s entitled to live wherever they want- but it upsets me how you can move to an area and try to change it – rather than embracing how it is, how it works and how the local people are.’

‘I feel people need to know the problems that do occur between local fisherman trying to make a living and giant house owners.’

A statement from Devon and Cornwall Police said: ‘We received a report that a fishing boat was damaged at a beach at Penpol Creek, Feock, sometime between 6pm on Wednesday 21 April and noon on Thursday 22 April.

‘The vessel’s owner found it on its side after its leg had been removed. Anyone with information is asked to call police on 101, or email [email protected], quoting crime reference CR/032137/21.’