‘We’ll get through it’: Hunt urges calm

Health Minister Greg Hunt has reassured Australians, saying the country with get through the vaccination program despite the unexpected AstraZeneca setback on Thursday.

“Nobody has ever said that it would all be on one day that this is a program through the course of the year,” Mr Hunt told ABC radio.“That’s a reality in a world of a global pandemic, with immense, immense international competition.

“Against that background, we have secured one of the higher rates in the world for vaccine availability.”

The government’s plan to vaccinate the entire population by October is now in doubt as authorities review Australia’s vaccine portfolio with the entire rollout now requiring an overhaul.

“We’ll get through it, we’ll protect everybody, and the programme continues,” Mr Hunt said. “There will be some adjustments, but we’ll keep Australians safe, and we’ll get them vaccinated.”

Health Minister Greg Hunt has rejected the suggestion that the federal government’s strategy on vaccine acquisition was too reliant on the rollout of the AstraZeneca jab.

Mr Hunt said decisions on which vaccine to acquire was driven by medical advice.

The government is now reviewing Australia’s vaccine portfolio as the entire rollout will require an overhaul, putting the government’s plan to vaccinate the entire population by October in doubt.

Mr Hunt said the government was working on how changes to the rollout would impact October commitment to have Australians vaccinated.

“So we are going to work through that over the coming days and weeks the aged care vaccination program will continue to receive the Pfizer vaccine until medical advisors suggest otherwise,” Mr Hunt said.

The development came as it emerged yesterday that Victoria had been dipping into its back-up vaccine supply to ensure people who had appointments were not being turned away as Commonwealth deliveries arrived consistently late.

Health Minister Greg Hunt has defended the decision to make Pfizer the preferred vaccine for people aged under 50.

“I think the only possible course of action that any responsible government can take,” Mr Hunt said on Friday morning. 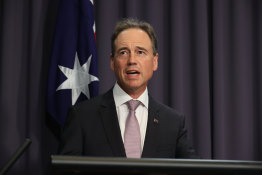 “What we have done is follow the medical advice in Australia.

“At different times other countries had not recommended border closures, but our medical advice recommended that and that has made a profound difference.

“Pfizer is now the preferred vaccine for people aged under 50 after Australia’s medical experts held a lengthy meeting on Thursday to discuss a rare but serious blood clotting side effect linked to the AstraZeneca vaccine.

The government is now reviewing Australia’s vaccine portfolio as the entire rollout will require an overhaul.

“It is a challenge, and it’s a global challenge,” Mr Hunt said.

The company manufacturing the AstraZeneca vaccine in Australia is showing little interest in changing its plans to produce 50 million doses, as the federal government moves to minimise the fallout from a decision to not offer the jab to most people aged under 50.

A panel of medical experts on Thursday night concluded Pfizer should be the preferred vaccine for under-50s given concerns the AstraZeneca product may cause a rare but serious blood clotting.

Read the full story by europe correspondent for The Sydney Morning Herald and The Age Bevan Shields here.

Opinion: AstraZeneca setback will have dramatic consequences on our daily lives

If you weren’t yet willing to concede Australia’s vaccine rollout was a disaster at lunchtime on Thursday, then by dinner time there was little room for debate.

Already three million jabs behind where the nation was supposed to be eight days ago, the decision by health authorities to advise against the use of the AstraZeneca vaccine for Australians under 50 is calamitous. 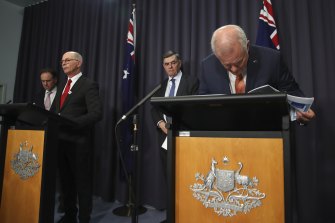 (From left) Greg Hunt, Professor Paul Kelly and Professor Brendan Murphy with Prime Minister Scott Morrison, who is taking a closer look at his notes during a press conference on Thursday night.Credit:Alex Ellinghausen

Unless the federal government can source millions of extra Pfizer doses from overseas within months, it is unlikely the nation will meet the October deadline of all Australians having received at least one dose. November or December may well be even too optimistic.

Prime Minister Scott Morrison was rather ashen-faced as he delivered the news to the nation a bit after 7pm. One can assume he was expecting medical experts to tell him the vaccine would be, like Britain, ruled out only for those under 30. That would have brought about a course correction but not one so dramatic as what now lies ahead.

Read more: AstraZeneca setback will have dramatic consequences on our daily lives

Good morning and welcome to our live blog. Australia’s vaccine rollout is in disarray after experts said under-50s will not be given the AstraZeneca jab due to a possible link with rare blood clots.

Pfizer is now the preferred vaccine for people under 50 after medical experts held a lengthy meeting to discuss a rare but serious clotting side effect linked to AstraZeneca. 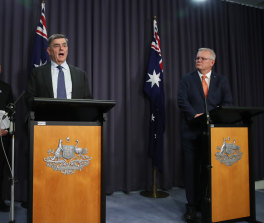 The PM at the press conference announcing the vaccine changes Credit:The announcement was made on Thursday night.

The government is now reviewing Australia’s vaccine portfolio as the entire rollout will require an overhaul, putting the government’s plan to vaccinate the entire population by October in doubt.

National cabinet will have discussions about the reopening of Australia when it meets on Friday, in light of the new advice.

We will bring you updates about this meeting and more throughout the day.

Iran starts enriching uranium to 60%, its highest level ever – The Denver Post