Protesters backed by Extinction Rebellion (XR) who built a makeshift home from pallets to oppose a £1.4billion housing project have been warned by a London council they will take action.

The group have occupied York Gardens, in Battersea, south London, and aim to stop a joint venture between developers Taylor Wimpey and Wandsworth Council.

The overall programme, which has been worked on since the early 2010s, includes the demolition of 720 council homes where some live in cramped and overcrowded conditions.

They will be replaced by 2,550 new homes, including for existing secure tenants and resident homeowners.

It also includes the planting of 450 trees and a public park.

But the eco-activists are demanding the construction be moved to an area of brown land nearby, where an old building – Pennethorne House, is to be demolished.

A sign which reads ‘dare to care, protect the planet, respect the future’ has been displayed on the side of a pallet structure covered in tarpaulin.

Mother-of-one Emma Buckley, 50, who is organising the protest, said: ‘We are asking them to protect the woodland so that it acts as a carbon capture buffer.

‘We want trees and homes, because it takes too long for the sampling’s to grow and do the job of these mature trees.

‘The sooner you start to listen to people in your borough, the better you will sleep at night.’ 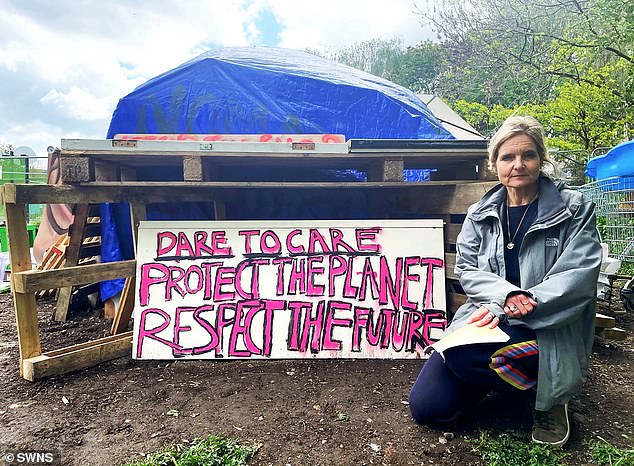 Emma Buckley, 50, organised the protest in Battersea, south east London, and was backed by XR

Ella, 19, from Brighton who sleeps at the camp four nights a week while studying for her degree in Environmental Science said: ‘This is a tree protection camp, because if you have a structure, you have more rights over the land and it’s harder to evict people.

‘We’ve had a lot of people on site helping us and it’s been a really cool learning opportunity for me. They’ve officially said they are going to cut down 124, but we’ve counted how many they need to get rid of and it’s 413.

‘We’re not part of Extinction Rebellion, but they’ve helped us and we have access to support, because we’re all interconnected. I’m here as an individual, because I care about the environment, that’s the more important thing.

‘I know I’m only a small piece of the jigsaw because these things don’t normally go well, so I’m just trying to stand on the right side of it.’

Lawrence Umoru, 26, whose front window looks out onto the gardens and protester’s camp, said: ‘It’s a nice place to take the kids down to the park.

‘Taking it away would limit the possibility of getting them outside in the fresh air. Battersea Park is a bit further up. It’s a bit of a walk, and we’ve got a month old baby, so being able to walk around the corner helps this community a lot. 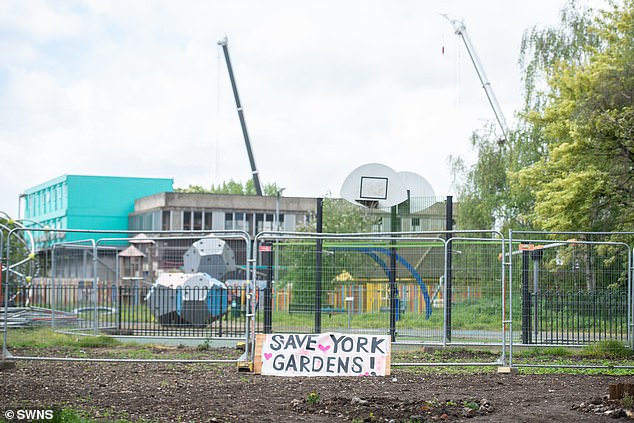 One of the protesters’ signs in York Gardens, left by demonstrators opposed to the new builds

‘I didn’t know what that wooden thing out there was, but I can understand why they are protesting. It’s a real benefit for me and my family. They haven’t made any noise and haven’t been a problem at all to be honest. I don’t know how this new building is going to benefit our community.’

Elle St John, 70, a retired teacher whose front windows overlooks the park said: ‘I think it would be really nice if they manage to stop it, but I don’t know how it’s going to end.

‘We don’t have many gardens like that – the nearest is probably Battersea Park, but it’s too far away.

‘It’s funny to see all those things and it would be nice if it wasn’t there, but I understand what they are doing there.’

Sue Miles, 56, a makeup artist who is currently unemployed said: ‘There was a 400-year-old tree on the other side of the park which they tore down a few weeks ago.

‘To stop them, the protesters were sleeping the tree, but they cut off their food and there was a big police presence, so they got them in the end.’

A spokesman for Wandsworth Council told MailOnline it would take action to keep the development going. 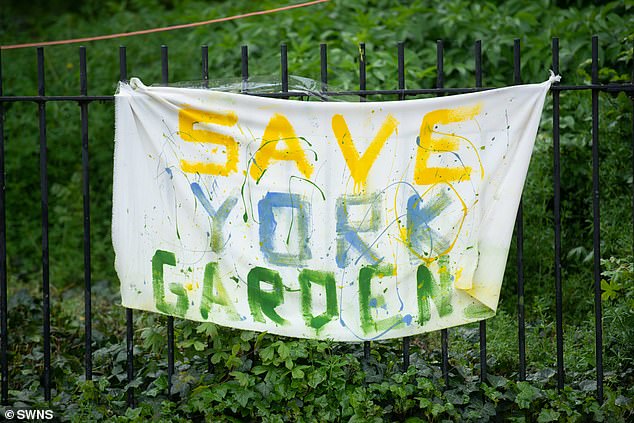 ‘These protesters are obstructing the start of work to build 136 new council-owned social rent homes for local residents on low incomes and in housing need, especially those currently living in cramped and overcrowded conditions.

‘Alongside these additional council homes we are planting around 450 new trees on the estate and providing a new 2.5 hectare public park so that residents have newly created green outdoor space to enjoy.

‘To ensure Wandsworth remains one of London’s leafiest and greenest boroughs we constantly plant new trees. Over the past three years we have planted more than 1,200 in our streets and parks and during this winter planting season another 750 have been added.

‘Overall we look after more than 50,000 trees in our streets and open spaces. We take these important responsibilities seriously and will only agree to a tree being lost if there is no alternative and only if a greater number are planted as replacements.’