Waste giant Cleanaway will apply to start processing asbestos at its Ravenhall tip in Melbourne’s west, prompting opposition from two councils that say the move is another example of the western suburbs being used as a dumping ground.

Cleanaway said its proposed expansion would help address a rising problem in the city’s outer suburbs: the illegal dumping of waste, including asbestos, by roadsides. 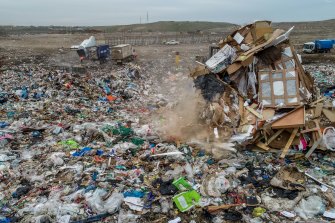 Waste giant Cleanaway wants to expand its licence to process asbestos at the Ravenhall tip.Credit:Joe Armao

The $6 billion company’s asbestos plans, yet to be publicly announced, threaten to rehash a months-long battle led by councils and residents against Cleanaway’s pitch to accept toxic soil from the West Gate Tunnel project. A tip in Bulla, north-west of Melbourne, was ultimately chosen earlier this year.

A Cleanaway internal briefing document says it will apply to Victoria’s Environment Protection Authority to dispose of asbestos at a dedicated area of the 229-hectare Ravenhall tip – Melbourne’s largest tip at almost 1.5 times the size of the CBD’s 160-hectare Hoddle grid.

Ravenhall sits in the Melton City Council area, whose mayor Goran Kesic told The Age he was made aware of the proposal late last week.

“We’re extremely disappointed that Cleanaway is again proposing to dump more toxic waste at this site,” he said. 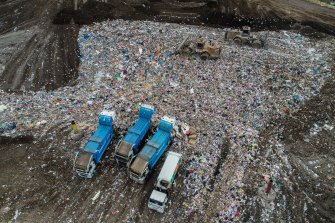 “Ravenhall is not an appropriate location to dump and process any toxic materials, nor is any area where families live and work.”

While the nearest existing suburbs include Derrimut, Caroline Springs and Burnside more than a kilometre away, the rapidly expanding area will house new suburbs such as Mount Atkinson with a projected 22,000 residents in coming years.

Cr Kesic called on Cleanaway to clearly communicate its plans to the community and for the environment authority to thoroughly scrutinise the safety of the waste giant’s asbestos plans.

“We strongly hope that the EPA will assess this application rigorously,” he said.

Asbestos is currently processed at 27 landfills in Victoria, including five in metropolitan areas and 22 in the regions.

A Victorian government report earlier this year found the state would benefit from more asbestos-disposal facilities.

Following a significant rise in the landfill levy, disposal companies are increasingly avoiding tips and illegally dumping soil, forcing councils on Melbourne’s fringe to spend hundreds of thousands of dollars in clean-up fees.

Yet councils are also wary of landfill activities expanding and intensifying in their areas. 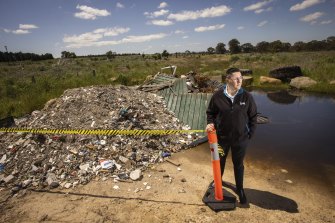 An example of illegally dumped waste on Melbourne’s fringe, in this case in the northern suburb of Craigieburn.Credit:Paul Jeffers

Brimbank mayor Ranka Rasic, whose council area is adjacent to Ravenhall, said Cleanaway’s plans would affect the health and wellbeing of her community and the environment.

“For too long Melbourne’s west, and particularly Brimbank, has borne the brunt of absorbing the state’s waste, contamination, pollution, landfill and traffic needs,” she said.

A Cleanaway spokesman said its Ravenhall tip was a “highly engineered and intensely regulated operation” and its asbestos management plan would include commitments to employ trained operators and inspect waste before it enters the tip.

“As the leader in waste management, Cleanaway has the expertise to safely receive and handle asbestos waste to protect our environment and surrounding communities,” he said.

The impact of short-term exposure to asbestos is generally limited, but prolonged direct contact can cause lung damage and lung cancer in severe cases.

Cleanaway had planned two information webinars but, following complaints from a community advisory group, has expanded the consultation process to five sessions starting this month. It will also distribute letters to 45,000 households across 23 suburbs.

“Councils like Melton and Brimbank can’t whinge about Cleanaway’s waste practices and then continue to do business with them,” he said. “If these councils were serious, they would tear up their contract with Cleanaway on behalf of ratepayers outraged by the biggest tip in the west and look to alternative options like the Wyndham landfill facility.”

Cleanaway has regularly expanded its Ravenhall operations in recent years, most notably in 2017 when it proposed to triple its size to 450 hectares, which would have made it the world’s largest tip.

The plans were curtailed by Planning Minister Richard Wynne, who allowed a 96-hectare expansion to 229 hectares.