A wealthy car dealership boss and his wife who ripped apart their 16th century mansion after buying it for almost £3.5 million are facing a bill of £60,000 for ignoring its Grade II listing.

Leroy Bangs, 58, and wife Wendy, 61, were convicted of preservation order breaches relating to the sprawling house in Waltham St Lawrence, Berkshire, after a neighbour tipped off the council to building works going on.

Wooden frames dating back 500 years had been torn out and modern Perspex was used in windows at the ancient home, which has been Grade II listed since 1955.

Heritage experts from the Royal Borough of Windsor and Maidenhead Council visited the home, and their discoveries triggered a three year prosecution case which ended this week at Reading Crown Court.

The court heard that after buying the five-bedroom property in March 2017 with a mortgage of more than £5,000 a month, the Bangs set about modernising and renovating it to their own tastes.

Leroy, who runs a plush Bentley, Porsche and Rolls Royce car dealership, and his wife Wendy, who is listed as the company secretary of their business, Marlow Cars Ltd, stood in the dock together and admitted ignoring the regulations set in place to ensure the historic house remained preserved. 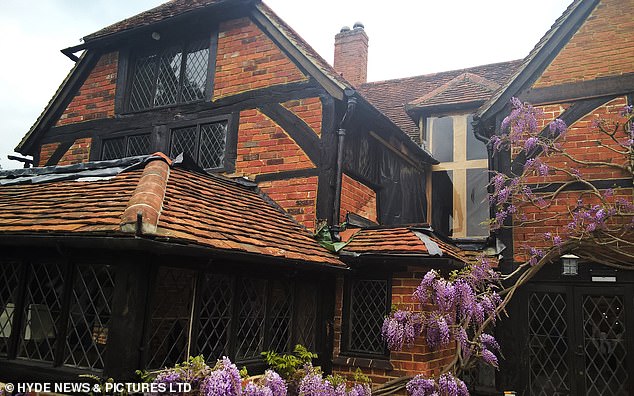 Leroy Bangs, 58, and wife Wendy, 61, were convicted of preservation order breaches relating to the sprawling house in Waltham St Lawrence, Berkshire, after a neighbour tipped off the council to building works going on 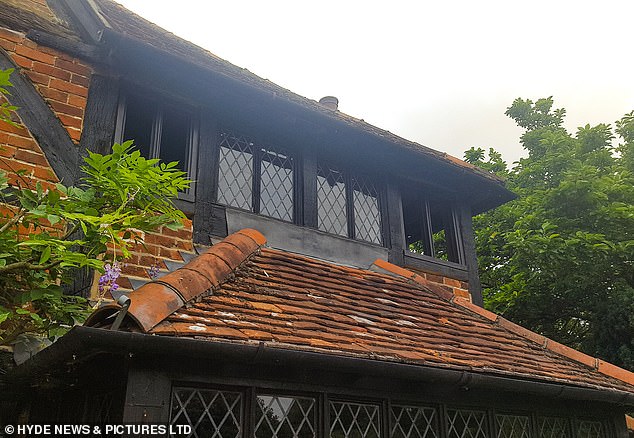 Wooden frames dating back 500 years had been torn out and modern Perspex was used in windows at the ancient home, which has been Grade II listed since 1955 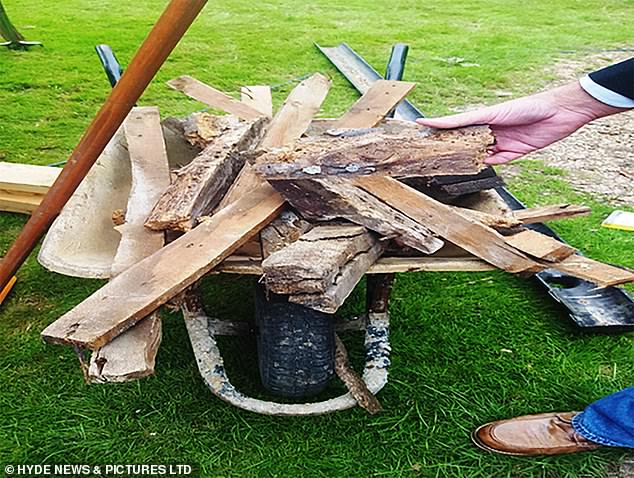 Pictured: 16th century wood removed from the house. Judge Sarah Campbell fined each of them £15,000 and ordered that they should also pay council costs of more than £29,000. She said that the fine would have been larger had the building not been a private residence and therefore not open to the public

Judge Sarah Campbell fined each of them £15,000 and ordered that they should also pay council costs of more than £29,000. She said that the fine would have been larger had the building not been a private residence and therefore not open to the public.

WHEN CAN YOU ALTER A LISTED PROPERTY LEGALLY?

Homeowners need listed building consent for all work done to a listed building involving alterations, extensions or demolition – and that affects its character as a building of significance.

Work done without the proper permission is a criminal offence.

Those wanting to alter or extend listed buildings in a way that affects its character have to apply for listed building consent from the local planning authority.

Local conservation officers can help property owners discover if consent is needed for their alteration plans, and outline what is and is not acceptable.

When planning authorities consider whether they should grant or refuse an application, it will pay particular attention to the importance of preserving the building, along with the features that made it worthy of being listed.

Planning authorities can demand that all work carried out without the proper permission is reversed, highlighting the importance of discussing plans before carrying out any alterations.

Another hurdle for those altering listed properties without consent could be reselling it.

During their renovations of Old Gunsbrook House it was said the couple removed at least one historic chimney stack from the dining room fireplace, created new openings in the structure for extra windows, removed 16th century timber from the bedroom and bathroom to make a wider doorway and changed the level of the roof.

The house, standing in acres of land with four bathrooms, is secluded from public view and is set at the end of a private road.

In court, the couple said nothing to the judge during the two-hour long prosecution case. They were represented by barrister Giles Atkinson, who specialises in complex planning cases.

Judge Campbell was told that when the couple purchased their home, they were made aware of the property’s Grade II status.

A Grade II listing prohibits certain aspects of a property from being altered, in order to maintain its historic structure and integrity.

The Bangs were charged by the council with executing a demolition/alteration/extension of a building which affected its listed character and the court heard that they not obtained any approval from the borough council as planning authority.

Prosecuting on behalf of the council, Alison Lambert recounted 10 offences committed by the couple. Seven were originally found upon initial inspection and a further three discovered February 19 2019 after another site visit to the property.

Councillor David Coppinger, lead member for planning at the Windsor and Maidenhead local authority said: ‘This was a blatant breach of planning rules that saw a Grade II listed building altered without the owners paying attention to the proper process and I’m delighted with the outcome of the case.

‘I am particularly pleased for the council’s enforcement and conservation team who have spent more than three years working on this case and I pay tribute to their hard work in bringing it to court. The court also ordered that all our costs be paid.

‘We will take all necessary steps to protect the borough’s historic and listed buildings and do everything we can to hold those who flout the rules of our planning system to account.’ 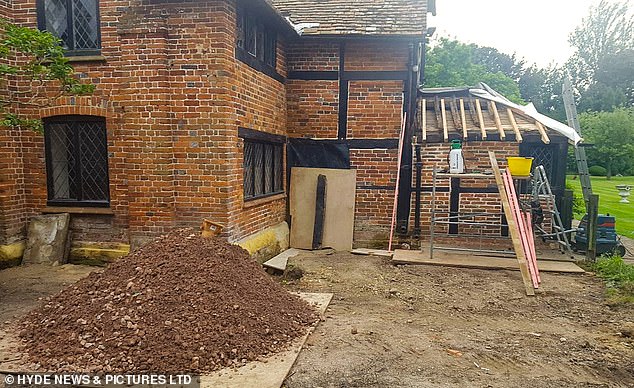 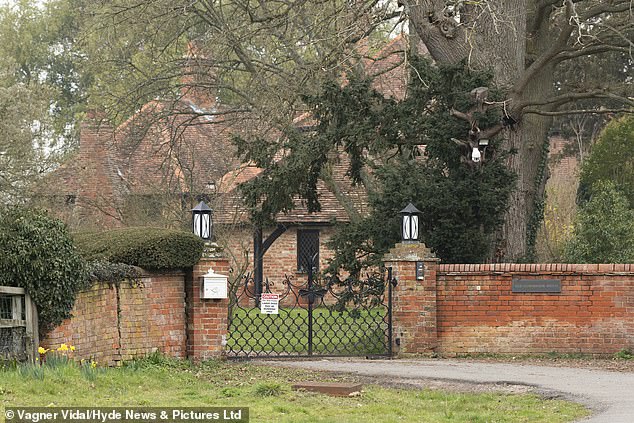 Judge Campbell was told that when the couple purchased their home, they were made aware of the property’s Grade II status

Judge Campbell heard that after being tipped off to the breaches, council officials made an inspection on August 2 2017 where it was found that renovations had already begun and aspects of historical importance had been altered.

The next day, the couple were given orders which prevented them from further renovations to their property unless approval was given by the council and work ceased that afternoon.

Miss Lambert outlined the changes made to the property before the first inspection, which included many insertions of new windows around the property, as well as the removal of chimney stacks in the dining room and changes to the roof.

After undertakings to halt work were given, the couple inserted Perspex in the windows and finished the window fittings, blatantly ignoring instructions to the contrary from the council.

In an interview on October 4 2017 Leroy Bangs claimed that it was his wife who had been involved in the home renovations.

Despite being told when they purchased the house that it was a Grade II listed property, Mrs Bangs said in her interview on October 25 2017 that she should have inquired with conservation officers before she began work, to make sure everything was done in the right way. 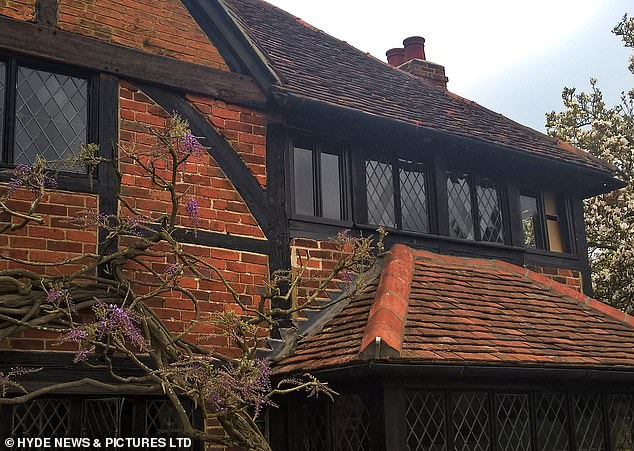 Prosecuting on behalf of the council, Alison Lambert recounted 10 offences committed by the couple. Seven were originally found upon initial inspection and a further three discovered February 19 2019 after another site visit to the property

Defence counsel Mr Atkinson, argued that the removal of timber from the roof was due to water damage and on further inspection some timber was rotten but he conceded that too much was removed to qualify it to have been necessary without approval.

The couple also removed beams and widened the doorway from a bedroom to provide better access to the bathroom, the court was told.

An electrician who visited the property in April 2017, said that he would have had to stoop to have access the bathroom, before changes were made.

Sarah Harper, a heritage specialist employed by the council, told the court that the area of the house where the doorway was altered affected the historic integrity of the building and dated back to the 16th century.

Ms Harper added that the removal of the chimney stack in the main hall was of historic importance as the hall also dated back to the 16th century.

She noted that many changes made had resulted in the loss of the historic fabric of the property and had a serious impact on the architecture.

The court was told that changes made to the house had cost the couple around £100,000 and were completed to a high standard.

The Bangs had sold another property and part of their garden which gave them a total of £260,000 to help with their renovation costs.

On November 21 2017 another site inspection was undertaken, where it was believed further work had been carried out to the property and that previous instructions had been ignored by the couple.

Judge Campbell said that she believed the couple did not make the renovations to their home in a malicious attempt to damage a historic property but to create their dream family home and she understood the changes did not affect the public interest of the property.

‘There are no public benefits to the changes as they do not have access, therefore the public interest does not outweigh the changes,’ she said. However, the court heard that changes to the roof had seriously affected the character of the property.

Despite Ms Harper stating that much of the work done was irreversible and could not be undone, it was understood that the Bangs had since tried to reverse some of the changes in order restore the historic fabric of the house to the best of their ability.

Judge Campbell acknowledged however: ‘An inspection by the council has not been able to take place to see if work has been carried out, due to Covid.’

The couple said nothing as they left the court.

One neighbour who asked not to be identified said: ‘The neighbours have had many encounters with the Bangs and none have been pleasant, they are usually about situations the Bangs feel are problems among the properties.

‘He is a businessman who is fixated on financial goals. They have Bentleys and other cars constantly driving up the shared driveway.’