Covid cases on the up in holiday hotspots Cornwall, Devon and Brighton, expert warns

COVID cases are up in holiday hotspots ahead of the summer holiday break.

Cornwall, Devon, Brighton and Bournemouth are seeing an influx of infections, one of the UK’s largest Covid study has found. 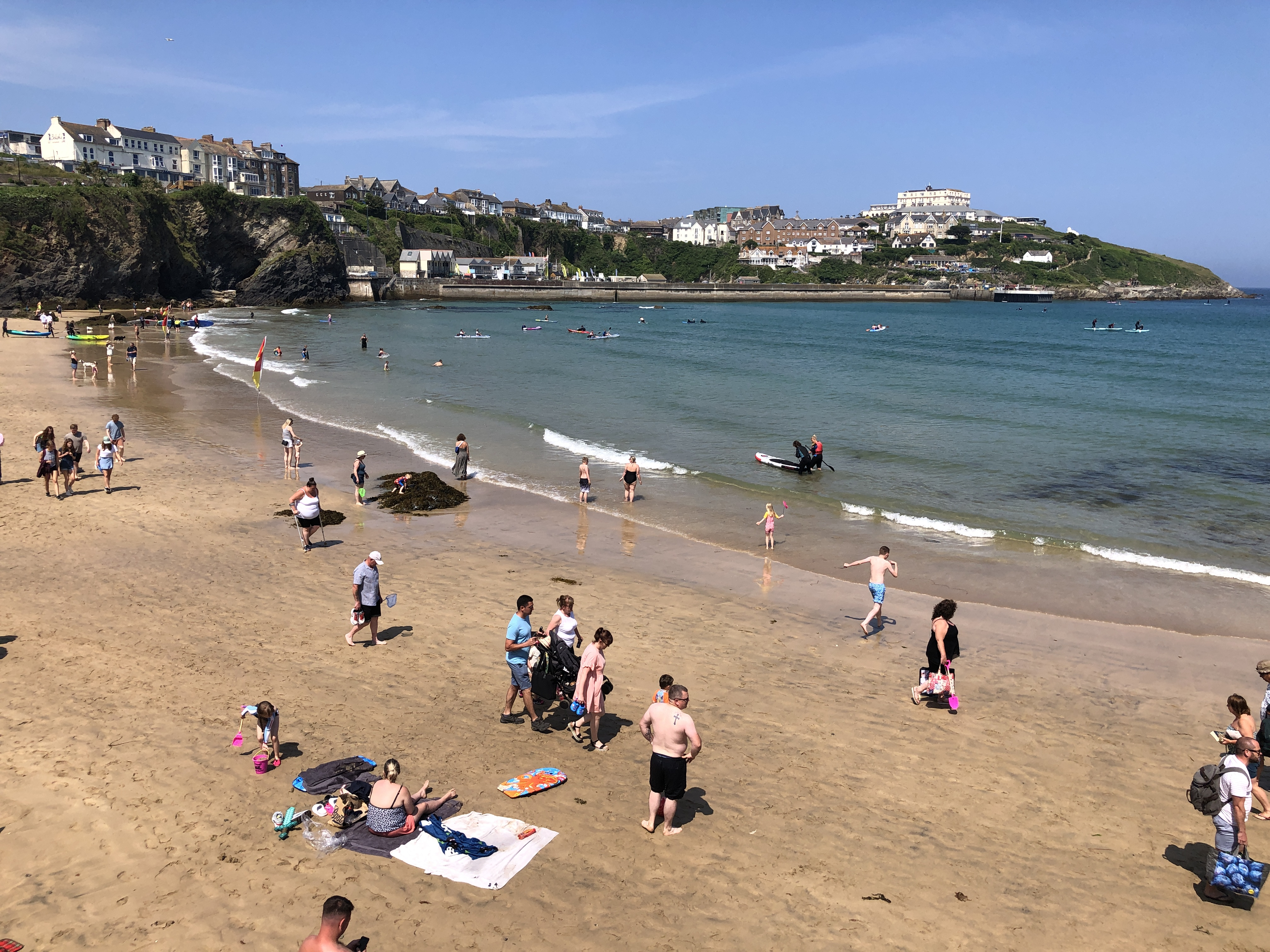 The ZOE Covid Symptom Study estimates the prevalence and new cases per day based on millions of app users.

Tim Spector OBE, lead scientist on the study, from King’s College London, said: “Cases continue to increase in holiday hotspots like Cornwall, Devon and along the South Coast in Brighton and Bournemouth.

“With the summer holidays approaching, we need to remain extra vigilant and avoid unnecessary risks.”

Prof Spector also warned Euro 2020 has the potential to “spread the virus among tens of thousands of fans”.

It comes after public health chiefs revealed 2,000 people from Scotland travelled to London while infected with Covid.

“I think because of these factors we’ll continue to see high rates for longer than expected,” Prof Spector warned. 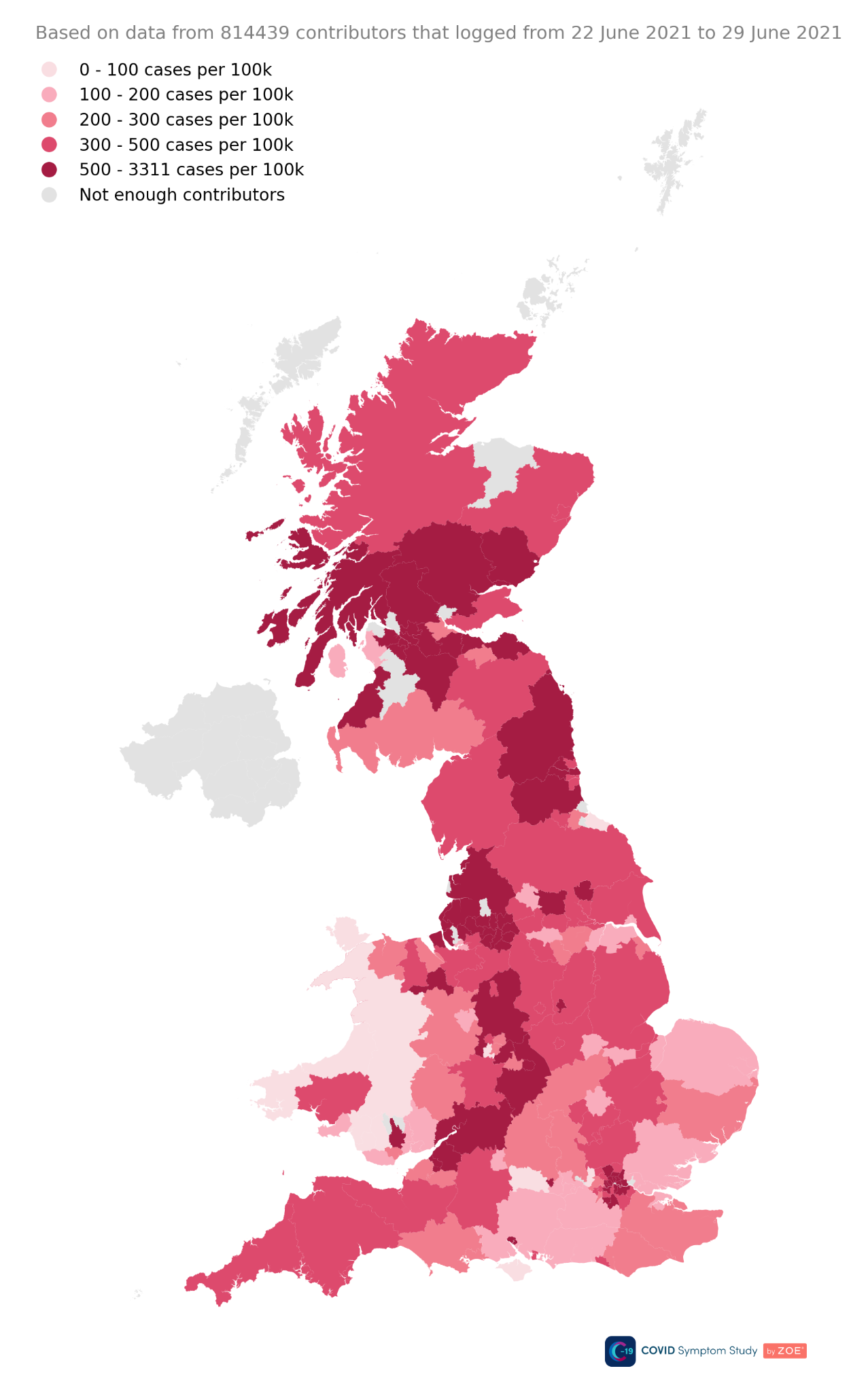 Data from Public Health England also shows that cases have risen in vacation destinations, along with the vast majority of the country.

Phélim Mac Cafferty, Hove City Council, said there was “so much at stake” to drive cases down “so our city can continue to welcome visitors”.

The figure is more than 30-fold from the start of June, when there were around five cases per 100,000 people.

Cornwall’s case rate went over the national average in the third week of June for the first time in the whole pandemic.

The university town of Falmouth is the most affected currently, according to the Government dashboard with 585.9 cases per 100,000.

Sunny Cornwall has surged in popularity as a UK staycation spot amid bans on international travel, already a favourite for millions of Brits.

Prof Spector has previously said the G7 summit, holidaymakers over half term and a population with low prior infection are likely to have contributed to the new wave in Cornwall.

Faced with criticism that the G7 summit, held on 11–13 June, could have been to blame for a surge in case numbers, a PM spokesperson said: “We are confident that there were no cases of transmission to the local residents.

“All attendees were tested, everyone involved in the G7 work were also tested during their work on the summit.”

Cornwall Council also said there was "no evidence to connect the rise in case numbers to the G7 summit".

The ZOE study reported this week an estimated 19,228 unvaccinated people are catching coronavirus each day, up 27 per cent from 15,099 last week.

There are currently 5,982 new daily symptomatic cases in partly or fully vaccinated people in the UK, an increase of 49 per cent.

Vaccines are highly effective but cannot prevent all cases of the disease.

Around one in 205 people are currently infected. 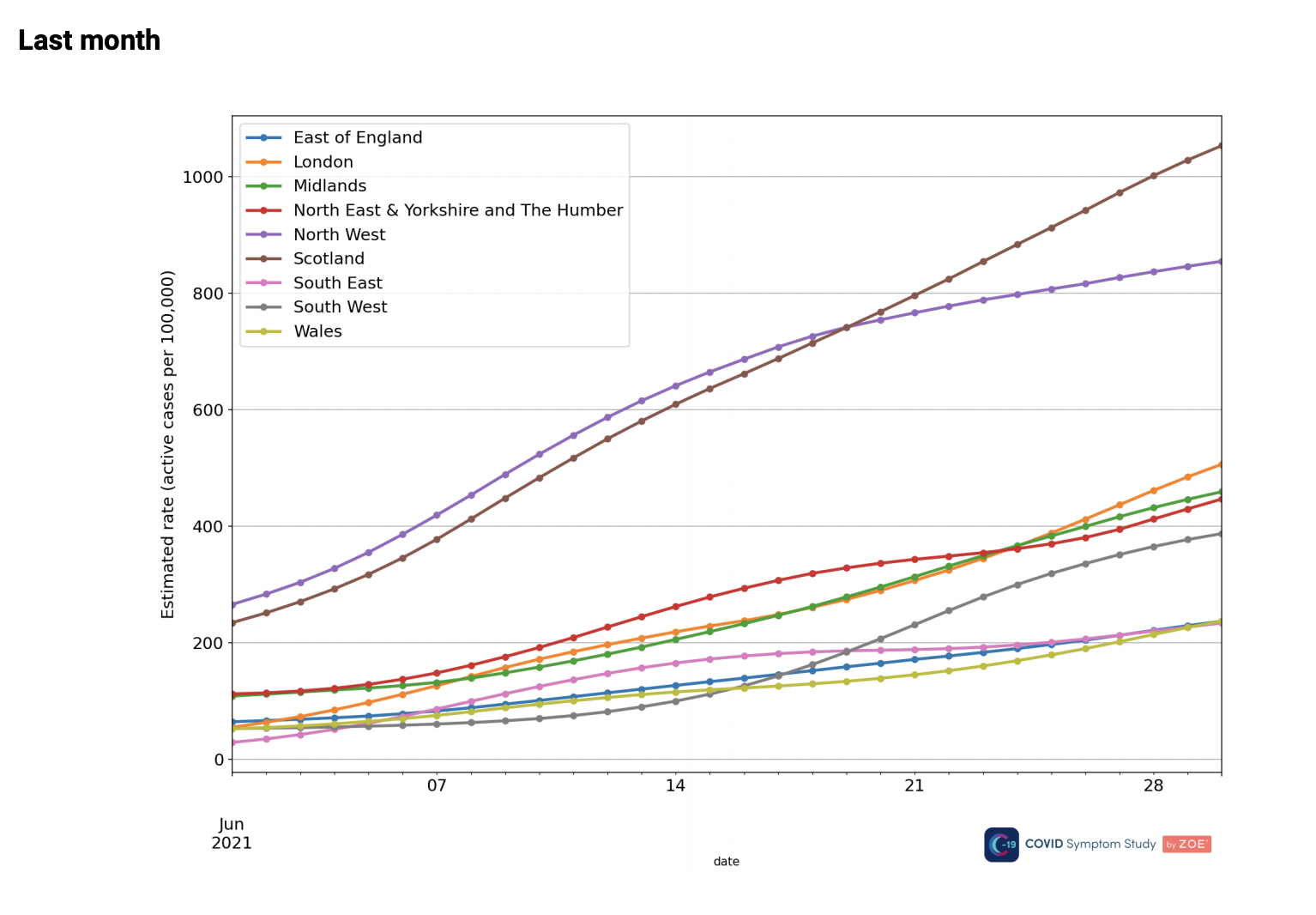 Dundee and Aberdeen in Scotland have the highest rates of prevalence, with 2,873 and 2,045 people per 100,000 infected right now in each area respectively.

But the study says the Delta variant is making its way from the west of England, where it has caused an explosion of hotspots, to the east.

Cases are “leveling off” in the West Midlands and South West. But they are rising in the North East, London and the East Midlands.

Prof Spector said the North West and West Midlands may have passed their third wave peak now because that’s “where the Delta variant got an early foothold”.

He said: “But the rate of change is now going up in the east of the country. Places like the East Midlands, Aberdeen, the North East and NE London are seeing the highest rates of change, and I expect them to follow what we’ve seen in the North West over the next few weeks.

“While rates of Covid infection are high, it’s reassuring to see vaccinations protecting the vulnerable as hospitalisations and deaths remain very low.”

ZOE COVID Study data has shown that in vaccinated people, symptoms are more mild and are similar to those of a bad cold.

The most common are a runny nose, headache and a sore throat.

Sneezing has also emerged as a symptom among partially and fully vaccinated people, the study has previously shown.

“Cases are being missed and increasing the spread because people are unaware and unlike other countries, it doesn't feature in government lists”, Prof Spector warns.

“So it’s crucial that we all recognise cold-like symptoms as possible Covid and get tested.

“While Covid doesn’t kill in the numbers it once did, it’s still a dangerous and unpredictable disease that can leave people with long lasting symptoms.”

It comes after scientists said sore throats, muscle aches and runny noses should be listed as official Covid symptoms urgently.

Experts led by University College London are calling for a longer list of symptoms which could include sniffles, tiredness, chills and diarrhoea.

Up to half of people don’t get the classic cough, fever or lost sense of smell so they can’t get a test, meaning they slip through the net and spread the virus.