We all know that parties are illegal during lockdown, but one super-rich Londoner has discovered that even Zoom celebrations online can lead to frightening repercussions.

He planned for Miss Tchenguiz to enter his company’s offices in Park Lane, Mayfair, and be presented with dozens of screens on which 70 of her best friends would greet her online. 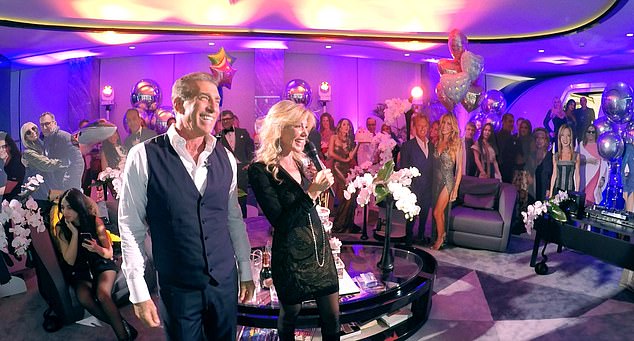 To mark the 56th birthday of socialite Lisa Tchenguiz, her boyfriend, the American private jet tycoon Steve Varsano, 64, thoughtfully organised a surprise online party. They are pictured above with the cut-outs

To add to the amusement, he ordered 70 cardboard cut-outs with images of each of the guests to be placed around the room.

However, while workmen were organising the elaborate set-up, a passer-by saw what was going on from outside the building and called the police – apparently convinced that a big party was being prepared.

The tip-off is thought to have come from a passenger on the upper deck of a bus travelling down Park Lane who could see into the building.

To Mr Varsano’s horror, his offices were then visited by not one, not two, but almost a dozen Metropolitan Police officers, arriving in multiple vehicles. 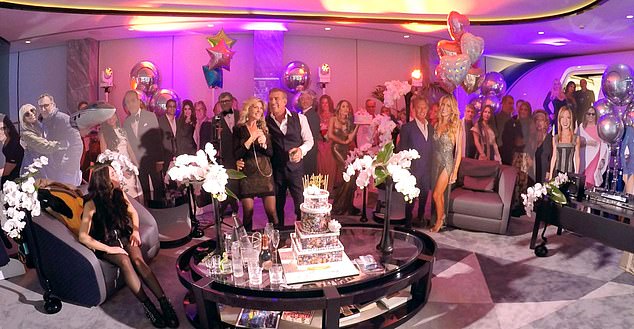 ‘There were about ten officers,’ he told the Daily Mail. He said they refused to believe the party was online-only and proceeded to search for guests hidden in the building.

‘They went to all the rooms in my offices like I was some criminal,’ he said.

‘Someone must have called and said I was having a party because they saw trucks delivering lights and balloons and images.

‘They quickly understood that it was not attended in real life by people but by 70 cardboard cut-outs and Zoom people. I had an operator for lights and he was behind a glass, had a mask and was doing social distancing.’

He added: ‘I went through unbelievable efforts to adhere to the rules. The police were surprised that there were no people that they could issue a fine to.’

However, they were apparently not fully convinced by his explanations because two officers returned later that evening to check the guests were really made of cardboard.

He said: ‘It was a little bit funny, but we had to take it seriously. They were very nice and realised there wasn’t anything illegal. They bid us farewell, but it was a bit alarming.’

Lisa, sister of property tycoons Vincent and Robert Tchenguiz, said: ‘The police didn’t dampen my spirits. They were kind enough to say hello to my friends. They were doing what they need to do.’

She added of her boyfriend’s efforts: ‘It was incredible. I saw these cut-outs and they looked so real and then I turned around and saw a screen of my friends from all over the world.’

A Scotland Yard spokesman said: ‘Police received six reports about a gathering of people at premises in Park Lane. Officers attended the premises. No further action was taken.’ 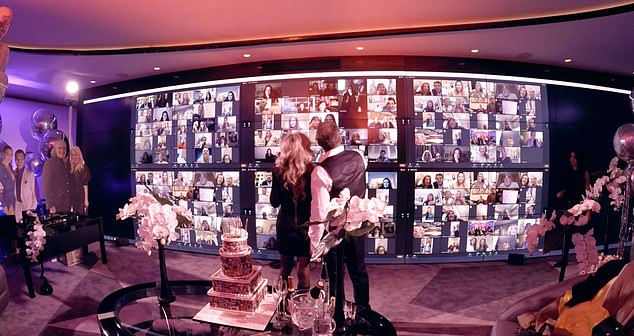 To Mr Varsano’s horror, his offices were then visited by not one, not two, but almost a dozen Metropolitan Police officers, arriving in multiple vehicles