CRACK British troops on the world’s most dangerous peacekeeping mission have told of their deadly battle with IS terrorists.

The squaddies were pinned down by fanatics firing more than 100 rounds from a heavy machine gun and assault rifle. 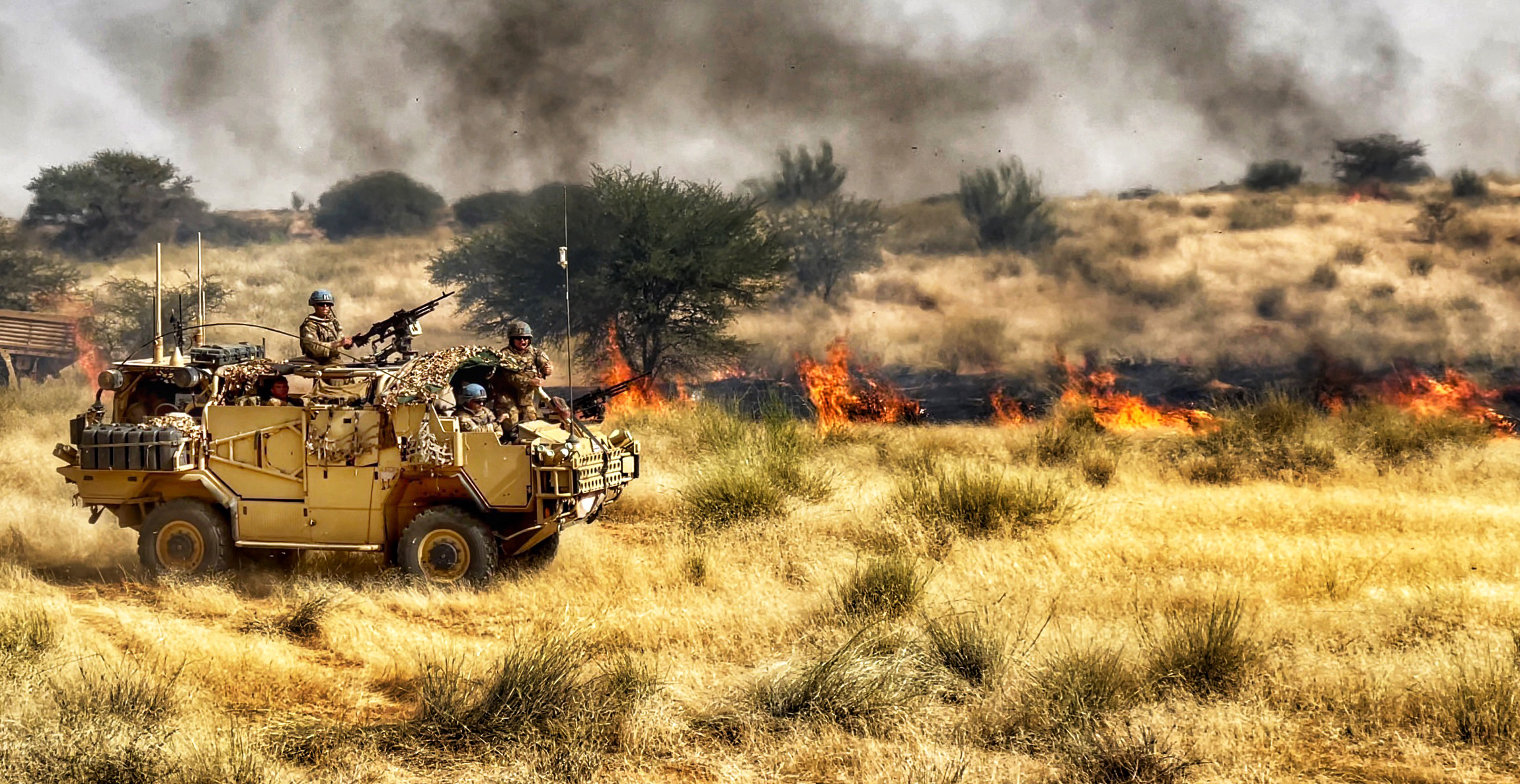 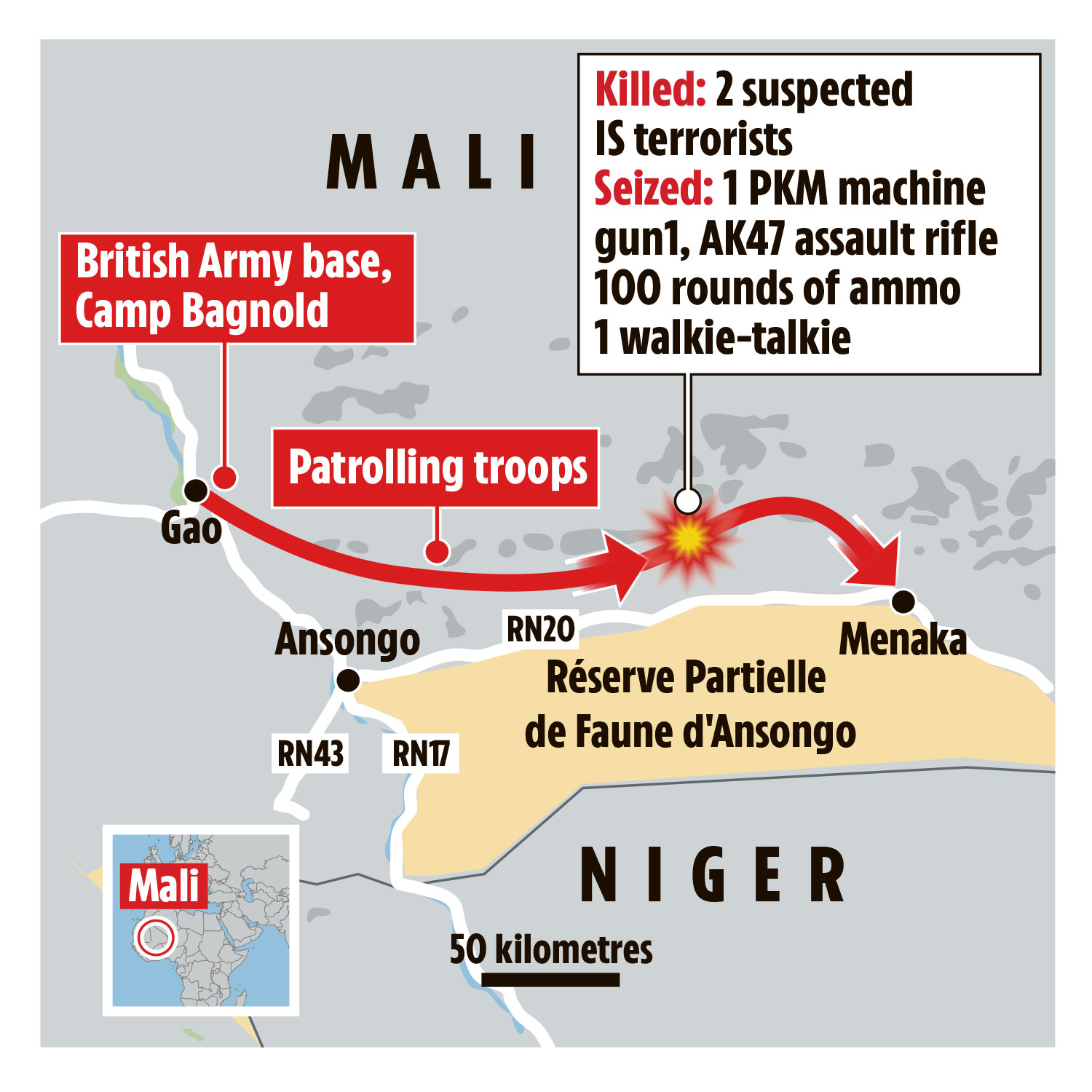 The Battle of Devil Dune in Mali, West Africa, was the first time our soldiers have fired shots in anger since the end of combat operations in Afghanistan in 2014.

This week the members of the Queen’s Dragoon Guards (QDG) told The Sun it was a miracle that they escaped unharmed.

L/Cpl Kevin Gething, 36, said of last month’s firefight, which left two IS militants dead: “To my left and my right I could see rounds splashing into the ground, inches away.”

One bullet slammed into the door of Trooper Kris Hoff’s Jackal armoured vehicle, leaving a dent in the bulletproof plating.

And Sgt Adam Humphreys, 30, an Afghan veteran, described the IS terrorists firing at his men from their position in thick bushes.

"It was a very hairy situation. How they did not get shot, I do not know.”

The troops were part of the UK’s Long Range Reconnaissance Group (LRRG), led by the Royal Anglian Regiment, on a mission to protect civilians by deterring and disrupting Mali’s numerous terror groups.

When The Sun joined their patrol — just days after the fierce battle — they had travelled more than 300 miles from their main base in Gao in a fleet of armed Jackal vehicles.

It was the longest desert patrol, in distance and duration, since the end of World War Two and fraught with dangers as one armoured car was destroyed in a bush fire.

But there was also some lighter moments as Trooper Sally Faulkner helped rescue a lost goat.

The war-torn region is plagued by attacks by IS in the Greater Sahara.
Fanatics have overrun Malian army camps.

In August they were blamed for murdering more than 50 people in a reprisal killing in the town of Outtagouna, where locals were suspected of supporting Mali’s armed forces.

'PUT YOURSELF IN HARM'S WAY'

At least 160 people were killed in a similar attack in June in neighbouring Burkina Faso, but no one claimed responsibility.

Lt Col Meddings said: “The idea that a UN peacekeeping mission is standing on a wall between armed groups is in the past.

"You have to be prepared to put yourself in harm’s way to protect civilians.”

It was just after 9am on Wednesday, October 20, when one of the patrol’s open-top Jackals crested a ridge in the desert, miles from the nearest road, and surprised two armed men on a motorbike.

They avoid using the roads because of the threat of improvised roadside bombs.

Lt Ed Dillon, 24, the troop commander, said: “They tried to escape on their motorbike but crashed and ran off into a wooded block.”

The troops gave chase in a fleet of Jackals armed with 40mm GMG grenade launchers, GPMG machine guns and other weapons.

Under UN rules they could question the gunmen to see if they were members of one of Mali’s dozen or so legal militias.

L/Cpl Gething said: “Our initial thought was are they from a signatory armed group. But that went away as soon as they ran away from us.”

Captain Bertie Lewis, 29, a QDG troop commander, said they had expected the militants to surrender, as on two previous patrols. But this time it was different.

As L/Cpl Gething and Trooper Sam Jones, 27, leapt out of their Jackal to continue the chase on foot, Sgt Humphreys raced ahead to cut the gunmen off.

He was watching his men walk slowly towards him through the scrub when the bushes convulsed with fire. Sgt Humphreys said: “I could see the grass shaking and smoke rising from their muzzles.

“I couldn’t see the terrorists. I could just see their two firing positions. It was a very hairy situation.

The gunmen, concealed in thick thornbushes, opened fire at L/Cpl Gething and Trooper Jones with a PKM machine gun and AK47 when the Brits were less than ten yards away in waist-high grass.

The pair dropped to the ground and returned fire with their SA80 rifles. But they were trapped under the hail of bullets, unable to move.

Sgt Humphreys ordered his driver into the fray until he was almost on top of the terrorists.

He was so close that he had to stand up in his seat to angle the machine gun low enough to fire.

Sgt Humphreys said: “I think it surprised them to have someone right on top of them.”

'I MOVED FASTER THAN I EVER HAVE IN MY LIFE'

The bursts of machine gun fire caused a lull which was just long enough for L/Cpl Gething and Trooper Jones to sprint back into cover.

L/Cpl Gething said: “I probably moved faster than I ever have in my life.” Amid more shooting a bullet hit the door of Trooper Kris Hoff’s Jackal.

By now four Jackals had formed a line overlooking the terrorists’ hiding place.

Cpt Lewis gave the order to open fire with the GPMG machine guns but the terrorists kept firing back.

He then ordered his top gunners to fire with their .50 cal heavy machine guns.

Cpt Lewis said: “I couldn’t believe it. Their PKM was still going. That was when I thought the GMG needed to be fired. It was Sgt Humphreys’ suggestion. You always listen to your troop sergeant.”

Sgt Humpreys said: “You knew it was over after that. You could see bushes getting blown over and set on fire.”

By the end of the battle the Brits had fired 614 bullets. When they searched the scrub they found more than 100 spent shell casings.

They also recovered two weapons, more than 100 rounds of unused ammo and a walkie-talkie.

He said: “I am amazed at how brilliant those troops were.”

And in a chilling warning to the terrorists he said the desert was the “perfect terrain” for his light cavalry to operate.

The troops all wear a scorpion on their LRRG badges which is a nod to the legendary Long Range Desert Group which delivered the SAS on its first ever missions in Libya.

THE first British troops to reach one of Mali’s worst massacres told of ditches smeared with blood and homes riddled with bullet holes.

Survivors said at least 60 heavily armed men on motorbikes rounded up the victims, aged between 14 to 40, from the village of Outtagouna and its surrounding areas.

Hundreds of residents had already fled in panic before the peacekeepers arrived and, although the dead had been buried, the evidence of the carnage was everywhere.

Major Harry Willis, the company commander, said: “At first the villagers were scared but after a few days they started coming up to us and telling us what happened.

“They had their sons, brothers, fathers and uncles slaughtered in front of them.”

Corporal Charlie Jones, 28, from The 2nd Battalion The Royal Anglian Regiment, said: “You could still see bullet holes in the doors where they had gone from house to house. What happened was f bad.”

In the nearby hamlet of Karou, gunmen forced their victims to stand beside a ditch before shooting them with assault rifles.

Sgt Shaun Carson, from the Royal Military Police, said: “There had been a notional clear-up but you could see a bloody pile of rocks. You could see a shiny glaze.”

The slaughter was thought to be a revenge attack after two suspected terrorists were arrested in Outtagouna. No one has claimed responsibility for the bloodbath. 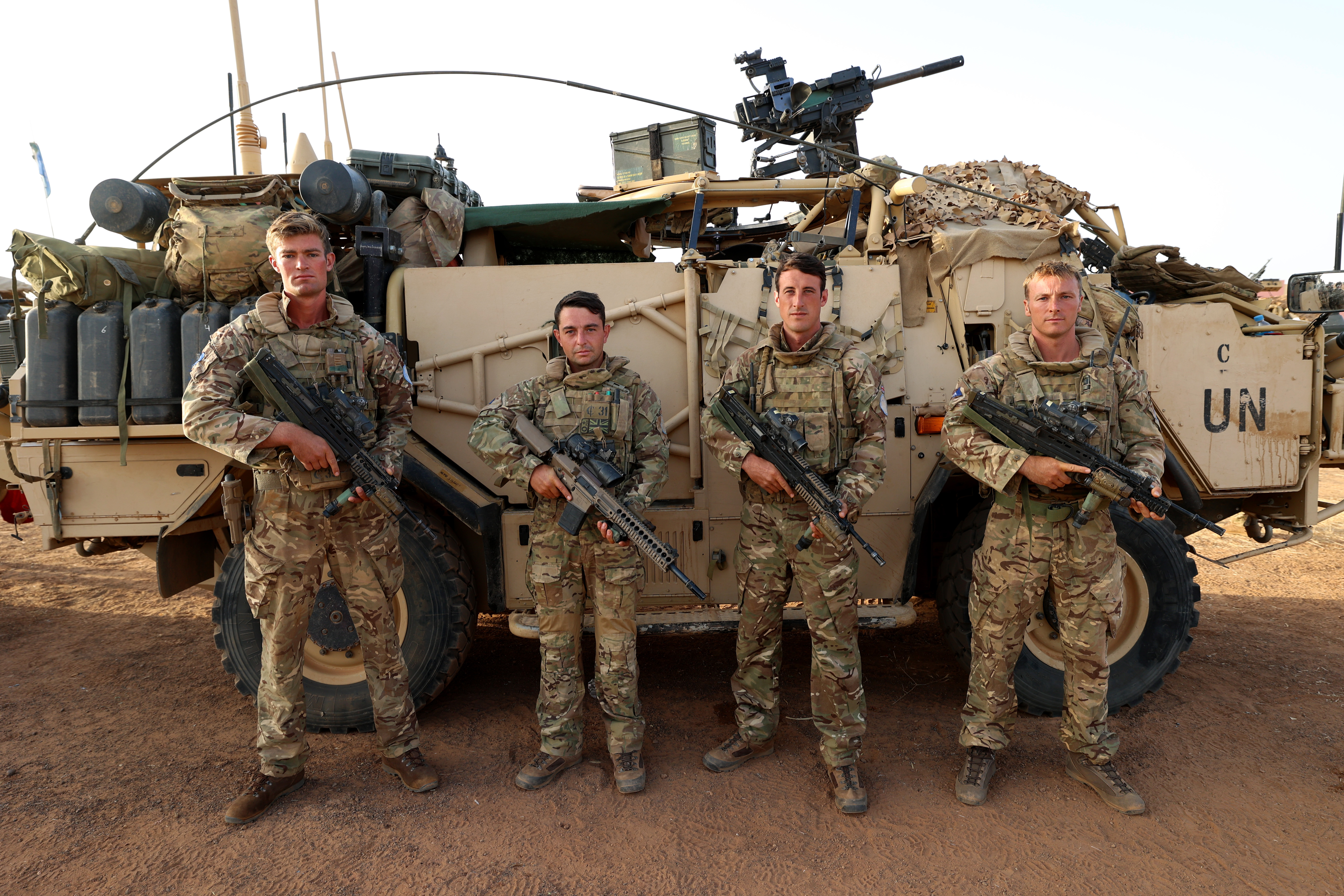 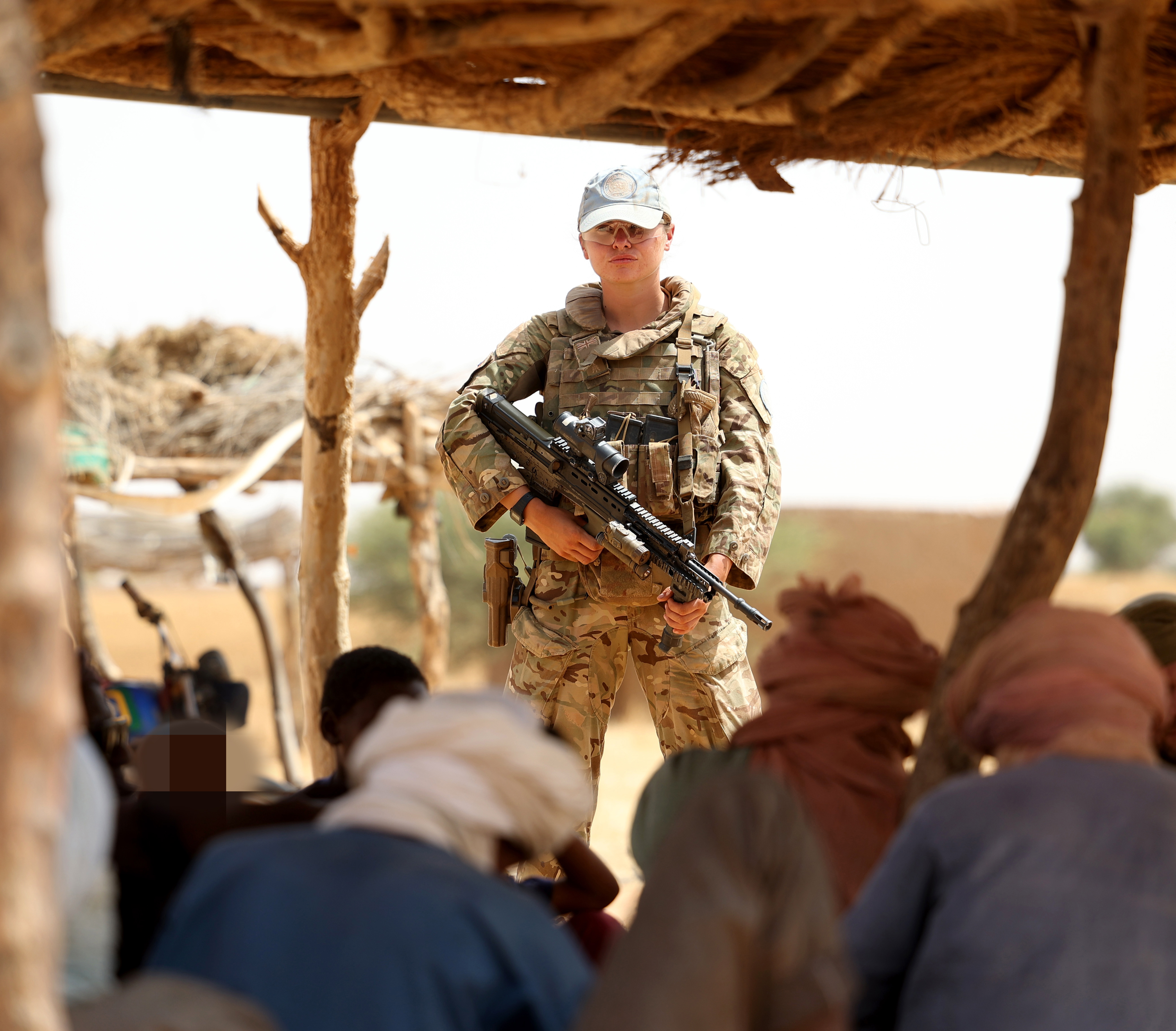 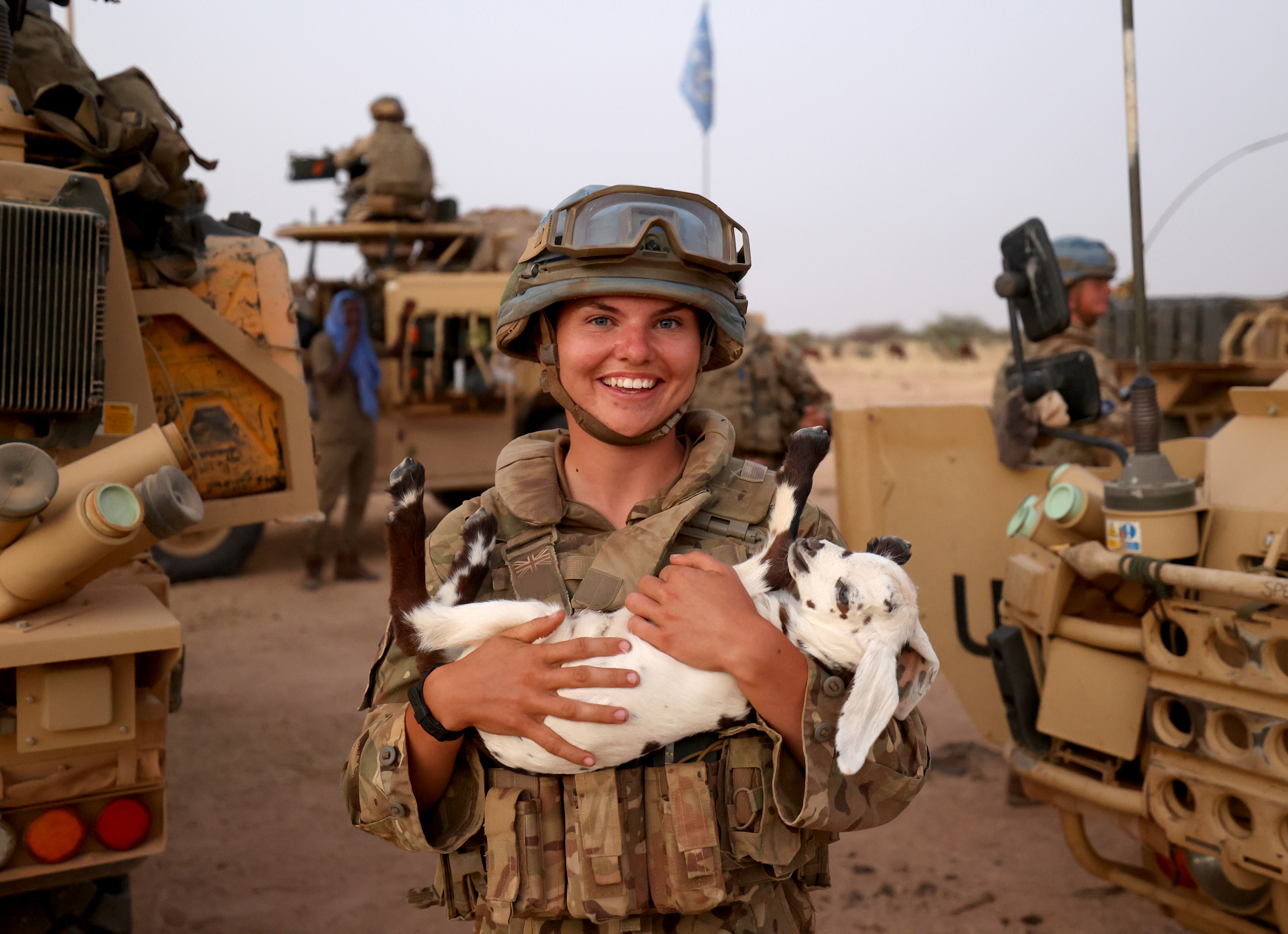 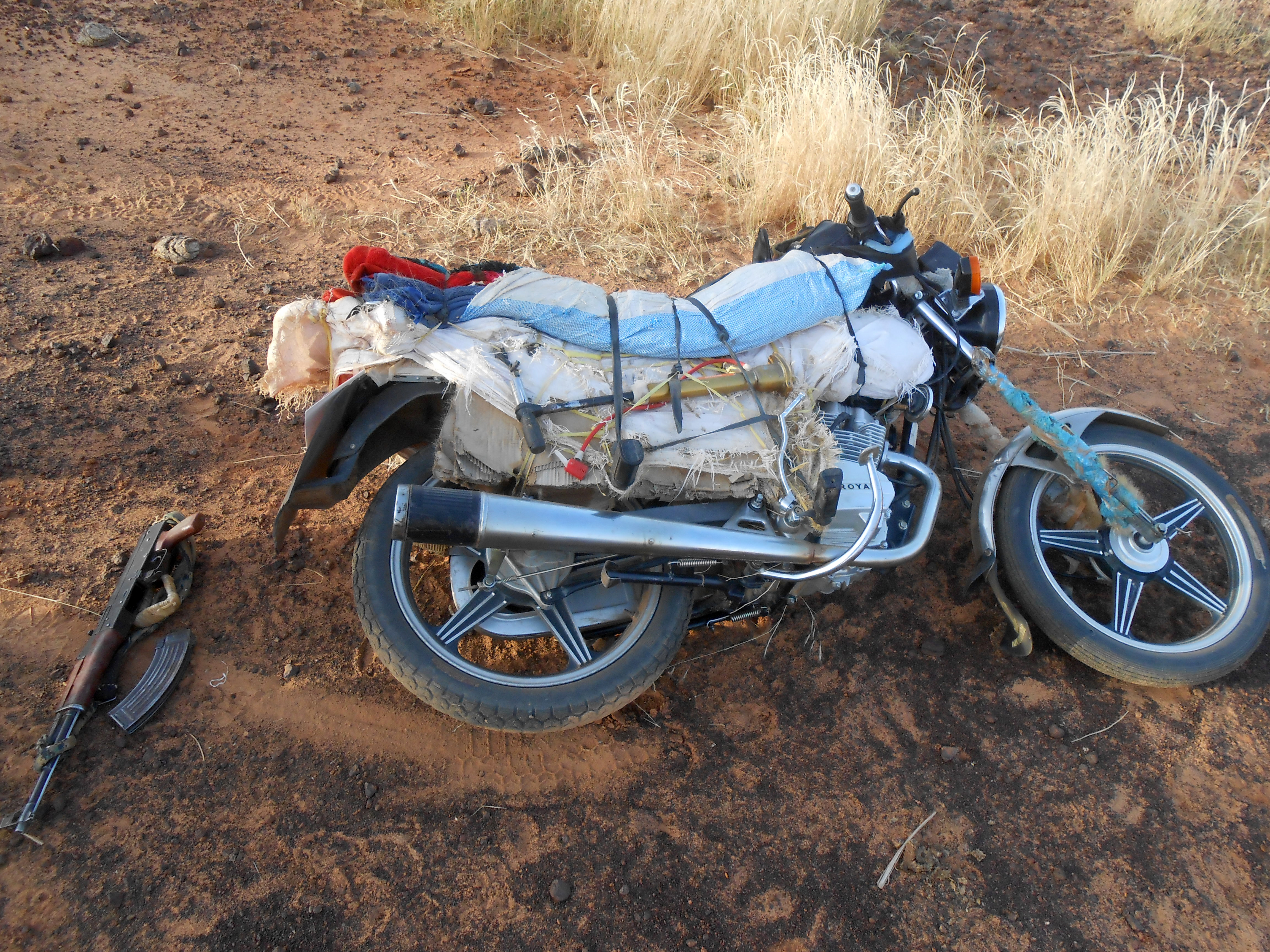 British, crack, on, troops, World
You may also like: