Embattled Met chief Dame Cressida Dick today announced an independent inquiry into her force – but again resisted calls to resign despite a wave of opposition from MPs and campaigners.

The review will look at culture and standards at the Met after it missed a string of opportunities to expose killer cop Wayne Couzens as a sexual predator before he went on to rape and murder Sarah Everard.

The 48-year-old used his police issue handcuffs and warrant card to stage a fake arrest on the marketing executive, 33, before taking her away in his car.

Responding to calls for her to step down following the tragedy and a raft of other scandals, she said today: ‘People will be entitled to their opinion, I’ve got a job to do, I’m getting on with it. My job now is to lead the Met through a difficult time and rebuild that public trust.’ 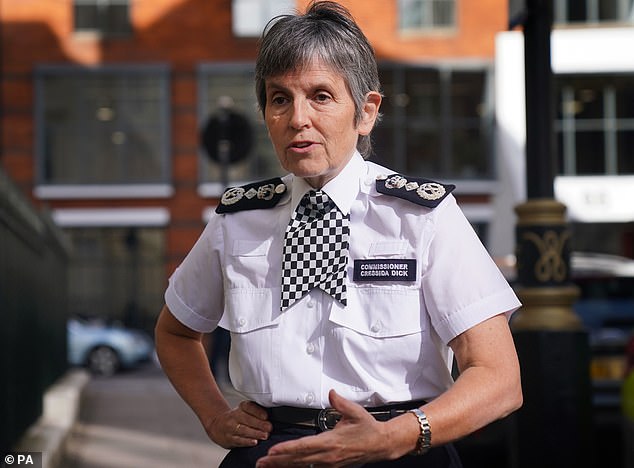 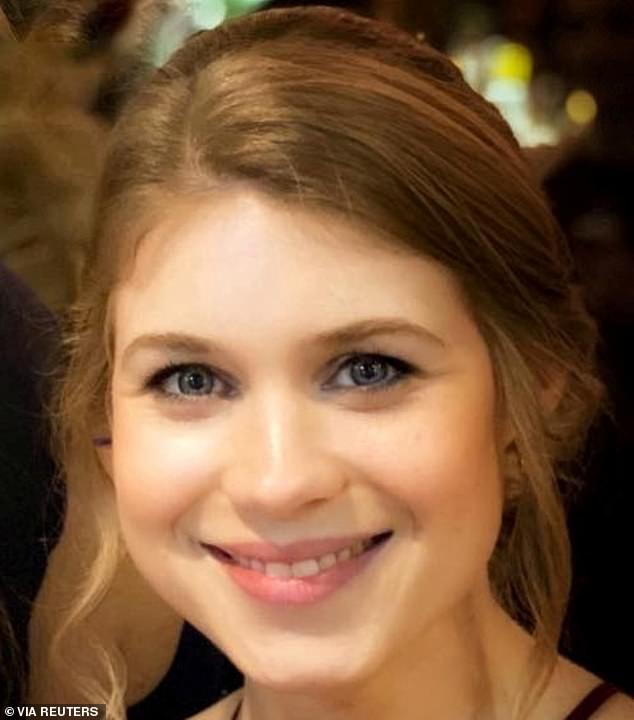 After the killing it emerged that the Couzens was known as ‘the rapist’ by staff at the Civil Nuclear Constabulary because he made female colleagues feel so uncomfortable.

He had been accused of indecent exposure in Kent in 2015 and in London in the days before Miss Everard’s murder, but was allowed to continue working.

Dame Cressida said: ‘These events have been absolutely dreadful. I speak for my colleagues when I say we are furious.

Cressida Dick’s reign as Metropolitan Police commissioner has been overshadowed by controversy over bungled operations and investigations:

1983: She joins the Met as a constable after a brief foray into accountancy.

1993: Becomes a tutor on the accelerated promotion course at Bramshill Police College before transferring to Thames Valley Police as a superintendent.

July 22, 2005: She is the gold commander of an armed terror operation in wake of London bombings which mistakenly shot dead Brazilian electrician Jean Charles de Menezes in Stockwell Tube station. Met guilty of errors including an ‘utterly chaotic’ control room. She is exonerated.

2008: Sir Ian Blair, her mentor, sacked by London mayor Boris Johnson after a string of cock-ups.

2015: Awarded a CBE for services to policing. A damehood follows four years later.

April 2017: Appointed as first female Metropolitan Police commissioner with a brief to modernise the force and keep it out of the headlines.

October 2018: Sir Stephen House, a former boss, appointed deputy commissioner and another chain in the Teflon shield being built around her.

April 2019: Extinction Rebellion protesters bring London to a standstill over several days with the Met powerless to prevent the chaos. Dame Cressida says the numbers involved were far greater than expected and used new tactics but she admits police should have responded quicker.

September 2019: Her role in setting up of shambolic probe into alleged VIP child sex abuse and murder is revealed but she declines to answer questions.

2020: Official report into Operation Midland said Met was more interested in covering up mistakes than learning from them.

February 2021: Lady Brittan condemns the culture of ‘cover up and flick away’ in the Met and the lack of a moral compass among senior officers.

March: Criticised for Met handling of a vigil for Sarah Everard, where officers arrested four attendees.

June: A £20million report into the Daniel Morgan murder brands the Met ‘institutionally corrupt’ and accuses her of trying to block the inquiry. Dame Cressida rejects its findings.

September: Fresh questions about how Met failed to hold Couzens to account for his sexual depravity before he went on to murder Miss Everard.

‘We depend on the trust of the public, we police by consent and I know that public trust has been damaged.

‘People are rightly gravely concerned about what they’ve seen and, as a consequence, today I’m announcing that we will have an independent person come in and review the Met in terms of its standards, and in terms of its culture, how we treat each other, and how we treat the public.

‘Our leadership, our processes, our systems, our people, our training, everything will be looked at.

‘This will be a fully transparent report, it will respond to me, but will, of course, make recommendations for changes, I’m sure, and those will be public.’

She plans to announce who will undertake the review, expected to take at least six months, in about a week’s time.

Yesterday, a retired Metropolitan Police detective accused Dame Cressida of ignoring her warnings about a ‘vulgar and sexist’ WhatsApp group similar to that used by Couzens.

Paige Kimberley claimed she wrote to Dame Cressida shortly after the murder of Miss Everard urging a review of ‘how inappropriate behaviour is addressed amongst contract workers’.

An internal investigation in 2019 took no action against the male officers, saying the messages were ‘distasteful’ but did not amount to criminality or misconduct.

Earlier today, Boris Johnson told broadcasters in Manchester that there is now ‘a massive job’ to do to restore women’s confidence in the police.

The Prime Minister said: ‘What we can certainly conclude from the Wayne Couzens case and what happened there is that there is a massive job of work to do to give women the confidence that they need.

‘But what we need to do is do some things to make the streets safer and we are investing massively in CCTV and street lighting and those sorts of things, but also make sure we change the culture of policing.’

He also called for crimes to be dealt with more quickly and for a boost in the recruitment of female police officers.

Home Affairs Select Committee chairwoman Yvette Cooper accused the Government of ‘burying its head in the sand’ over violence against women and girls as she called for an independent investigation into the vetting process used by the Metropolitan Police when recruiting officers.

The Prime Minister has already said that investigations by the Met and police watchdog the Independent Office for Police Conduct (IOPC) should be allowed to proceed and rejected calls for an immediate public inquiry.

Speaking to BBC Radio 4’s Today programme, Ms Cooper said: ‘Sarah Everard was murdered by someone she should have been able to trust, who abused his power as a police officer.

‘We do need a proper, independent inquiry into how that could happen, how such a dangerous man could serve as a police officer for so long, why earlier problems weren’t investigated, how he could be cleared to use firearms, but also more widely into the scale of failings in vetting and safeguarding, in culture and in attitudes to violence against women and girls within policing.

‘I’m really worried that the Government is just burying their heads in the sand. The Prime Minister has to stop the denial of this about quite how serious it is and actually set out an independent inquiry into this case.’

In a statement following Couzens’ sentencing, the Met said: ‘Vetting is a snapshot in time and, unfortunately, can never 100% guarantee an individual’s integrity.

‘Vetting is one of a number of activities that we undertake to preserve the integrity of our organisation and it is only as good as the day on which it is carried out.’

It added that officers are re-vetted periodically, there is a confidential number and a directorate of professional standards to report officers’ wrongdoings, and internal and external inspections take place to scrutinise the force’s processes.

Dame Cressida has been at the centre of a series of scandals before and after being appointed as the Met’s first female commissioner in 2017.

In July 2005 she was in overall charge of the operation which saw electrician Jean Charles de Menezes, 27, shot dead on a Tube train in south London.

Mr de Menezes, a Brazilian working in the capital, was blasted in the head seven times by police at Stockwell station after being followed by officers from his home nearby. 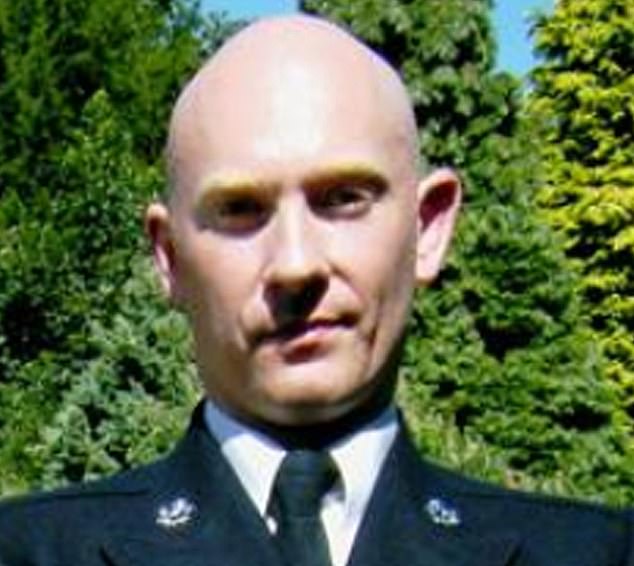 Couzens, who was handed a rare whole life term by a judge last week

Innocent men, including the late Lord Brittan and former Tory MP Harvey Proctor, were pursued by the force.

In 2017 Dame Cressida was criticised for her choice of words after she said the victims of the London Bridge terror attack demonstrated London’s ‘diversity’.

The officer added: ‘We believe, of course, that that’s what makes our city so great. It’s a place where the vast majority of time it’s incredibly integrated and that diversity gives us strength.’

Critics said the remarks were ill-considered.

In 2019 the Met under Dame Cressida’s leadership was widely criticised for its ‘light-touch’ policing of Extinction Rebellion protests.

The environmental demonstrators were allowed to blockade key areas of the capital for days, including Westminster Bridge and Oxford Circus.

In total a dozen officers from across the constabularies are under investigation by the IOPC over offences related to the Couzens case.