The Biden White House is being forced to confront its first major foreign policy crisis with the week-long violence in Israel and Palestine. The conflict has cost over 230 lives, the vast majority in Palestine.

Biden came into office without any grand plans to reshape the Middle East. His main focus has been on strategic competition with China, rebuilding America’s alliances in Europe and mobilising international action on climate change. 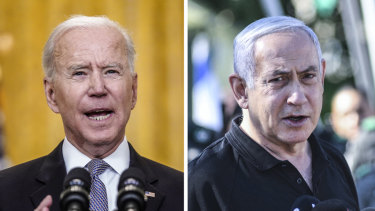 At odds over ceasefire: Joe Biden and Benjamin Netanyahu.Credit:AP

The consensus in Washington is that – with Hamas in power in Gaza and Benjamin Netanyahu struggling to hold on power in Israel – there is next to no hope of achieving meaningful progress towards a two-state solution anytime soon and it would be foolish to waste political capital on the issue.

But presidents do not get to choose which events they must respond to.

During his career as a centrist Democrat in the Senate, Biden was a fierce defender of Israel.

His first overseas trip as a senator was to the country, where he met then-prime minister Golda Meir. He has described it as “one of the most consequential meetings I’ve ever had in my life.”

But during the Obama-Biden years, there was a significant fraying in the US-Israel relationship.

Obama was angry at Netanyahu for pushing ahead with settlements in the West Bank while Netanyahu loathed the US nuclear deal with Iran. In 2016 Biden said the direction Israel was headed in was causing “overwhelming frustration with [Netanyahu’s] Israeli government.”

While the US remains Israel’s most important ally, the political dynamics are significantly different than they were in past decades. 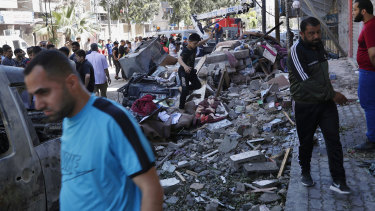 People in Gaza City inspect the rubble of the Abu Hussein building that was hit by an Israeli air strike early on Wednesday morning. Credit:AP

But progressives like Bernie Sanders and Alexandria Ocasio-Cortez wield increasing influence in the party and are far more sympathetic to the Palestinian cause. Biden has to balance these competing views. 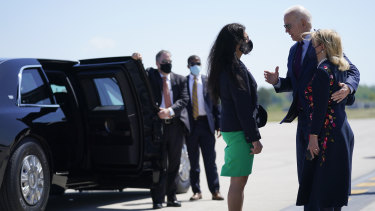 President Joe Biden speaks with Representative Rashida Tlaib, one of the progressive members of the Democrats who opposes blind support for Israel. Credit:AP

Biden initially expressed conventional support for Israel last week, saying the country has a right to defend itself against Hamas’s rocket attacks. The US has also blocked any statement from the United Nations Security Council on the issue.

But in recent days Biden’s language has been changing.

In a telephone call with Netanyahu yesterday, he said he supported a ceasefire.

Today he was even more emphatic, saying he wanted to see a “significant de-escalation” in the violence by the end of the day. Netanyahu has so far rebuffed those demands, saying he was “determined to continue this operation until its aim is met”.

We’ll see in the coming days if Biden behind-the-scenes diplomacy pays off with a reduction in the violence, or if the bloodshed continues, putting the US-Israel alliance under even greater strain.

Matthew Knott wrote this for our latest edition of the What in the World newsletter. Get it delivered to your inbox every Thursday here.