The body of assassinated president Jovenel Moise was laid to rest in his hometown in Haiti today amid heavy security after days of protest in the Caribbean nation.

Pallbearers in military attire carried the late president’s body in a closed wooden coffin as his funeral took place two weeks after he was shot dead at home in a killing still shrouded in mystery.

His widow Martine arrived to cries of ‘Justice! Justice!’ as she headed straight to her husband’s casket, climbing the stairs and stopping in front of it. Her right arm in a sling, she lay her left arm on the casket and then brought it to her heart as she stood there in silence. Her eyes filled with tears as her three children joined her.

Minutes later, a group of supporters grabbed a large portrait of Moïse and paraded with it as the police band began to play the national anthem over loud wails.

Earlier, cries of ‘Assassin!’ filled the air at the arrival of Haiti’s National Police Chief León Charles. Haitians clad in somber suits, shiny shoes and black and white formal dresses shouted and pointed fingers at the neighboring seating platforms where Haitian officials and foreign dignitaries sat above at least a dozen men with high-powered weapons.

‘You didn’t take any measures to save Jovenel! You contributed to his killing!’ one woman yelled.

On the grounds below, one Moïse supporter threatened Charles: ‘You need to leave now or we’re going to get you after the funeral!’ 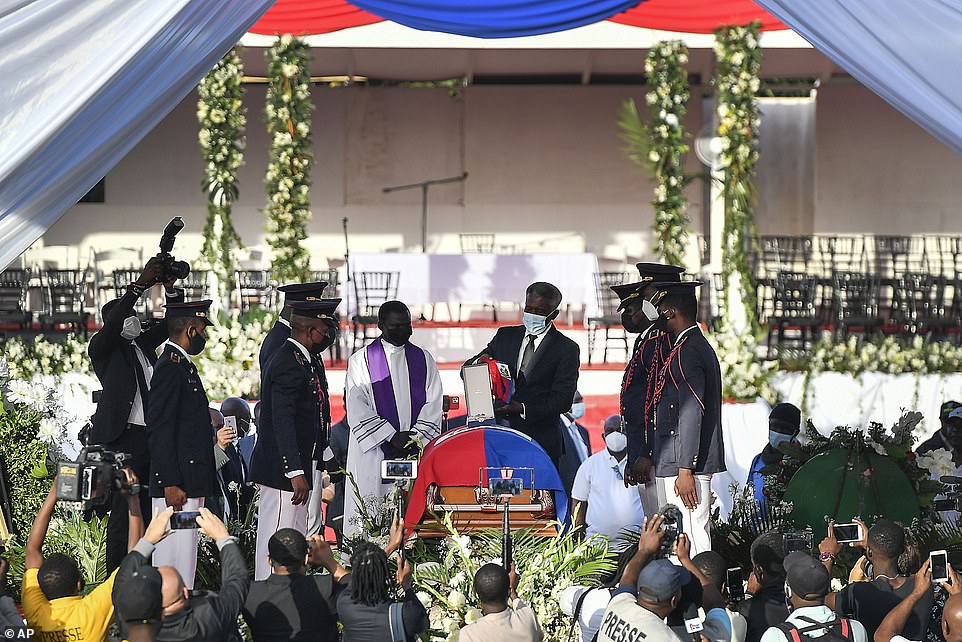 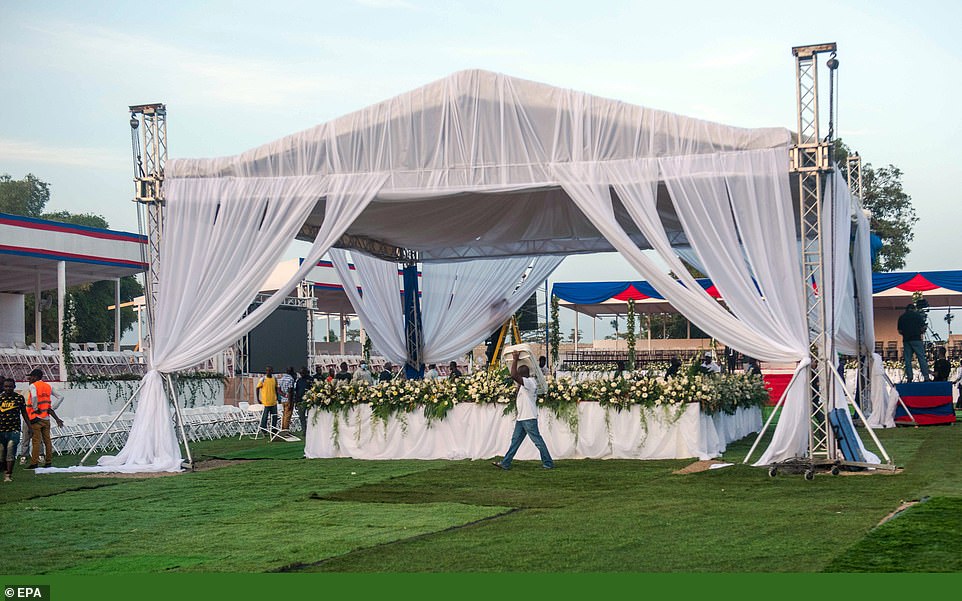 Foreign dignitaries including U.S. President Joe Biden’s top advisor for the Western Hemisphere flew to Cap-Haitien to pay their respects 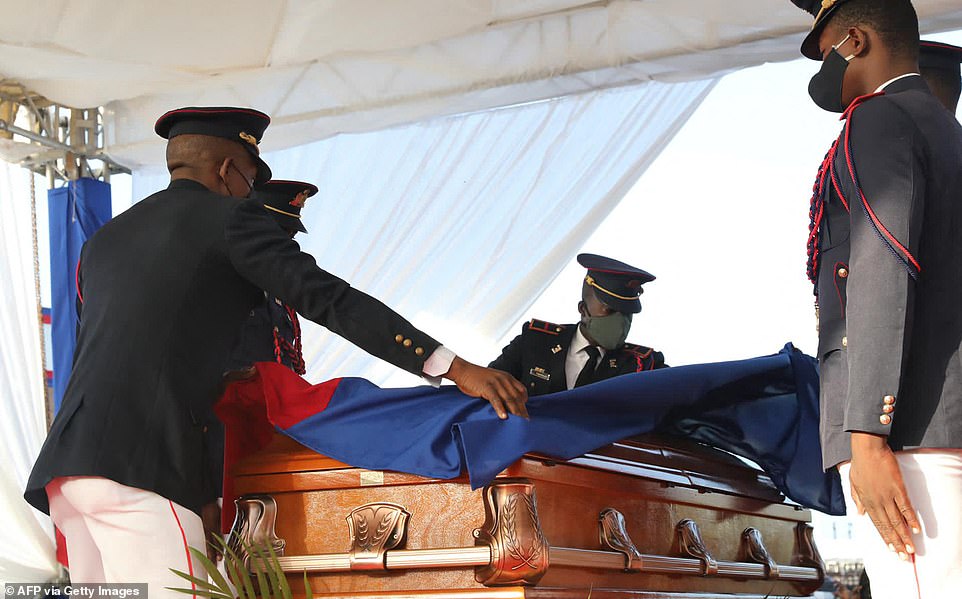 Moise was gunned down in his home in Port-au-Prince before dawn on July 7, setting off a new political crisis 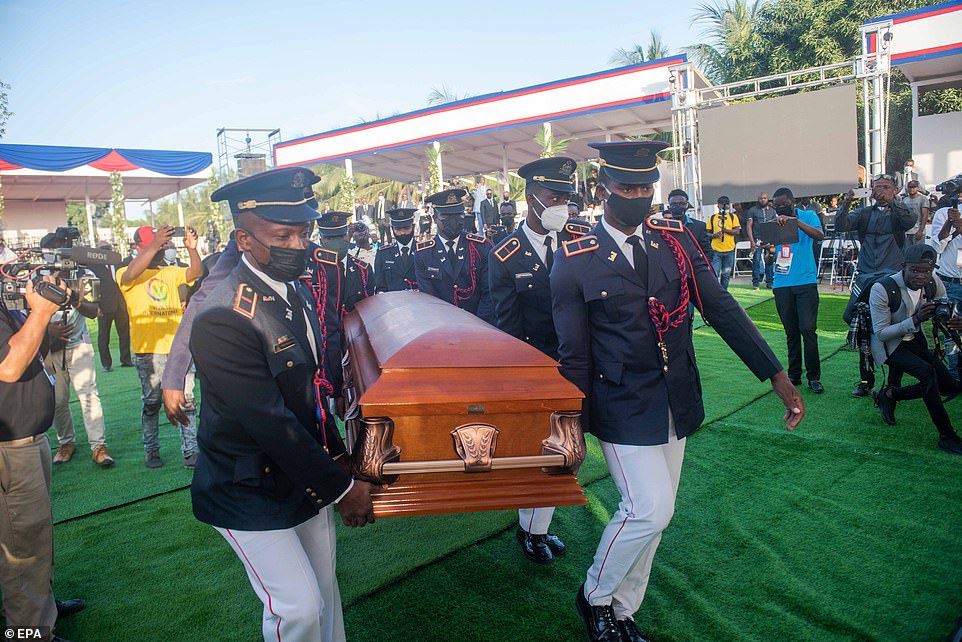 Protests by angry supporters of Moise convulsed the slain leader’s hometown, the northern city of Cap-Haitien, for a second successive day on Thursday as workers prepared for the funeral

Moise was gunned down in his home in Port-au-Prince before dawn on July 7, setting off a new political crisis in the Caribbean country that has struggled with poverty, lawlessness and instability.

Protests by angry supporters of Moise convulsed the slain leader’s hometown, the northern city of Cap-Haitien, for a second successive day on Thursday as workers prepared for the funeral.

The protesters set tires on fire to block roads, while workers paved a brick road to Moise’s mausoleum on a dusty plot of several acres enclosed by high walls.

Set on land held by Moise’s family and where he lived as a boy, the partly built tomb stood in the shade of fruit trees, just a few steps from a mausoleum for Moise’s father, who died last year. Police controlled access to the compound through a single gate. 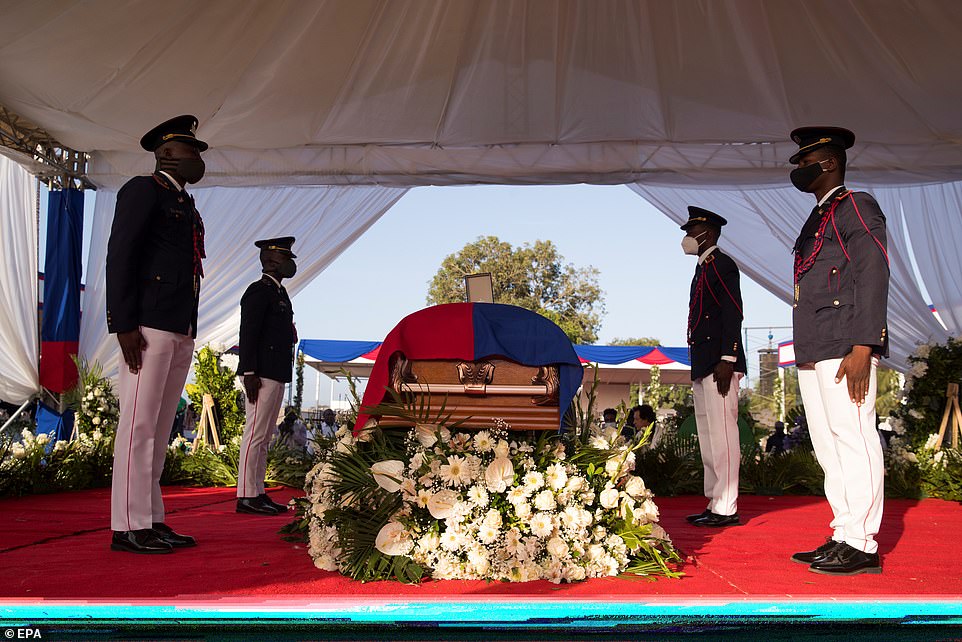 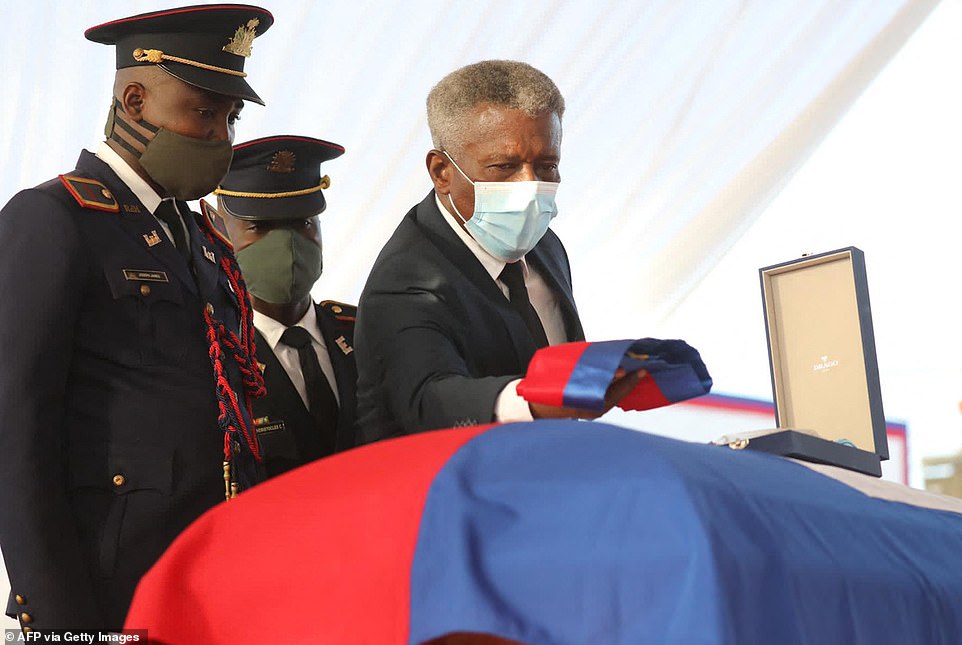 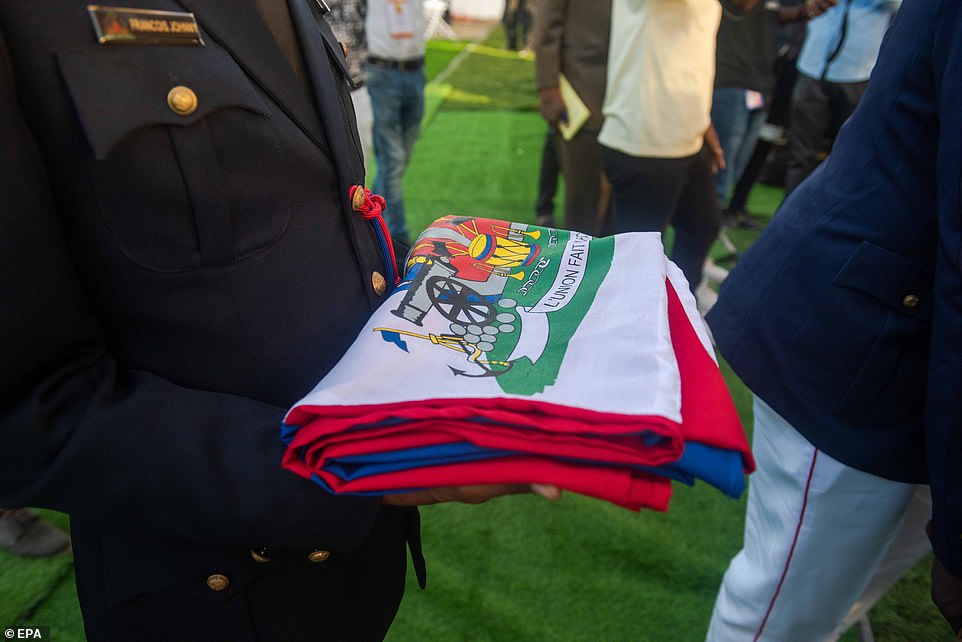 A soldier carries a Haitian national flag before it is placed on the coffin with the body of President Jovenel Moise, during the start of his funeral ceremony 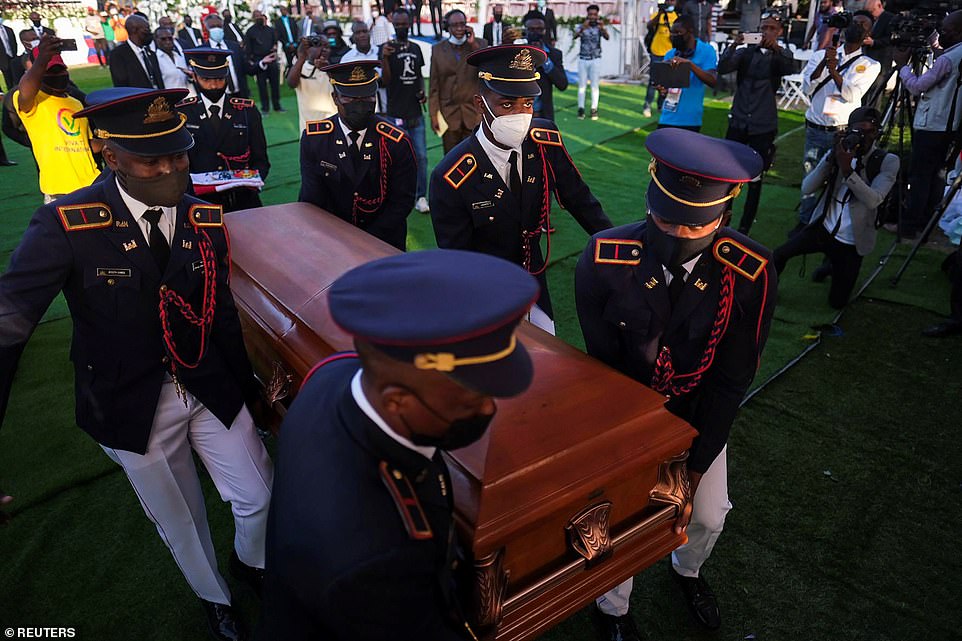 The assassination was a reminder of the ongoing influence foreign actors have in the poorest country in the Western Hemisphere despite it becoming Latin America and the Caribbean’s first independent state at the start of the 19th century.

The attack was carried out by a group that included 26 Colombian former soldiers, at least six of whom had previously received U.S. military training. Haitian-Americans were also among the accused.

The attack’s plotters disguised the mercenaries as U.S. Drug Enforcement Administration agents, a ruse that helped them enter Moise’s home with no resistance from his security detail, authorities have said. At least one of the arrested men, a Haitian-American, had previously worked as an informant for the DEA.

The turmoil has pushed Haiti up Biden’s foreign policy priorities and on Thursday the State Department named a special envoy for the country. Biden has rebuffed a request by Haiti’s interim leaders to send troops to protect infrastructure. 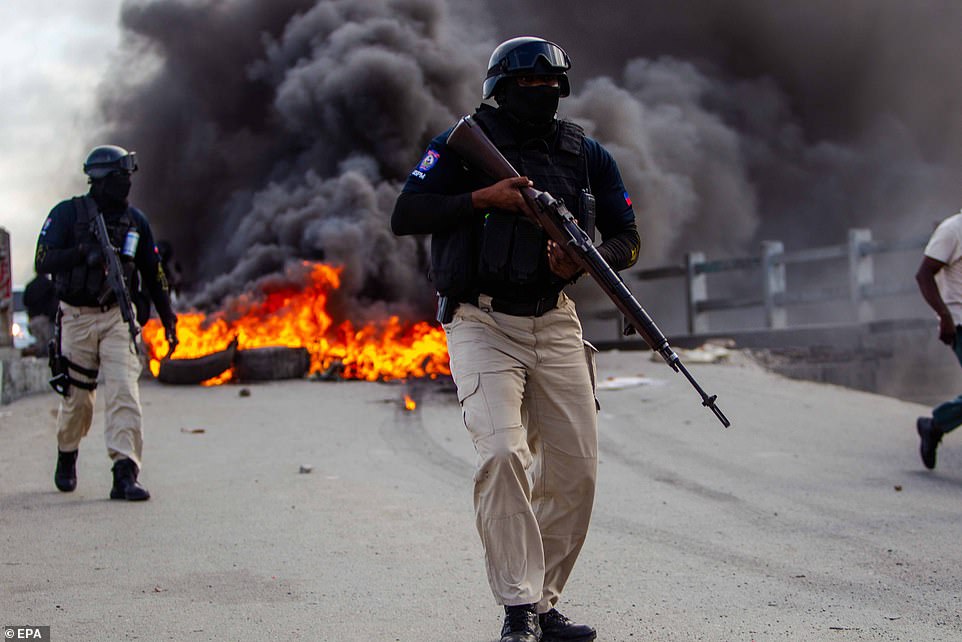 Police officers confront protesters during a day of demonstrations, in Cap-Haitien on the eve of Jovenel Moise’s funeral 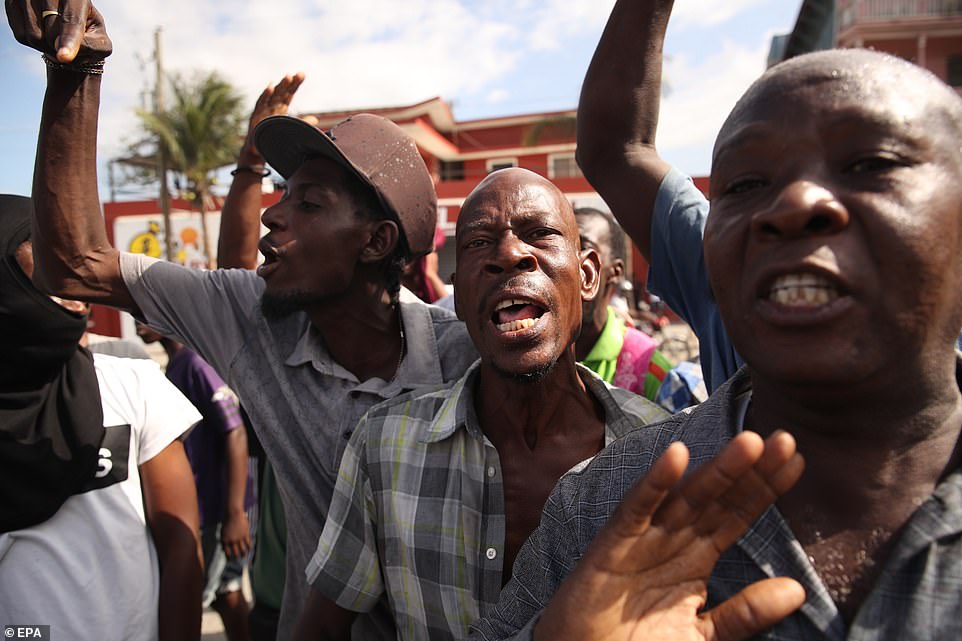 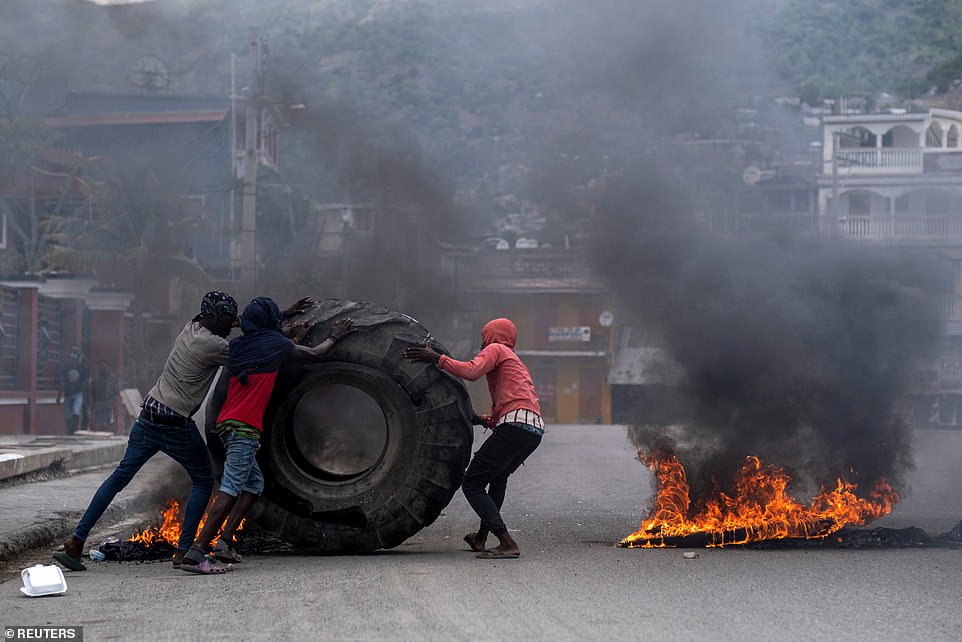 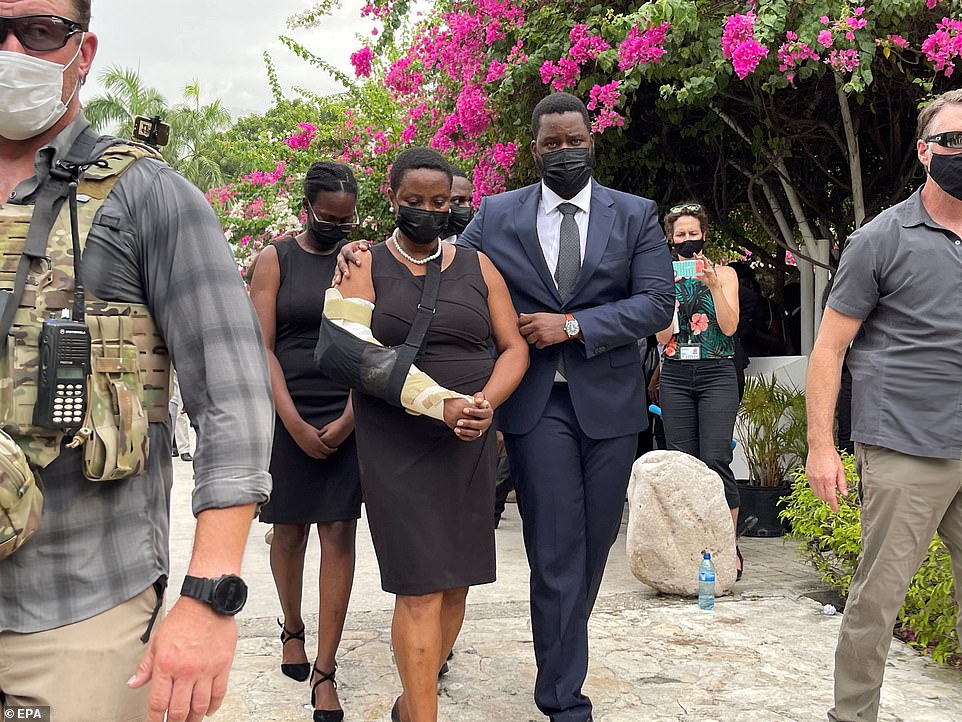 Martine Moïse, 47, appeared in public with her three children for the first time since her surprise return to Haiti on Saturday

Helen La Lime, Special Representative of the UN Secretary-General for Haiti, was among the guests.

A former banana exporter, Moise failed to quell gang violence that surged under his watch and he faced waves of street protests over corruption allegations and his management of the economy.

However, the demonstrators in Cap-Haitien were venting anger over the many questions that remain unanswered about the assassination, including who planned it and why.

Banners celebrating Moise festooned buildings along the narrow streets of Cap-Haitien’s old town, with proclamations in Creole including, ‘They killed the body, but the dream will never die,’ and ‘Jovenel Moise – defender of the poor.’

&apos;, crowds, mourners, of, shout
You may also like: