Cutting losses in Afghanistan is the sensible thing to do

The Biden administration’s decision to withdraw the last 2500 US troops from Afghanistan is a blow to the prestige of the United States and its allies, but this is a case where it is better to admit failure and move on.

The US and its allies invaded the Central Asian country in 2001 with the goal of overthrowing the Taliban regime and evicting the al-Qaeda terrorists who used Afghanistan as a haven from which to orchestrate the September 11 attacks. That was arguably a righteous goal, but it was achieved within weeks. In the two decades since, it has grown increasingly hard to understand what we were fighting for. 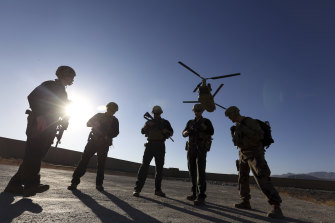 American soldiers wait on the tarmac in Logar province, Afghanistan, in 2017.Credit:AP

The mission crept from fighting terrorism into pacifying and then rebuilding an ethnically fragmented and impoverished country. At the peak of troop deployment, more than 130,000 US, NATO and Australian troops were sent to the country in an attempt to achieve the mammoth task of nation building. But despite that enormous effort, the Taliban still controls large sections of the countryside and Afghan democracy barely extends outside the capital, Kabul, and a few big cities.

It is always hard to admit failure. Prime Minister Scott Morrison, who said Australia would withdraw its last 80 troops, defended the 20-year war on Thursday, saying, “Freedom is always worth it.” Yet many will question whether the heavy price paid for this failure of arms and foreign policy was really justified. At least 41 Australian soldiers have died and 261 have been wounded. Hundreds of thousands of Afghan civilians have been killed and the war displaced millions, sending some of them Australia’s way in leaky boats.

The lengthy war against an often hostile population has also taken a heavy toll on the morale of Australian soldiers. It contributed to the brutal climate that resulted in allegations that war crimes were committed by some of our elite SAS troops, allegations that were exposed in The Age and documented by the Brereton report.

The decision to withdraw is not without risks. Hawks in the US and Australia are warning rightly that the Taliban could grow stronger and even take power. After September 11, when the withdrawal is due to be complete, Afghanistan could once again become a haven for terrorist groups opposed to the West, such as Islamic State and al-Qaeda. These concerns made former president Donald Trump change his mind after he proposed withdrawal last year.

But there are better ways of containing those risks than garrisoning a country of 38 million in perpetuity. The threat of Islamist terror has not disappeared, but the long battle in Afghanistan has proven, if nothing else, that counter-insurgency is difficult, expensive and even counter-productive.

If the West is to stay true to its principles, it cannot stop supporting its allies in Afghanistan who are still fighting for democracy. But it can do so by providing military, technical and economic support. It should reach out to neighbouring countries, including China, which has no reason to favour an Islamist, unstable Afghanistan.

It has taken us too long to admit that the war was unwinnable and drop the pretense that we could remake the country in our own image. Withdrawal will allow Australia and the US to redeploy resources to other foreign policy and security challenges such as China’s growing assertiveness in the Indo-Pacific. It is something Barack Obama once talked about but failed to do.

Australia and the US must shift their focus from fighting Afghan farmers armed with rifles to strengthening their defences against cyber-attack and deterring Beijing’s military build-up in the South China Sea and its economic coercion throughout the region.

The US, Australia and its allies must accept that the balance of risks in the world has changed and craft a new approach.