Cycling through the night, Abdullah aims for 24-hour world record

Abdullah Zeinab acknowledges what he’s aiming to do is scary.

For most people, getting on the bike for more than an hour or two at a time shows decent fitness. But riding 24 hours straight at a pace close to the speed limit of a suburban street?

That’s exactly what Abdullah will be doing at the Ford testing track in Lara from 4pm on Sunday until 4pm on Monday. His goal: the world record for the most distance covered on a bike outdoors in one day.

To get there, the 27-year-old ultra endurance athlete will need to beat the mark of 915.39 kilometres set by Luxembourg cyclist Ralph Diseviscourt last year. That’s an average pace of 38.14km/h.

“I’ve always wanted to see what would be possible in 24 hours if you had all the right equipment, the right track,” he says. “I’ve always had in the back of my mind ‘what am I capable of?’.”

Abdullah is no stranger to long distance cycling. Two years ago, he won the US Trans Am Bike Race, an amateur competition where unsupported riders cover almost 6800 kilometres in the shortest time possible.

He completed the race in 16 days, 9 hours, and 56 minutes. He says that was nothing compared with what he’s attempting this weekend.

For added motivation, Abdullah is raising money for the Masaka Cycling Club in Uganda. His goal is $24,000, which will be put towards a clubhouse where riders can train using the online cycling program Zwift. 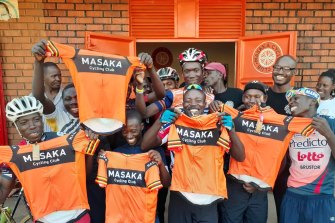 The Masaka Cycling Club in Uganda

Abdullah says Zwift has become a tool for professional cycling teams to identify racing talent across the world, as riders upload their stats in real time. He wants African athletes to have the same opportunities to reach the top of the sport as those in wealthier countries.

“If I just sit in the front lounge room and think about 930 kilometres I almost have an anxiety attack,” he says.

“But in those moments of focusing on Masaka, I get a voice in my head saying ‘you don’t know what’s possible in 24 hours’.”

To train for his attempt, Abdullah has been doing six-hour rides at roughly the pace he’ll need on the day. He says the Ford track’s 4.8 kilometre circuit is perfect, with around 191 laps needed to beat the record.

He will have a device on his bike to make sure he’s on pace, but he won’t check it.

“It’s quite a debilitating thing to look at your speed,” he says. “It’s a constant reminder that you’re riding in a circle for 24 hours.”

When he’s on the Ford track, Abdullah will have two support cars behind him keeping track of his fluid and energy intake. Decisions about when to have food or water will be taken out of his hands.

“There’s no wriggle room to not eat the proper amount,” he says.

It’s not physical fatigue but mental tiredness that is Abdullah’s biggest concern. With that in mind, he’s built in a small rest period just after sunrise on Monday to make him feel like he is starting a new day.

It won’t be long, just one minute. But he hopes it will be enough to give him the boost he needs.

“I will pull up, there will be a table ready, the mechanics will do what they need to with my bike. I will get on the table, have a doona pulled over me and an eye mask over my eyes,” he says.

“My mum will say ‘good night’. Maybe 30 seconds after that, I’ll get up slowly and she’ll say ‘wow it’s a new day, you look really refreshed’. I’ll have the same breakfast I have every day.”

It’s all about keeping the mind from thinking about the reality of what his body is being put through, he says.

“It’s constantly eliminating the fact that you’ve been on that track,” he says. “The mental fatigue can destroy you.”

For those who want to keep track of Abdullah’s ride, they can do so through his Instagram page where updates will be provided regularly.

Abd, cycling, night:, the, through
You may also like: