Cyclist smashes face-first into pavement after weaving across road

This is the moment a cyclist was sent flying off his bike after snaking across the road and crashing into the pavement.

Truck driver Carl Shearing, 60, filmed the male cyclist as he veered into the opposite lane before smashing into the kerb in Devon last week.

Mr Shearing said the cyclist, who was not wearing a helmet,  ‘got a good dose of karma’ after failing to pay attention to other road users while slaloming down the road in Crediton.

Dash cam footage shows the cyclist steering erratically and taking up the whole of the lane, leaving no room for motorists to pass.

At one point he ends up in the other lane before pulling back in front of the lorry.

The biker, who has a fully loaded rucksack on his back, then turns to make hand gestures towards Mr Shearing.

But as he turns to look back at HGV he loses control of his bike and ends up heading towards the pavement before crashing into the side of the curb, sending him hurtling over his handlebars.

Mr Shearing, who shared the footage on Facebook last Thursday, can be heard laughing as he drives past the cyclist.

He captioned the footage: ‘Sometimes there’s nothing better than a good dose of karma.’

Thousands of viewers have also commented on the post saying the cyclist ‘got what he deserves’.

Aindriú Ó Braonáin said: ‘You showed great restraint not beeping the horn to be fair.’

Gilly Anne Nicholson added: ‘Got what he deserved, stopping traffic passing. What a clown!’ 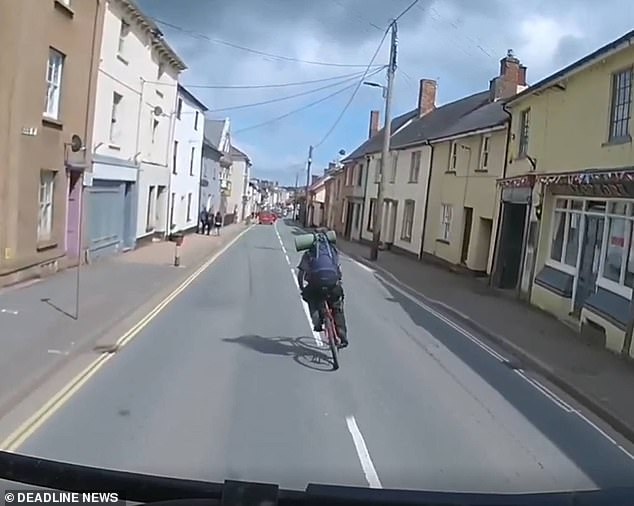 In dash cam footage shared online by truck driver Carl Shearing, 60, the cyclist can be seen snaking across the road before briefly veering into the next lane

Speaking today Mr Shearing added: ‘I was driving through Crediton on my way back to my yard. I saw in the distance a cyclist weaving all over the place.

‘I could see well before I came up behind him that he was swerving all over the road and paying no attention to anyone else on the road.

‘It’s not a wide road in Crediton and there is a set of traffic lights right by a very busy school.

‘It was kicking out time so there were a lot of school children about so it was not possible to pass this pillock on a bike.

‘I was following him at a respectful distance when he started making some hand gestures to me, I have no idea what he was trying to say.

‘When he turned back around to look at where he was going he clipped the kerb and off he went.

‘I checked my mirrors to make sure he didn’t roll back under my truck then, as you heard, I laughed.

‘As truck drivers, we spend all day fending off idiots who shouldn’t be on the road and if something happens it always gets blamed on us – well not this time!’